In 2015 Jaquet Droz released the Grande Seconde Morte (aka ‘Deadbeat Seconds’ in English) in a limited edition model with an ivory-coloured enamel dial. A year later at Baselworld 2016 they followed up with two black dial versions in stainless steel (onyx) and rose gold (black enamel), and it is the former that we are sharing with you today.

A deadbeat second complication is one that is unusual enough that when one is made it is definitely made note of, but also one that seems to have been undergoing a small resurgence (insomuch as a niche complication can have a resurgence) in recent years in wristwatches, even by major brands such as Jaeger-LeCoultre. This is a complication that although not strictly for the more watch geeky, is probably nonetheless more directly aimed at them, with the appeal of a quartz-like tick of the seconds hand something that those who are keen on precision as well as technical movement complexity, find engaging.

With three different hands situated in three different positions, the dial is chracteristically JD, with the ‘8’ type look. The length of the seconds hand is also longer than than the norm, which does mean that it grabs your attention a lot more. All the hands are rhodium-treated, but in an unexpected bit of ‘luxe’ to the stainless steel model, applied ring is white gold. 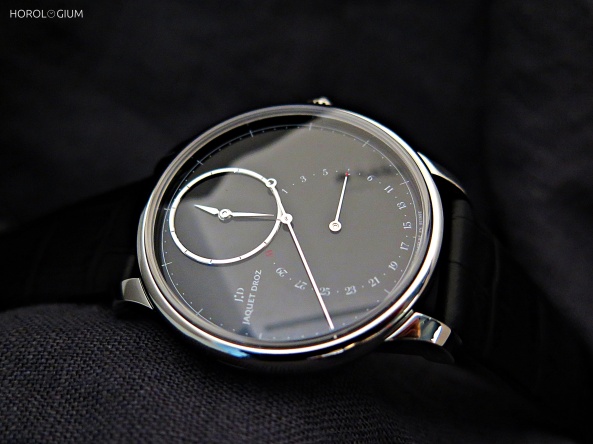 In terms of the date function, it uses a retrograde hand, something that those of you who are more familiar with watches will be able to ascertain at a glance, with a small red varnished tip at its end.

Visible through the stainless steel 43mm case is the automatic Jaquet Droz calibre 2695SMR with a 38 hour power reserve along with a silicon balance spring, pallet horns. You will also notice that there’s an individual serial number engraved on the case back.

I’m one of those people who like the Jaquet Droz ‘8’ styled dials, and the layout of the Grande Seconde Deadbeat is one that appeals to me, including the extra long hand (I mention this because I recognise that there are many with quite strong opinions about hand length), which works because it is so thin; a thicker long hand would hav been too visually ‘harsh’.

Glossy, shiny and really rather elegant, this, along with its rose gold (I prefer this model) sibling are
nice additions to the Grande Seconde Deadbeat range (the fourth iteration is stainless steel with a silver opaline dial and blued hands). I think my two favourites are the model I have featured here, and the ivory enamel limited edition model from 2015, but with these new models it gives hope to fans of this complication that there is a mini Renaissance and that they now have more options from which to choose.

Like Loading...
‹ THE BEATLES : Raymond Weil’s latest musical adventure
ANGELUS : From the U10 Tourbillon Lumière to the U40 Racing Tourbillon ›