Having read on QP about a new Panerai Radiomir 1940 to be launched at Watches & Wonders 2014, I made a beeline for the booth on day one, and found the new 45mm PAM572 and PAM573 with the P.4000 micro-rotor Calibre. Big chunky tool watches going slim? What is happening to the watch world? Is it turning on its axis? Innovation and development, that’s what’s happening.

In recent years Officine Panerai has recognised that there is a demand for smaller Radiomirs, and introduced smaller models such as the 42mm PAM512 also in a 1940 case, and with which this new PAM572 has been superficially (and by that I mean dial aesthetics) compared, or for those who like the non-1940 case, the PAM380 for example, which is 45mm. 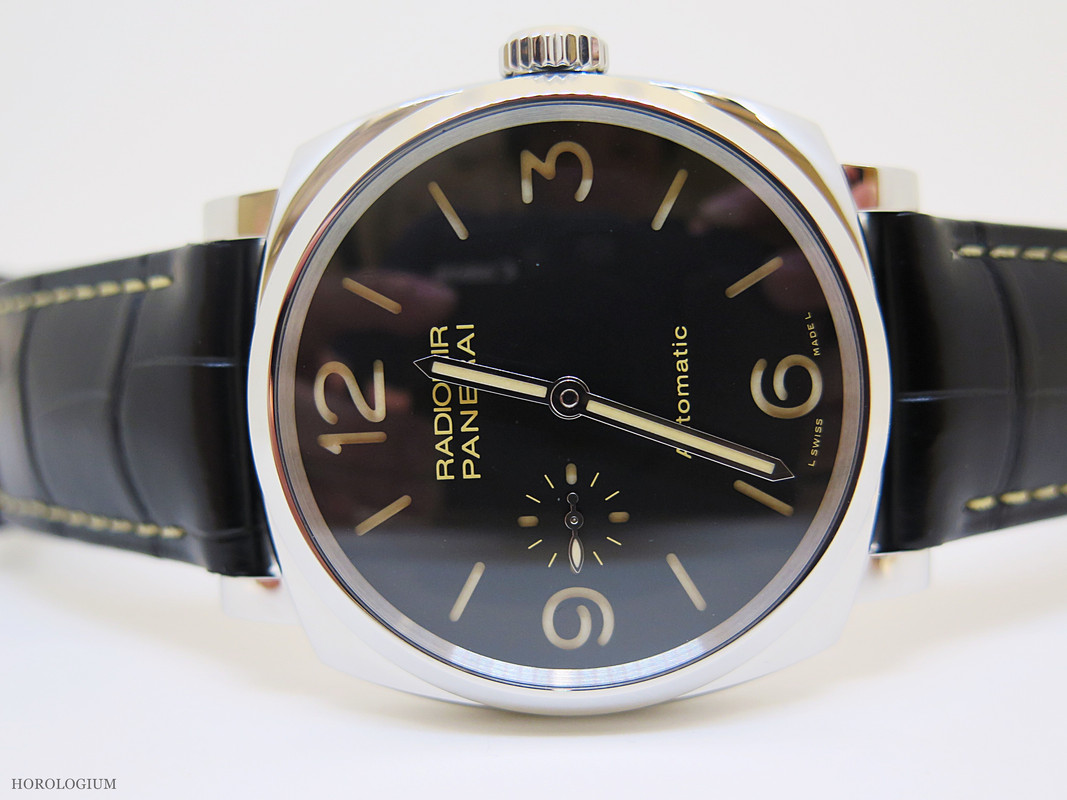 What is so special about the new PAM572 and PAM573 (the latter a RG ‘Oro Rosso’version)? Well inside this new 3.95mm thick 45mm case is Officine Panerai’s first automatic movement with a micro-rotor. Watch people get excited about micro-rotors for a myriad of reasons to do with slimness, technical achievement, and aesthetics; there is no right/ wrong reason, but there is little doubt that they are attention-grabbers and attractive to many people. The new movement is also part of the first automatic Radiomir 1940.

The P.4000 is the latest in OP’s in-house developed movements and will allow modules to be added to the basic form, so let your imagination run a bit wild about what might appear in the next few years.

With a thickness of 3.95mm and a diameter of 31mm, the P.4000 consists of 203 components, including 31 jewels. Ticking along at 28,800 vph, the calibre has two independent but connected barrels and a power reserve of 72 hours. For those who like this sort of thing, and I know that many of you do, it is a hacking seconds. If you are unfamiliar with what a ‘hacking’ seconds is, when the crown is pulled out the seconds hand stops, allowing for greater accuracy when setting the time. 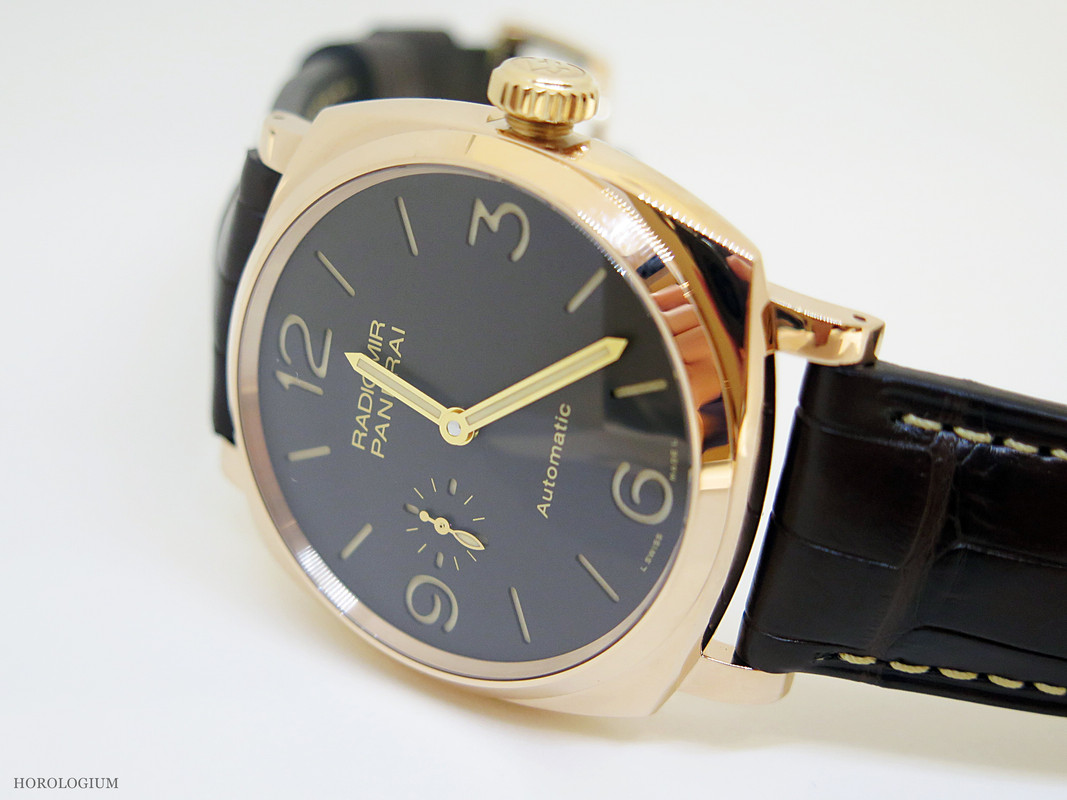 As mentioned, this new piece will come in two versions – a stainless steel one with the micro-rotor in tungsten, and a red gold model with a gold rotor, circular brushed finishing, gilded engraving. The PAM572’s dial is black with luminous Arabic numerals and hour indices, the PAM573 has a brown dial and the same luminous numerals and indices. The water resistance for the PAM572 is 10 bar (100m) and 5 bar (50m) for the PAM573. 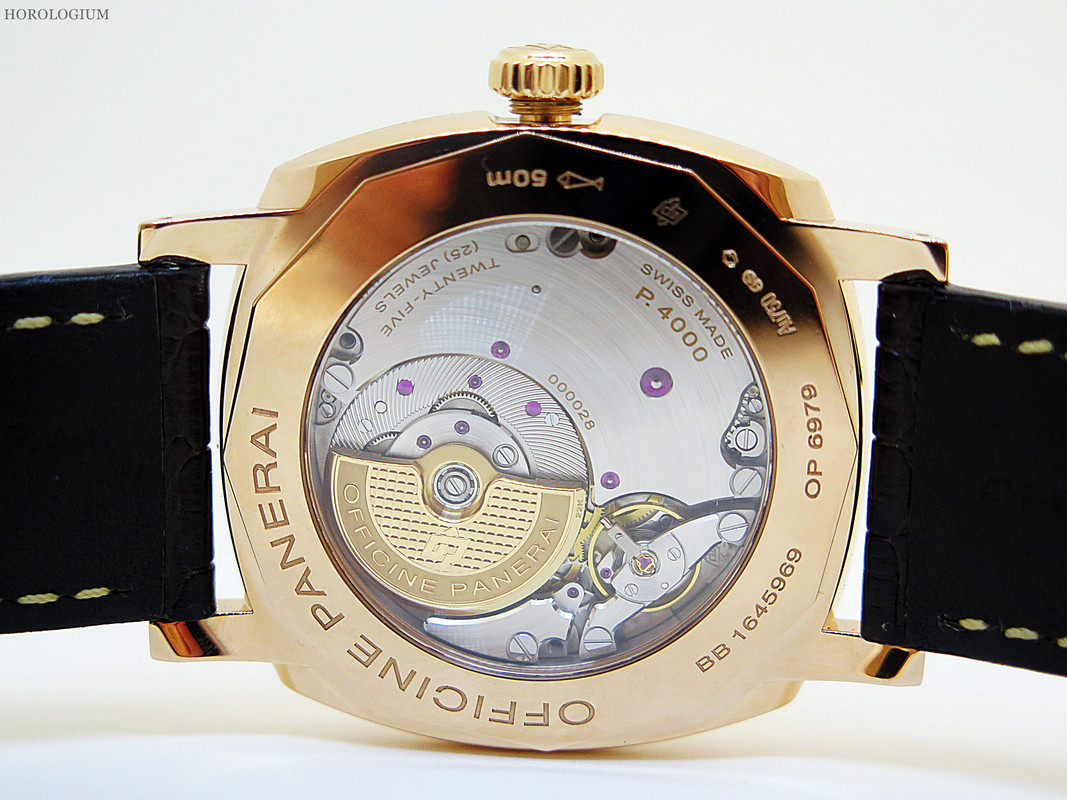 There have been discussions regarding the ‘automatic’ text on the dial in terms of whether it should be there or not – given the nature of this particular watch, this particular model, within the broader context of OP, I understand why it is there, but as with most of the ‘minutiae’ when it comes to Panerai watches, people will no doubt be debating about it for years to come.

This was a watch I had been eager to see at Watches & Wonders. Now having seen it, and some of the other OP releases during the fair, this remains my favourite, followed by the Marina Militare special edition. There will be two thousand PAM572 coming out this year, and five hundred of the PAM573.