HANDS-ON : with a vintage Doxa Grafic

The Doxa brand was founded in 1889 by 21 year old Georges Ducommun to create fine pocket watches, gradually progressing to fairly conservatively styled wristwatches and garnering a reputation for being a bit of an innovator, through developments such as his patenting of an 8-day watch movement in 1908. Interestingly, Bugatti used the Doxa 8-day movement instrument in its iconic Type 35 Bugatti.

Upon the death of Ducommun in 1936, the company’s ownership moved to his son-in-law Jacques Nardin, grandson of another famous watchmaker, Ulysse Nardin. It was Nardin’s stewardship which lead Doxa to diving watches, for which the brand has become most widely known in the modern era, most famously for its association with Jacques Cousteau and U.S. Diving Association, which lead to their first groundbreaking diving watch, the Sub300t, launched in 1967.

The advent of the quartz watch revolution hit the brand hard. Attempts to survive failed, and it ceased operations in 1980, only to be purchased by the Jenny family, and revived.

Against this background, it is almost a little odd that what has become one of its  iconic watches was, in fact, not only unusual for the brand, but also for its time. The Grafic of 1957, with its stark dial with a scaled down starburst pattern, was a Bauhaus influenced design born of Pierre Henry’s (Doxa’s Advertising Manager) keenness for a thin, square cased dress watch that was non-angular. The trend at the time had been very much for round cases.

Instead of positioning the brand name squarely at the centre of the dial, it was decided to place it at the lower right-hand corner, to give the design even more distinctiveness. The design proved immensely popular, leading to the production of a ladies’ version. Its longeivity was proven when it was re-issued, by popular demand, in 1995. It sold out. 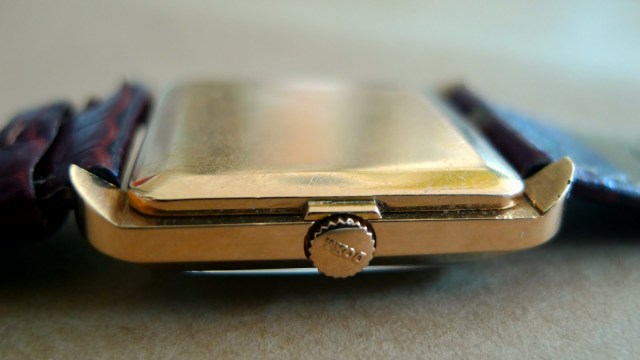 The original Doxa Grafic contained a hand wound 16 jewel calibre 104 movement. This version is  automatic, and in a gold filled case. The size is 31mm x 35 mm, tiny in modern terms, but it sits larger than you would expect. 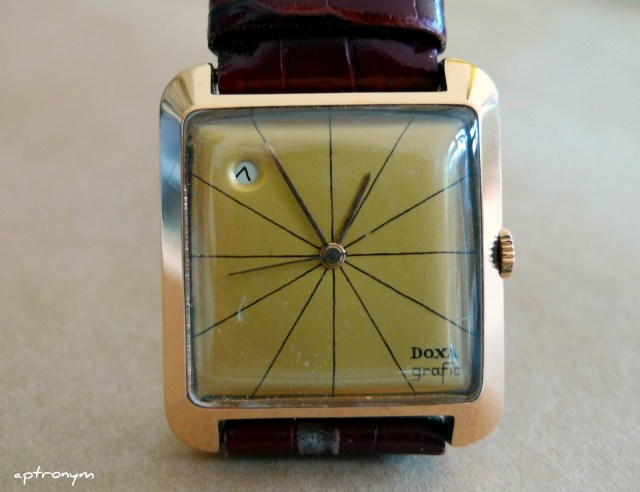 In 2007, the 50th birthday of the Grafic was celebrated by Doxa with a re-issue. Available in a steel or yellow plated case, and with a black, brown or silvered dial, it was definitely a more sleekly modern variation of the design, and available in quartz or automatic. Doxa also produced a chronograph version in 2007, but to me, this seems to undermine the entire design integrity of the original, as does the quartz option for the 2007 re-issue, for that matter.

In comparing the 1950s version with the 2007 model, I like the use of black in this particular iteration, but the date window and new placment of the brand name seem a little askew to me; I prefer the original, where both are tucked up in the corners rather than almost being neither here nor there, placement wise.

The original version is an interesting, dressy but retro-funky watch. An uncommon beast, but one well worth looking at.