Longines’ newly announced Ultra-Chron Diver is a revival of a 1968 high frequency watch of the same name. Its 2022 version uses a new high frequency movement – the Calibre L836 beats at 36,000 VPH and has a power reserve of 52 hours.

The original Ultra-Chron was to mark Longines’ centenary. An attempt at a mass production model of a mechanical high frequency movement/ watch, they boasted at the time that it was “the world’s most accurate watch… guaranteed to within one second per month”.

Longines actually presented their first high-frequency movement for a wristwatch in 1959 – the Calibre 360 had a 36,000 VPH and was also chronometer grade. There were 200 pieces made between 1959 and 1963, but Longines found that the major obstacles to mass manufacturing of these movements were lubrication and a lower power reserve.

The Cal.431 was the result of their work addressing these issues. With the patented dry lubrication and guaranteed an accuracy of one minute a month, it exceeded COSC requirements. The ‘Ultra-Chron’ name was registered in 1966 and the first models using this movement sold in the U.S. later that year.

In 1968, Longines launched the Ultra-Chron Diver, the first dive watch to be equipped with a high-frequency movement. With a water resistance of 200m, it was in a cushion case and featured a red minute hand. It is the 1968 Diver which forms the inspiration for this new model.

The inaugural/ early Ultra-Chrons used the Cal. 431 (centre seconds with date), which had a 36,000 VPH and used dry lubrication called molybdenum bi-sulphide. Over the years of its production, which lasted less than a decade, other movements were used for Ultra-Chron models (which themselves took many design and case forms), including the Cal. 430 (which had a centre seconds), Cal. 432 (hours and minutes), Cal. 433 (date only), and some manually-wound movements which had a hacking seconds (the Cal. 6952 with date and Cal. 6972 with day and date). There were also Cal. 6651 and Cal. 6652 models that bore the “Ultra-Chron” name but were only 28,800VPH.

The Cal. 431 was engraved with “adjusted in 4 positions and temperature” and “36000”. The bi-directional, bi-metallic winding rotor (with the Longines hourglass) was mounted on ball bearings and had a tungsten-carbide perimeter. It had a power reserve of 42 hours. The movement was made in-house by Longines, but used the Clinergic-21 Swiss-anchor escapement. 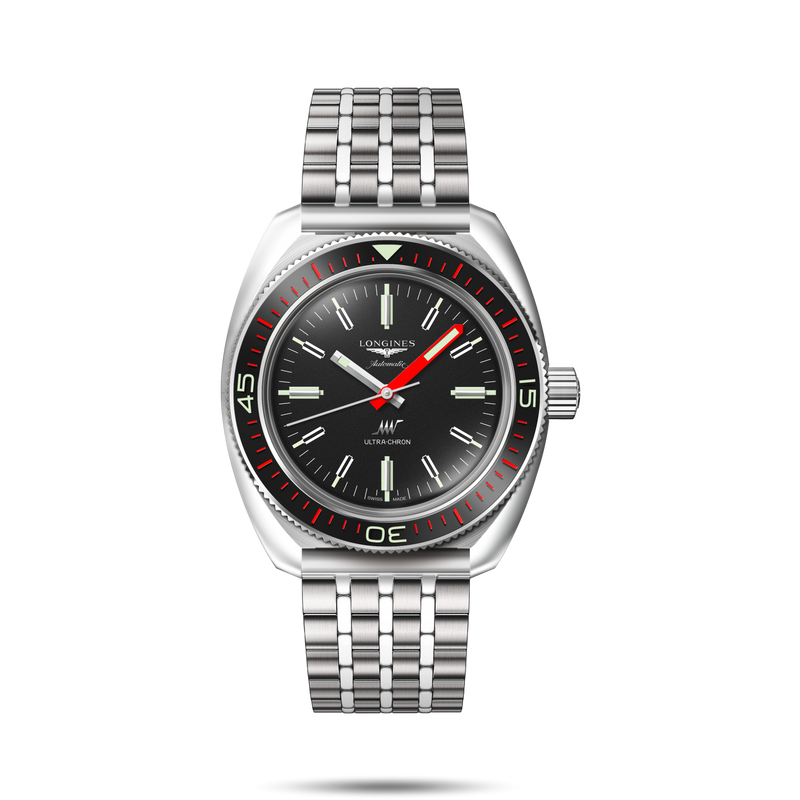 The new 2022 Ultra-Chron’s 43mm cushion-shaped steel case has a water resistance of 300m and features a unidirectional rotating bezel with a sapphire insert with luminescent accents. The black grained dial features a white minute track with alternating Super-LumiNova®-coated batons and rhodium-plated appliques. It has a red minute hand coated with Super-LumiNova®. The original Ultra-Chron logo is applied on the dial and embossed on the case back.

As mentioned, powering it is the 36,000 VPH Calibre L836.6, which has a a monocrystalline silicon balance-spring and power reserve of 52 hours. Similar to the original, the new Ultra-Chron has chronometer certification. In this instance, by independent Geneva-based testing laboratory TIMELAB as an “ultra chronometer”. Their process tests the watch head and subjects the finished watch to a 15 day testing period during which the watch is submitted to a series of tests at three temperatures – 8 °C, 23 °C and 38 °C, confirming that it meets ISO 3159:2009 standard. This chronometer certification is inscribed into the closed case back. This new Longines Ultra-Chron is available with either a leather strap or a steel bracelet and comes in a box with a second NATO-style strap made from recycled material. The Australian RRP is $5,275 on a leather strap and $5,600 on a bracelet.