It is obviously a constantly changing situation, but the list of companies from financial and other services to sporting associations, film/ entertainment, automobile, technology, fashion, sporting, logistics groups, retailers and more who are suspending operations in Russia increases by the hour. The number of luxury brands and specifically watch brands and groups, is also adding up. As of this moment :

1. Kering has donated to Ukrainian relief efforts via the UNHCR, stating “In order to contribute to humanitarian efforts to bring aid and support to Ukrainian refugees, Kering will make a significant donation to the UNHCR, the United Nations Refugees Agency. We hope for a peaceful resolution of this conflict.” In addition to this there was the announcement, yesterday, that they are closing their stores in Russia. 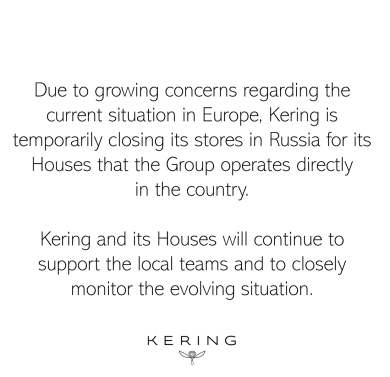 2. The LVMH Group announced on 3 March 2022 that it stands with those in Ukraine, and will continue to support their 150 employees there.

They issued the following statement : “The LVMH Group is closely monitoring the tragic situation in Ukraine and stands alongside all those severely affected by this war. The Group’s first concern is the safety of its 150 employees in Ukraine and is providing them with essential financial and operational assistance. LVMH has today also decided to make a first emergency donation of five million euros to support the International Committee of the Red Cross (ICRC) to help the direct and indirect victims of this conflict. In addition, the Group is launching a fundraising campaign in support of the ICRC to facilitate the contributions of employees across the Group and its 76 Maisons. The LVMH Heart Fund, launched in 2021, has been specifically activated to provide financial and psychological support to all employees, especially those directly affected by this conflict. The LVMH Group’s crisis committee is constantly tracking the situation and will adapt its measures as needed.” 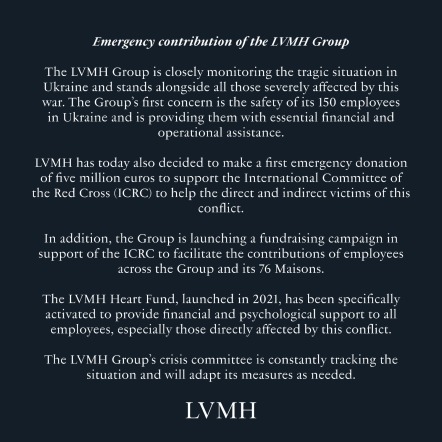 3. The Richemont Group announced on 4 March 2022 that it stands with all those in Ukraine, and also that they will provide support for their employees there. Richemont has pledged funds to Médecins Sans Frontières, stopped operations in Ukraine and suspended commercial activities in Russia.

Their statement : “Richemont’s deepest compassion and thoughts go out to our colleagues, their families and friends affected by the tragic situation in Ukraine. With the care and wellbeing of our colleagues top of mind, we are in close contact with our people on the ground and ensuring they receive all the financial, logistic and moral support they need. Richemont has initiated a significant donation to Médecins Sans Frontières (MSF). This donation will help provide emergency response activities, basic aid items, and medical supplies and support to people in need in the region. Several of our Maisons and businesses are also supporting humanitarian efforts with additional donations and contributions. Given the current global context, it is with regret that we stopped our operations in Ukraine on 24 February and suspended our commercial activities in Russia on 3 March. We will continue to monitor developments and adapt our measures accordingly.” 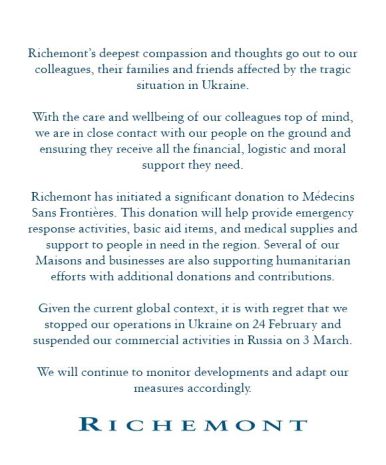 4. The Swatch Group is monitoring the situation, stating to a message to the AFP that “For the time being, we have put all our exports to Russia on hold owing to the troubled general situation”.

Other luxury brands and groups that have made similar announcements in the past few days includes Hermès, who will temporarily pause commercial activities and close its stores in Russia, and Chanel, who said “Given our increasing concerns about the current situation, the growing uncertainty and the complexity to operate, Chanel decided to temporarily pause its business in Russia.”

It is only to be expected that this list will grow longer.

6 March 2022 – Mastercard have announced the suspension of activities in Russia.

Visa is also suspending all Russia operations. See this link for their official announcement. PayPal had already stated the same, revealed by Ukraine’s Deputy Prime Minister on social media.

7 March 2022 – American Express announced that they are shutting down operations in Russia and Belarus, citing the invasion. This means AmEx cards will no longer work at Russian merchants or ATMs, and cards issued by Russian banks on the American Express global system will no longer work outside the country. To read the full statement by Chief Executive Stephen Squeri on the decision and their donation to aid organisations, go to this link.

What will step into the fold? Several Russian banks said that they would soon start issuing cards using the Chinese UnionPay card operator’s system coupled with Russia’s own Mir network.

Sberbank, Alfa Bank and Tinkoff are the first to announce the new arrangement.

In news that may affect the watch industry, as it will many others, KPMG and PricewaterhouseCoopers LLP (PwC) announced their respective actions.

KPMG’s announcement on social media stated : “We believe we have a responsibility, along with other global businesses, to respond to the Russian government’s ongoing military attack on Ukraine. As a result, our Russia and Belarus firms will leave the KPMG network. KPMG has over 4,500 people in Russia and Belarus, and ending our working relationship with them, many of whom have been a part of KPMG for many decades, is incredibly difficult. This decision is not about them – it is a consequence of the actions of the Russian Government. We are a purpose-led and values-driven organization that believes in doing the right thing. We will seek to do all we can to ensure we provide transitional support for former colleagues impacted by this decision.”

PwC said that PwC Russia will leave its network, affecting 3,700 partners and staff. Their Chairman posted the following statement on social media. 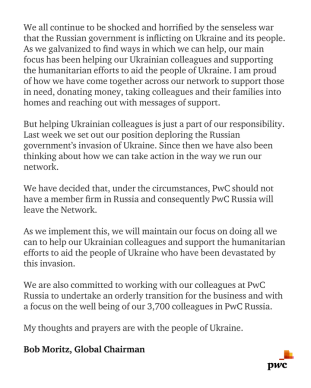 9 March 2022 – Rolex has halted exports to Russia. Rolex watches currently being sold in Russia are by independent and privately owned local retailers with inventory that was delivered before Russia’s invasion of Ukraine.

Following on from KPMG and PwC, the two other ‘big four’, Deloitte and EY, have also made announcements that they are both leaving Russia.

Yale is keeping a running list of companies which have suspended operations or made the decision to exit Russia, and those whom it states have significant exposure there. You can see their constantly updated list at this link.