One of the foci of Piaget’s Watches & Wonders 2015 releases was that of their first automatic complication watch for their women’s collection in the form of the Limelight Stella watches. The complication in question? A moonphase, courtesy of the new automatic Calibre 584P. 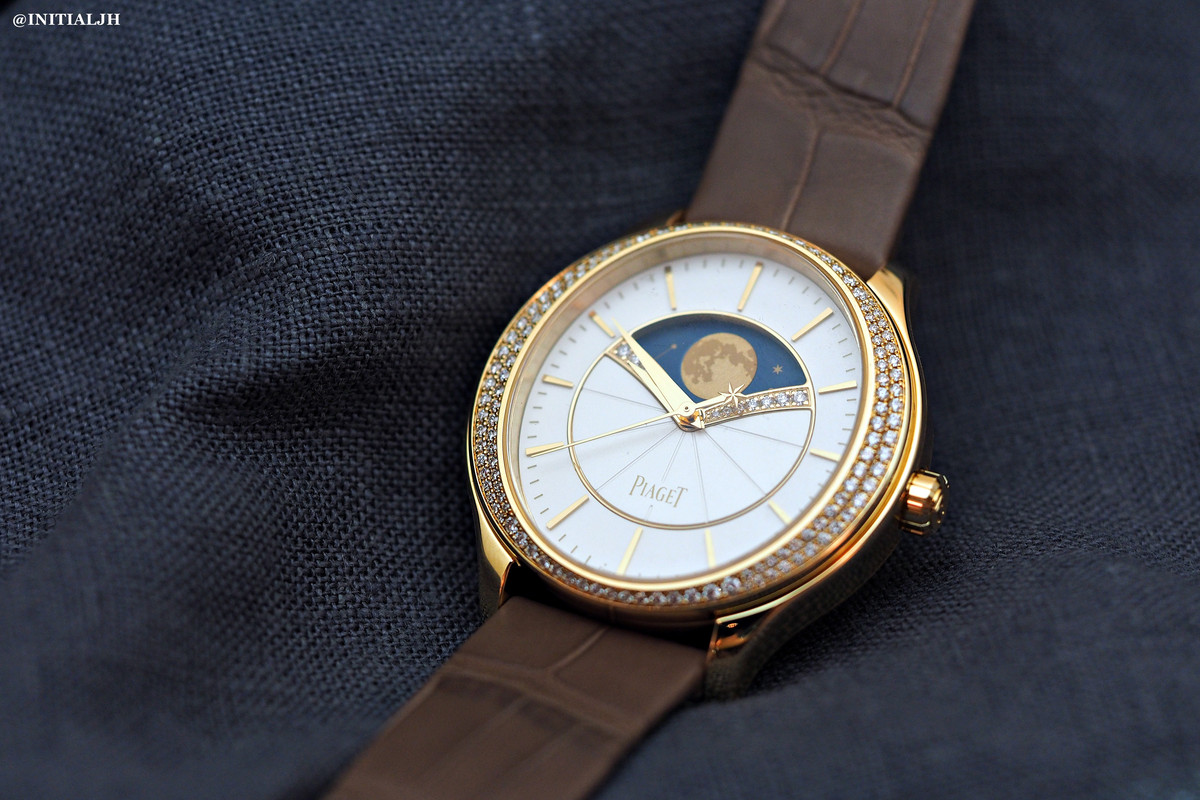 Designed and developed in both of Piaget’s La Côte-aux-Fées and Geneva locations, its display of the lunar cycle is via a two large moons framed by a diamond-set v-shape opening at 12 o’clock. Surrounding the moons you will see the celestial features of Ursa Major and Minor. 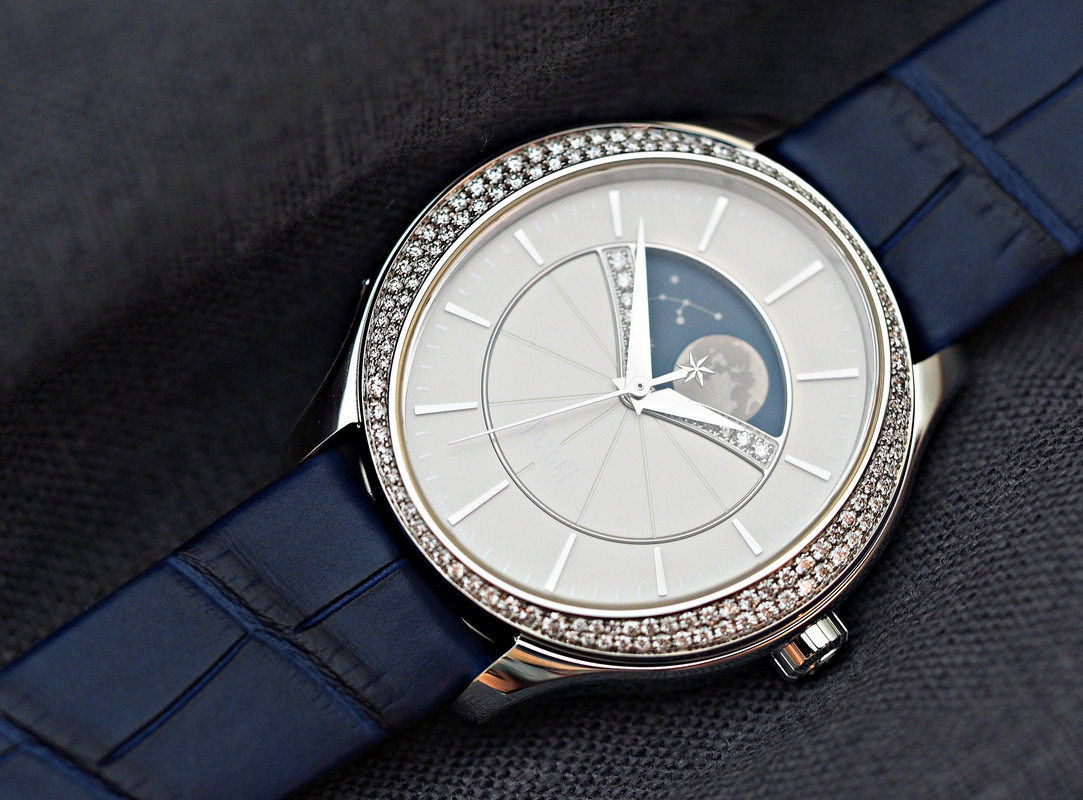 The moon phases appear on a disc adorned with stars and two moons that is driven by a 135-toothed wheel that requires a correction only after 122 years, so don’t stress too much about it. 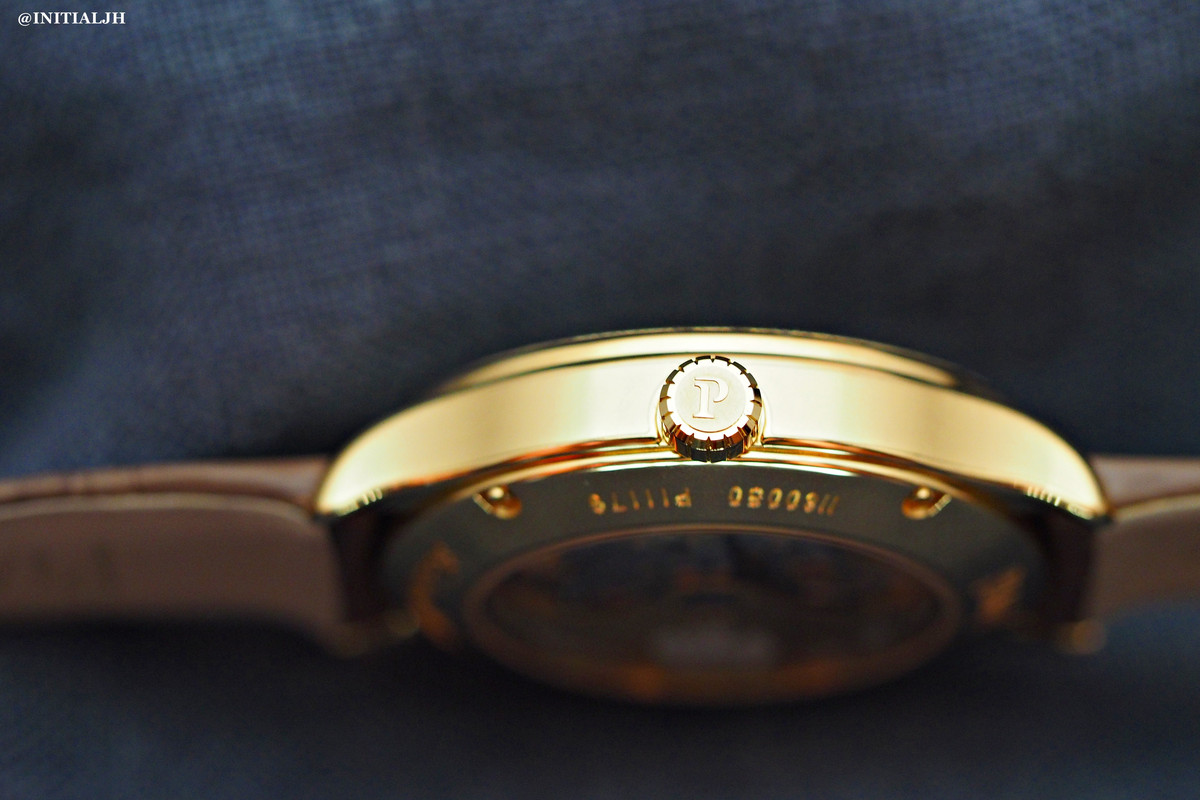 This new Calibre 584P has a 42-hour power reserve, is 21,600VPH, a circular-grained mainplate, bevelled bridges, blued screws, circular Côtes de Genève, and the Piaget coat-of-arms on the oscillating weight. 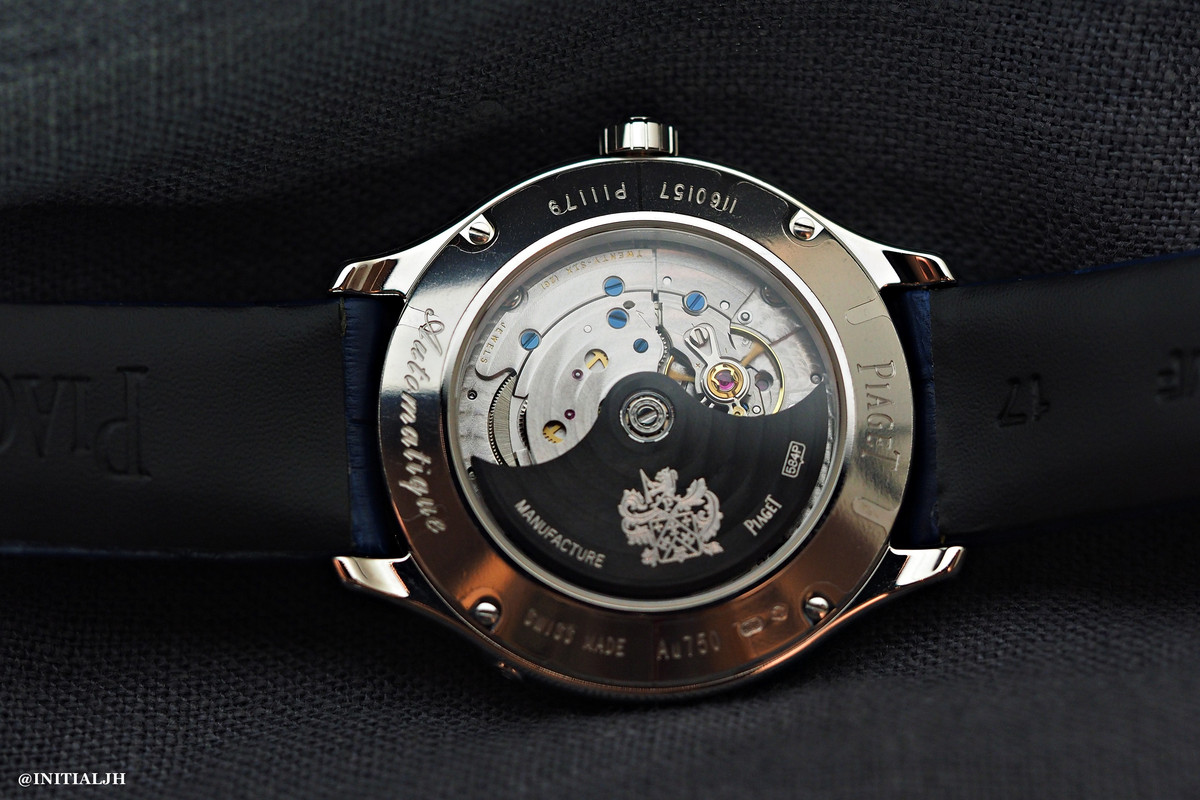 In terms of the exterior, it is a very nicely sized 36mm in diametre (thickness of 6mm), which is what gives it enough space to have such a prominent moon. It is of special note that the case design is that of an oval ‘inside’ the circular case. There are fourteen brilliant-cut diamonds accentuating the moonphase complication, with delicate applied hour-markers and a sunburst motif on the dial. There is also an added bit of charming whimsy via the star on the end of the seconds hand. Close-up, it really is a beautiful dial on an elegant watch. 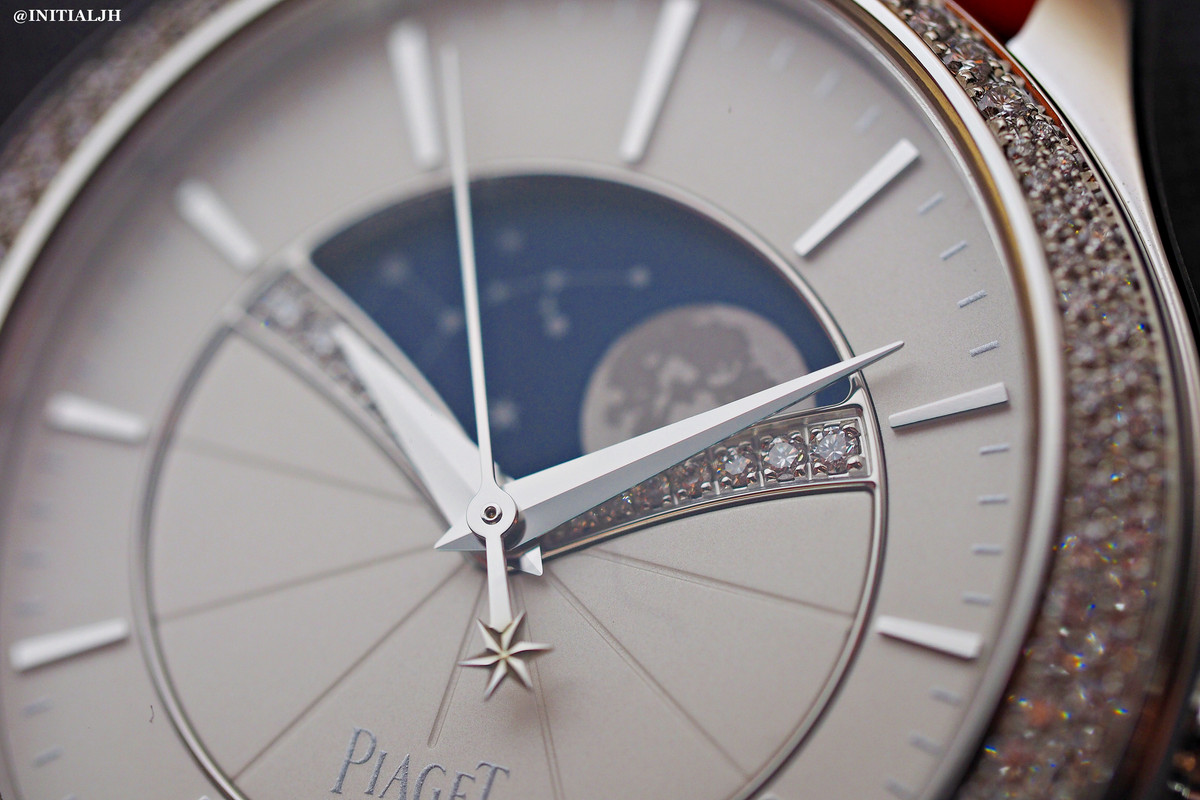 For women who are used to wearing watches smaller than 36mm you will find that the lines, especially in terms of the ‘shape within a shape’, add a softness to the size, and the lugs are very short and snug, so it is far less likely to hang over your wrist. For those accustomed to watches of around 36mm and above, and this is an increasing number of women, then you will have a fair idea of how this might sit on your wrist. 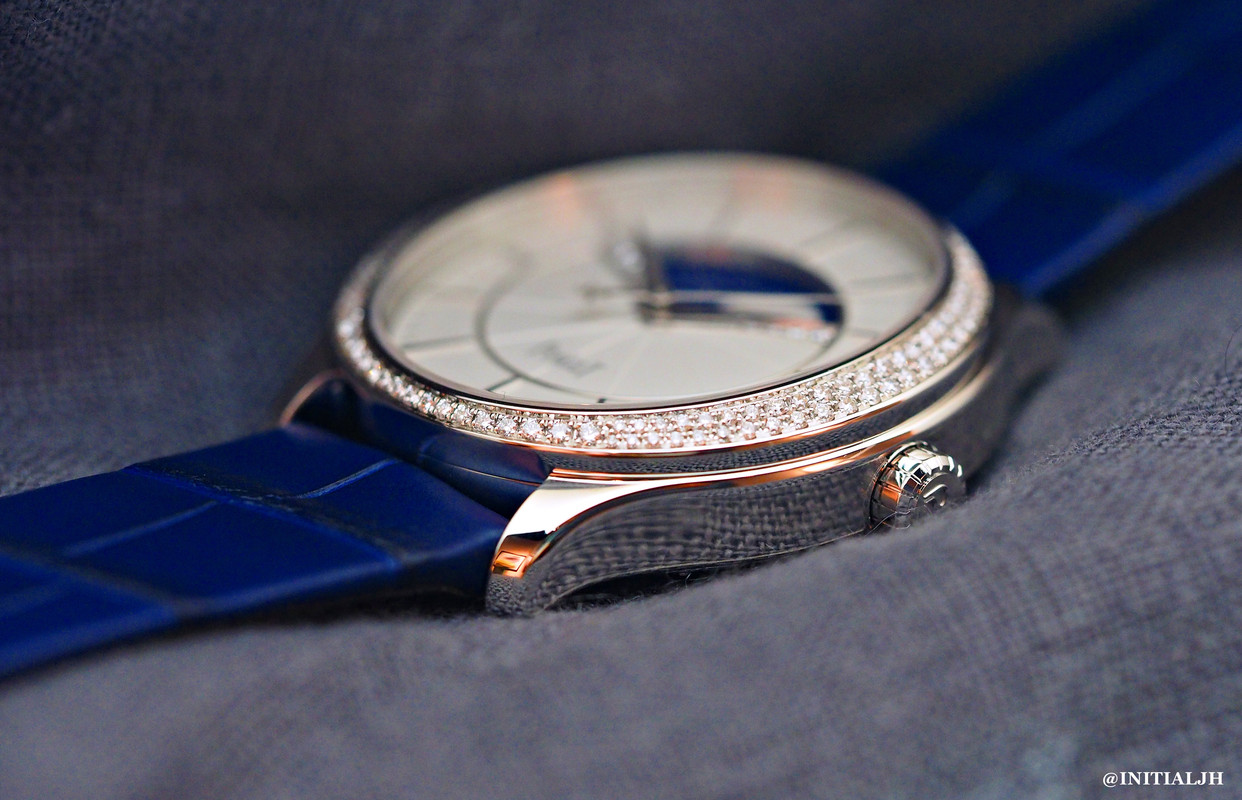 Available in three versions, the pink gold Limelight Stella comes in polished or gem-set bezel verions, whilst the white gold version features a gem-set bezel. They all come on alligator straps with matching pin buckles.

[Horologium attended Watches & Wonders 2015 at the invitation of Richemont Australia]