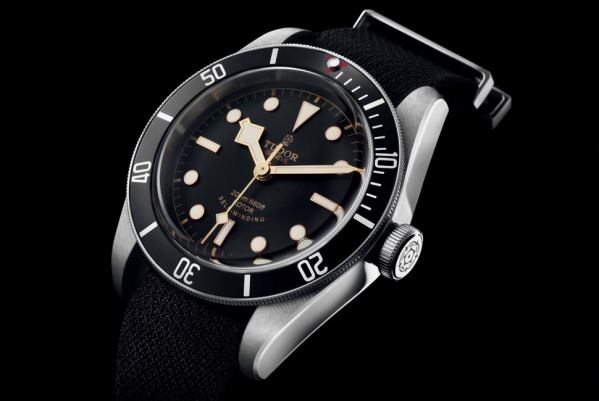 A long time ago in a watch cycle far away we wrote about the Tudor Heritage Black Bay and Pelagos watches, two very different pieces that have nonetheless both proven to be huge successes for the brand.

To quickly recap, the Black Bay design is inspired by Tudor’s vintage divers from the 1950s (in particular the Submariner 7922 of 1954 and the big crown of the Submariner 7924) but modernised. The ‘snowflake’ hands are a feature of some 1970s models (e.g. ‘Snowflake Submariner’) but basically, it is a 1950s Tudor with 1970s influences sized for current preferences, and with added colour.

The second heritage-inspired dive watch launched at the same time was the Pelagos. At 42 mm, it has a satin-finished titanium case with a black ceramic bezel, is rated to 500m (1640 ft) with a helium escape valve, and contains the same ETA 2824 as the Black Bay.

Since then there have been additional variants of both, namely the recent blue Pelagos and the Black Bay Blue, which I own. In what was probably the worst kept secret of 2015 releases, especially in light of Tudor’s ‘Only Watch’ ‘Black Bay One’ piece unique for the upcoming charity auction in aid of Duchenne Muscular Dystrophy (see the photo below, which I took at the ‘Only Watch’ travelling exhibition in Hong Kong a few weeks ago), the watch that many have been predicting and/or hoping for since 2012 is now a reality. 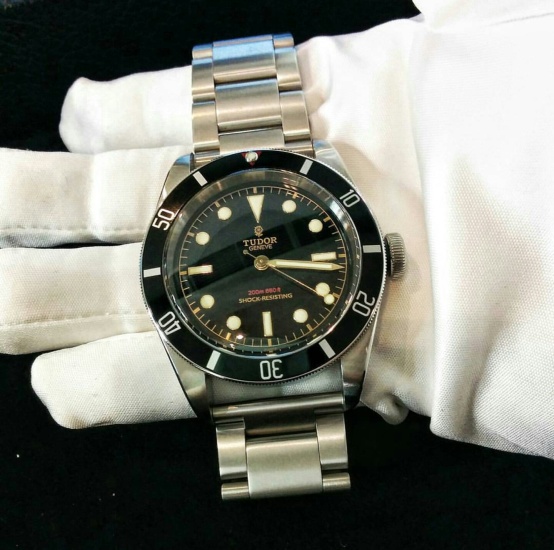 As is the case with the burgundy and blue versions, the new black model is in a 41mm stainless steel case with the same specs, including the ETA 2824 movement inside.

So – the key points are that it has the matte black dial and gilt of the hands and markers of the burgundy model, along with a matching matte uni-directional bezel. You will also note the presence of a small red triangle on the bezel, with a luminous dot inside it, at ’60’. This red triangle is a nod to vintage Tudor and Rolex Submariners.

The Heritage Black Bay ‘Black’ model will be available on a stainless steel bracelet as well as an aged-look leather strap. As per the other two older siblings, there is the thick nylon strap (which is how I prefer to wear my Black Bay Blue) as well.

As I mentioned earlier, although in many ways this model has been predicted as coming for awhile (the question as to why Tudor didn’t realise this first, before the burgundy and blue models, is an interesting thing to consider), the announcement of the ‘Only Watch’ Tudor Black Bay One merely increased the chatter, with many predicting that any new Black Bay ‘Black’ would bear more than strong similarities to this piece unique. Well as it turns out, we were all pretty much correct. Let’s see how this plays out in terms of what the auction piece will realise; in any event it is for a good cause and there are some interesting pieces, so click here and bid!

It has been very interesting to watch Tudor’s revival in recent years from a brand which seemed to always be around in certain markets to one whose renewed life on a more worldwide level has given it a generation of new fans. With the price of this on par with the burgundy and blue models (the pricing has been a major selling point) and a colour that is likely to have broader appeal, especially to those who want that (vintage) Submariner look but who want something more conservatively coloured for longevity and outfit versatility, there is little doubt that this this will do at least as well as its predecessors.

On the subject of its distant ancestors, if you are interested in reading a bit about some vintage Rolex Submariners, click here for a post about the Rolex Ref.5513 Mk IV, go to this page to read about the Double Red Sea-Dweller, and here for some notes from a vintage Rolex collector about the Ref. 5510.