The ‘ultra-thin competition’ has been without question a Piaget versus Bvlgari competition in recent years, with the historical specialist coming up against the newcomer which has not just provided it with competition, but which has also created an impressive collection of ultra-thin models and breaking multiple records in the process.

But now, in perhaps the most unexpected of all ultra-thins, the 2mm of the Piaget Ultimate Concept and the 1.8mm of the Octo Finissimo Ultra have had their places bumped down by a brand not known for venturing into this space – Richard Mille. 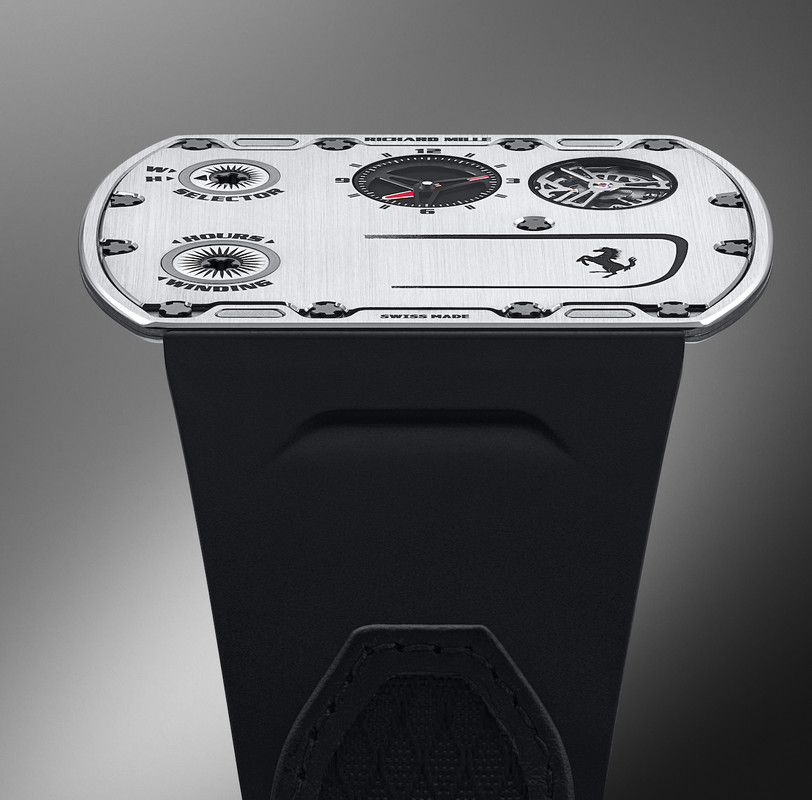 A year after becoming the latest watch partner of Ferrari, the new RM UP-01 Ferrari is the first watch to arise from this relationship. The all-important specs are that the monobloc titanium case measures 51mm x 39mm with the new astonishing record-breaking thinness of 1.75mm, with a calibre thickness of 1.18mm and a mind-boggling weight of 2.87 grams. The case is made in-house at Richard Mille. 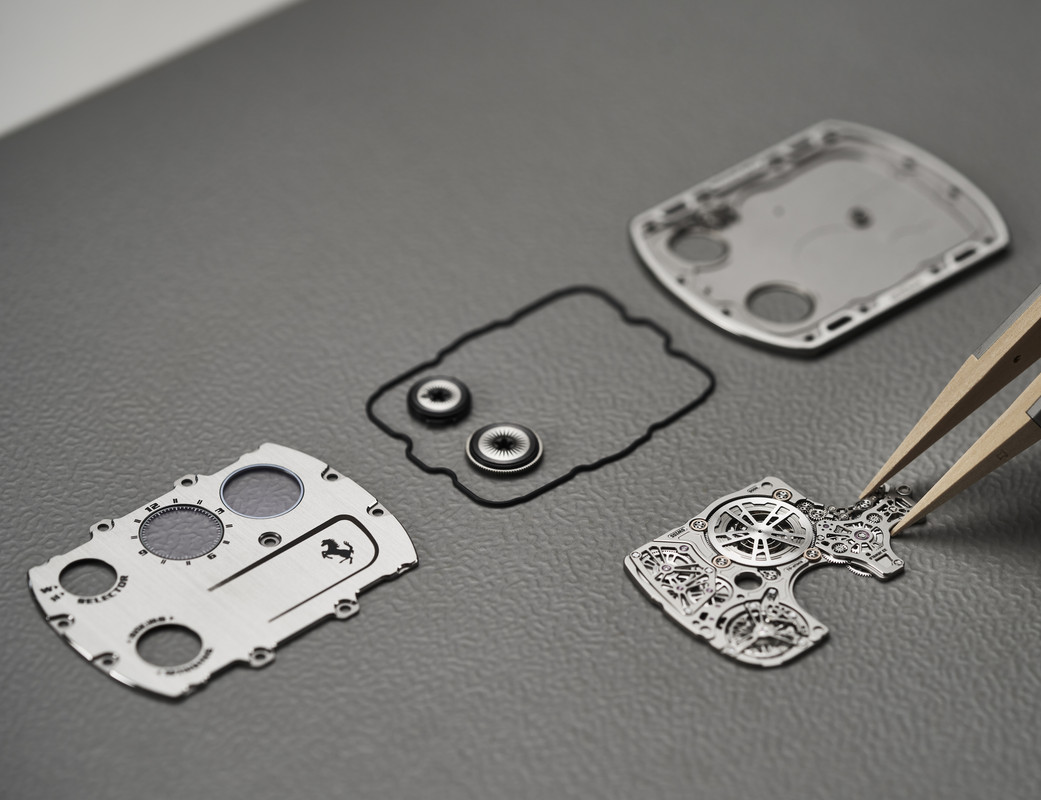 For those familiar with the ultra-thin achievements of recent years, Richard Mille has not used the case back as the base plate for the watch. Instead, they have a new manually-wound calibre developed with Audemars Piguet Le Locle (previously and more commonly known as Renaud et Papi). They simply did not want to use the base plate/ case back double-up approach, preferring to do it the old-fashioned way.

As we mentioned in the past with regards to Piaget’s Ultimate Concept, one of the critical issues at this pointy end of the ultra-thin world is the strength of the material used for the movement, to withstand shock as well as protecting the movement. For this new watch, many of the components are in titanium for both strength/ rigidity reasons, and for lightness (the latter, a characteristic of Mille watches).

The skeletonised base plate and the bridges of the UP-01 are a grade 5 titanium alloy that is 90% grade 5 titanium, 6% aluminium, and 4% vanadium. Richard Mille say that the RMUP-01 movement is capable of withstanding accelerations of more than 5,000gs. It might be crossing sport boundaries, but there’s a tennis player who might be able to test that for them.

The new patented titanium escapement, re-designed so as to reduce its thickness, has a visible inertia wheel. In addition, there is an extra flat barrel and super-fine hairspring. The new movement beats at 28,800VPH and has 45 hours of power reserve and 10m of water resistance.

There are two two sapphire crystals – one over the time indicators (the hands are directly affixed to the wheels), and the other over the balance. Both are 1,800 Vickers but the first is 0.45mm thick and the latter has a thickness of 0.20mm at the centre and 0.30mm at its edges. Trying to achieve this level of ‘thickness’ meant ruling out a movement with superimposed gears and hands. The dial is mostly titanium. At 12 o’clock is the hour and minutes sub-dial, and at 1 o’clock is an aperture through which the balance wheel can be seen. The winding mechanism is between 7 and 8 o’clock and operated by a special key. Between 10 and 11 o’clock, and integrated into the bezel, is a winding (W)/ setting (H) function selector. On the bottom right of the dial is the laser-engraved Ferrari horse.

The base plate and skeletonised bridges are grade 5 titanium. The patented extra flat barrel is fitted with a very fine hairspring and the architecture of the new patented ultra-flat escapement had to be re-designed. To cut down on thickness, the small plate of the balance and dart (guard pin) two parts that prevent the anchor from slipping back during the free phase of the balance wheel’s movement were eliminated.

The new patented ultra-flat escapement with a titanium balance wheel is slimmer. To lower the height, they got rid of the small plate of the balance and dart/ guard pin, which protect the lever in case of shock by preventing the anchor from slipping back when the balance wheel is in motion. The new patented, ultraflat escapement eliminates both parts and replaces it with an elongated fork with new horns.

It was also necessary to re-design the winding mechanism by eliminating the winding stem. Replacing it are two crowns, one for function selection, the other for the selected function, both integrated in the case as movement wheels.

Finishing-wise, the titanium base plate is sand-blasted, as are the bridges, which are also hand-polished. The steel parts are micro-blasted, sapphire-blasted, and the anglage and polishing done by hand. The wheels have concave chamfering, rhodium plating, and circular graining. 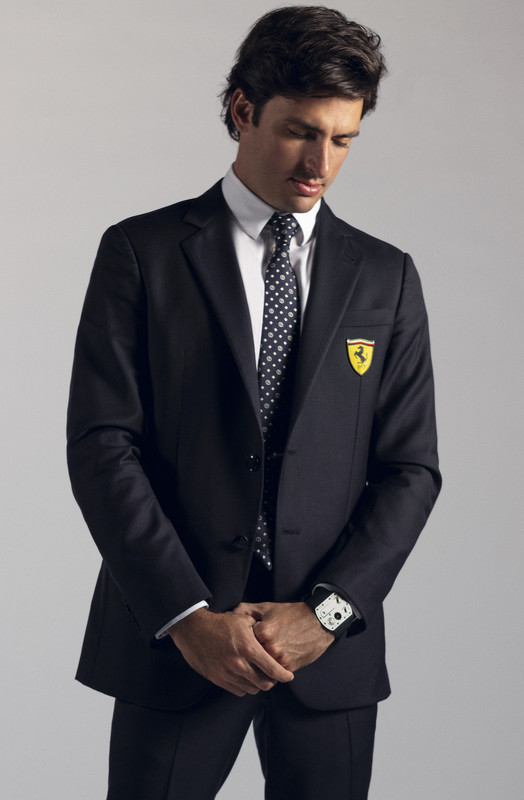 Limited to 150 pieces with a price of US $1.8m, it is now the thinnest watch to date. This is no ordinary car collaboration watch. The UP-01 took years of R&D and over 6,000 hours of development and lab testing. What we will see from Richard Mille’s ultra-thin (or as they are calling it, ‘Ultra-Flat’) technology in the future remains to be seen, but it will be fascinating to see if this new record-breaking watch will lead to some healthy competition with the two dominant ultra-thin brands and lead to more interesting new things from them.