Following on from a recent piece about a new time zone model for this year, today we are looking at another new 2022 ‘travel watch’, but one which is radically different to the very traditional Ref 5230P-001.

Meet the ‘Le temps voyageur’, Hermès’ new travel watch in its Arceau collection. Coming in a 41mm sized platinum model with a matte-black DLC-treated grade 5 titanium bezel and a 38mm 316L steel variant, it is a travel watch with a new interpretation of how to display the 24 time zones.

The twenty-four time zone cities are displayed on a circular disc on the four-part dial’s periphery. The ‘travelling time’ sub dial is a satellite that moves along this disc and shows the current time via a small red arrow. The home time is an aperture at 12 o’clock. If you look closely, you will see that instead of Paris, that city’s designation is ‘24 FBG’, a reference, of course, to their Parisian address.

The dial features a design by Jérôme Colliard for the ‘Planisphère d’un monde équestre’ scarf, which represents the equine ties of Hermès – the scarf’s design was inspired by a giant globe created by Colliard for the 2016 Saut Hermès showjumping competition.

The continents and oceans are lacquered in relief, and feature sand-blasted and sunburst finishing. 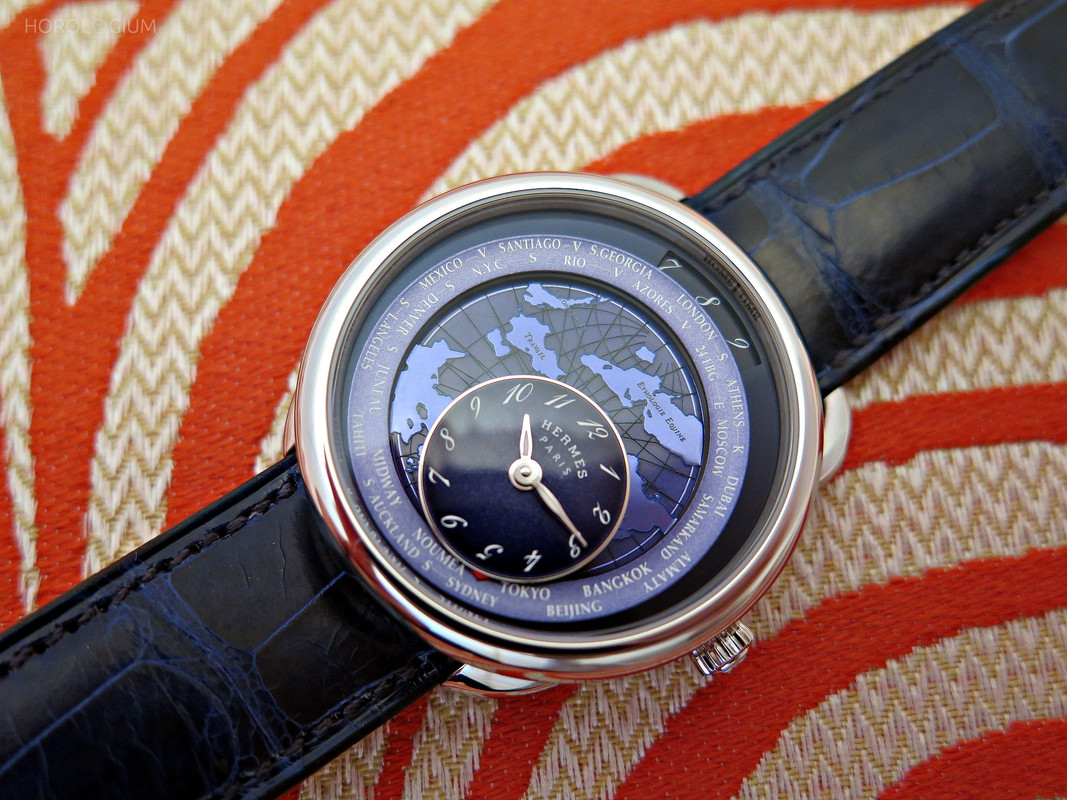 The platinum and titanium model has a galvanised dial with light grey transferred continent names and contours. The oceans are laser-engraved then lacquered. The transfer meridian and parallel lines are charcoal grey. The sub dial is sand-blasted with a black gold-lacquered gradient rim. The transfer Arabic numeral are silver powdered. The city flange is sand-blasted black, and the silvered city names are als powdered. There is a sunburst black ‘home time’ aperture at 12 o’clock. The gold hands are black and have Super-LumiNova®. 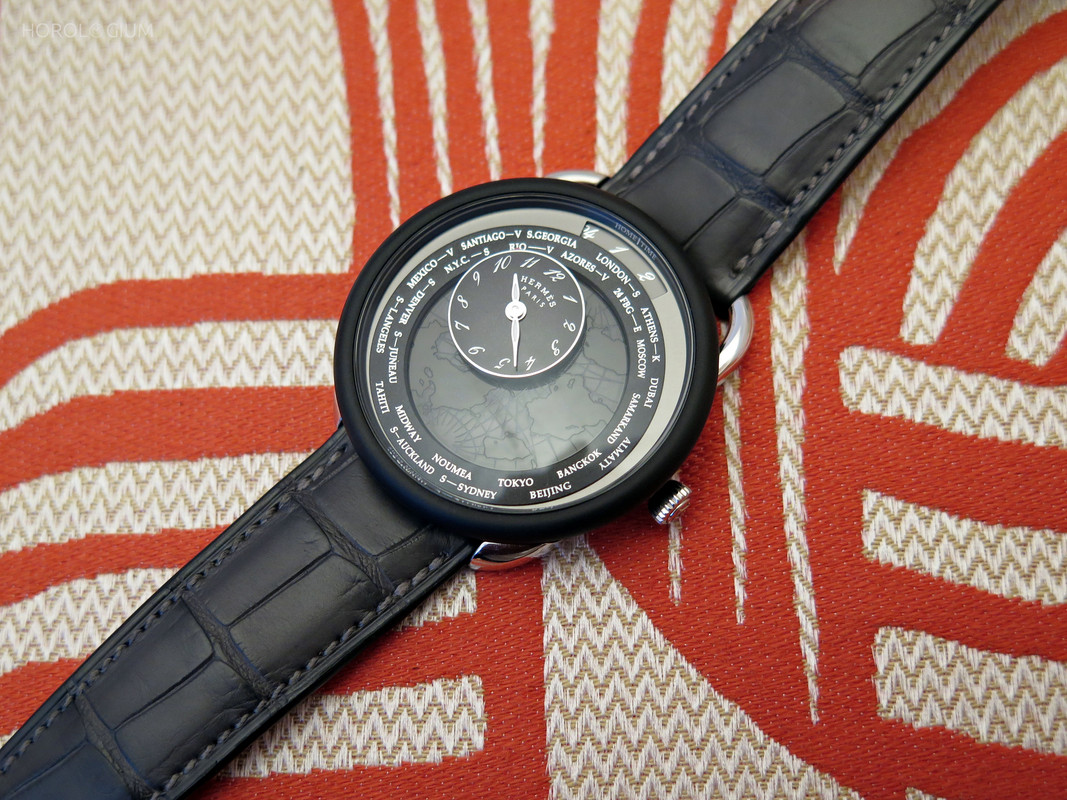 The stainless model has a galvanised dial with blue transferred continent names and contours. Again, the oceans are laser-engraved then lacquered. The meridians and parallels in this instance, are blue. The satellite sub dial has a blue-lacquered rim. Arabic numerals are white. The city flange is blue and has circular satin brushing, along with white transferr city names. There is a sunburst satin-finished blue ‘home time’ zone and hours aperture at 12 o’clock. The hands for this model are rhodium-plated and have Super-LumiNova®. 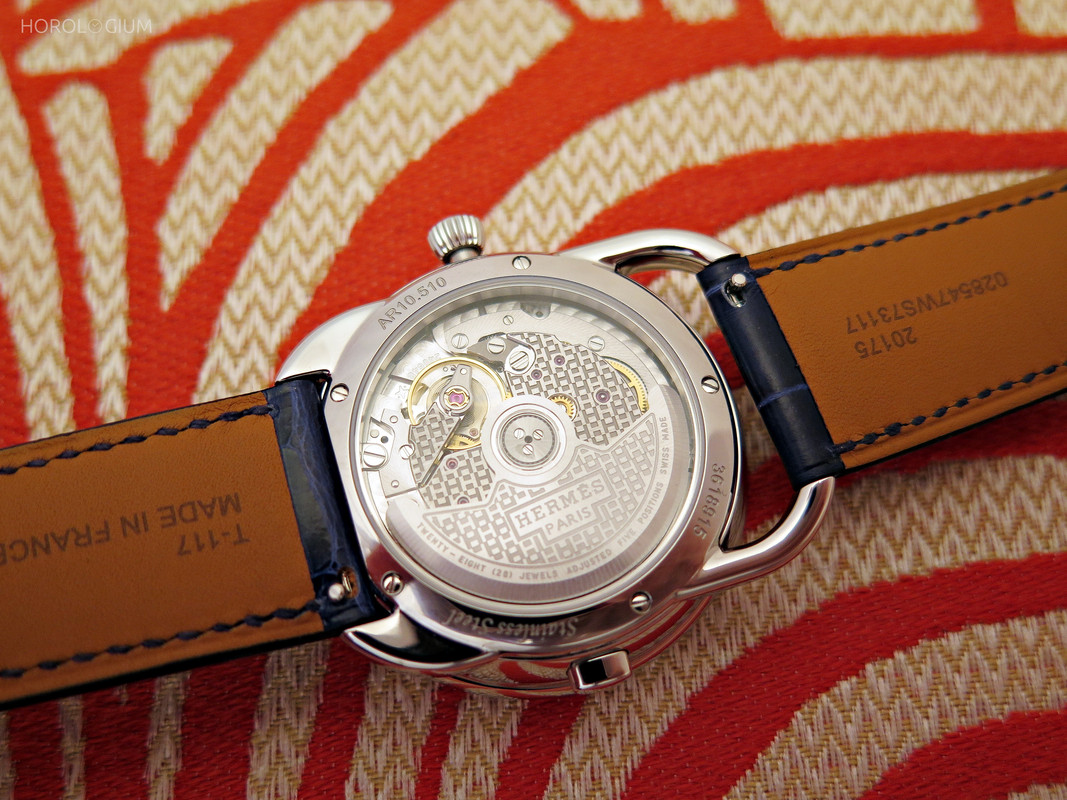 The movement powering the Le temps voyageur is the in-house automatic Hermès Calibre H1837, which beats at 28, 800VPH and has a power reserve of 40 hours. The patented ‘travelling time’ module was developed for them by the one-and-only Chronode. Finishing consists of a circular-grained and snailed base plate, satin-brushed bridges and oscillating weight, and the patterned ‘Hs’ on the base movement, and the module, which has 122 components, has bead-blasted bridges.

Finally, of course they come on different straps.

In the case of the 38mm steel model, it’s either a sapphire blue alligator strap or a navy blue Swift calfskin strap, both with a 316L steel pin buckle.

If we look purely at the functionality part of this watch, in terms of the execution of the time zone complication, there really isn’t a competitor at present. There is something about this unexpected form that makes me think that there is probably only one other large brand that might have come up with this idea (you can probably guess which), but in any event, they didn’t.