It was only two months ago that we covered the new CODE 11.59 Flying Tourbillon Flyback Chronograph, but complications in this collection aren’t done for the year, with Audemars Piguet’s announcement of the new (very) limited CODE 11.59 Grand Sonnerie Carillon Supersonnerie. It’s important to remember that when the CODEs were first launched, amongst the deluge of launch models was a Minute Repeater Supersonnerie (for CHF 295,000), so there is a precedent for this new piece.

There are five new Grande Sonnerie Carillon Supersonnerie timepieces, each with a unique enamel dial decorated with antique gold spangles (‘paillons’) by master enameller Anita Porchet and her atelier. Yes, there is the undoubted technical prowess of these watches, but the involvement of Porchet is a major selling point as well. Three of the five have been decorated whilst the remaining two pieces remain blank – the two owners will be able to work with Porchet to create their own dial.

Anita Porchet was introduced to the word of enamelling as a child, studied fine arts (winning the Patek Philippe prize shortly after graduating), and her significance is as such that in 2015 the Fondation de la Haute Horlogerie presented her with the “Hommage au Talent” prize. She is the best known enameller to work with watch brands, and has had her own atelier since the 1980s. Importantly, she has not just honed her skills but also taken on apprentices and taught the craft, including at the School of Applied Arts (EAA) in La Chaux-de-Fonds.

Audemars Piguet is no stranger to chiming watches, having Grande Sonnerie, Petite Sonnerie and Minute Repeaters all to their name. They may not have been a big part of their 20th or 21st century offerings (or indeed those of any brand), but more than half of the 1625 watches produced between 1882 and 1892 included a chiming mechanism. Of these, only twenty-eight were Grand Sonneries. In 1892, in collaboration with Louis Brandt & Frère, Audemars Piguet created the first minute repeater wristwatch, featuring two hammers that could strike the hours, quarters and minutes on request. From 1892 to 1957, a scant 35 minute repeater watches were made.

Chiming wristwatches made their return at Audemars Piguet in the 1990s, with the launch of their first Grand Sonnerie wristwatch in 1994. Its movement was 28.6mm in diametre and 5.2mm thick. Between 1995 and 2002, 188 wristwatch calibres with a Grand Sonnerie were made, of which this was one. 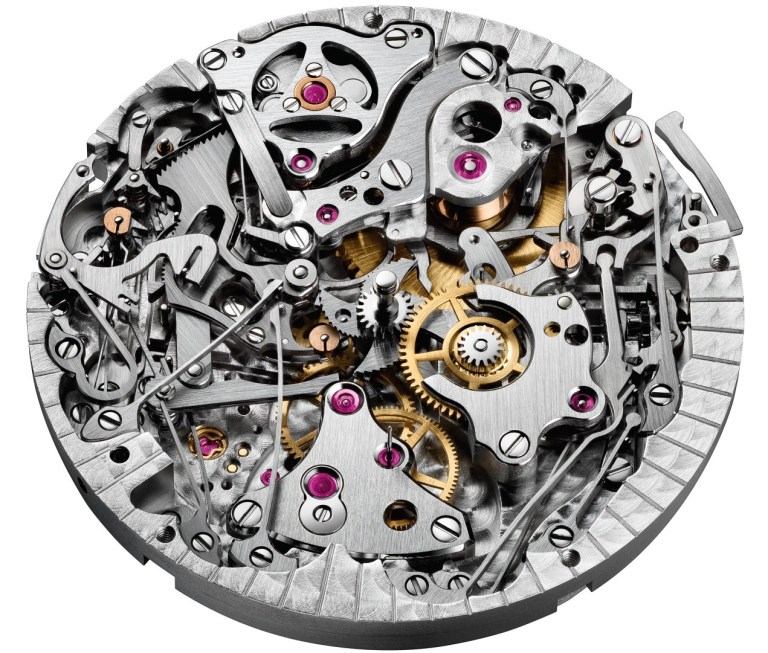 The new CODE 11.59 Grande Sonnerie Carillon Supersonnerie uses a new hand-wound movement, the Calibre 2956, which combines a Grande and Petite Sonnerie carillon, minute repeater, and the patented Supersonnerie introduced in 2015 in the Royal Oak Concept collection and which, as mentioned earlier, made .an appearance in the launch CODE 11.59 collection. It is 29.9mm in diametre with a thickness of 5.88mm, has 489 parts, beats at 21,600VPH, and has a power reserve of forty-eight hours. 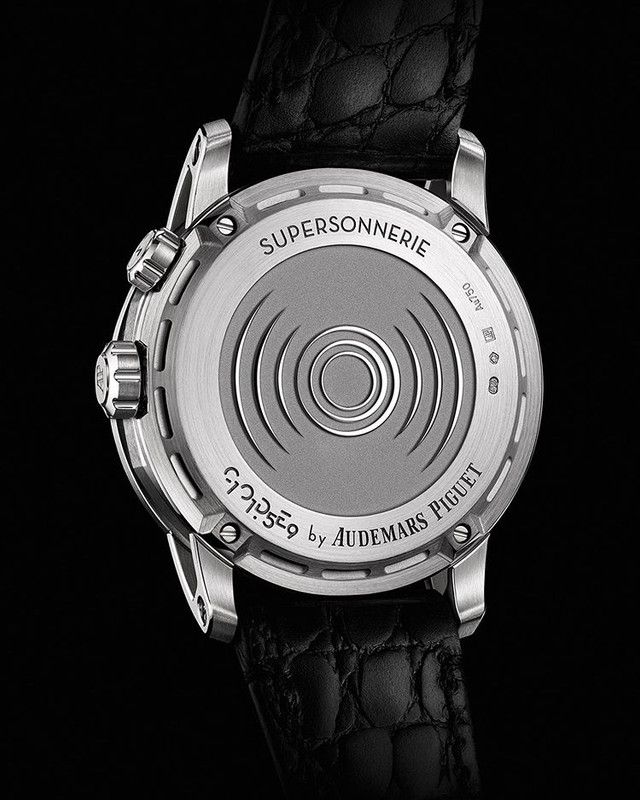 So what is a Grande Sonnerie? The term means ‘grand strike’ in French, and it refers to a complication in a mechanical watch or clock which combines a passing quarter striking mechanism with a repeater. The hours and quarters chime ‘en passant’, or as they pass. In the case of wristwatches, this means that means that on the quarter hour it strikes the number of hours audibly on a gong, and then the number of quarter hours since the hour on a second gong. For clocks, the quarters come before the hours.

The hour and quarter strikes can also be activated on demand at the push of a button. So a Grand Sonnerie timepiece not only strikes the hour, quarters and minutes on request like a traditional minute repeater, it can also strike the hours and quarter hours automatically without activation. In the Petite Sonnerie mode, the watch chimes the hours, and the automatic chiming is deactivated in the silent mode.

The carillon aspect of this piece means that the Grande Sonnerie Supersonnerie has three gongs and hammers instead of the two on a standard chiming watch, and therefore strikes the quarter hour with three successive notes (high, middle, low) instead of two. The patented Supersonnerie mechanism was the result of eight years of research in collaboration with the Swiss Federal Institute of Technology Lausanne (EPFL), inspired by early minute repeater pocket watches. The three gongs are not attached to the mainplate, but to a device acting as soundboard, which improves sound transmission. 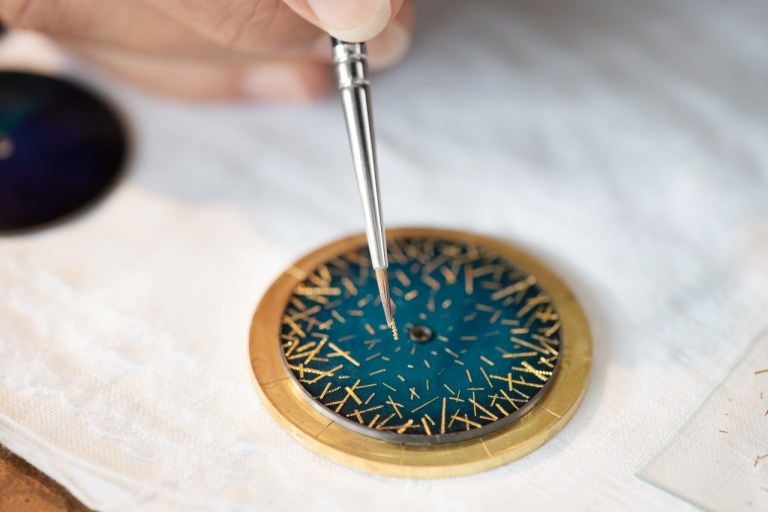 The Grand Feu paillonné enamel dials for these five pieces are the first time that Audemars Piguet have sought out the expertise of Anita Porchet.

Paillonné enamelling involves tucking a piece of gold foil ‘spangle’ (paillon) between two layers of enamel. Each of the Grand Feu enamel dial’s spangles is gold which has been cut and curved into thin leaves. The enameller puts each spangle by hand onto the enamel plate, a thin layer of glass sand mixed with water is applied by hand onto the dial, and it is then heated at over 800°C in an oven. This is repeated multiple times until the desired transparency, depth and effect is achieved. The dial is then covered with a thin layer of transparent enamel after which it is mirror polished. 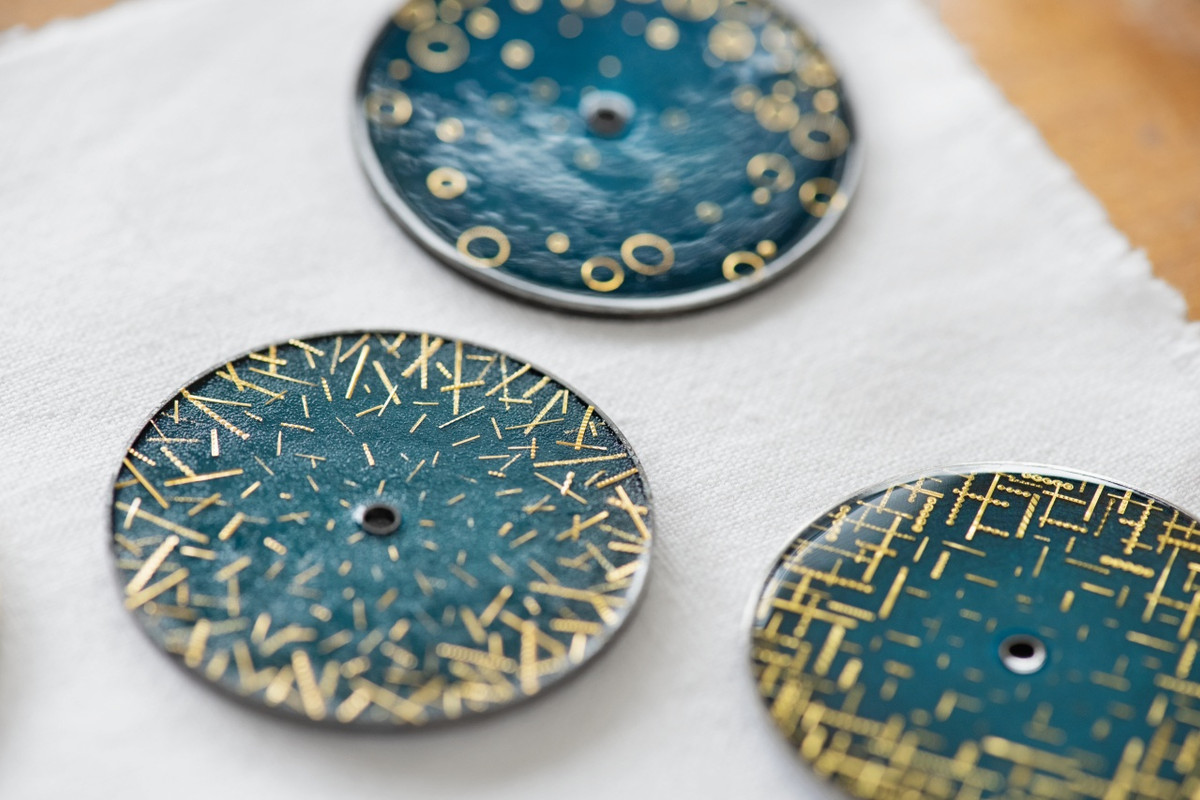 As mentioned, the CODE 11.59 Grande Sonnerie Carillon Supersonnerie with the paillon dial comes in an edition of five pieces, three with existing dials and two to be determined by the owners. The price of the pieces with the three ‘known’ dials is CHF 725,000 (excluding taxes) but for the other two will obviously depend on the nature of the dial choice.

On the subject of carillons, for those readers outside Australia, there is one in Canberra on the foreshores of Lake Burley Griffin. The 50m high National Carillon was a gift from the British Government to mark fifty years after the founding of the nation’s capital. The 57 bells, of which are two new ones that arrived in 2020, weigh between seven kilograms and six tonnes and were cast by John Taylor & Co of Loughborough. This year makes the 50th birthday of the Carillon, and you can read more about it (and hear it), at this link.

If you want to read about another sort of chiming watch, the Westminster Chime, click here.