Today we are looking at a watch that was in competition for the GPHG 2020, but which despite being a very interesting piece mechanically, did not make the shortlist – the MOONYANG King Arthur.

A handful of years ago someone in the watch industry mentioned that they had just seen, in a display cabinet, some watches by a brand that was unknown to them. They had been particularly impressed by the quality of some highly decorative dials. So I wandered over to take a look. The brand was called FIYTA.

Although without a notable international profile, FIYTA, founded in 1987 (when it was known as the Shenzhen Feida Watch Company) is perhaps China’s most successful domestic watch company. Although they primarily use imported Japanese quartz movements, they have also produced watches that were used in the 2003 and 2006 Shenzhou V and Shenzhou VI space missions. In fact they are the official suppliers to the Chinese manned spaceflight program. Since 2008 they have ramped up the use of mechanical movements for their premium and special edition pieces, by and large using Japanese and Swiss movements, but also Chinese tourbillons.

In 2018 Sun Lei (aka Sun Mu Yang), the Chief Designer and twenty year veteran at FIYTA (for whom he was their first in-house industrial designer), founded a new watch brand – MOONYANG. Named after his pen brand Sun Muyang, it is the culmination of his vision for a Chinese luxury mechanical watch brand.

What is special about this young brand is the movement that features in the Arthur. It is the adult realisation of a childhood interest in things that ‘explode’ with energy – a watch with an ejecting (and retracting) hour hand system.

The key person involved in the movement is watchmaker and movement developer Eric Coudray (TEC Ebauches). Coudray’s name may not be known to everyone, but you may have seen him mentioned for his part in MB&F’s Legacy Machine Thunderdome (which is in the final six under consideration for the ‘Mechanical Exception’ category of the GPHG 2020), the Spherion by C. Purnell with its triple-axis tourbillon that rotates 360 degrees in eight seconds, or the H5 collection from HYT Watches, just to give a couple of examples. He was also at Jaeger-LeCoultre for two decades, where he was behind the Master Gyroutourbillon (2004), which had its inspiration two decades earlier courtesy of an Anthony Randall clock.

This MOONYANG movement took five years to develop and is exclusive to the brand. It wasn’t just about how to eject/ retract the hands individually, but also how to do so smoothly, how to deal with the energy loss involved each time the hands move up/ down, and how to make it all possible in a wristwatch size.

The MOONYANG Jumping H Hands movement debuted as a concept watch at Baselworld 2018 and in 2019 the Xuan Yuan Sword made its appearance, but the Arthur model may be a breakthrough in terms of broader appeal.

As the ‘Sword’ series name indicates, the twelve hour hands are designed to look like sword blades, and they eject at each hour. Underneath each hour hand there is a rail, along which the hands move. With the passing of each hour the ‘minute sword’ completes a circle, whereupon the next hour hand ejects to the outer part of the rail and indicates the new (hour) time. When it is time to change from 12 o’clock to 1 o’clock, the hour hand at one o’clock stays still and the other eleven hour hands instantaneously and simultaneously pop back to inner end of the track. Despite the huge amount of energy involved in these sorts of mechanics, the automatic Jumping H Hands movement, which beats at 28,800 VPH, has 42 hours of power reserve.

As for the dial itself, it has five layers and inlaid markers. The hour and minute hands are handmade. The dial is a 5-layer structure with markers inlaid. As you can see, there are several levels on the lugs and twelve ‘nails’ in the bezel. 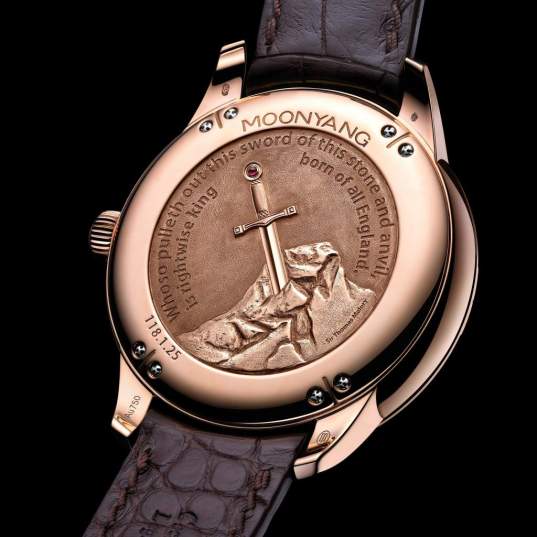 The Arthurian link is not just via the dial’s reference to the Knights of the Round Table, but also on the case back, which depicts the well known image of the sword in the stone along with a reference to Le Morte d’Arthur.

Even without the Coudray name being known as being associated with it, this is still an impressive and interesting watch as well as an attractive one. The MOONYANG King Arthur comes in a 44mm sized (10.5mm thick) red gold case and is part of the King Sword collection. Its RRP is CHF 88,200 including taxes.