Wearing your Speedmaster the NASA way

Do you want to get your NASA Speedmaster geek on? Well look no further than modern versions of the NASA straps.

Forty-three years ago on July 21st 1969, Neil Armstrong became the first man to set foot on the moon. ‘Buzz’ Aldrin, however, was the first astronaut to wear the Omega Speedmaster Professional on the lunar surface.

NASA supplied each of the Apollo astronauts with a standard issue Omega Speedmaster Professional with a velcro strap. As is now well known, unlike almost all other Apollo equipment, the watch was not manufactured for use specifically by NASA or in space but had been on sale in retail outlets in the United States from 1957 as ‘Speedmaster’ and then as ‘Speedmaster Pro’ after its approval for NASA use. It was only through the purchase and evaluation of a number of watches including the Speedmaster that the now longstanding NASA-Speedmaster relationship bore fruit, when it was deemed the most suitable watch for the job.

Although Speedmasters were and are still sold on bracelets, if you want that authentic Earth-Moon-experience you can find Velcro straps online that are made to the NASA blueprint (see below) with the serial numbers stamped onto the tag, or straps that are ‘in the style of’ the NASA straps. They are generally available in a long version, in keeping with the original design where it could be worn over the space suit (the standard black Velcro strap used by NASA flight crews was 640 mm long) and a short version for those days when your space suit is at the dry cleaner.

This strap (the one in these photos was purchased on the Bay) gives a very different look to the Speedy, is of a good solid construction and not ‘cheap’ quality wise considering their price. Even the short version pictured here is long enough for a large wrist. I’m not a NASA (or Speedy) nerd, and never thought I’d take the bracelet off my ‘Snoopy’ Speedy, but changing to this Velcro strap has not only given a radically different look, but it has made it more comfortable, and a whole lot more fun. I’d recommend getting one of these straps without any hesitation, but given that there are a couple of people making these, I would advise doing some research before choosing one. You can get them starting from about $20 (excluding postage) going up to several times this amount. 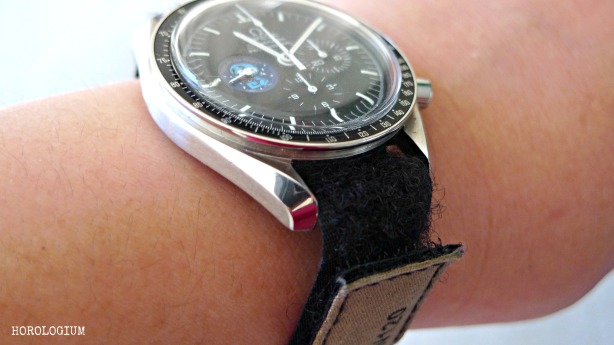 The history of NASA and space travel has its unsung heroes. In ending today’s post, I’d like to introduce you to some of these – the seamstresses behind the first American space suits. They worked for International Latex Corporation and you can read about them here.