We all know the background. Omega’s relationship with NASA dates back to 1965, when the Speedmaster was declared “flight qualified for all manned space missions”. It went (literally) upwards and onwards from there.

The relationship between Snoopy and things lunar also dates back to the 1960s, when creator Charles M. Schulz put Snoopy on the moon in comic strips, but it wasn’t until 1968 that a relationship with NASA was established when the U.S. space agency chose Snoopy as its mascot for its safety programme as a ‘safety watchdog’ and also representing the success of a mission.

On May 18, 1969 ‘Charlie Brown’ and ‘Snoopy’ became the names of the command and lunar modules respectively, for Apollo 10, as well as unofficial mascots for the mission. Schulz drew a picture of Charlie Brown in a spacesuit and hid it on board to be found by the astronauts once they were in orbit.

For this new 2020 Speedmaster ‘Silver Snoopy Award’ 50th anniversary watch, we have to go back to a certain operation.

During the Apollo 13 mission in 1970 an oxygen tank exploded on board two days after launch, whereupon the crew was moved into the Lunar Module. The next several days were fraught ones for the crew and ground control at NASA. Because the mission had drifted off its course, the module would re-enter Earth’s atmosphere at the wrong angle. To manually re-adjust the course, a precisely 14-second burn of the engine was required. Without their digital timers, the crew used their Speedmasters to time the burn. The manoeuvre worked and they splashed back safely on the 17th of April.

NASA’s love affair with Snoopy lead to their creation of the Silver Snoopy Award, given to people or companies whom they believe have contributed significantly to “the success of human space flight missions.” In recognition of its contributions to U.S. space exploration and for the part played by their watches in the Apollo 13 mission, Omega received a Silver Snoopy Award on Monday, October 5, 1970. Now, this new Speedmaster, launched on October 5, 2020, has been created to commemorate fifty years since this award was given.

Given the multitude of limited edition Speedmasters that have been released over the decades, it was perhaps somewhat surprising that it took until 2003 for Omega to release a Snoopy Speedmaster commemorative piece.

The starting point was the regular 42mm Speedmaster Professional, to which some additional details were added – the illustration on the sub dial at 9 o’clock, and the colourful illustration of Snoopy in his space suit floating in space on the case back with “Eyes on the Stars” above him. There were 5,441 made, with the number taken from the length of the Apollo 13 mission – 142 hours, 54 minutes and 41 seconds. Inside was the manually wound Calibre 1861, the successor to the Calibre 861 which had taken over from the Calibre 321.

It had been assumed that this model would be a one-off, but 2015 saw the arrival of the Speedmaster Apollo 13 Silver Snoopy Award marking forty-five years since the award, in an edition of 1,970 pieces. The acquisition of the Ref. 311.32.42.30.04.003 at the time was, to put it mildly, best described as a mass state of high emotion, with many missing out.

Unlike the original model, the dial became white. Snoopy stayed on the sub dial at 9 o’clock but in a different form and with “Failure is not an option” in a thought bubble. Lume was a bigger feature, and there were some other cosmetic changes, such as the panels making up the first 14 seconds of the dial (the number referring to the aforementioned length of time of the controlled burn of the lunar module’s engines lasted as the astronauts controlled their trajectory to put them on course for Earth). The new dial was also covered with sapphire rather than the hesalite of the 2003 original. The case back changed from being colourful to having an engraved silver medallion atop a blue enamel base.

Perhaps, given the tumult surrounding what happened five years ago, it was inevitable that there would be another Snoopy Speedmaster edition released for this particular anniversary, and to avoid a repeat of the disappointment expressed by so many in 2015, this new one is unlimited in production number. 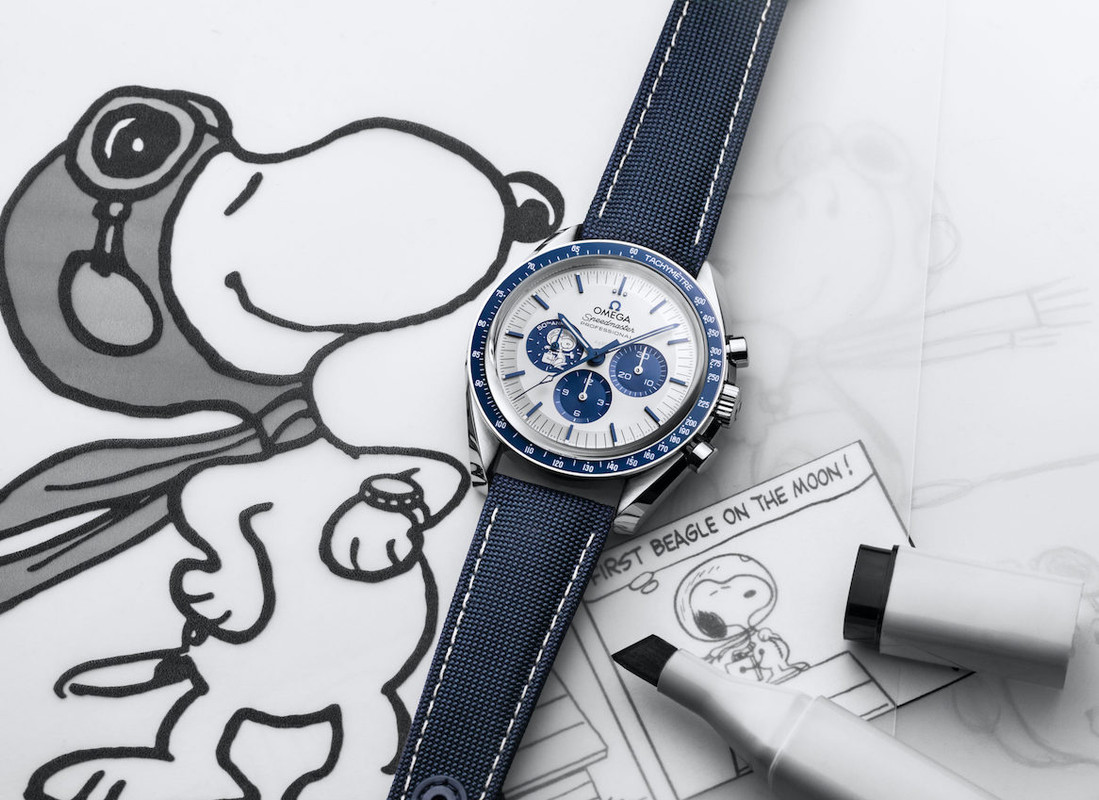 Coming in a 42mm steel case with a water resistance of 50m, the dial under the sapphire crystal of this new 50th anniversary model is silver and laser engraved with ‘Ag925’, featuring Snoopy in an embossed silver medallion on the blue sub dial at 9 o’clock. He is back to wearing his space suit in this new model, with this image selected because it is the same as that on the silver pin given to Snoopy Award recipients. 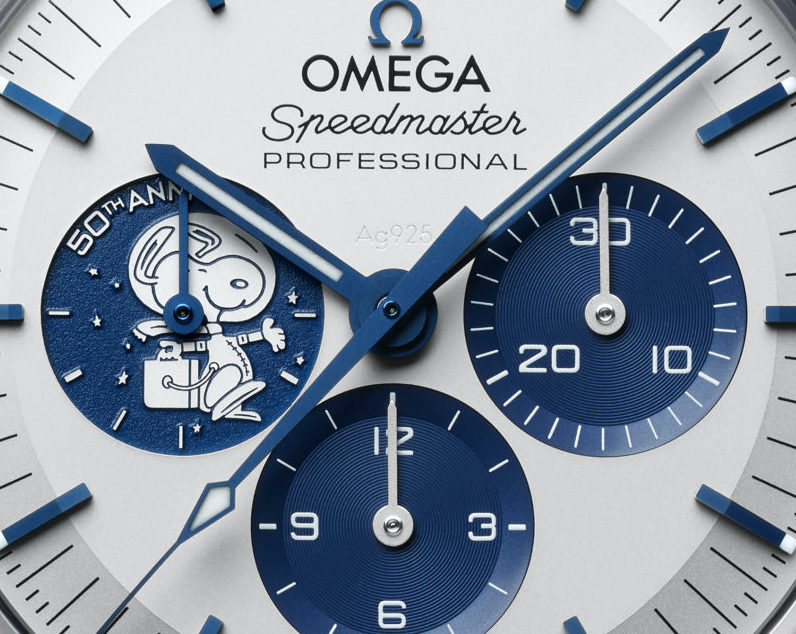 The blue theme for this piece is not in the sub dials. The hour markers and hands are blue PVD and the tachymeter scale is in white enamel on a blue ceramic [ZrO2] bezel ring. The tachymeter features the ‘dot over 90’ (rather than ‘next to 90’) in tribute to the ‘dot over 90’ bezel used on pre-1970 Speedmasters. On the case back are tributes to both Snoopy and Apollo 13. Snoopy appears inside an animated black and white Command and Service Module (CSM) on a special hand. When the chronograph seconds hand is activated, Snoopy takes a trip around the far side of the moon, which has been decorated on the sapphire crystal using micro-structured metallisation. There is also an Earth disc which rotates once per minute in sync with the watch’s small seconds hand. “Eyes on the Stars” is, of course, present. As well as the engraving referencing Apollo 13 there is also a nod to the date in 1970 when Omega received their Silver Snoopy award.

Inside is the manually-wound Co-Axial Calibre 3861. With rhodium-plated finishing, bridges with Geneva stripes and fifty hours of power reserve, it is a METAS-certified Master Chronometer, and resistant to magnetic fields reaching 15,000 gauss. 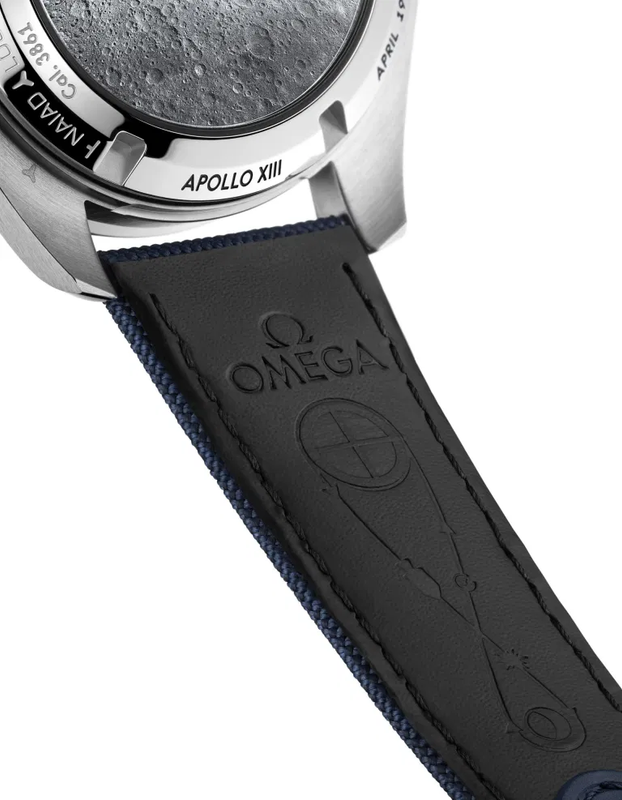 This new Snoopy Speedy comes on a blue nylon fabric strap that matches the other blue parts of this model and which features the trajectory of the Apollo 13 mission on the embossed lining. Or if you like to play around with your straps, you could track down one of these, which is what I have on my 2003 Snoopy Speedmaster.

Coming in an Apollo 13-themed presentation box with a microfibre cleaning cloth, brochure, and loupe, it comes with Omega’s standard five year warranty and will not be limited in production.