Although launched by A. Lange & Söhne five years ago, the Zeitwerk Minute Repeater, the first wristwatch that combined a mechanical jump hour with a decimal repeater, more than retains its originality and achievement. Now, as a follow up to that platinum model, Lange have announced a new limited edition (thirty pieces) in white gold with a solid silver dark blue dial and a rhodium-treated German silver bridge. The case is identical in size and finish to the first model, measuring 44.2mm with a thickness of 14.1mm, and featuring a combination of polished and brushed surfaces.

The digital display consists of an aperture on the left for hours with a single disc running from 1 to 12, and one on the right for the minutes, indicated on two discs – one for the ‘10 minutes’ and the other for single minutes.

For those unfamiliar with a decimal repeater, its striking mechanism sounds ten minute intervals instead of quarter hours, with double strikes. The repeater is activated by a pusher at 10 o’clock. As soon as this is done, it sounds the time indicated on the dial – the gong hammer on the left strikes the hours, the one on the right, the single minutes. For the double toned ten minute (decimal) intervals, both hammers strike the gongs slightly offset. So that means a low pitched gong (from the left) for every elapsed hour followed by double tones striking for each elapsed ten minutes, and then the higher toned strikes, one for each minute.

That the striking mechanism is activated by a pusher and not the traditional slide is worth noting. As the power for the striking mechanism is delivered by the mainspring barrel, there is no need for a slide to tension a separate spring. This also means that there is no large opening in the case, which reduces a source of disruption to the sound. As a bonus, a pusher can be sealed, which means that the case has a water resistance of 3 bar, although it is probably best left dry. 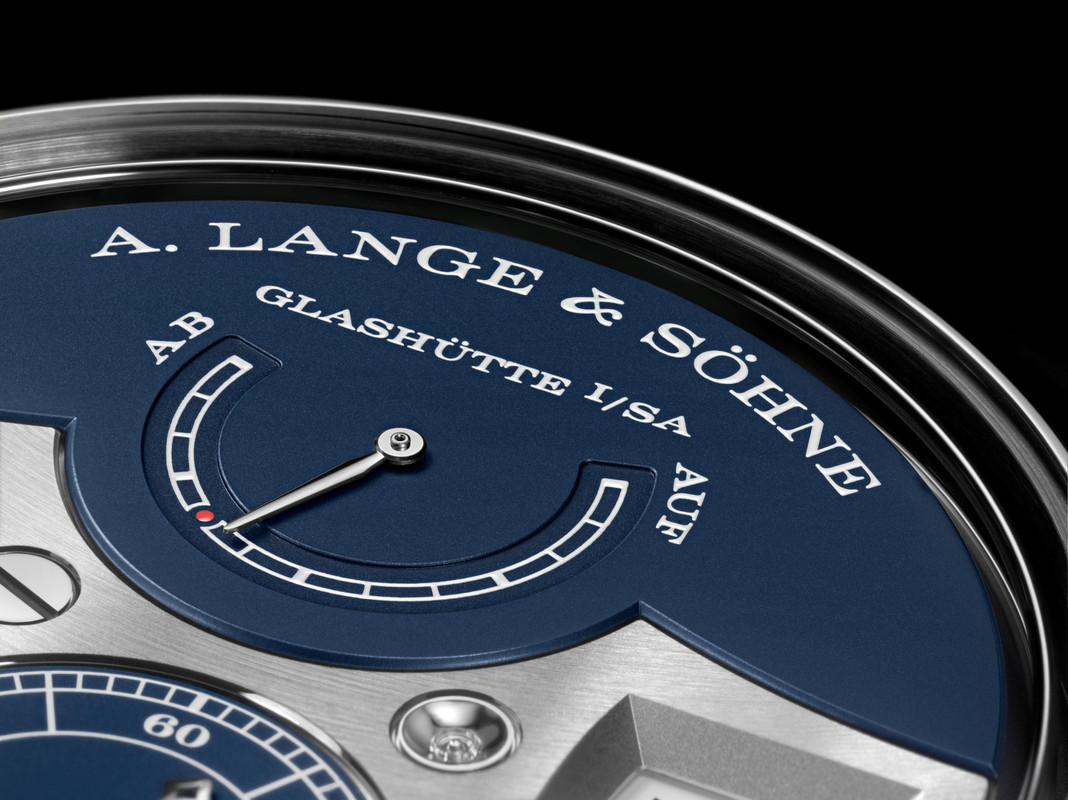 This is a watch for those with a love of visual symmetry as well as mechanical prowess. The power reserve indicator at the top (with a red dot indicating the 12 hour mark) is counterbalanced by the small seconds counter at 6 o’clock. The polished hand-tuned gongs and two black-polished hammers are positioned on both sides of the silver bridge and subsidiary seconds dial, forming part of the design of the watch; a case of function and form marrying seamlessly. Because the gongs are arranged alongside the bridge, they face inwards rather than the traditional outwards. 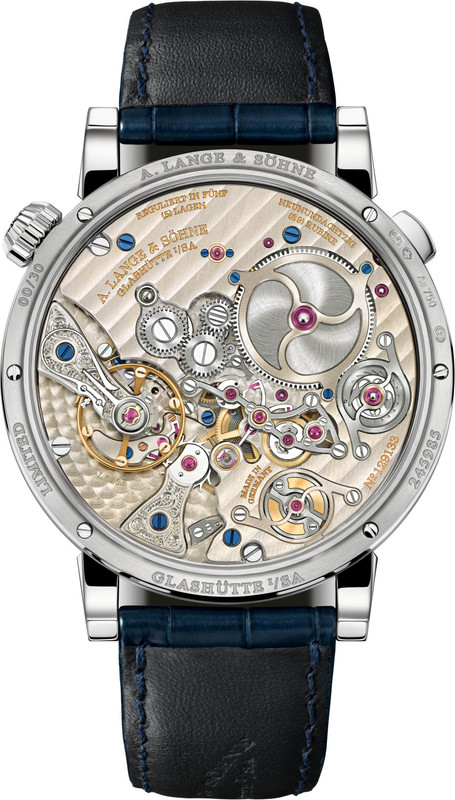 Inside, the manually wound in-house Calibre L043.5 features the recognisable Lange three-quarter plate made from untreated German silver and decorated with Glashütte ribbing. The balance cock and escape wheel cock are hand-engraved with a floral motif. Three of the 93 jewels are set in screwed gold chatons. Beating at 18,800 VPH, the power reserve is 36 hours, but when it drops below twelve hours, the striking mechanism is blocked to prevent damage to the movement. Since there is a red dot on the power reserve indicator, you will know when this is going to happen anyway.

There are some other safety features to the Zeitwerk Minute Repeater. The discs with the numerals are prevented from changing until a repeater sequence has completed, as a switching action when the repeater is running could cause problems for the movement. Similarly, the crown cannot be pulled out when the striking mechanism has been activated. The activation of the repeater pusher uncouples the wheel train of the winder from the ratchet wheel that drives the striking mechanism. This prevents the wheel train of the winder, including the crown, from rotating during the repeater sequence, which would result in an unnecessary loss of energy. 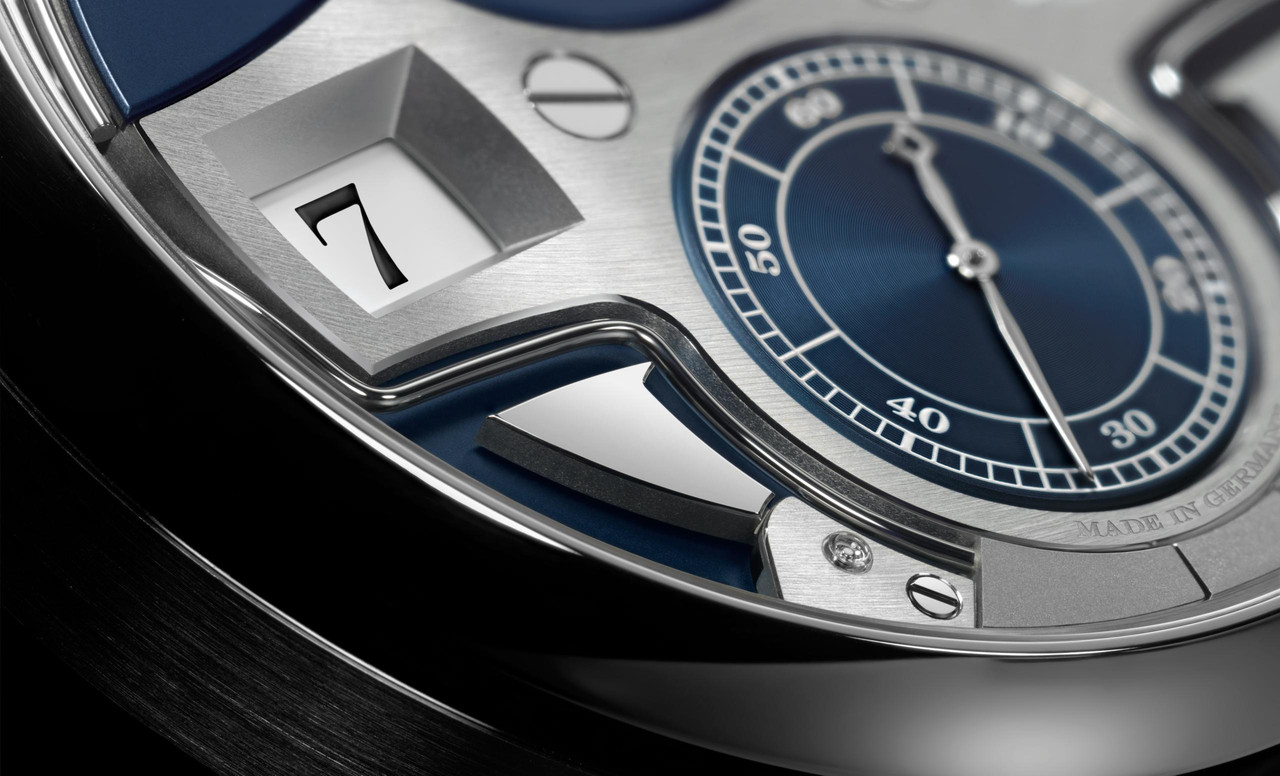 As is the case with its Zeitwerk siblings, the Minute Repeater features a patented constant-force escapement between the barrel and the balance that also assists in the instantaneous advance of the numerals discs in one-minute intervals.

Coming on a blue hand-stitched leather strap, the new limited edition Zeitwerk Minute Repeater White Gold is available exclusively at A. Lange & Söhne boutiques with a price of EUR 449,000.