Well they did it.

We just found out the answer. You can, at a price, own one.

With a scarcely believable ‘thickness’ (in a rather loose meaning of the word) 2mm Altiplano Ultimate Concept took four years of research and development to create, and it has taken the last two years of further work to get it to a point where it can be commercially produced. But if anyone was going to do something this horologically outrageous, it was going to be Piaget. There is simply no other brand with the same extensive history and pedigree when it comes to ultra-thin watches. To read a bit about it and some records they have broken in recent years, go to the link in the first paragraph and also this old post. It is worth bearing in mind that the 2mm thinness of this new production model Altiplano Ultimate Concept is the same thickness as the manual-wind Calibre 9P of 1957, when this all began. 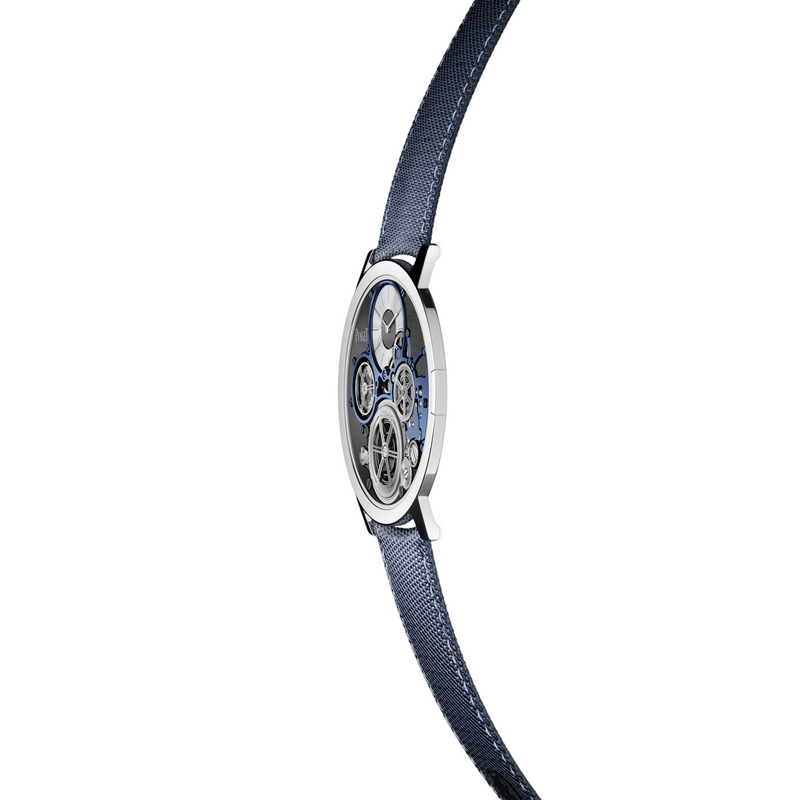 With the 2mm thickness at the forefront of their minds, it was deemed too thin to use gold, so they looked at the space industry and found a cobalt-based alloy that was both rigid and scratch proof and moreover, allowed for coating with a variety of finishes. It is 2.3 times stronger than gold, as well. With an integrated bezel, the watch measures 41mm. The case back is both part of the case and the movement mainplate, made from a single block. This aspect at least may already be familiar to those who follow the recent history of the Altiplano in the form of the Altiplano Ultimate Automatic, which was just 4.3mm thick. 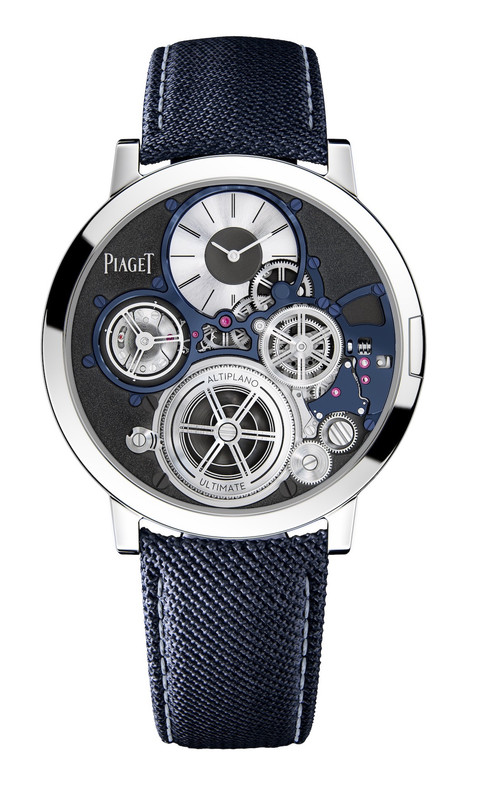 The case features short lugs and a flat crown produced from this cobalt alloy. The crown is integrated with the case to protect it (and thus the movement) from shock. As for the crown itself, it is telescopic and replaces the traditional sliding pinion clutch and crown wheel for a single ‘infinite screw’ as Piaget call it, and comes with a specially designed winding tool. Related to this, the off-centred position of the dial also meant that they could not use a standard straight winding stem so it is a patented one that is not straight. 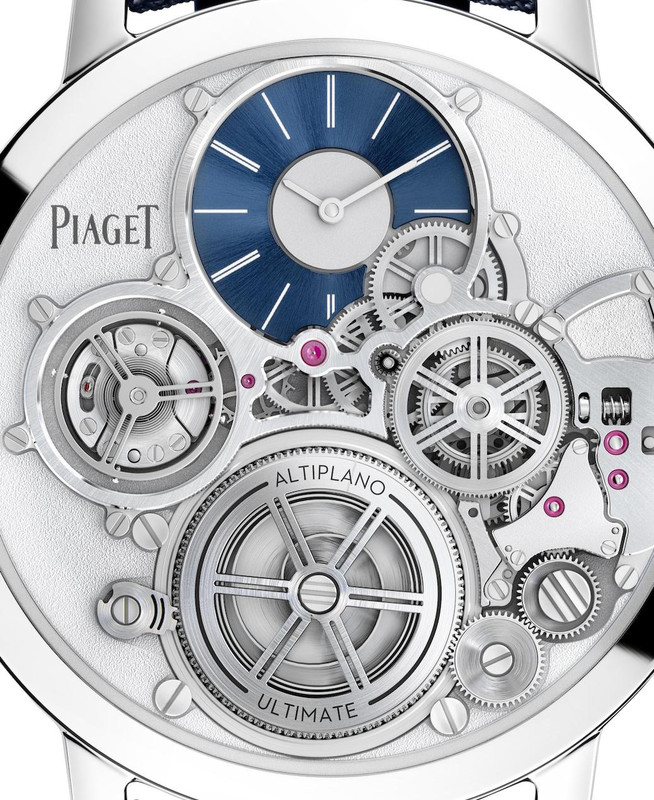 The dial of the Altiplano Ultimate Concept is covered by a 0.2mm thin sapphire crystal (as compared to the more common 0.8mm). It is flexible so that if pressure is applied to the sapphire, should it be pushed down from some sort of impact, the potential of damage is minimised. Whilst tolerances are normally built in to prevent the crystal touching the movement, for the Ultimate Concept, bridges were placed so that the crystal would touch them rather than the balance wheel. So instead of having a dial and hands on top of a bridge, the dial lies under it. This is a pre-existing patent already developed and used by Piaget. The balance wheel can be found on the dial’s left side, while the inner workings of the crown system are visible on the right. 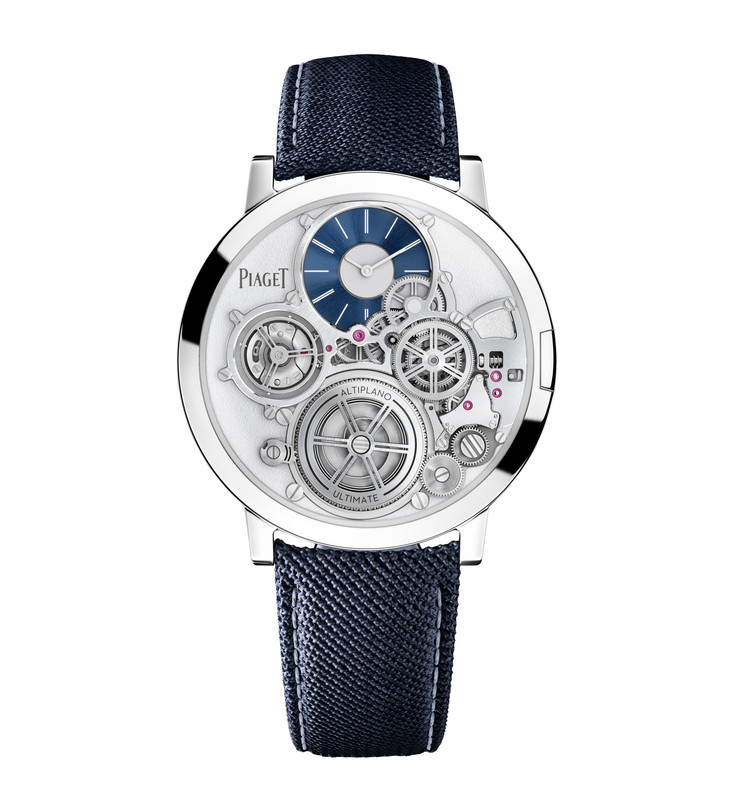 What powers the Altiplano Ultimate Concept is the manual-wind in-house Calibre 900P-UC with 13 jewels that beats at 28,800 VPH. With 167 parts, it features sunburst and satin-brushed finishes, chamfered and polished bridges, and PVD treatment on the mainplate/ case.

Many parts had to be completely re-engineered and miniaturised. Wheels reduced from a conventional 0.20mm to 0.12mm. The redesigned mainspring barrel that has no cover or drum but is mounted on a single ceramic ball-bearing within the frame of the watch and still manages to give the movement a forty hour power reserve. Another thing that was done was to eliminate the need for Incabloc shock protection and jewels, replacing them with ball bearings – five to maintain the gear train and oscillator. 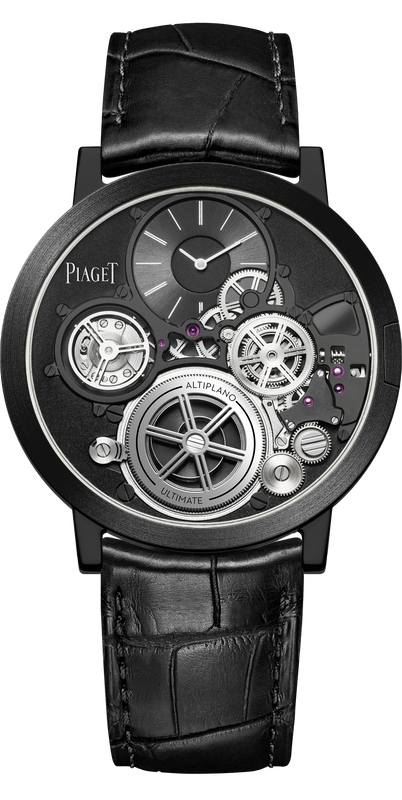 The Altiplano Ultimate Concept is going to be able to be customised. The fortunate few can specify the colour of the bridge and dial, the finish of the hands and the main plate, and select straps, although there are three ‘basic’ ones that are suggested. Piaget claim that there are move than 10,000 combinations and permuations, but who’s counting? Should you own one, the chances of meeting someone else with one are small enough, let alone one whose watch is identical to yours. The capacity is to only make about three or four of these pieces per annum because there are only two Piaget watchmakers who can assemble it. 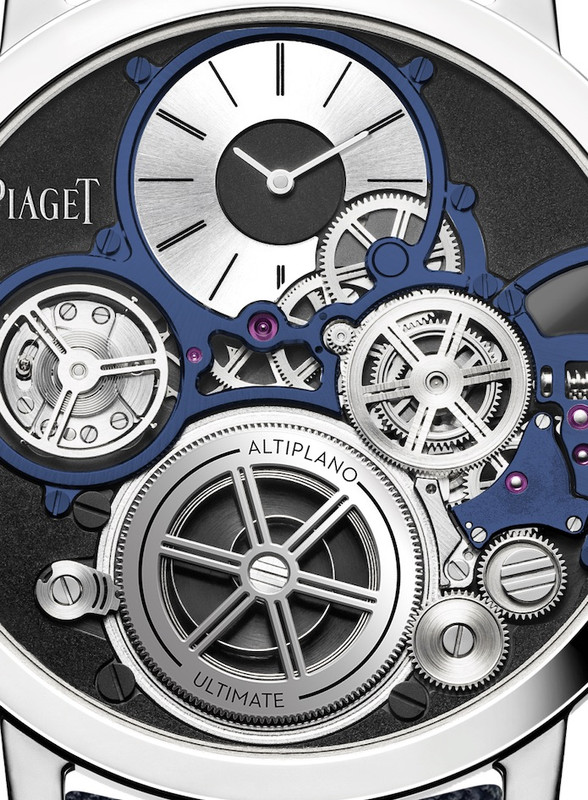 With such a slim watch, that obviously has to extend to the strap as well. Alligator, rubber or what they call a ‘blue baltimor technical textile strap’, both of which are ultra-thin, featuring a velvet calfskin lining and kevlar, along with a matching ultra-thin cobalt pin buckle.

Because this is slight of form even by Piaget standards (the thickness of a 1 EUR coin) it is natural, despite knowing that the case material’s toughness is over two times stronger than gold, to worry about how it might stand up to ‘everyday use’. But they reassure everyone that the Ultimate Concept has been made for wearing, and (to quote) “tough enough to withstand everything from the level of G-Force experienced in an aerobatic jet to the force of a meteorite crashing to Earth”. I guess the only way to know is real life testing, and I’m happy to offer my services.

How much will this cost you? Well even with the ability to customise there’s still a starting point – CHF 410,000.