Today we are bundling two new Heritage Collection releases from Longines together. The first of these is the most recent, that of the limited edition Military 1938.

You may recall our post last year about the Longines Heritage Military, which was based on a watch supplied to the Military of Defence/ British RAF during WWII (Mil-spec 6B/159) that was given to pilots and supplied by Longines, amongst others. The original Milspec watches featured a white dial with black Arabic numerals, centre seconds, and blued steel non-luminous hands.

Before this there was also a Heritage Military model which was a re-issue based on a Longines Museum piece from 1918.

With an even more similar name, back in 2013 Longines launched the Military Heritage 1938 collection which consisted of three pieces — the three hand, the 24 hour, and the chronograph, all of which featured a matte black dial layout with large white Arabic numerals, a minute track, and lumed hands and indices. 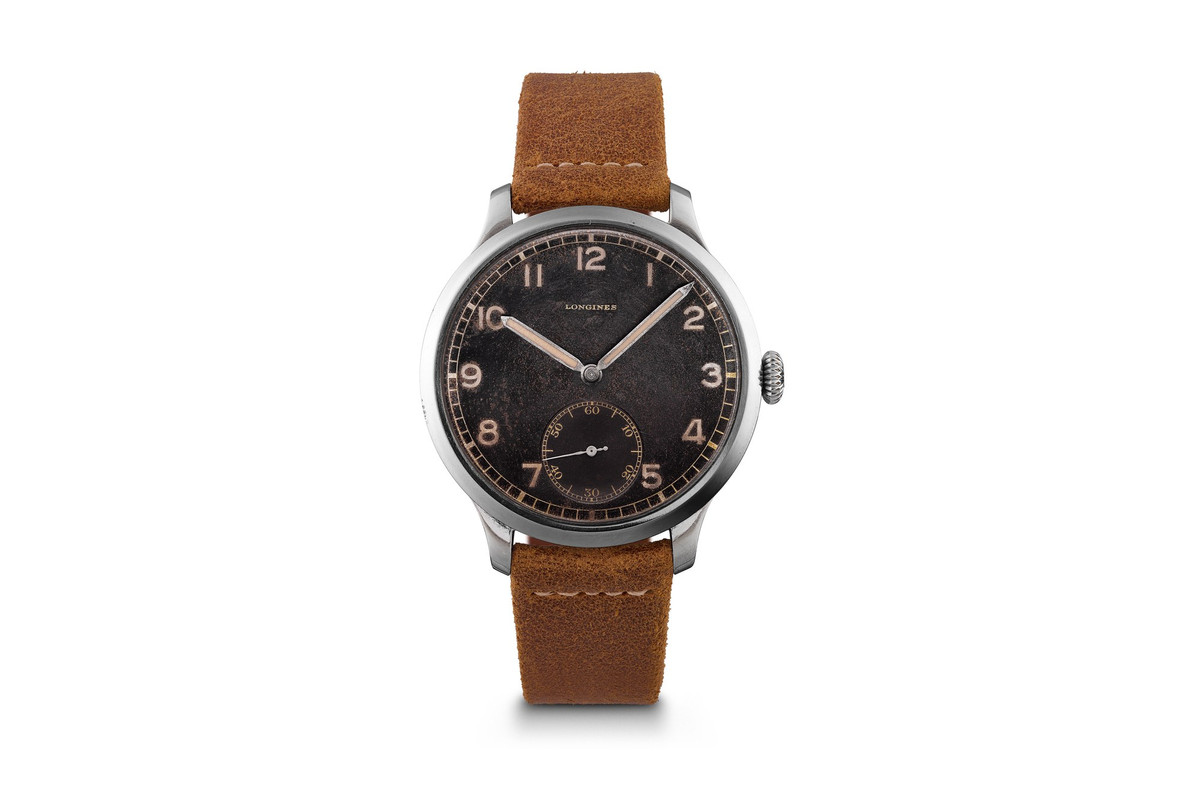 This latest model, the Heritage Military 1938, (Ref. L2.526.4.53.2) comes in a limited edition of 1,938 pieces. It is also a modern reissue of a watch from the brand’s museum. In a 43mm stainless steel case, it has a matte black dial with rhodium-plated baton hands and ‘aged look’ cream-coloured Arabic numerals (both with Super-LumiNova), a railway minute track, printed logo, and a small seconds sub dial with its own track, Bonus – there is no date window as there was in the aforementioned 2013 Military Heritage 1938 version. 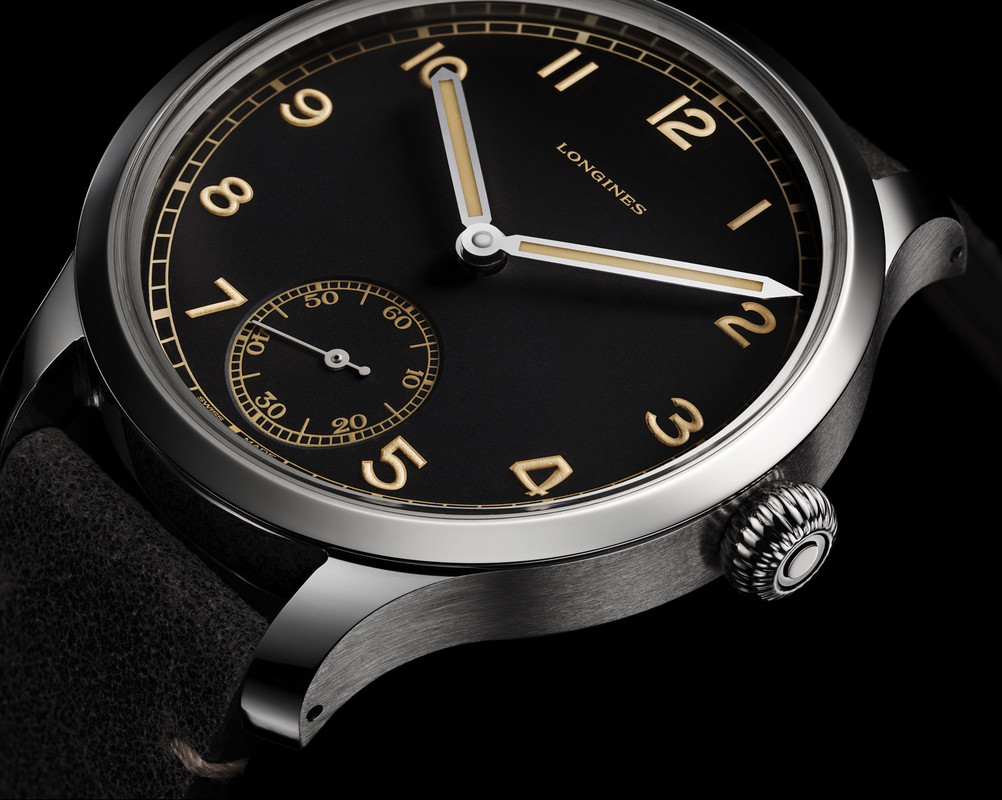 Happily, in keeping with the era of the original and again unlike the 1938 Collection, this new model uses a manual-wind Calibre L507.2 (ETA 6498/2) which beats at 21,600VPH and has a power reserve of 53 hours. With a water resistance of 30m it’s best to keep it dry. The decision to use a manual-wind movement makes an already handsome watch even more attractive.

The Longines Heritage Military 1938 comes with charcoal grey leather strap and a cognac-colored NATO-style leather strap, easily swapped using a tool included in its packaging. Each piece is numbered xxxx/1938 and the RRP is EUR 2,360.

The second new model is the Heritage Classic (or if you like, the Heritage 38.5 Small Seconds Sector Dial). With this piece, Longines pays tribute to a 1934 sector dial Longines Museum piece in a new 38.5mm sized stainless steel watch. In fact the case is the same as on the Longines Heritage Military mentioned earlier. Most notably (but not solely) used by Jaeger-LeCoultre in recent years, the sector dial form is one of particular appeal to many who like watches from that era. 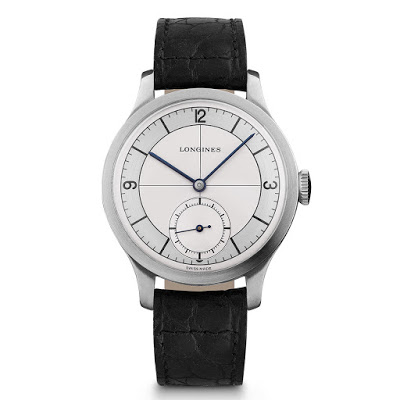 Even if it wasn’t based on a vintage piece, with its classical central silvered opaline disc surrounded by a satin finished disc and small seconds in striated silvered opaline, not to mention blue stick hands, the look of this new Classic ticks the ‘sector boxes’, as it were. Even the cut ‘6’ works.

Unlike the brand’s common tendency when it comes to the Heritage pieces, in this case there is no new date window, leaving the dial clean, unadorned with any extras, and better for it. This is a faithful reissue and still timelessly good looking. 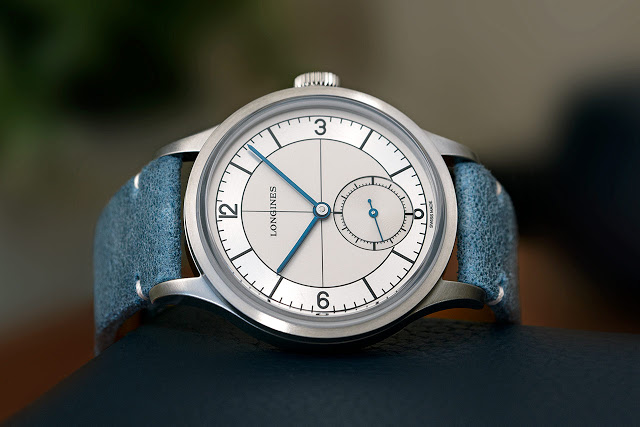 Strap wise, you can choose between either a black or blue leather strap. You get a second colour matched denim-effect NATO strap along with a strap-changing tool. The RRP for the Heritage classic is a fraction less than that of the Military 1938 – USD 2,150/ EUR 2,050. 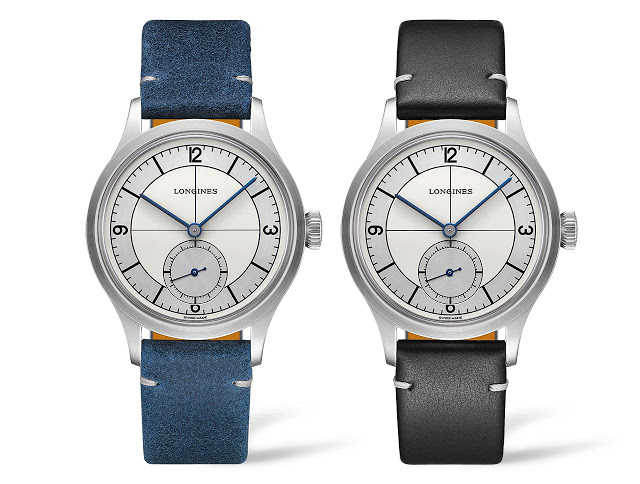 This watch was formally launched around a month before the Heritage Military 1938, but we are sharing them together not just because they are from the same collection family, but also because there is likely to be an overlap between people who like the two. They are also closely priced, which means that for someone looking for a modern watch whose aesthetics and history are rooted in that era, size difference notwithstanding (and recognising that this might be a big factor for some people), they provide two attractive and possibly competing, options.