Home › Brands › Glycine › A look at a vintage Glycine Airman

A look at a vintage Glycine Airman 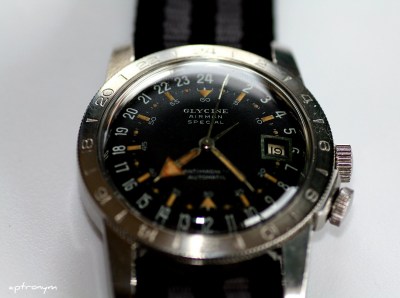 Founded in Bienne in 1914 by Eugène Meylan, for a company whose modern history has been closely tied to functional and “tool” watches, it is interesting to note that Glycine’s early commitment was to create the smallest movements possible for women’s watches in gold and platinum cases, often highly jewelled, and to target the luxury market.

The company continued in this way, even presenting an automatic movement in 1931 (although it did not eventuate into long term production because of lack of capital) and launching a chronometer range in 1934, but it wasn’t until 1953 that their iconic model the Airman, was born.

During a Bangkok to Calcutta flight, Samuel W.Glur from Montres Altus S.A. (which merged with Glycine in 1960) somehow got into a dicussion about the usefulness of a 24-hour watch with the pilots operating on that flight. As a result, he wrote a letter to Charles Hertig Sr., then head of Glycine, outlining the criteria for a 24-hour watch that could be useful to pilots. This formed the genesis for the Airman.

It turned out to be a stroke of genius, and the Airman became popular with both military and commercial pilots, worn by so many USAF pilots during the Vietnam War that it was the number one selling pilot’s watch in the US. 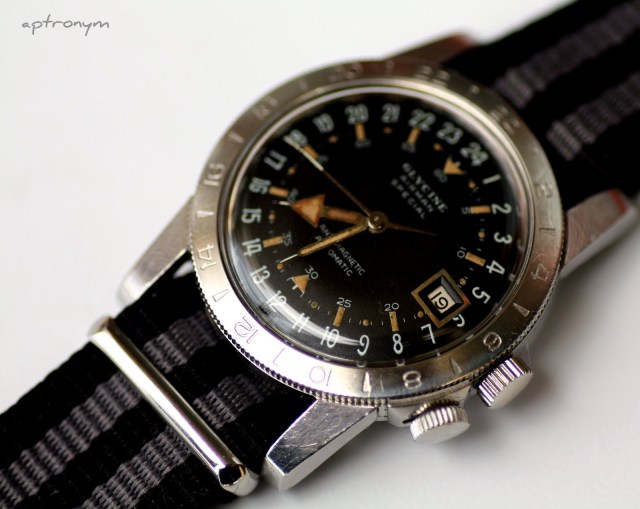 The original Airman was developed in close cooperation with pilots of civil and military aviation. Featuring 24 hour numbers, 5 minute numbers and a minute/ seconds scale and with a rotating bezel for a second timezone, it is also well known for its “hacking seconds”. This means that when you pull the crown out on the Airman, the seconds hand will tick along and stop at 12, allowing for greater accuracy/ synchronisation.

With the exception of the period of 1990-1998, which was a period of dormancy, the Airman’s modern variants continue to be a mainstay of their production, although many of the characteristics of the “old Airmans”, such as the mineral domed crystal and “cross hatched” crown in particular, are no longer there.

Numerous movements were used during the period of the Airman’s peak (1953-1978), and there were a number of variations such as the dial (black, white, champagne) and the date indicator (red, black). For an in-depth look at the Airman and its history, including a listing of all these variants, this is the definitive site, but here is a quick summary of the movements : 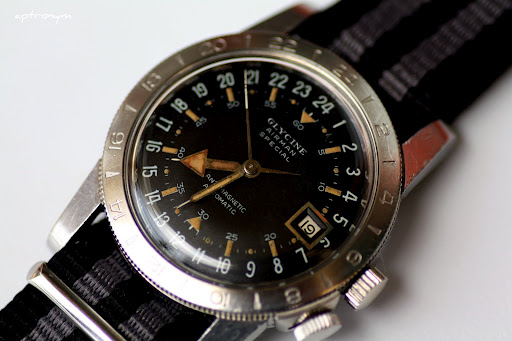 This model is a Glycine Airman Special (there were both “Glycine Airman” and “Glycine Airman Special” models) with an automatic Felsa 692 movement, which puts it in the 1953 – 1960 range of production. I was told by the dealer that my model is from circa 1958. It has the black date indicator rather than the red one, and a working hacking seconds. I admit that my first choice had been for a red date indicator (and a cross hatched crown), but in the end, this watch was priced too attractively to pass. 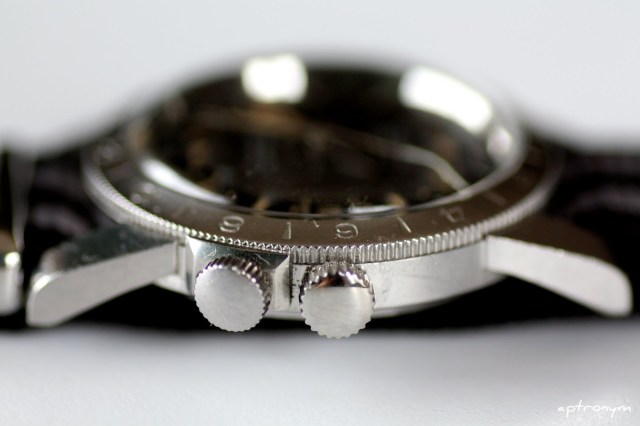 As you can see, this one has definitely been “well loved”. Dings, bezel numbers faded and the hands showing discolouration. I had the hands checked, and was told that the rust is stable and will not get worse, so they have been left “as is”. 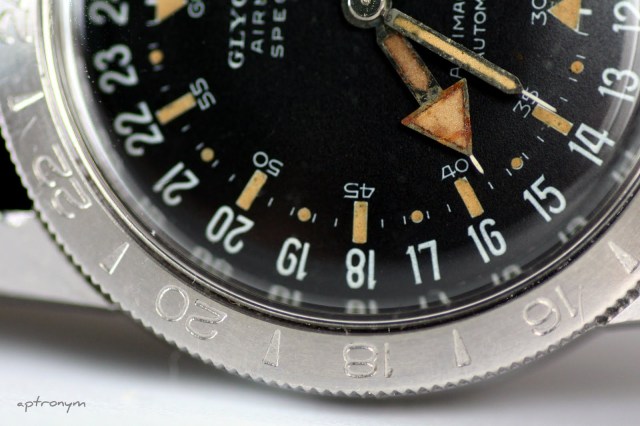 At 36mm, this is a small watch by modern standards, and some of the modern Airman iterations have been much larger than this, though there is 38mm version currently available.

It came on a NATO strap, which I know that many people like, but although it looked quite good, as I am not much of a NATO person, I bought a leather Glycine strap, which I find more attractive and more versatile.

I don’t remember what it was about the Airman that first attracted me to it, but despite having bought this not only sight unseen (there were photos on the website) but also without having previously seen a vintage Airman in the flesh, there was always going to be the risk that the connection would not be there once I received it.

Happily, this has not been the case. For all its dings, the chip on the lug, the state of the hands and the fading of the bezel numbers, this is a watch that I have fallen in love with. It has personal character along with the history, sits comfortably on my wrist and, after the first week or so of being a bit disconcerted by having to remember that it’s a 24-hour watch, is actually a lot of fun time-reading wise, as well.

A final thought – Modern Airmans cost more than vintage ones, so why would you choose to get one of the former?