HANDS-ON : Omega Speedmaster Dark Side of the Moon Apollo 8

Although Omega’s main focus at this year has been on its Seamaster and Seamaster Diver collections, there has also been an addition to the Speedmaster Dark Side of the Moon series of watches which commemorates the Apollo 8 mission, which was launched on December 21,1968 and entered lunar orbit on December 24, 1968.

The new model has not actually started Australian deliveries yet, but a prototype of the new Apollo 8 piece spent some time at the Sydney boutique not too long ago, and we fortuitously managed to take a quick look at it on its last day here.

Marking fifty years since the Apollo 8 mission, the second manned spaceflight launched by the United States, the first thing you notice about the Speedmaster Dark Side of the Moon Apollo 8 is that it is the first in the collection to feature a skeletonised movement, whose bridges and plates are blackened and decorated using laser ablation to to depict the lunar surface. In line with the name of the model and the collection from which it comes, the dial side is lighter (to reflect the view of the moon as seen from Earth) and the back side, seen through a sapphire case back, is the ‘dark side’ of the moon.

The new Dark Side of the Moon Apollo 8 has a 44.25mm sized black zirconium oxide ceramic case, with a thickness of 13.80mm. The case has a combination of polished and satin brushing and, as can be the case when using this type of material, it is susceptible to showing up fingerprints as you can see. The chronograph pushers are polished, and rounded on the top. The fluted crown, with its Omega letter, is polished, and not screw down. 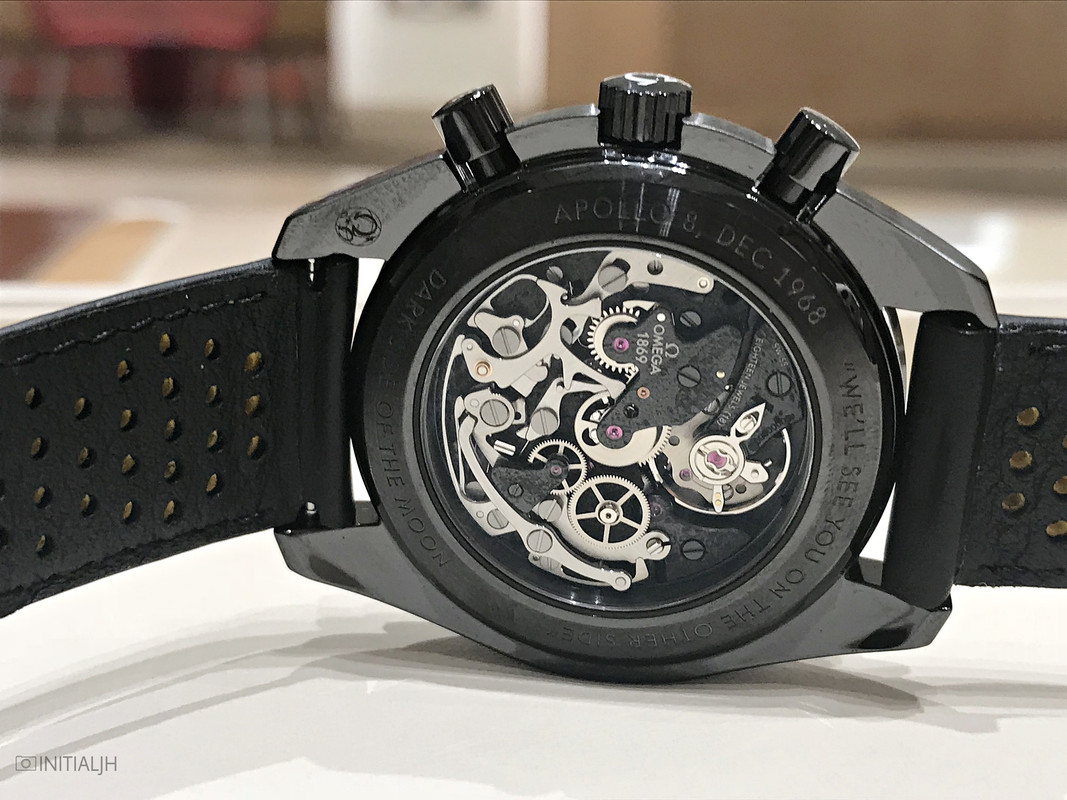 The bezel, dial, and leather strap all feature yellow elements, a colour not unknown within the Speedmaster pantheon. The yellow features include the dial’s central chronograph hand, which has a varnished finish, the small chronograph hands on the sub dials at 3 o’clock and 6 o’clock (which almost appear to float over the skeletonised movement), the word “Tachymetre”, and the tips of the hour indices. A white varnish is used for the small seconds hand on the 9 o’clock subdial, and white Super-LumiNova coats the hands and indices as well as all the indications on the bezel’s tachymeter scale.

The movement used for the Apollo 8 is the manually wound Calibre 1869, based on the Calibre 1861, but with a nickel coated balance wheel, blackened screws, bridges and main plate. The Apollo 8 is the first time the movement has been used in a Dark Side of the Moon watch; with earlier models powered by the (bi compax) automatic co-axial chronometer certified Calibre 9300. The movement has forty-eight hours of power reserve. 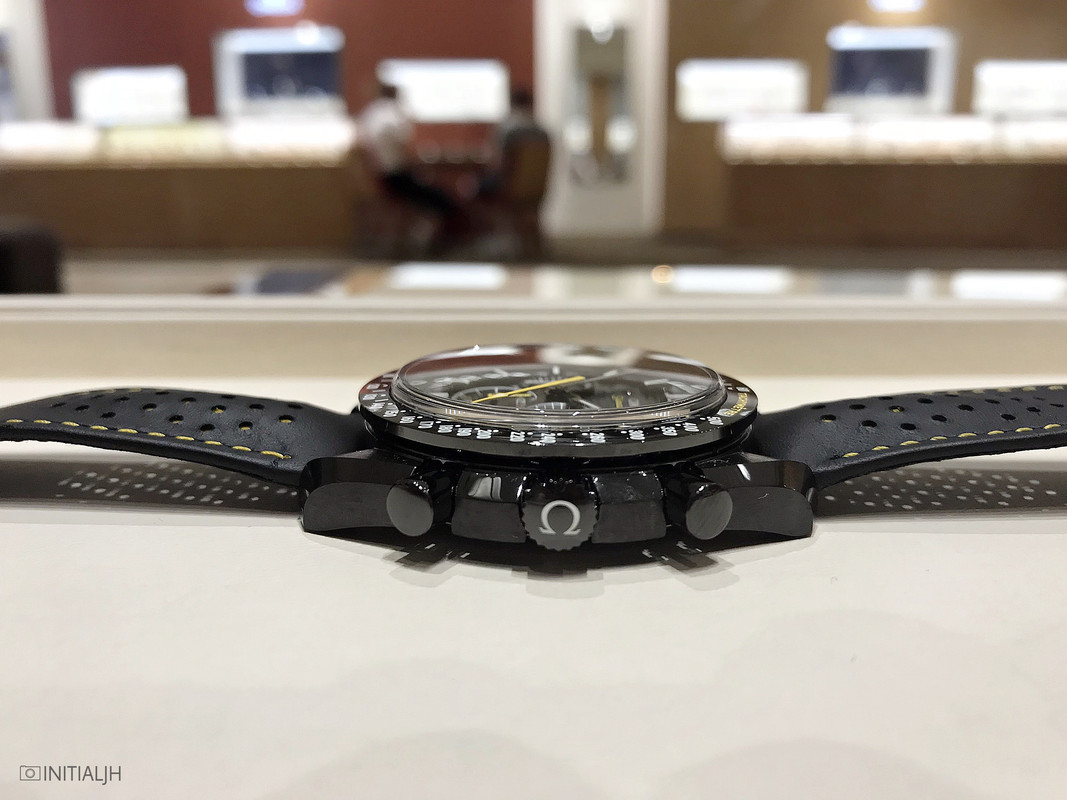 On the back of the case can be found engraved text indicating the date of the Apollo 8 mission and the famous quotation, “See you on the other side,” spoken by Command Module Pilot Jim Lovell at the start of the crew’s pioneering orbit to the dark side of the moon.

The tang buckle is made of polished black ceramic like the case and with it comes to the pebbled black leather strap, which is perforated continues the black and yellow motif of the Apollo 8. Black on both the top and the underside, the strap includes, sandwiched between these layers, a yellow rubber middle section, which can be seen through small perforations.

Throughout the decades of its life, the Speedmaster has come in a myriad of formats and colour combinations. The Apollo 8, through its choices in case material, strap and colour accent, is placed solidly into the 21st century and also within the more ‘sporty’ of the family. It might not be a very traditional looking Speedmaster, but it is a more playful addition to the Dark Side of the Moon family, and a very wearable watch.

The Omega Speedmaster Dark Side of the Moon Apollo 8 comes in a commemorative presentation box and has an RRP of AUD 11,500/ CHF 9,000.