With over eighty years of history behind this collection family for many watch lovers, and indeed arguably for the broader public, IWC has been synonymous with pilots’ watches. This is especially the case for their historical fliegers, but their modern pilots have also been a popular mainstay of their watch collection. Indeed the two have often ‘overlapped’, such as the IWC Pilots Watch Mark XVIII Tribute to Mark 11 from 2017.

Next year, at the SIHH 2019, IWC will launch the latest iterations to their pilot family, including new Spitfires, new TOP GUNs, and a continuation of their special editions honouring Antoine de Saint-Exupéry’s ‘Le Petit Prince’.

Named after the famed British fighter aircraft of the same name, the new IWC Spitfire collection is inspired by the iconic Mark 11, with all the new models containing IWC movements. The highlight of the new pieces will be the limited edition (250 pieces) Pilot’s Watch Timezoner Spitfire Edition ‘The Longest Flight’ (Ref. IW395501), which will feature the inaugural combination of the brand’s Timezoner with an automatic movement. It has been developed for pilots Steve Boultbee Brooks and Matt Jones to coincide with their flight around the world in a Spitfire.

The watch can be set to a different time zone by means of bezel rotation. The hour hand, the 24-hour display (a rotating disc beneath the dial) and the date rotate simultaneously. Inside is the new Calibre 82760, which has a Pellaton winding with components made from ceramic, and a sixty hour power reserve. 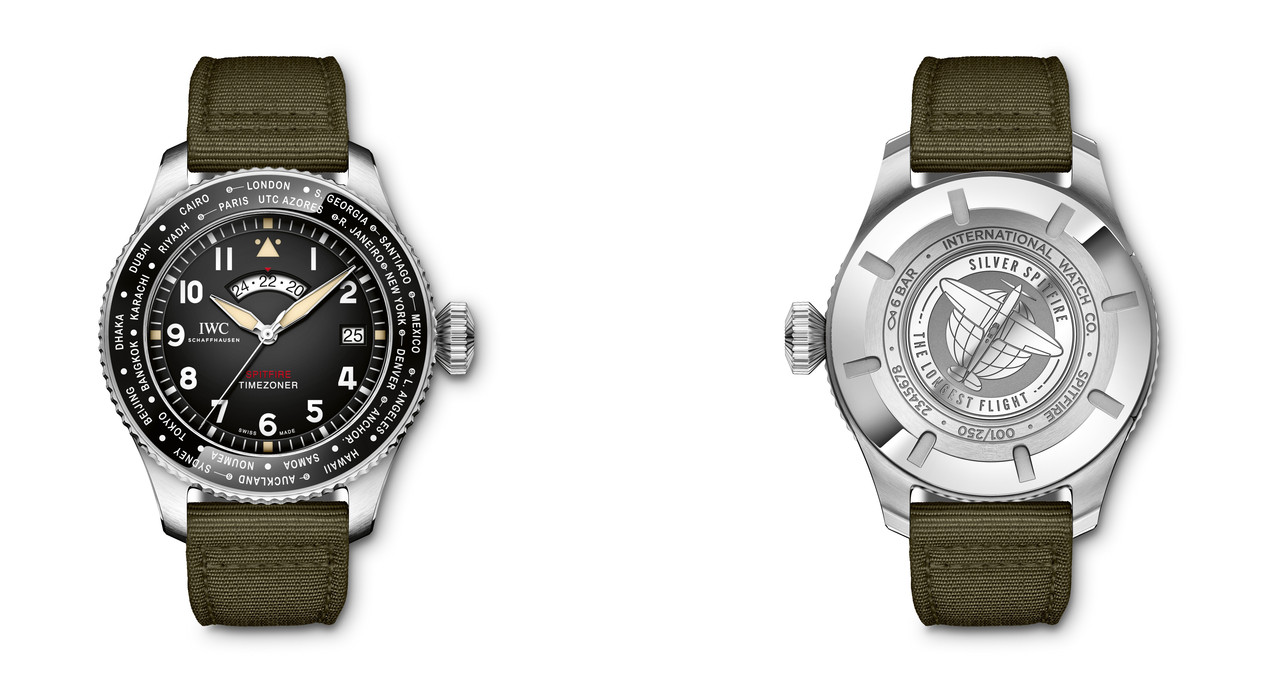 There’s actually a bit of interesting history behind the IWC Timezoner technology and how it first appeared in another brand. You can read about it at this post, as well as a description of how it works.

The backbone of the new Spitfire line is the Pilot’s Watch Chronograph Spitfire (Ref. IW387902). The 69000 Calibre family, introduced in 2016, makes its debut in a pilot watch courtesy of the new Pilot’s Watch Spitfire Chronograph (Ref. IWC387902), in a 41mm sized bronze case with an olive green dial. The Calibre 69380 is a column wheel chronograph, as well as featuring date and day displays. Its power reserve is forty-six hours. 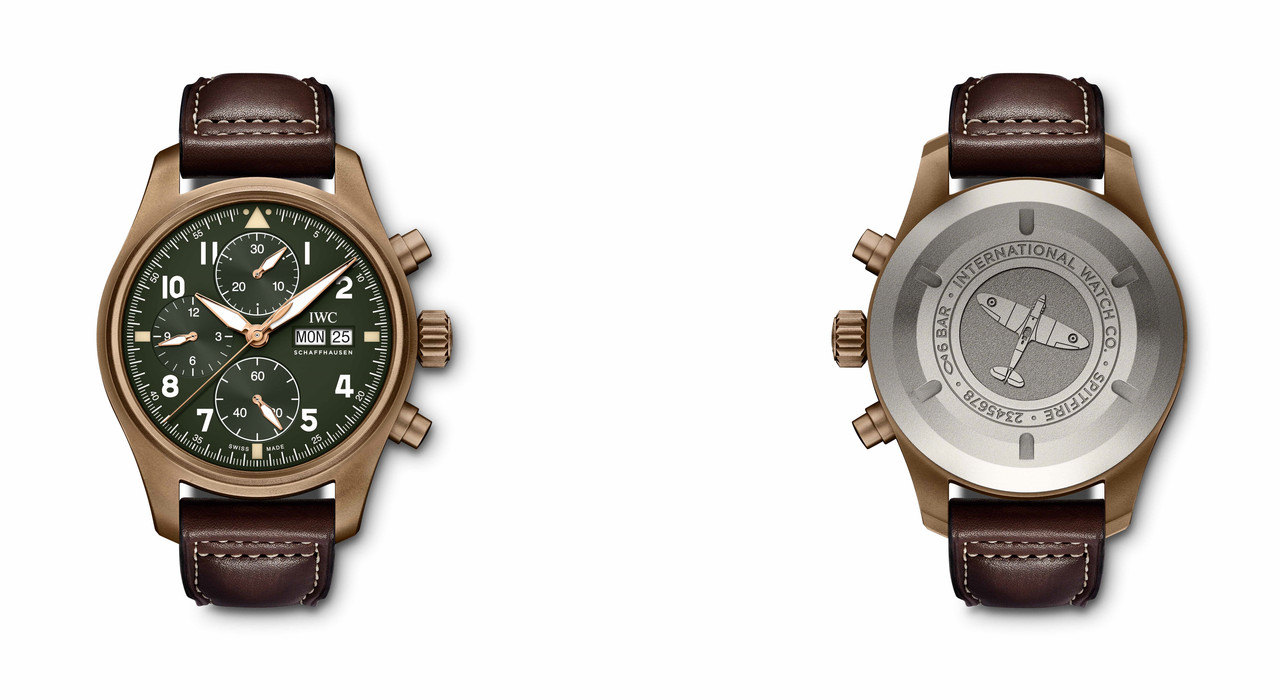 The new TOP GUN watches are the latest chapter in IWC’s partnership with the U.S. Navy’s Strike Fighter Tactics Instructor Program. They have traditionally featured some classic ‘identifiers’, such as the use of matte black ceramic cases. The SIHH 2019 will see IWC make use of new Ceratanium® for the first time in their Pilot’s watch collection (see this link for their 50th anniversary Aquatimer of the same material); and in the form of the jet black Pilot’s Watch Double Chronograph TOP GUN Ceratanium (Ref. IW371815).

Developed by IWC, Ceratanium® is a composite material that combines the advantages of titanium and ceramic. It is lightweight and unbreakable as titanium and at the same time as hard and scratch-resistant as ceramic. The use of these two materials also makes it more suitable for those who are looking for hypoallergenic cases.

The double chronograph has an integrated split-seconds hand mechanism and it is all powered by the automatic Calibre 79230, with a power reserve of 44 hours. The watch comes on a rubber strap with textile inlay.

To take a look at some recent TOP GUN watches from IWC and to read a little about the history of their relationship, click here for the IWC Pilots Watch Chronograph TOP GUN Miramar, and go to this post for a look at the same year’s IWC Mark XVIII TOP GUN Miramar.

Since 2005, IWC has collaborated with the family of French aviator and author, Antoine de Saint-Exupéry. The timepieces resulting from this partnership have been characterised by their distinctive midnight blue dials. Next month, IWC will be adding new models to this line.

The most notable of these will be the Big Pilot’s Watch Constant-Force Tourbillon Edition ‘Le Petit Prince’ (Ref. IW590303). It is the first pilot’s watch from IWC to feature a constant force tourbillon, and will be available in a hard gold case and limited to 10 watches. 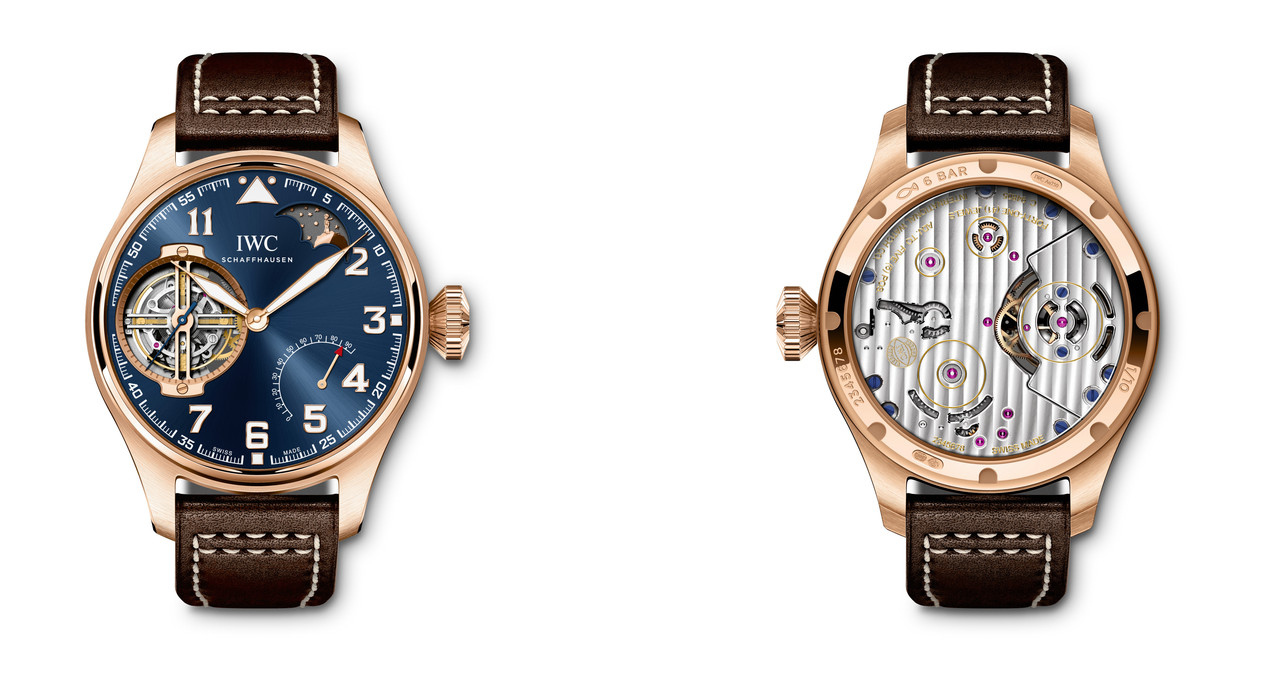 This is the first time IWC has produced a watch with ‘hard gold’, a special new variant of red gold. The brand states that hard gold is around 5 to 10 times more wear-resistant than conventional red gold. This new watch will be powered by the IWC Calibre 94805, which combines a constant-force tourbillon with a perpetual moon phase display, with the eponymous ‘Petit Prince’ standing atop the moon. Power reserve is ninety-six hours.

Those who keep an eye out for IWC’s new releases every year will know that this is not the first appearance of a constant force tourbillon, with their most recent Portugieser Constant Force Tourbillon having been released in 2017. Click on that link to compare and read about its predecessors.

People often talk about ‘brand identity’, and if new releases, be they watches or clothing or something else, fit within this identity, test its limits, or are completely outside what most people recognise as ‘that brand’. For brands with longevity and a lot of history, it can be a case of balancing the risk of completely changing in order to get a new customer base without alienating traditionalists, and wanting to maintain some visible signs of their lineage. IWC’s pilot watches have, over the years, retained the ‘classic’ and recognisable pilot watch style, with tweaks to materials, sizing, styles, and movement updates. Perhaps it is this consistency that has lead to the collection’s enduring popularity – those looking for a pilot watch with classic sensibilities but a modern touch will always know that IWC will have options for them.