Announced just before the start of the SIHH 2018, Baume & Mercier surprised everyone with a new Baumatic Chronometer (one model variant being COSC-certified), which we had the opportunity to see in Geneva.

First of all, it’s important to note that this is not about a new watch per se, but about a new movement, the Baumatic BM12-1951A. This is Baume & Mercier’s first in-house movement, developed with the assistance of the Richemont Group and Manufacture Horlogère ValFleurier.

A certified chronometer movement with 120 hours of power reserve and anti-magnetic up to 1500 gauss, its debut comes in the form of a very traditional styled Clifton model. One thing to note is that the video that accompanied its SIHH 2018 launch was very much about it being a watch with technical as well as design strengths, and with a vibe very much about appealing to young professionals who are interested in classical design but want a watch at this price point that also has something interesting about the movement as well. 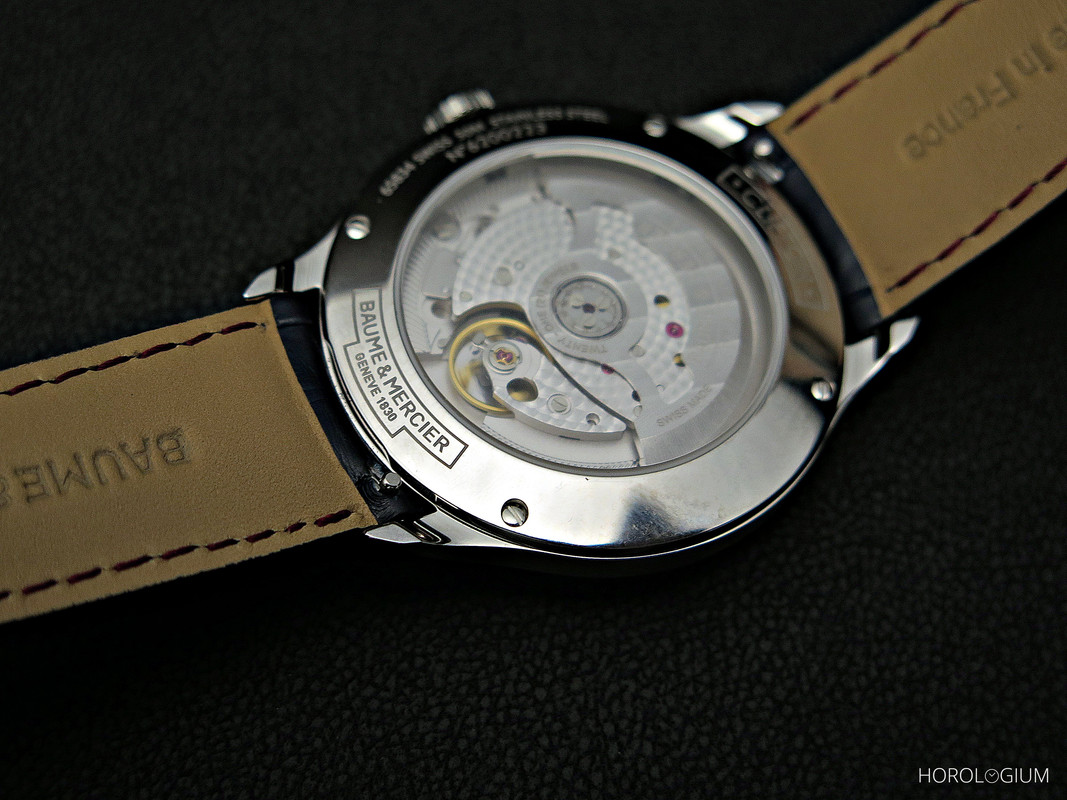 The BM12-1975A is automatic, of course, and beats at 28,800 VPH. There is a reference (MOA 10436), as you can see in the photos, that is a COSC-certified chronometer. The Baumatic movement has a silicon balance-spring, silicon hairspring, anchor, and escape wheel. You can also see the five day power reserve referred to on the dial. This was something that was highlighted in the launch video in terms of where they seem to want to target this watch.

Another aspect that Baume & Mercier noted at the Baumatic launch was servicing. They state that this new Baumatic movement requires servicing less often than their other watches (the latter, they stated, should be serviced every five years). They put this down to an unidentified form of new lubricant used in the movement.

All this resides in a stainless steel case measuring a many-wrist-size-friendly 40mm, with a thickness of 10.3mm. The bezel is polished and the lugs and band of the case have a mix of polishing finishes. 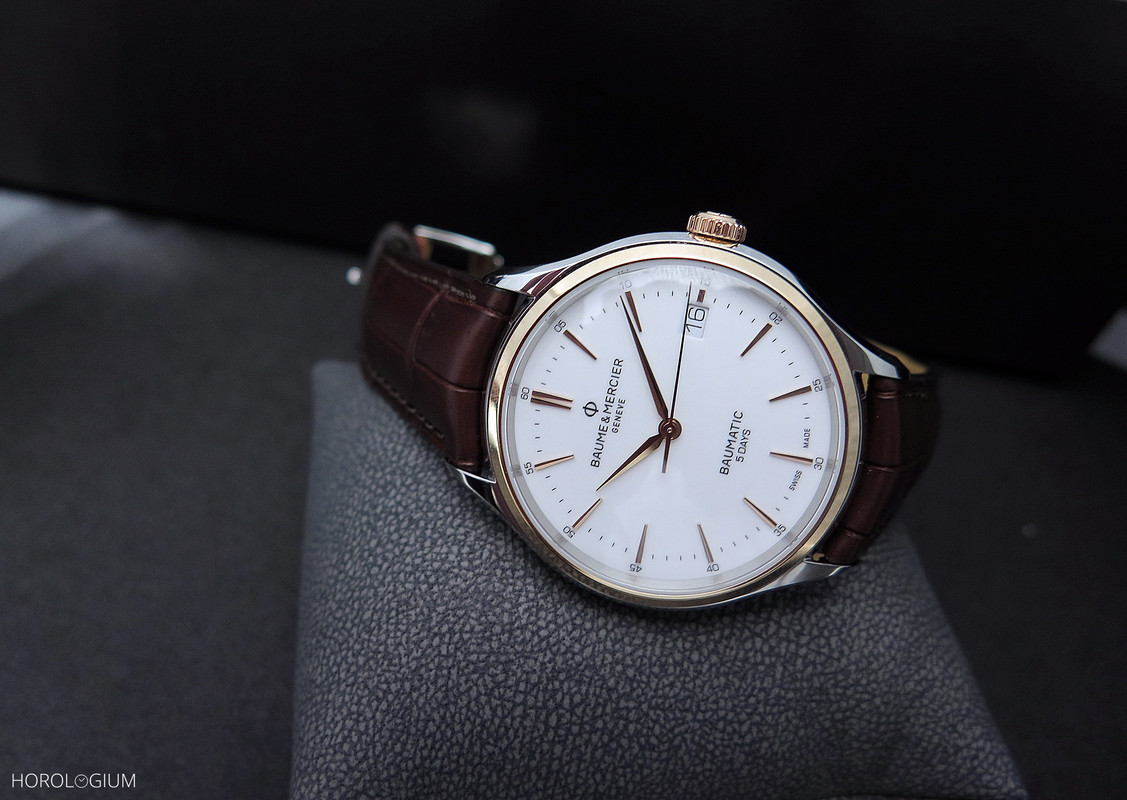 It’s not just the case that is very Clifton, but the dial’s traditionalism also marks it as such. The white dial variant is intended to be porcelain-like, and as you can see, they are getting this shine effect. Atop it are faceted and applied indices and lancet hands, as well as a slender sweep seconds hand. The indices are applied. More than one person has commented on the dial of the latter being almost Geophysic-like. I’ll admit to not seeing this at first, given the rather hectic circumstances under which we saw it, but in thinking about it more carefully subsequently, and in looking back at my photos, I do concede that there is an inkling of that mid-century type of look.

I think it’s easy for those who show above average interest in watches to always be looking for something new, but it’s easy to forget that actually, the vast majority of people who wear watches only have the one watch, and most often than not, they are looking for something traditional and classically styled. The Baumatic collection is exactly that, with the addition of caring a bit about the movement as well.

The new Baumatic does have an unexpected nod to modern desires when it comes to the alligator strap. In fact, this was a mini theme during the SIHH 2018 – ease of strap changing and various strap changing ‘systems’ released by the brands. Baume & Mercier was one of these brands, with the new Baumatic straps being able to changed without the necessity for any tools. 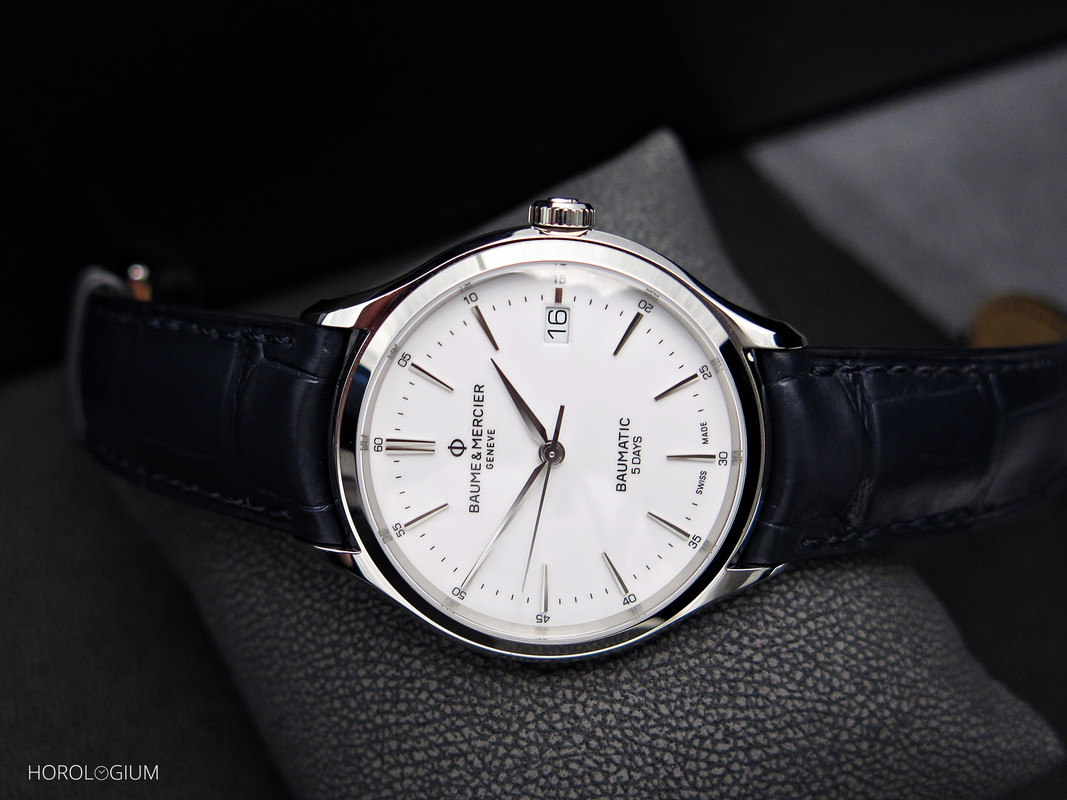 All the Baumatics come with a two year warranty. The COSC certification doesn’t come by default with the watch, but it can be given to you on request.