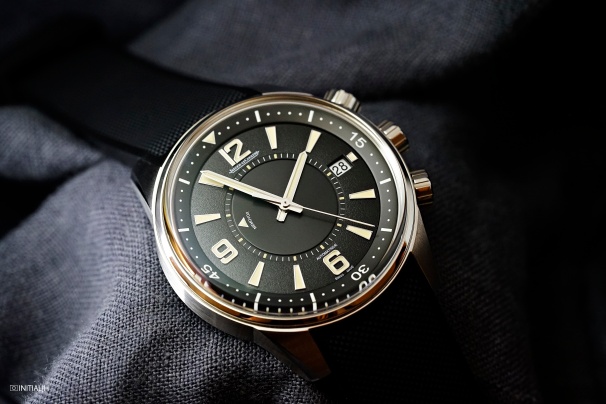 A year ago, at the SIHH 2017, Jaeger-LeCoultre unveiled the new Master Control collection. As I noted at the time, it was a well received new suite of watches at the fair, seen as examples of clean and elegant designs that updated the old Master Control pieces but somehow managed to make them both more contemporary and with some small almost vintage nods, through the use of features such as sector dials.

So a year later, at the SIHH 2018, Jaeger-LeCoultre decided to mark the 50th year since the original Memovox Polaris by introducing five new Polaris models, from a simple time only up to a world timer. Perhaps from another brand, this arguably very similar strategy, of using an existing idea, tweaking it a bit, and then coming up with a number of models to satisfy a variety of customers, might not be able to pulled off, but based on the comments we heard both during and in these days after the fair, Jaeger-LeCoultre have managed to pull it off, particularly with the limited edition Memovox Polaris, the key piece from this new collection. These, being Polaris-inspired, are more sporty than the Master Control collection of last year, but one attribute they do share in common is that they are intended to be ‘daily wearer’ pieces.

Let’s look at each model. 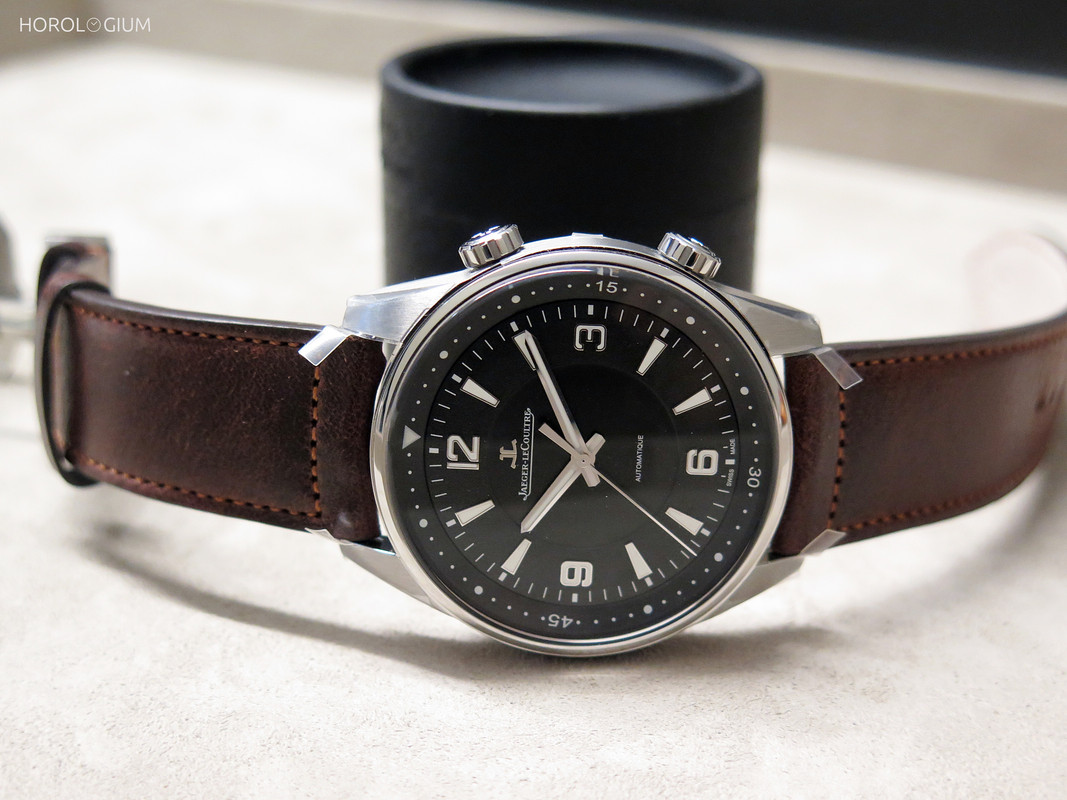 First up, the Polaris Automatic. Coming in two dial versions, black or blue, these are the entry level pieces, featuring the familiar dual crown design – one for time-setting and the other for operating the inner rotating bezel. Both coloured dials have three different types of finishing on the dial – sunray, grained, and opaline, but it is more noticeable in the blue dial version. Both dials, as all 2018 Polaris dials, are filled with Super-LumiNova. 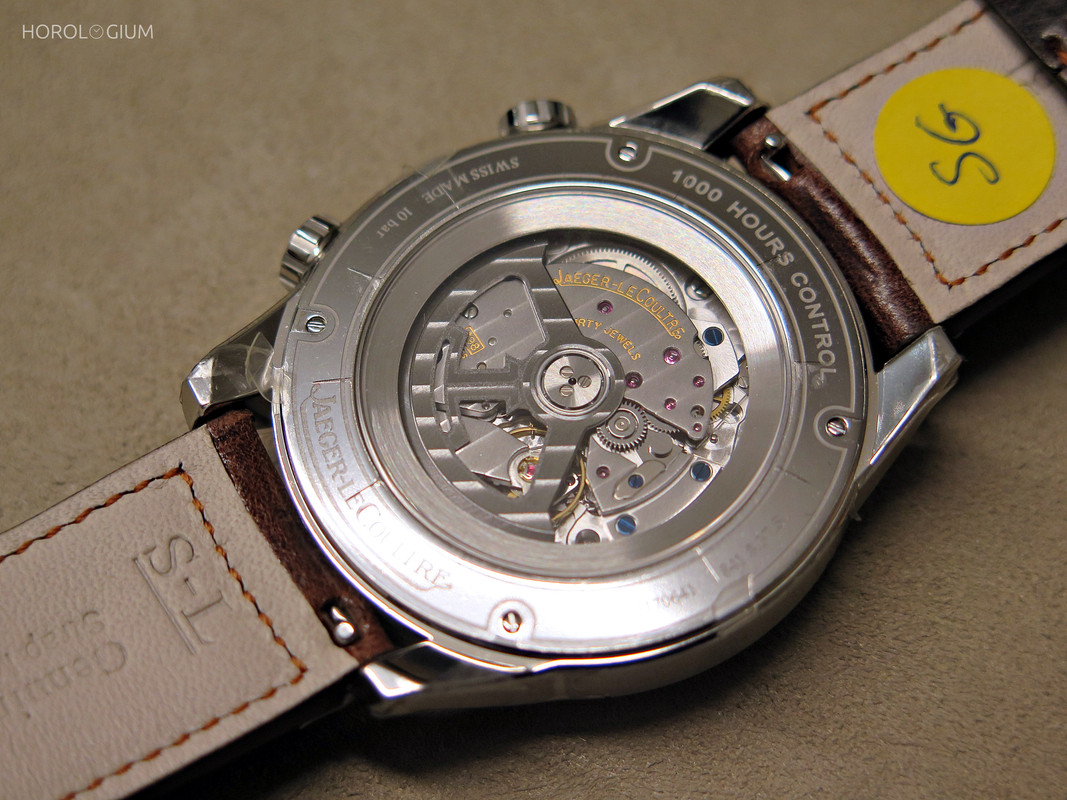 The case itself is 41mm, stainless steel, with a water resistance of 100m. Inside is the Jaeger-LeCoultre Calibre 898/1, with a power reserve of forty hours. 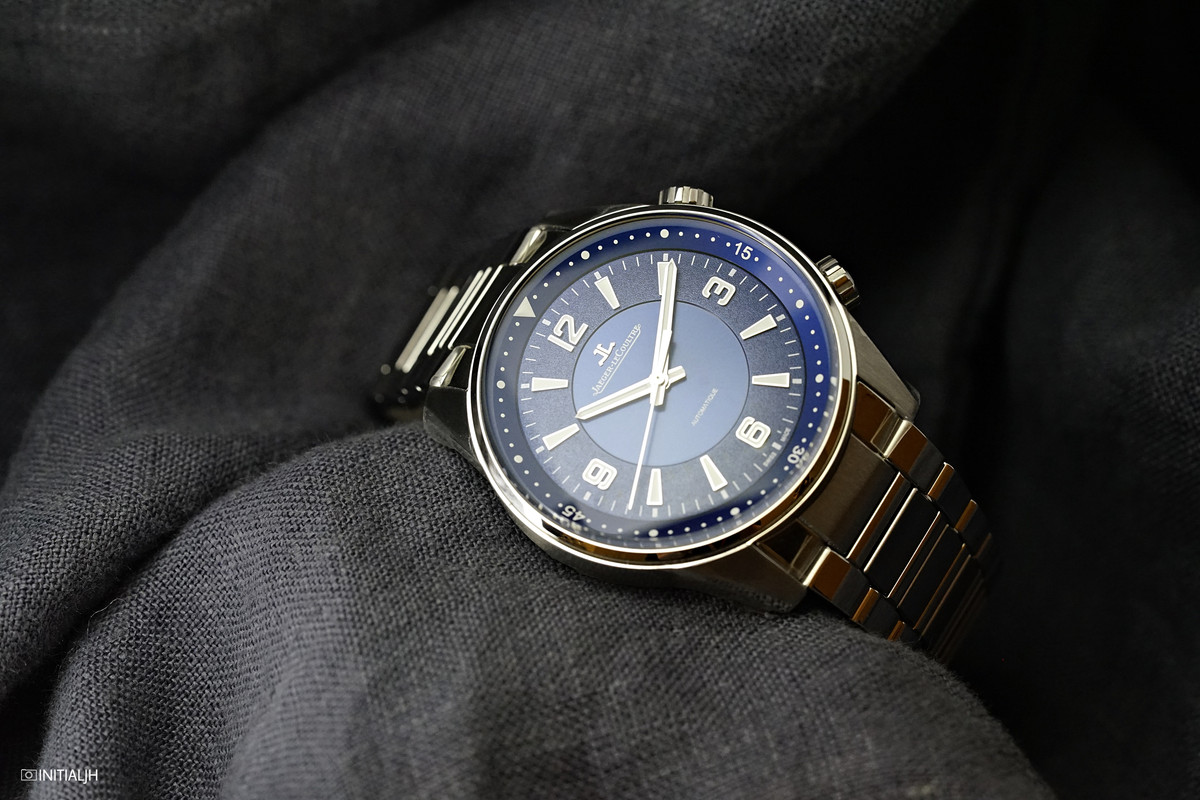 If you liked the look of the original Polaris and are happy sans date, then this will probably tick your boxes. This model is also available on a stainless steel bracelet, but to be honest, it looks better on a strap (the choices are alligator or calf) and to my mind at least, seems to make more sense on a strap. If you do like the bracelet, it has a combination of polished and brushed finishing. 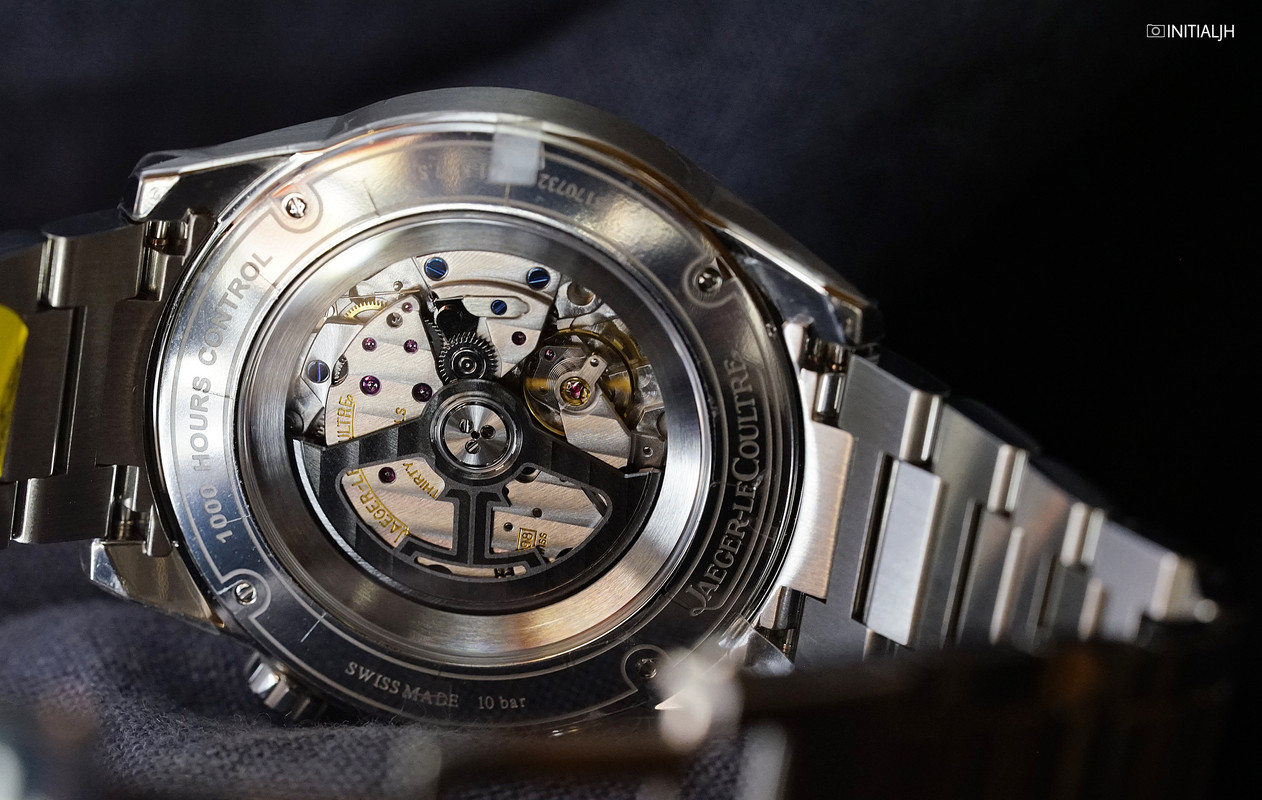 Next up is the Polaris Chronograph, which comes in both stainless steel and rose gold, but in a 42mm case with a water resistance of 100m. The dials of the stainless steel models are either black or what they are calling ‘ocean blue’, again with three types of finishing – sunray, grained, and opaline. 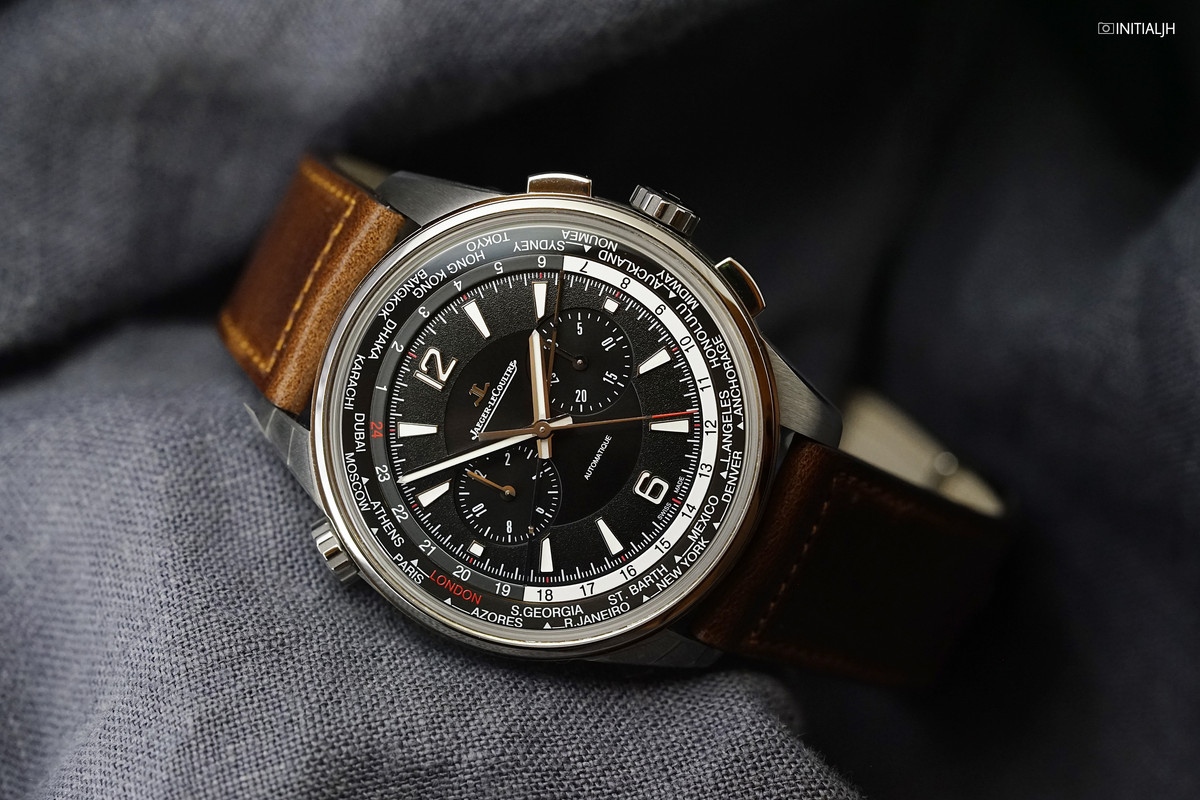 A chronograph is perhaps the second most popular ‘complication’ after a date function, so with both a dressy and non dressy alternative available, this will probably prove popular. This type of chronograph ‘look’ is a classic one, but also slightly different for Jaeger-LeCoultre, chronograph wise.

Inside is the Jaeger-LeCoultre Calibre 751, with a power reserve of sixty-five hours. 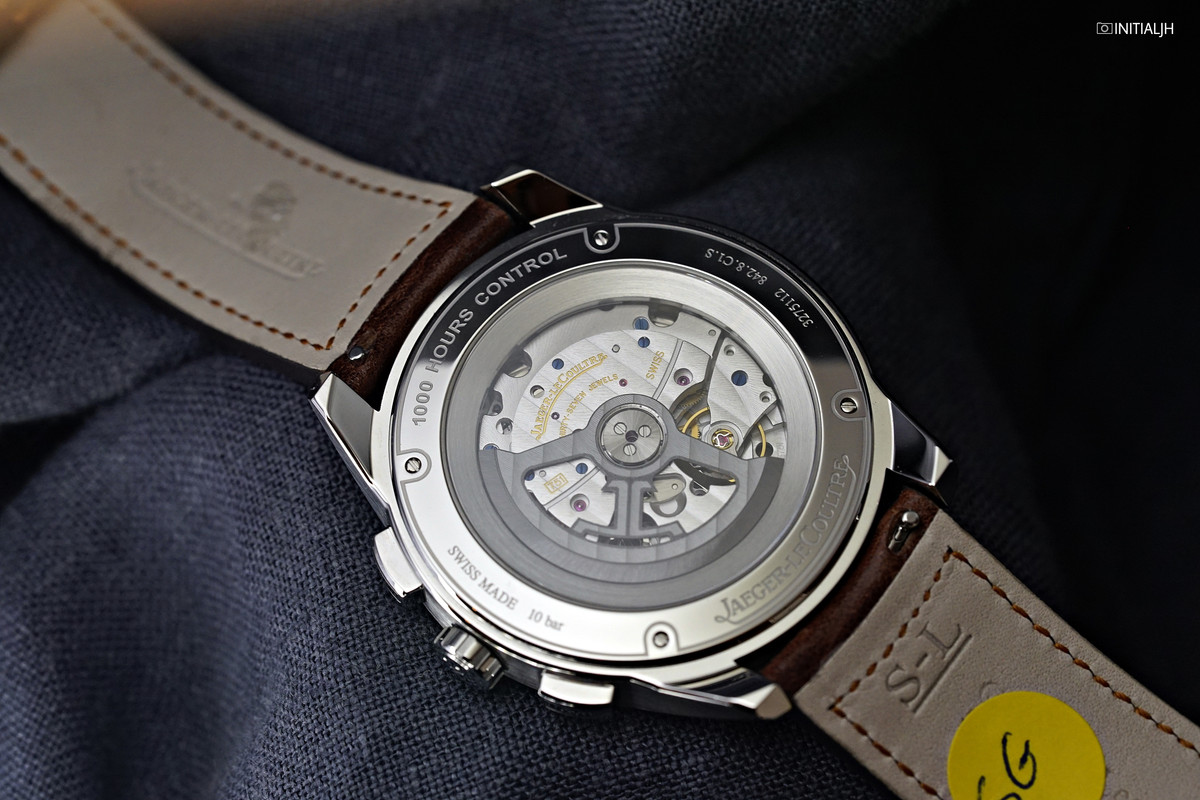 The rose gold model is the only precious metal model in the new Polaris collection, and its dial is anthracite coloured. The case metal carries through to the movement, with has an oscillating weight in rose gold. 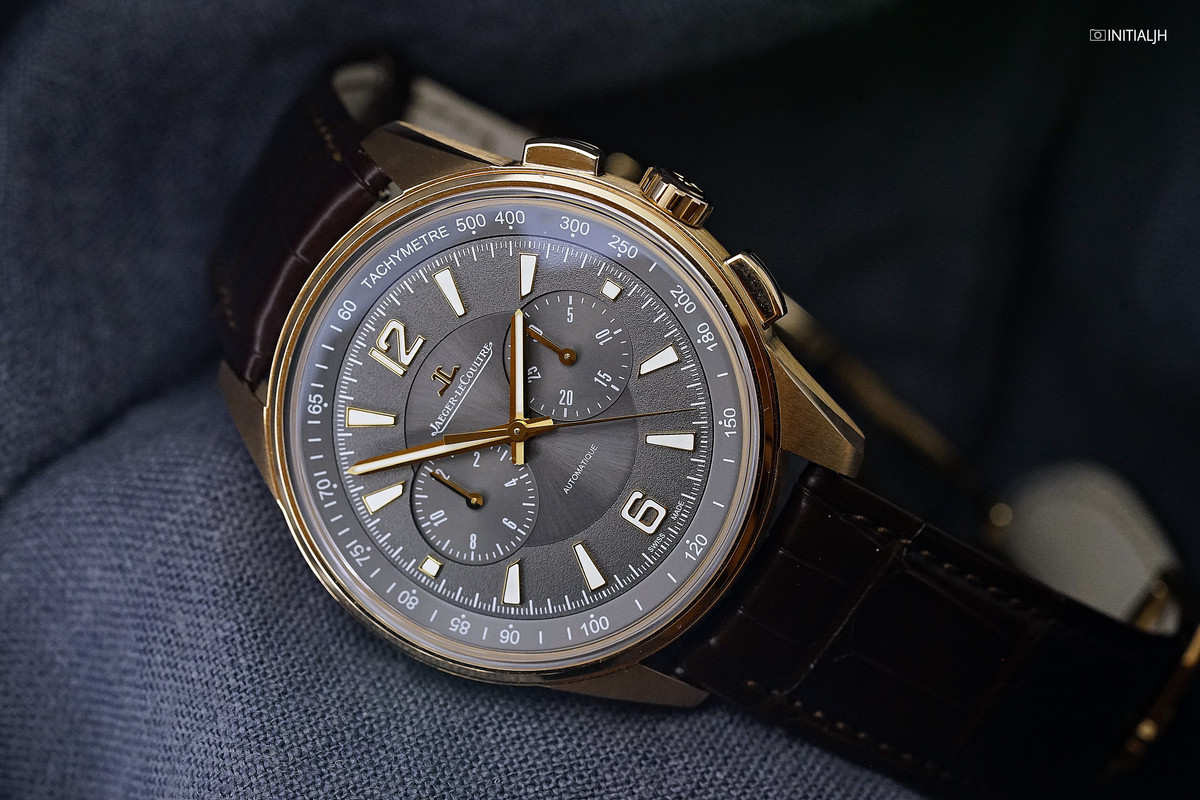 The most complicated of the new Polaris models is the Chronograph World Time. It is as the name states, combining both a chronograph function and a world time function, the latter adjusted via a crown at 10 o’clock. All you need to do is set this disc to the city you are in, and you can immediately see the time in 23 other cities around the world.

Because of the added information on the dial, Jaeger-LeCoultre have made this 44mm, to make it more easily read. The case is also in another material – titanium. 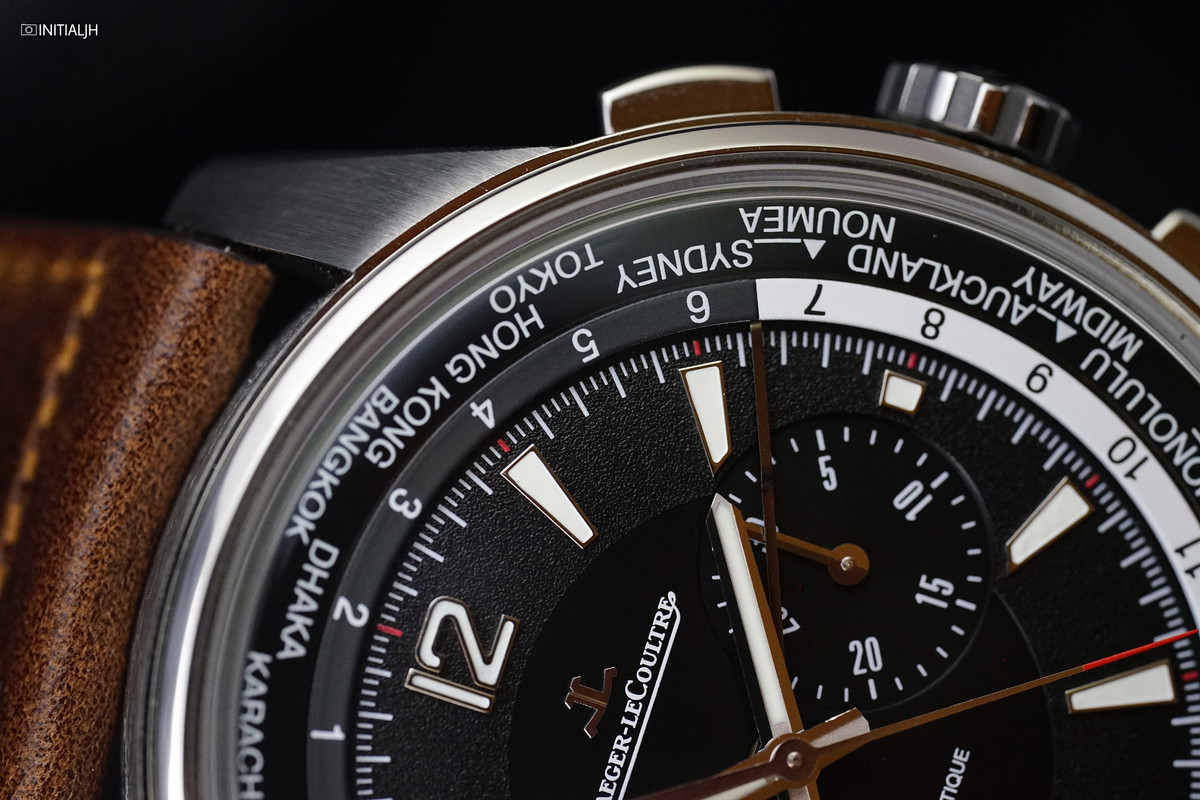 Inside is the Jaeger-LeCoultre Calibre 752, with a power reserve of sixty-five hours. The dial, again, comes in either black or ‘ocean blue’, with sunray, grained, and opaline finishing. Water resistance is still 100m for the case. 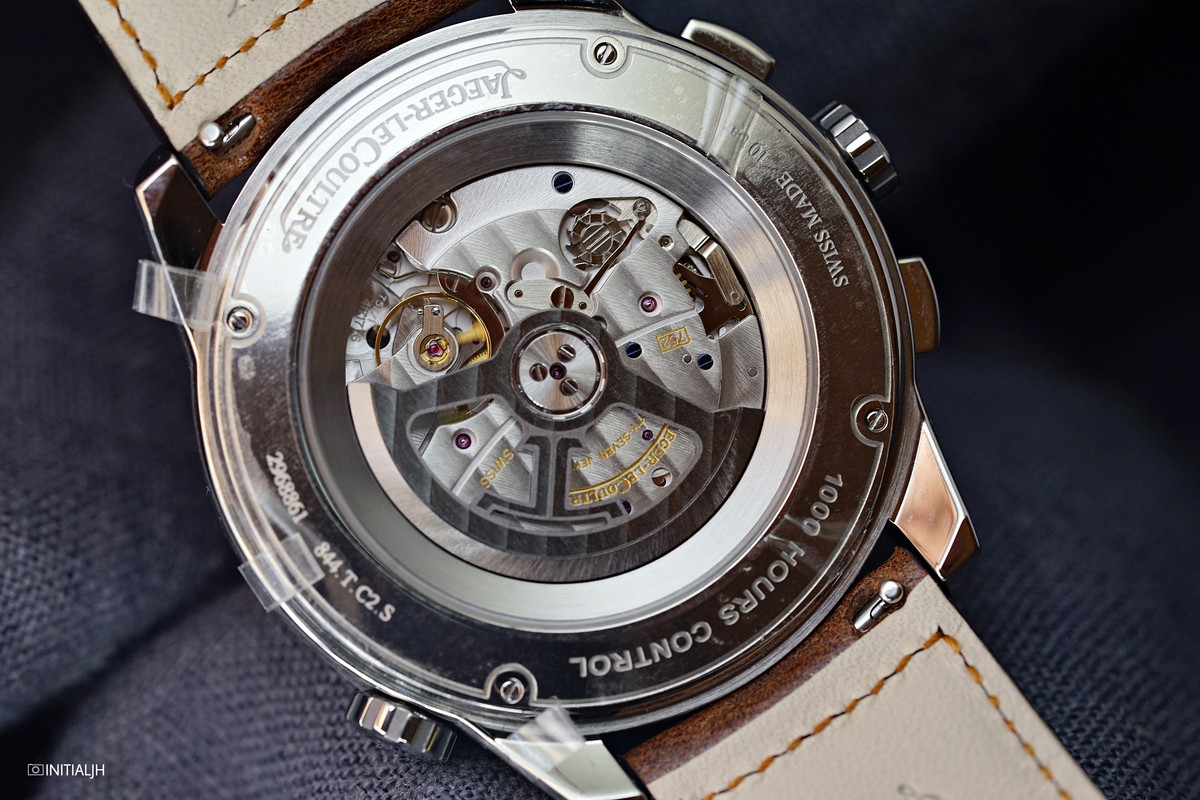 The Polaris Date is getting closer to the design of the 1968 original on which this collection is founded, with a triangle along with trapezoidal indices, Arabic numbers for 6, 9 and 12, and a railway track for minutes, along with a date at three o’clock. We didn’t get a decent photo of it, so this is a stock photo; it is only available with a black dial and the same sunray, grained and opaline finishing. It is, if you like the 50 year old Polaris sans alarm.

Inside is the automatic Jaeger-LeCoultre Calibre 899/1, with a power reserve of thirty-eight hours.

The case is 42mm of stainless steel, and it is water resistant to 200m. The case back is solid, with the same scuba diver engraving decoration as above.

There is again a strap choice for this a good looking new rubber strap, or the new steel bracelet.

This leads us naturally to the most talked-about piece, the limited edition 2018 Polaris Memovox. 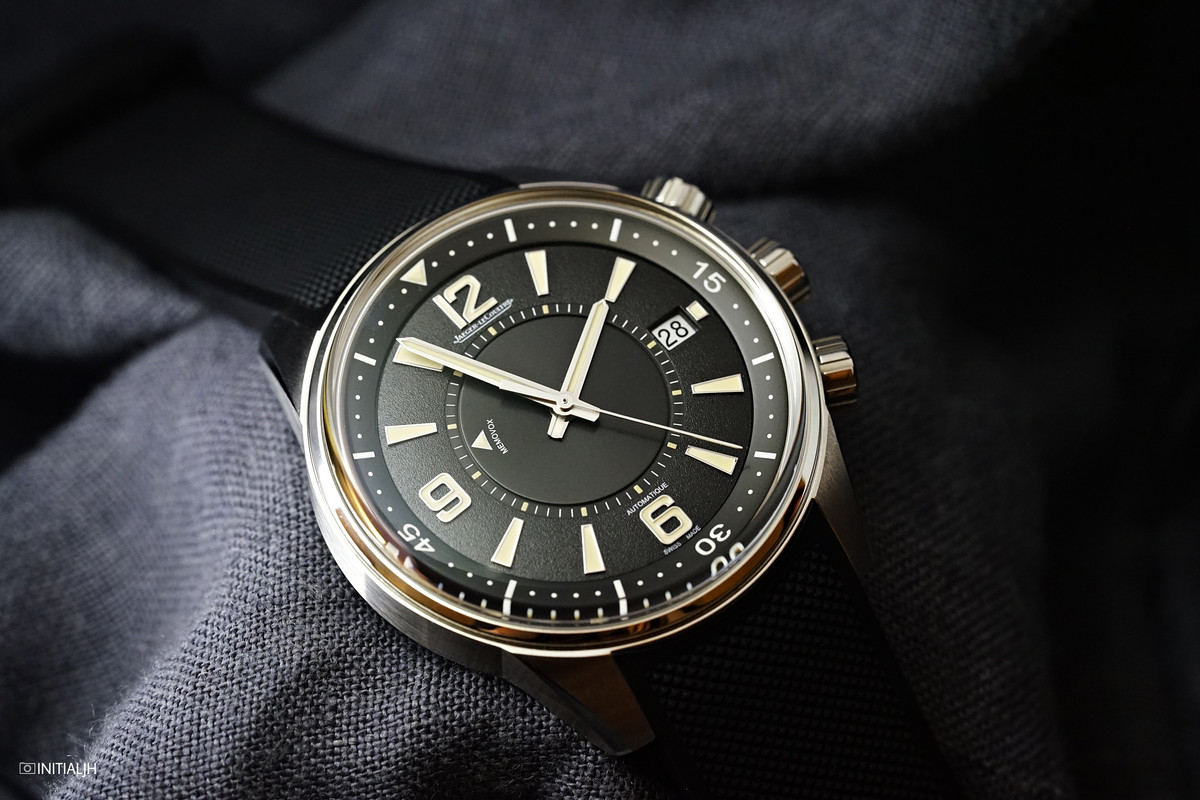 Showing the same design codes as the original on which it is based, including the triangle, trapezoidal indices, Arabic numbers, a minute railway track, there is the use of faux vintage Super-LumiNova to give it that added ‘vintage’ nod.

There are of course the three crowns on this Polaris Memovox : one for setting/ correcting the time, one to operate the inner-bezel, and one to set the alarm. The case back is closed and features the commemorative Scuba diver engraving, along with a general designation as to is limitation (one of one thousand). 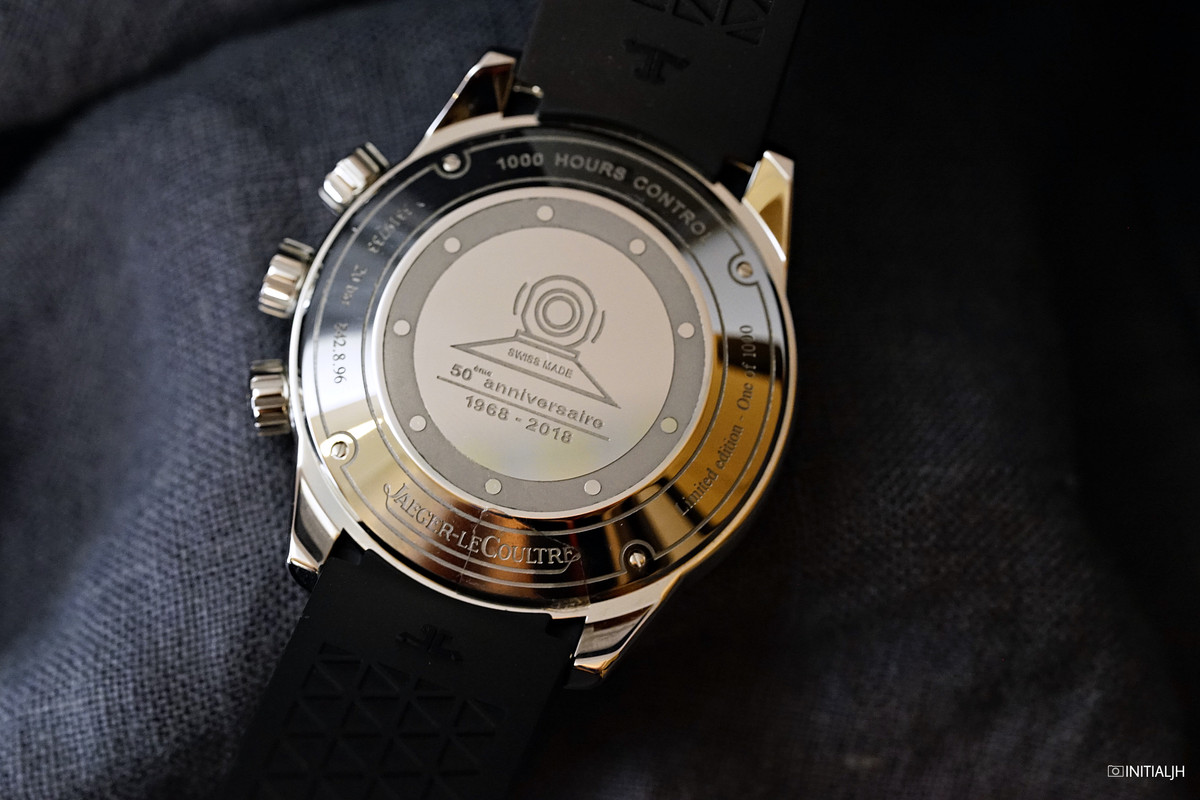 Inside is the Calibre 956 with forty-four hours of power reserve and featuring a striking mechanism with a gong, along with the centre seconds and instantaneous date change.

The 42mm stainless steel case comes on the new rubber strap and is water resistant to 200m. 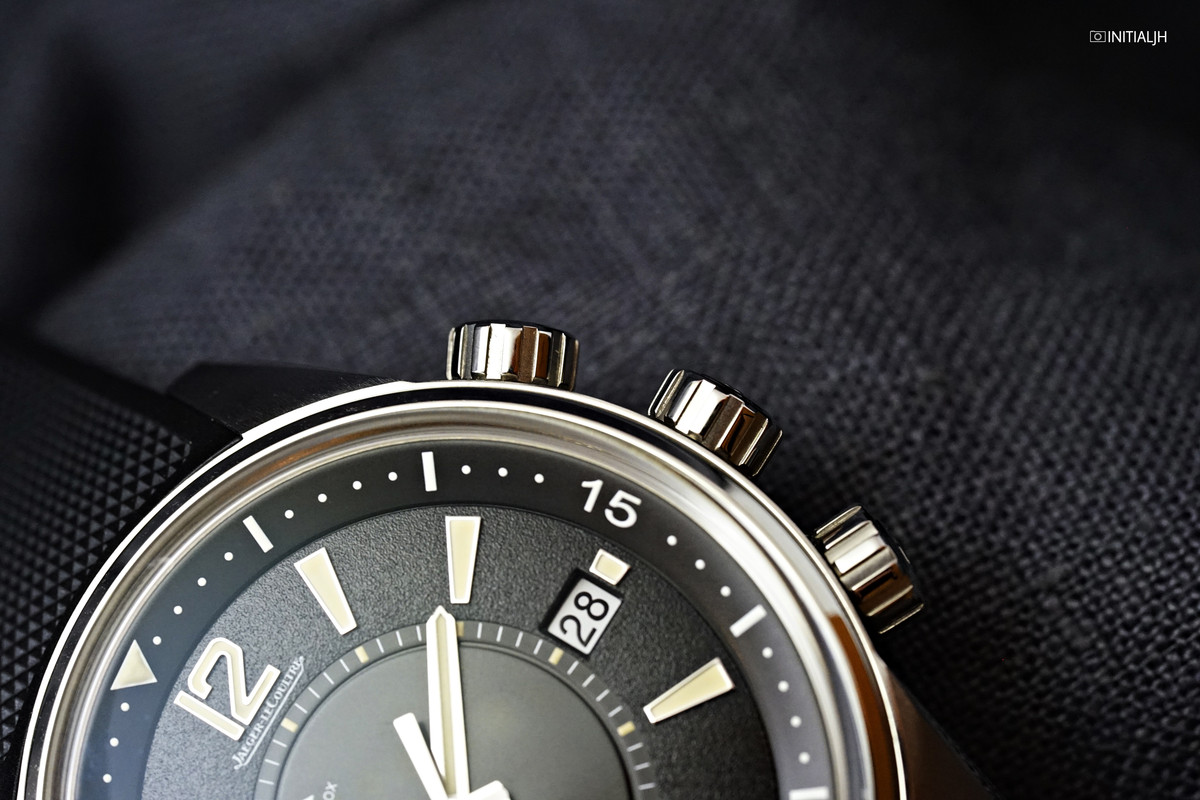 These two most recent homages to the Polaris were very difficult to get at the time, and perhaps finally acknowledging the enduring significance of the original Polaris to the history of Jaeger-LeCoultre, they have decided to launch this new limited edition as a part of a clever appeal both to admirers of the original and to those who are discovering it for the first time via some clean looking sports watches with a clear Jaeger-LeCoultre aesthetic that can still be borderline dressy.

As mentioned at the beginning, these are designed as watches that can be worn every day, in the same manner as the Master Control Collection update was, but for those looking for something more sporty than the Master Controls. This new Polaris collection, which no doubt will form the basis of more models in the future, slots smartly and comfortably into the existing Jaeger-LeCoultre collection families. It seems to tick all the boxes of legibility, functionality, a clear aesthetic that has a nod to the brand’s past, and really, is probably destined to do well. 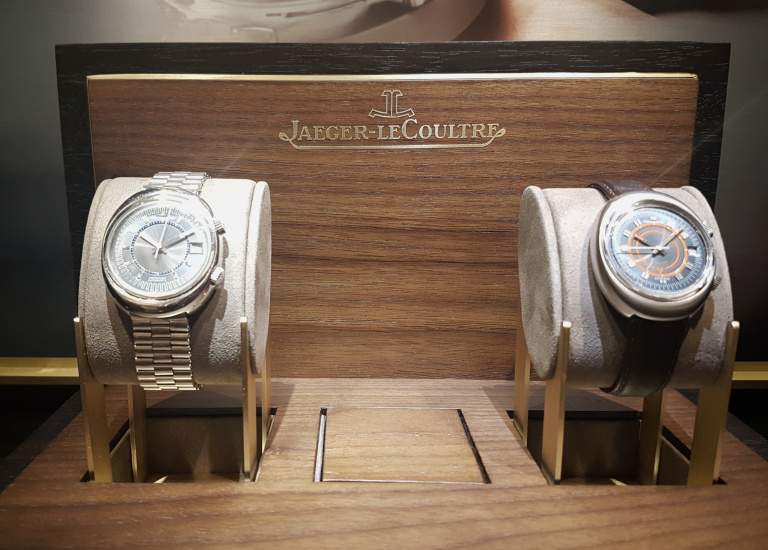 As some of you may know, I actually own a blue Polaris, but it is quite a different beast from this new blue one. Mine is an example of the Polaris II, aka the E870, which was released between 1970 – 1972 in grey, blue and red variants, and contains the Calibre 916. The second generation of the Polaris, only 1120 pieces were ever made, in grey, burgundy or blue dials. It is a chunky 1970s watch, not the sort of Polaris that I can see Jaeger-LeCoultre releasing an homage to anytime soon, but it was nice to see the presence of the more ‘forgotten’ elements of the Polaris past represented in the Jaeger-LeCoultre SIHH 2018 booth.