Recently, Breguet Australia held an unusual function in Sydney entitled ‘Explorateurs Espions’, a preview of a travelling exhibition currently at the S.A. Maritime Museum (other states and territories to follow) called “The Art of Science – Baudin’s Voyagers 1800-1804”. Funded by Napoleon Bonaparte, Nicolas Baudin’s ships Géographe and Naturaliste left Le Havre in October 1800 to map the coast of New Holland. The Géographe was captained by Baudin and Naturaliste, by Jacques Hamelin.

Accompanying them were nine zoologists and botanists. The exhibition brings over 340 original paintings and drawings by expedition artists Charles Alexandre Lesueur and Nicolas-Martin Petit during the voyage, on loan from the Museum of Natural History in Le Havre. It also includes other items on loan, including Baudin’s chronometer, hand drawn maps, and Baudin’s journal from France’s National Archives.

The horological centrepiece of the evening with Breguet was a visitor from the Breguet Museum at Place Vendôme in Paris, the No.3196 marine chronometer, but amongst the selection of current collection timepieces that were on display alongside the prints was, aptly, the Ref. 5717 Hora Mundi with the Asia and Oceania dial. This is not a new model, but not having had the opportunity to photograph this since Horologium’s birth, it seemed too good a chance to let go by. Plus it’s always nice to see watches featuring Australia on them.

At first glance there is no mistaking that this is a Breguet from the Classique collection, but with a highly decorated dial that has a flourish of whimsy on the cloud of the day/ night indicator. 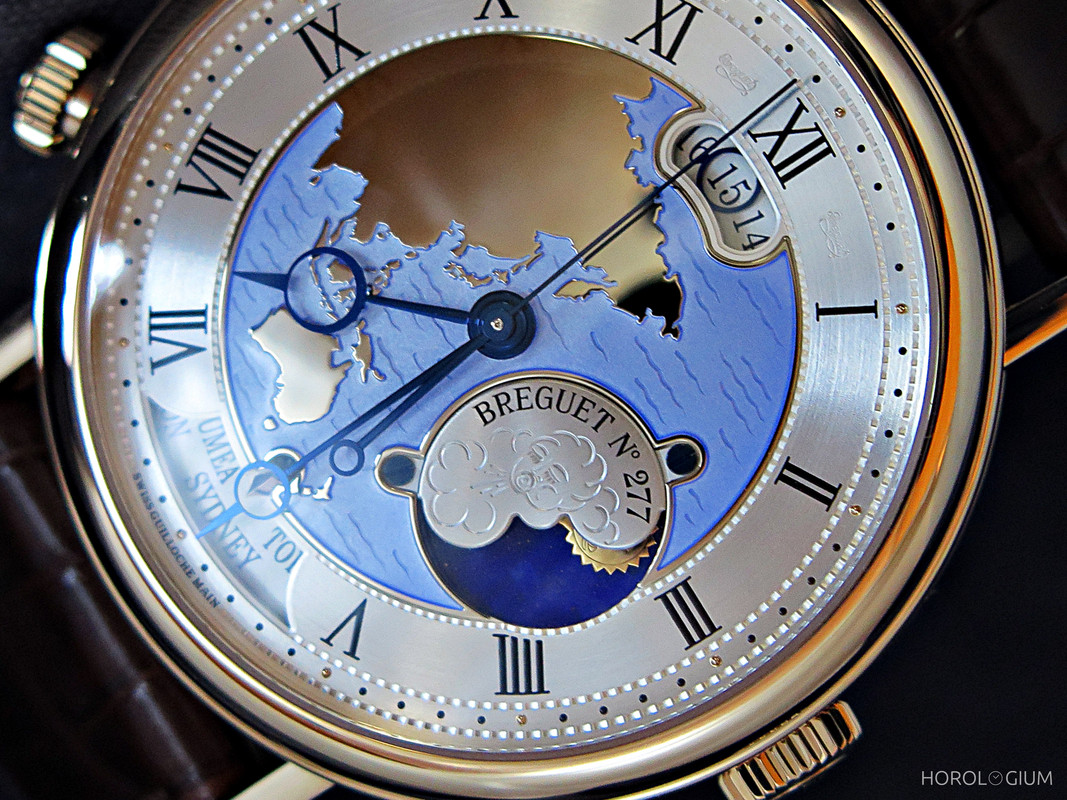 The classic looks of the Ref. 5717 almost hide the fact that when it was released, it was done so with four patents, and as the world’s first mechanical watch with instantaneous on-demand jumping time zones, the cities of the twenty-four time zones visible on a disc indicator at 6 o’clock. The event being held in Sydney, it was set as such on the night.

As well as the key city window there is a ‘dragging’ date display at 12 o’clock and as mentioned, a day/ night indicator at 4 o’clock for which they’ve hand-engraved the silvered gold cloud ‘cover’ in playful manner. The background of the indication itself is lapis lazuli, with the sun and moon both gold (yellow for the sun and rhodium-plated yellow gold for the moon) and the stars, pyrite. 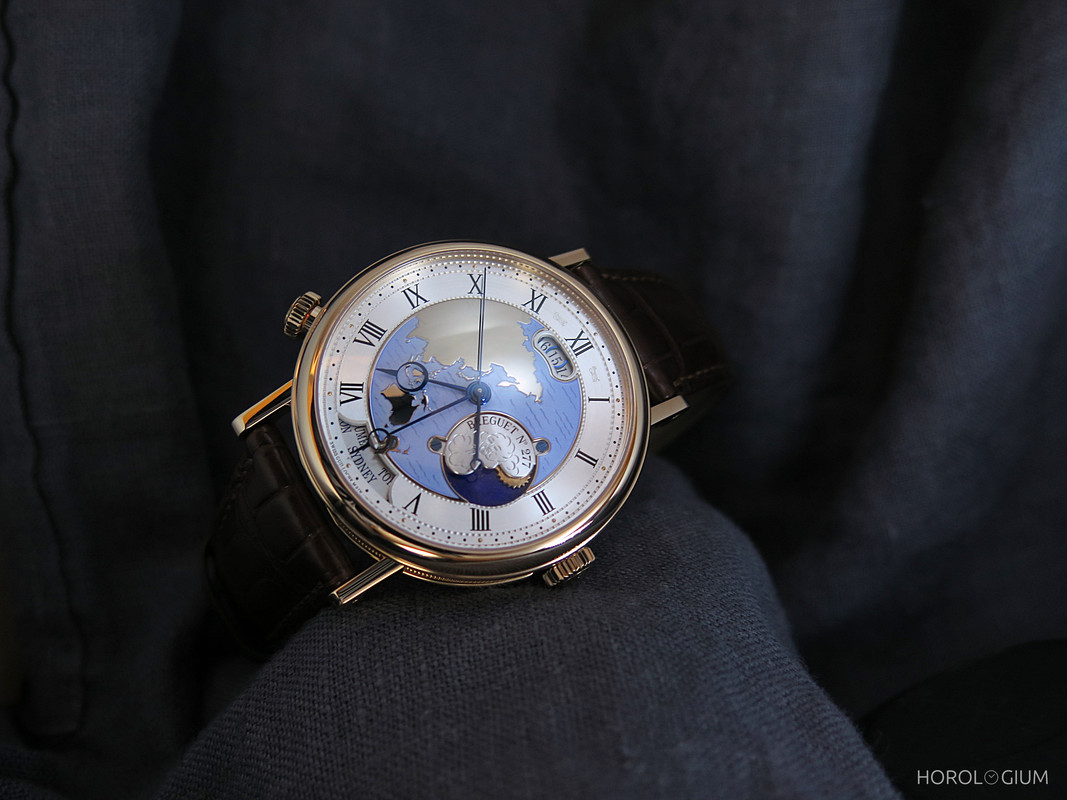 Functionally, as well as the time, central seconds and twenty-four city time zone indicator, it has a two time zone capability, with a mechanical ‘memory’ that keeps track of time in two different time zones. Once the initial setting of the watch is complete, the time zones can be alternated back and forth via the pusher at 8 o’clock.

The dial is solid gold, with stamping and engraving work. The oceans are lacquer work and the highly polished continent is basically a mirror, which makes for tricky watch photography.

Inside is the automatic Calibre 77F0, which is their Calibre 777 with a module. Its oscillating weight is hand-engraved and it has a power reserve of fifty-five hours. 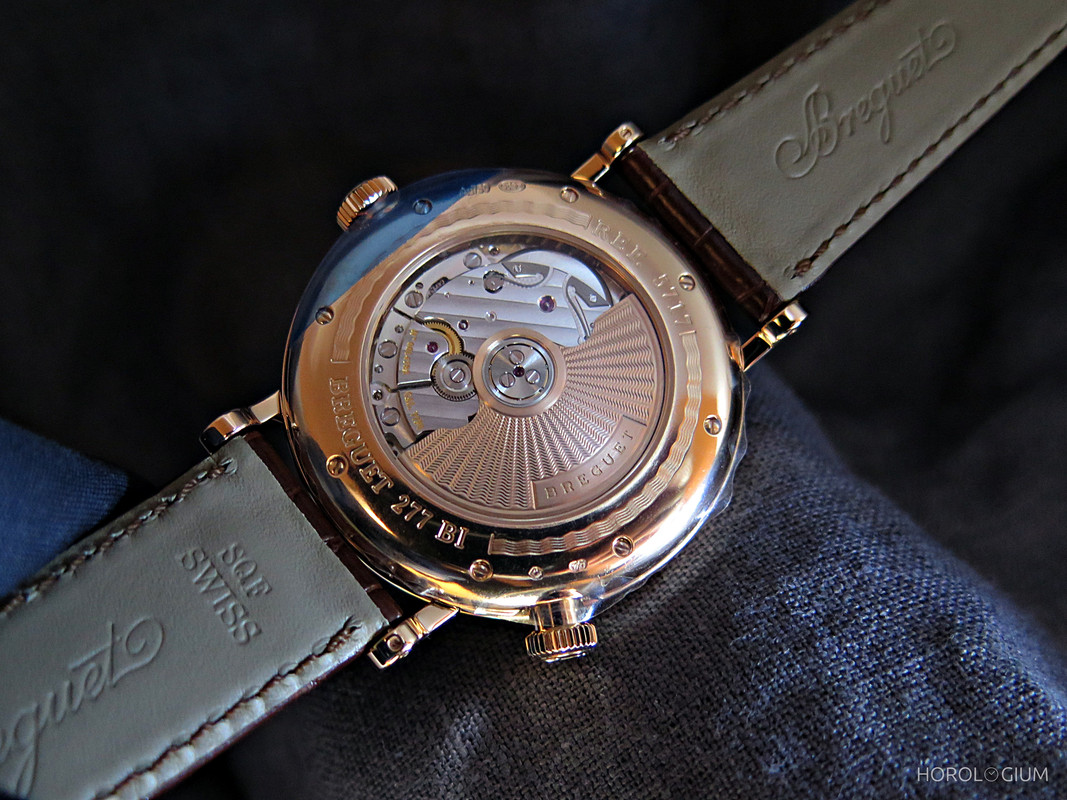 Sized at a healthy 43mm with a thickness of 13.55mm, as well as this Asia/ Oceania version it also comes with dials showing the Americas and Europe/ Africa. The Ref. 5717 is available in both platinum and rose gold models. Go to Breguet’s website at this link to see all the variants. 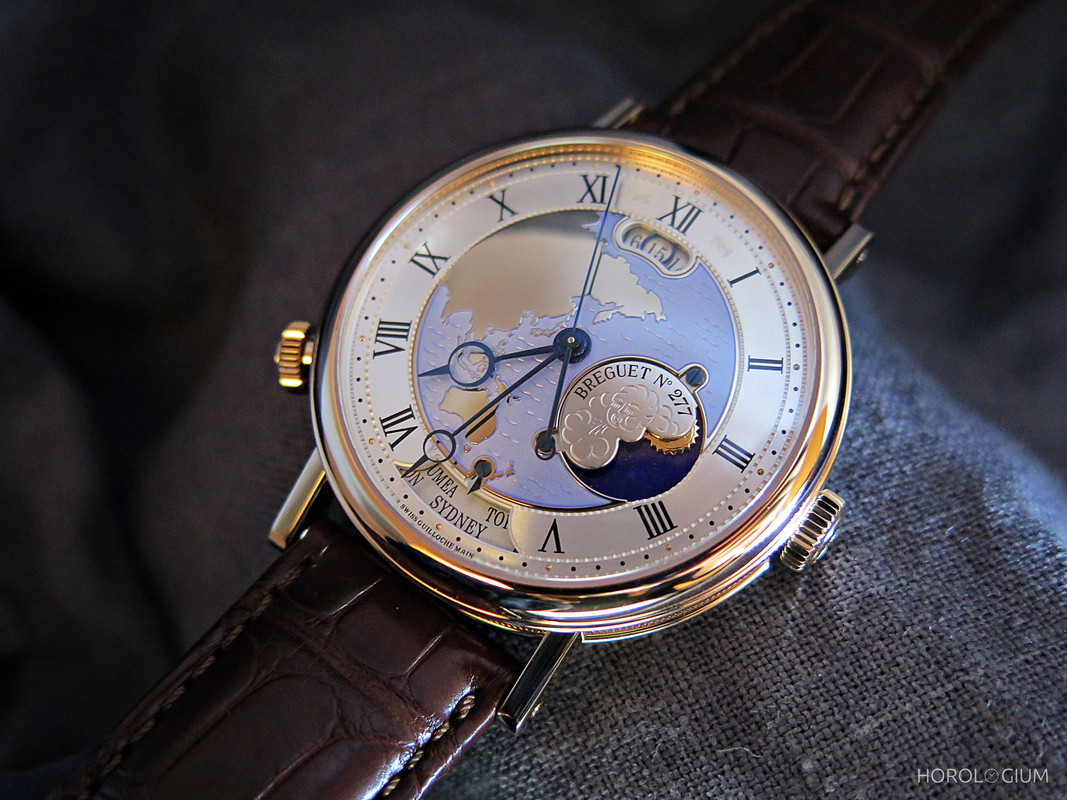 For details on the Baudin exhibition, including where it will be held during its nationwide tour, go to this link and scroll down. For those in Sydney it will not be at the Australian National Maritime Museum until August 2017. For details click here.