MB&F HMX : the most affordable MB&F (yet) 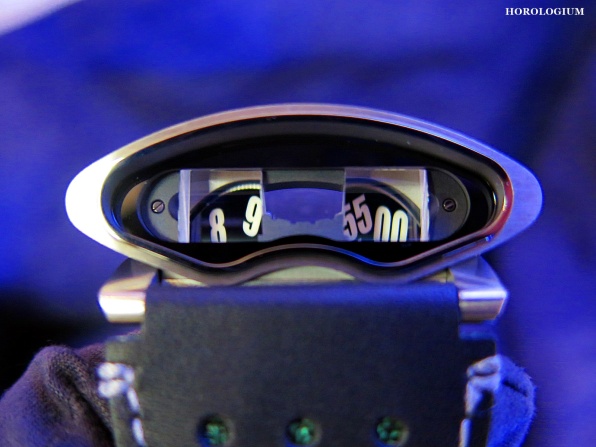 A while back MB&F told us that one of their 10th anniversary watches would be their most price-accessible watch to date. This alone was enough to have many waiting patiently to find out not just the price, but also of manner and form this would take.

It turned out to be the HMX (‘X’ for ‘ten’, naturally) and perhaps less predictably, a variant of the HM5, so for those familiar with that watch, this green one, at their Australian AD The Hour Glass, is a more price and size accessible ‘version’. In some ways it is a ‘version’, but it feels like very much its own timepiece when seen ‘in the metal’.

The body is stainless steel and Grade 5 titanium, with two sapphire crystal prisms reflecting and magnifying the bi-directional jumping hours and trailing minutes which are in the familiar vertical display so you can just angle your wrist to read the time.

The time display works thus – it is a projection of the two rotating discs on top of the movement. The numerals on the discs are reflected 90° and magnified by two sapphire crystal optical prisms that project’ the time onto the front vertical display.

Also visible through the sapphire crystal are supercar-inspired covers featuring funtional chrome oil filler caps that are unscrewed to oil the jewel bearings for the indicator discs. Bonus aesthetic feature. 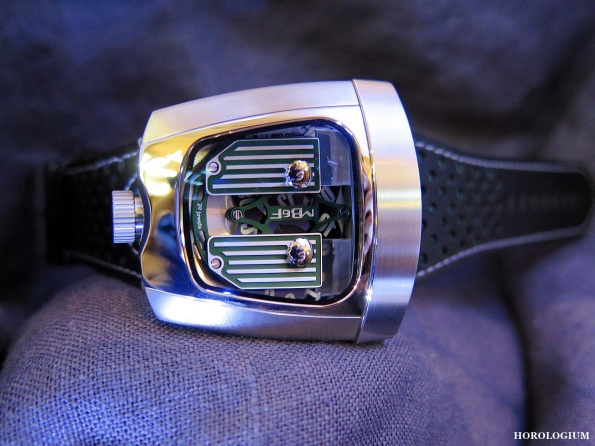 This use of stainless steel (versus the full Ti of the HM5) is one of the ways in which MB&F have managed to make this cost so much less than its elder relation. Another significant reason is that it has a Sellita movement as its base, versus the Girard-Perregaux base of the HM5.

Aesthetically they are undoubtedly related but as well as being smaller (apparently the size of the HM5 was a point of concern to many), it is curvier and looks less ‘solid’, for want of a better way of putting it; there is more on display.

The four colours that have been released in limitations of 20 pieces have been, in keeping with the exotic/ supercar-inspired theme, are Lotus Black, Ferrari Red, Bugatti Blue and British Racing Green. The price is CHF 31’400 (including VAT) and for Australia, go to MB&F’s authorised dealer The Hour Glass for all enquiries.