To have handled one Greubel Forsey GMT is special enough, but following on from having seen the white gold model earlier this year in London, I recently had the opportunity to see the new-for-2013 red gold model to ‘complete the set’, as it were.

The red gold one featured in this post is, in fact, here in Sydney. There are Greubel Forsey owners and connoisseurs in Australia, so for those who do not know, there is in fact an authorised dealer here – J.Farren-Price, at which I’d previously met Stephen Forsey, and who have this watch exclusively in Australia.

Having the chance to see the same watch in both metals, albeit with a number of months in-between, has meant the opportunity for comparison.

With this one, as in the case of the white gold, the watch is very much more striking ‘in the metal’ than it is in photos. The official photos that came out on its release are representative of the reality of the GMT, but they do not convey the depth of the rotating globe and how much the eye is drawn to it. The globe’s protrusion, the watch’s most distinctive feature, is one of those things that may divide people depending on whether their preferences are for ‘flatter’ dials or whether they like a piece such as this with a variety of levels. 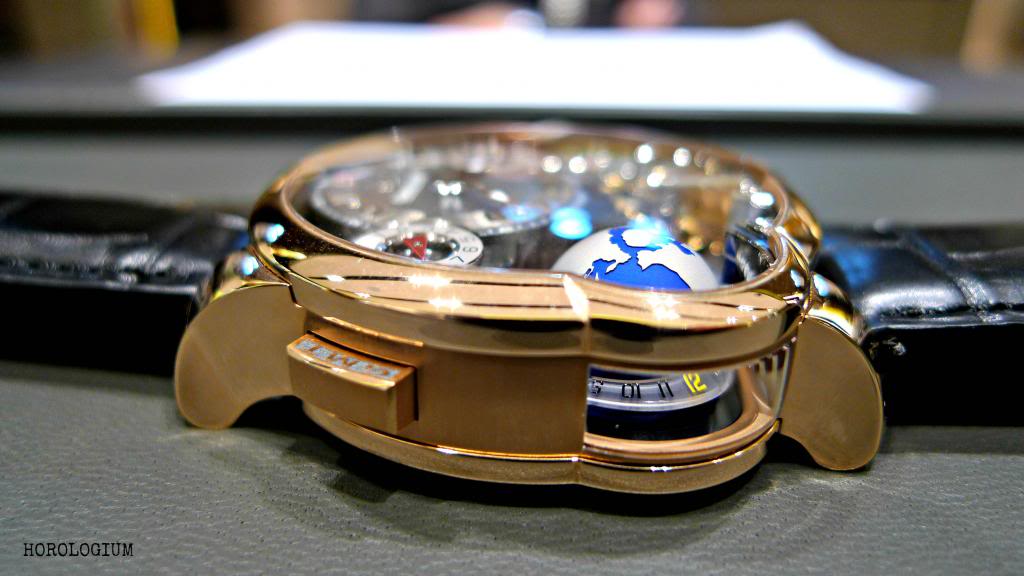 Both GMTs have an asymmetrical convex synthetic sapphire crystal and case back of the same through which you can see the hand-wound Greubel Forsey Calibre GF05 with 72 hour power reserve and patented tourbillon. The movement is 9.80mm thick and has 443 parts. The tourbillon has 87 parts inclined at a 25 degree angle, and 24-second rotation. The tourbillon cage for both red gold and white gold models have titanium cage bridges and a gold counterweight. 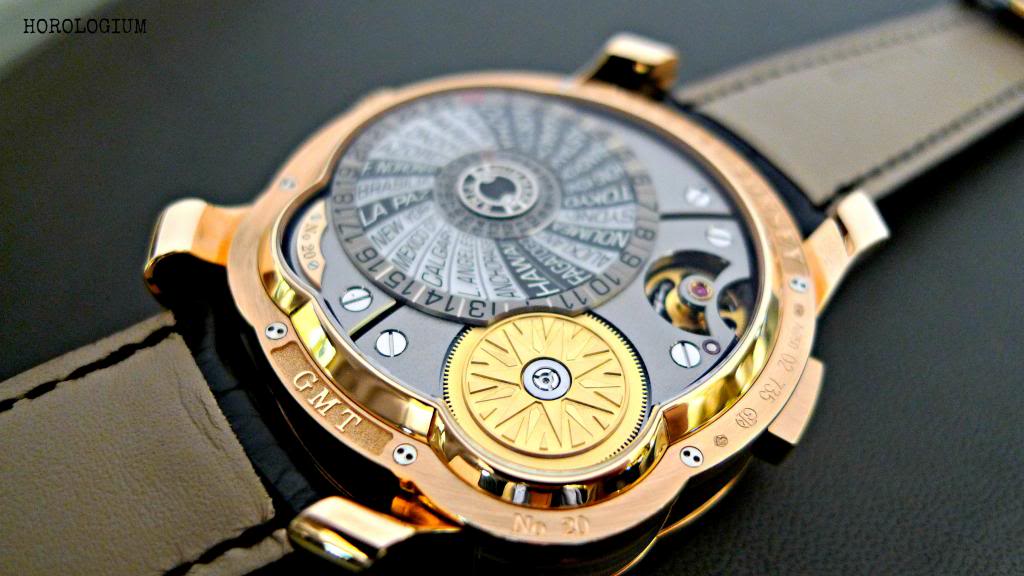 Functionally, the GMT has a second time zone indicator at 10 o’clock and a 24 time zone world time display. The rotating globe is titanium with a Universal Time display. There is also a summer time indicator and day/ night indicator. The dominant hour and minute dial is in frosted gold with anthracite treatment. The hour-ring is also white gold, the hour and minute hands in polished gold with Super-Luminova. Similarly, the smaller sub dials are in gold, as is the GMT indicator, but the small seconds and power-reserve hands are in blued-steel. The second time zone indicator is a red triangle, to the top left of the dial.

The movement remains unchanged from the white gold model, as does the rotating globe in royal blue oxidised titanium at 7 o’clock, tourbillon 24 Seconds at 5 o’clock, second time zone indicator at 11 o’clock, small seconds at 2 o’clock, power reserve at 3 o’clock and world time disc on the case back.

In terms of differences, the white gold model has main plates of nickel silver, frosted and spotted with polished bevelling and countersinks, straight-grained flanks, nickel-palladium treatment. The red gold version has anthracite treatment instead of nickel-palladium. This difference also extends to the bridges.

Although of a decent thickness (16.14mm) for obvious reasons (movement, globe), the case is what nowadays constitutes almost middle-of-the-range, at 43.50mm. Nonetheless, because of its thickness, it does sit fairly prominently on the wrist.

Turning over the GMT reveals the a ‘worldtime’ disc bearing the names of 24 cities. Aligning the relevant city with the local hour on the outer chapter ring – or inner ring for cities with summer time – sets the dial-side globe in the correct position. 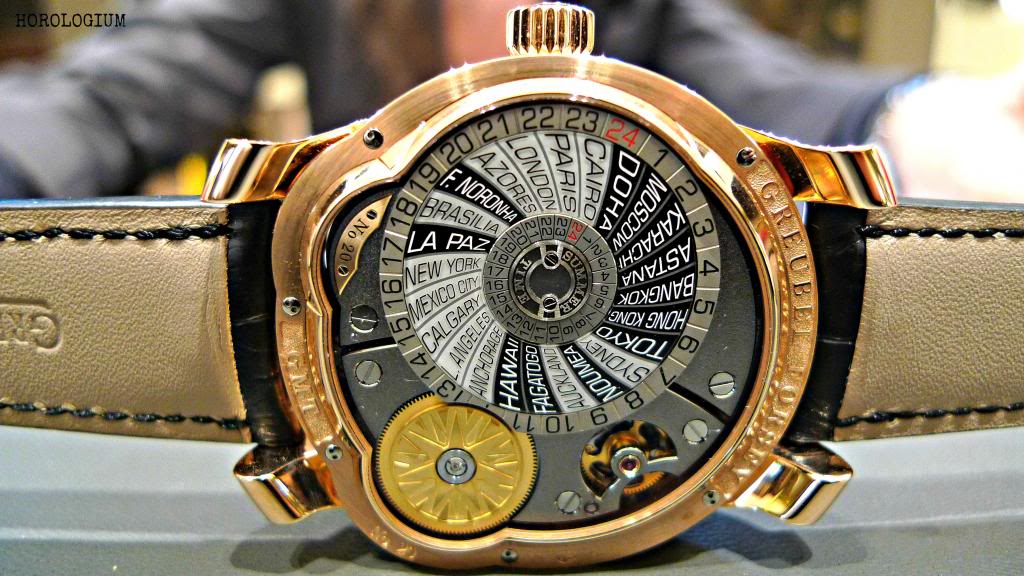 Whether you prefer the white or red gold models is, in the end, a purely personal preference. The finishing on both is as high as one expects from a Greubel Forsey, and to see and appreciate this properly you really need a loupe. 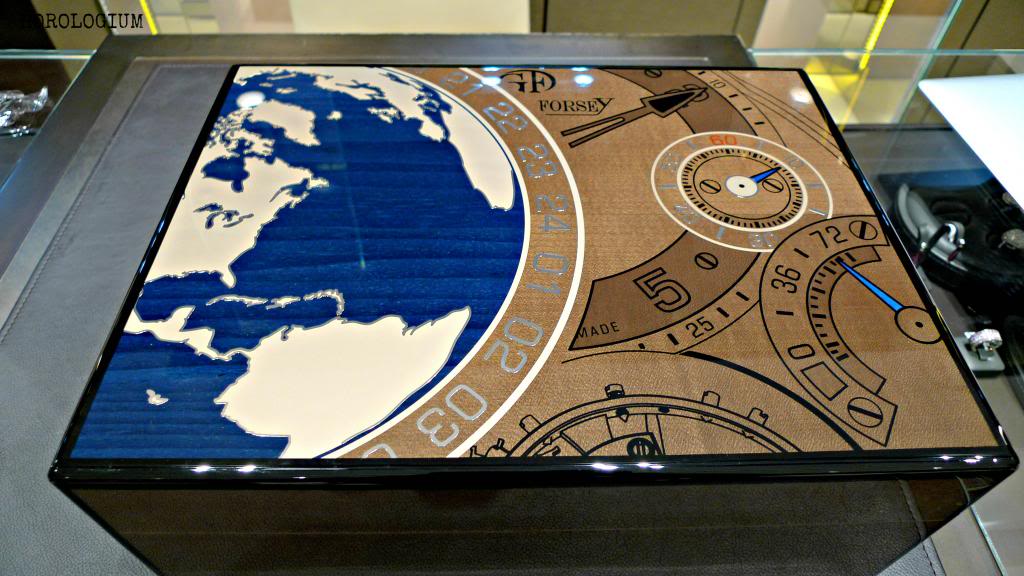 A watch that is every bit as striking ‘in the metal’ as it is in photos, Greubel Forsey’s GMT is a piece with a big presence that also comes in a suitably impressive box with beautifully skilled and detailed inlay work. 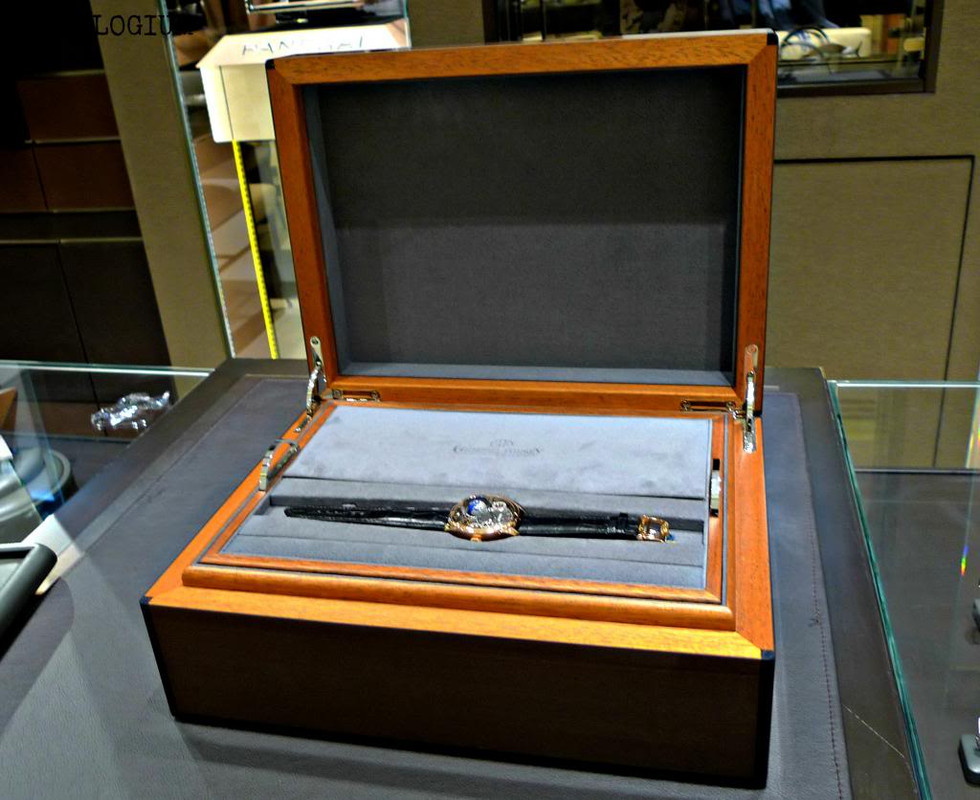 The top layer onto which the watch is placed is in face a removable tray, below which are a travel case, a loupe, and more than ample room for anything else you wish to put there. 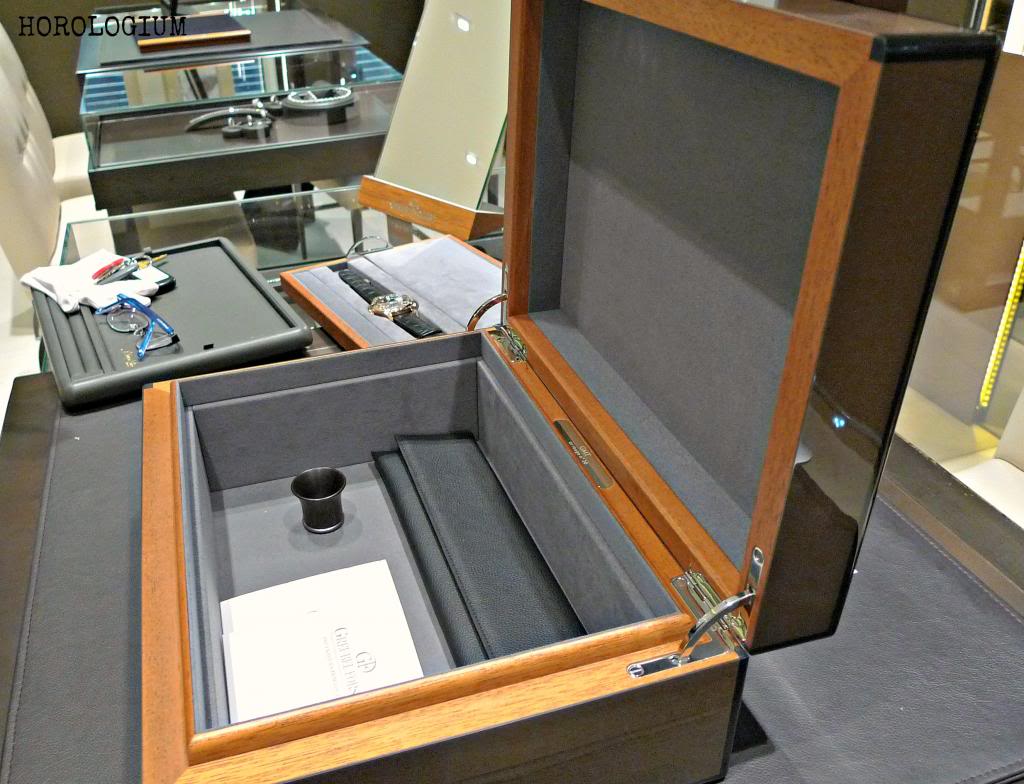 If you are in Australia (and especially for those in Sydney) and have never seen a Greubel Forsey ‘in the metal’, or are interested in this scarce watch then you now know where to go. The finishing on this brand really has to be seen up close to be appreciated, and of all the models in Greubel Forsey’s current collection, this is my standout favourite.