When is a pocket watch not a pocket watch? When even its creators don’t use the term but call it “a grand über complication”. Oh, and there’s also when the ‘pocket’ watch can’t actually fit into a pocket.

We are speaking of Urwerk of course, and the UR-1001 Zeit Device, a time ‘device’ which covers a timekeeping expanse from a second to a thousand years.

As Felix Baumgartner and Martin Frei put it – “With Zeit Device we could allow ourselves carte blanche and created a larger playground for our imaginations… and then filled it with all of our complications and indications.” 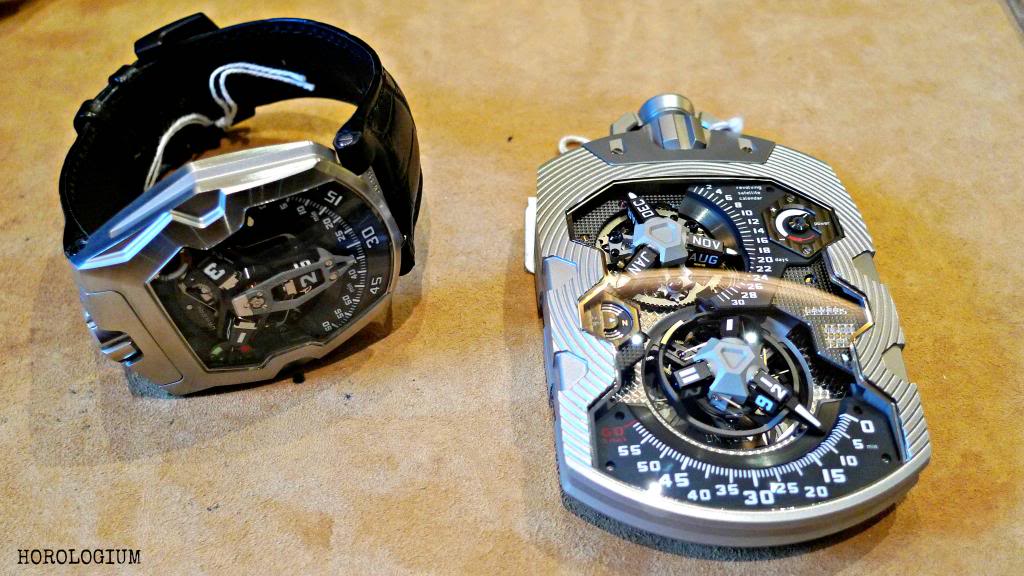 The first thing you’ll notice when picking up this pocket watch is its weight and size. It measures a rather mindboggling 106mm x 62mm x 23mm and you can see, in the comparative photo above, exactly why it is more ‘device’ and less ‘pocket watch’.

The second thing you’ll notice is that it has all the hallmarks of an Urwerk piece, especially the use of satellite systems – in this instance, orbiting satellites for hours and day, as well as retrograde hands. In fact the Zeit Device has ten complications : the satellite hours and months, running seconds, retrograde indicator for minutes, indicators for date, day/ night, power reserve (39 hours), ‘oil’ (i.e. service) change (every five years), 100 years and 1000 year. The calendar aspect is what (apart from the size) makes it special compared to the other Urwerk complications. 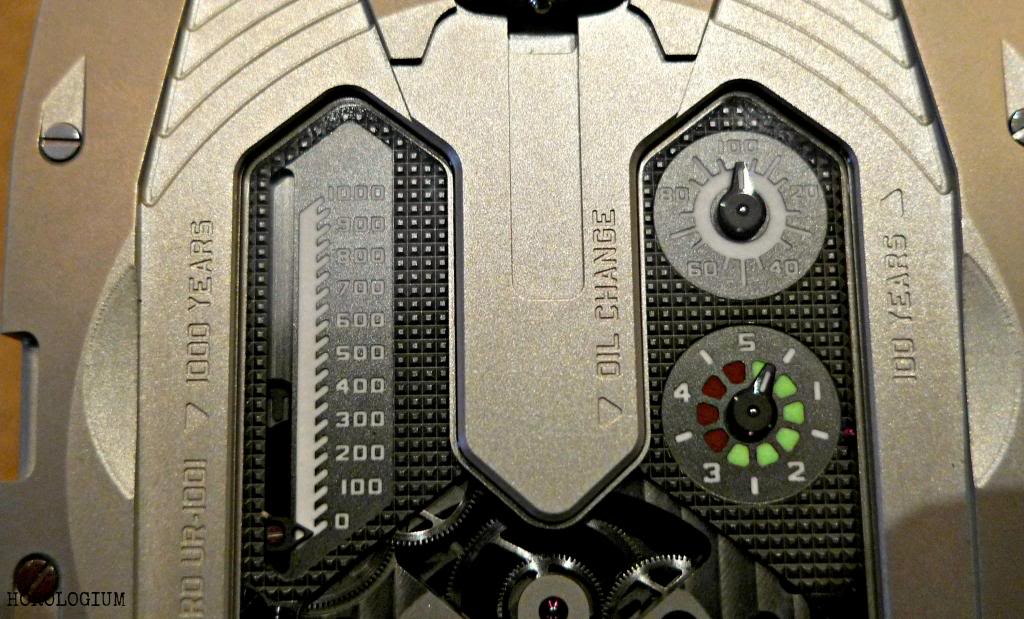 So what is the point of having 100 and 1,000 year indicators other than ‘because you can’? They show how long the pocket watch has been running for, although its service is required a good deal before the first 100 years is up. The 100-year indicator advances in 5 year increments; both it and the 1000-year register the total running time of the movement. When the hand reaches the 100-year mark, the small pointer at the bottom of the linear 1000-year indicator on the left will move an increment.

The method (revolving hands0 for telling the hours and minutes is now used to indicate the month and the date on the linear scale. The revolving satellite calendar is similar to the hour satellite, with months and date replacing hours and minutes.

The hour satellite consists of a rotating central carousel which supports three hour satellites, each of the three with four hours allocated to it on individual sides. Hours and minutes can be set backwards without affecting the calendar function.

The retrograde minute hand is fixed to a ring around the circumference of the satellite. This ring is moved along a guide rail by the hour satellite. When the minute hand gets to the end of the rail at 60 minutes, the star-cams trip over to release the minute hand, which springs back to zero at the start of the scale.

Turning the UR-1001 over and flipping over the protective cover reveals the “Oil Change”, 100-year and 1000-year indicators. The first of these, as mentioned, will tell you when a service is due. During years 1-3 it will be green and from 3-5, red of course. Inside is the Urwerk calibre UR-10.01 manually wound movement. 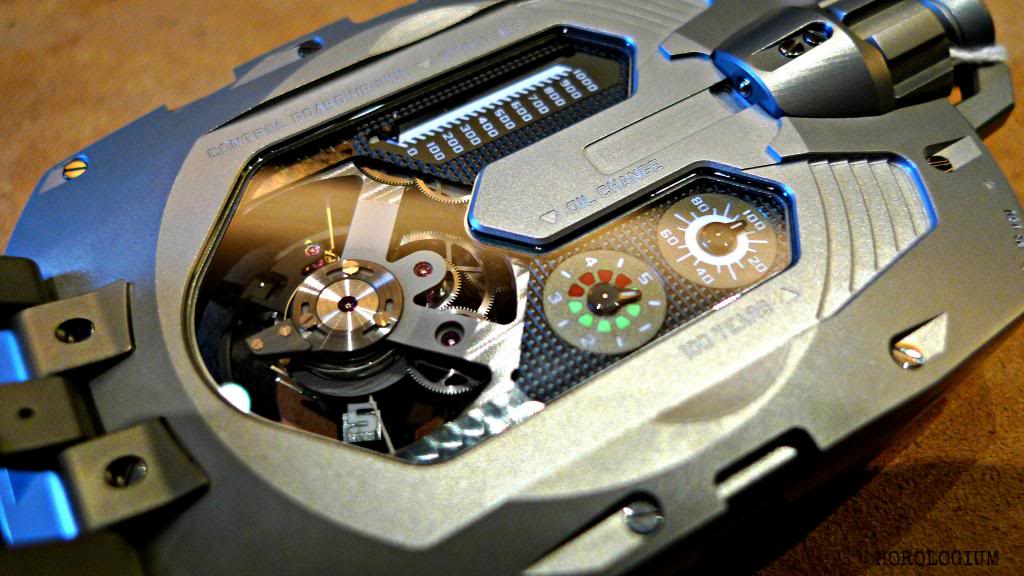 There is Super-LumiNova on the dial’s markers, and a rotating disc day/ night indicator is marked with black Super-LumiNova for night, white brushed-ruthenium for day. Dawn and dusk are a combination of both.

So, how do you operate the Device? There is a three-position winding crown. Position 1 is winding, position 2 is for the month and date, and position three sets hours and minutes.

The combined winder and desk display case of the Zeit Device is in polished solid walnut with buffalo leather lining. Every 10 or 15 minutes – the interval is adjustable according to whether the timepiece requires fast winding or maintaining winding – the Zeit Device is rotated 185° and slowly oscillates to rest, causing a winding rotor to charge the mainspring.

A use of AlTiN steel and titanium case, PE-CVD and DLC treated mainplate, baseplate, dials and satellite complications means that it has a no-nonsense high-end industrial feel to it. With its looks and weight, this is almost like a handy horological weapon; it certainly looks as though it can handle a bit of rough and tumble.

Made in an edition of 8, the Zeit Device is a rare beast to come across. This one was kindly shown to me at Marcus Watches in London, where I also saw this piece. Thanks go to Liam for the opportunity to see a timepiece that I never thought I’d see ‘in the metal’.