Earlier this year when I was in London I visited Marcus Watches, a watchnerd ‘destination’ London boutique on Bond St that carries many brands but in particular, is known for being the supporter of a number of ‘independents’. In the decade of its existence it has grown into a powerhouse and destination for many visiting watch enthusiasts.

I had visited them on my last trip to London a couple of years ago but this time I had Liam as my host. He not only took me on a tour of the boutique but very graciously showed me more watches than I could absorb in one sitting, including some rare pieces. This post is about the first watch I saw, the Greubel Forsey GMT in white gold. 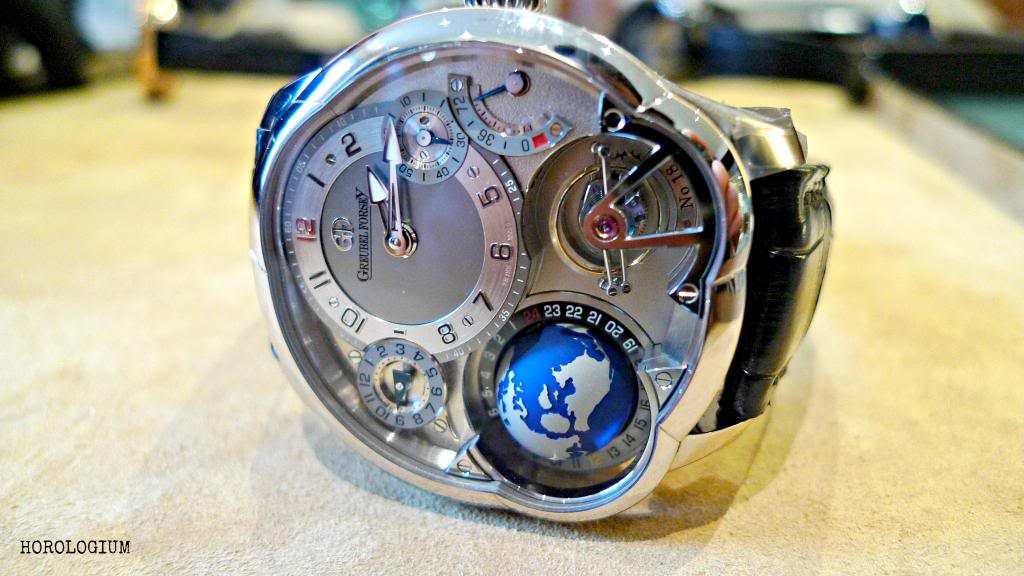 This was only the second time that I’d handled Greubel Forsey pieces and as ever, the finishing on them is one of the things that really stands out for me. The GMT, which I’d seen in photos, is actually even more striking ‘in the metal’. The rotating globe is hard to properly capture in a photo not for any dimensional reason but because it is difficult to capture a proper ‘sense’ of it. Its colour and its sheer physicality are bold but it still manages to maintain a feeling of delicacy.

You can get a more complete view of the globe through a window at the side of the case. It makes a complete (anti-clockwise) rotation every twenty-four hours. 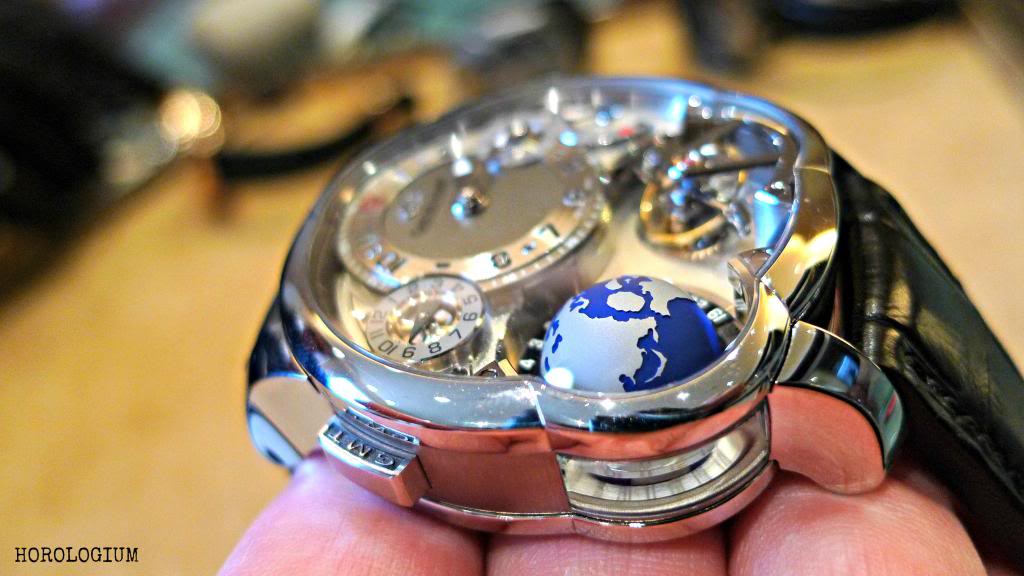 Although of a decent thickness (16.14mm) for obvious reasons, the case itself is only 43.50mm. Nonetheless, because of its thickness, it does sit with a marked presence on the wrist, as is the case with all Greubel Forsey pieces.

The GMT in this post is white gold (it also comes in 5N red gold). It has an asymmetrical convex synthetic sapphire crystal, along with a transparent case back of the same through which you can see the hand-wound Greubel Forsey Calibre GF05 with 72 hour power reserve and patented tourbillon. The movement is 9.80mm thick and has 443 parts. The mainplates are nickel silver, as are the bridges. The tourbillon has 87 parts, inclined at a 25 degree angle and 24-second rotation. The tourbillon cage has titanium cage bridges and a gold counterweight.

Functionally, the GMT has a second time zone indicator at 10 o’clock and a 24 time zone world time display. The rotating glove is titanium with a Universal Time display. There is also a Summer time indicator and day/ night indicator. The dominant hour and minute dial is in frosted gold with anthracite treatment. The hour-ring is also white gold, the hour and minute hands in polished gold with Super-Luminova. Similarly, the smaller sub dials are also in gold, as is the GMT indicator, but the small seconds and power-reserve hands are in blued-steel. The second time zone indicator is a red triangle, to the top left of the dial.

Turning over the GMT reveals the a ‘worldtime’ disc bearing the names of 24 cities. Aligning the relevant city with the local hour on the outer chapter ring – or inner ring for cities with summer time – sets the dial-side globe in the correct position. I didn’t get a good photo of the case back, so here’s a stock photo of it in lieu. 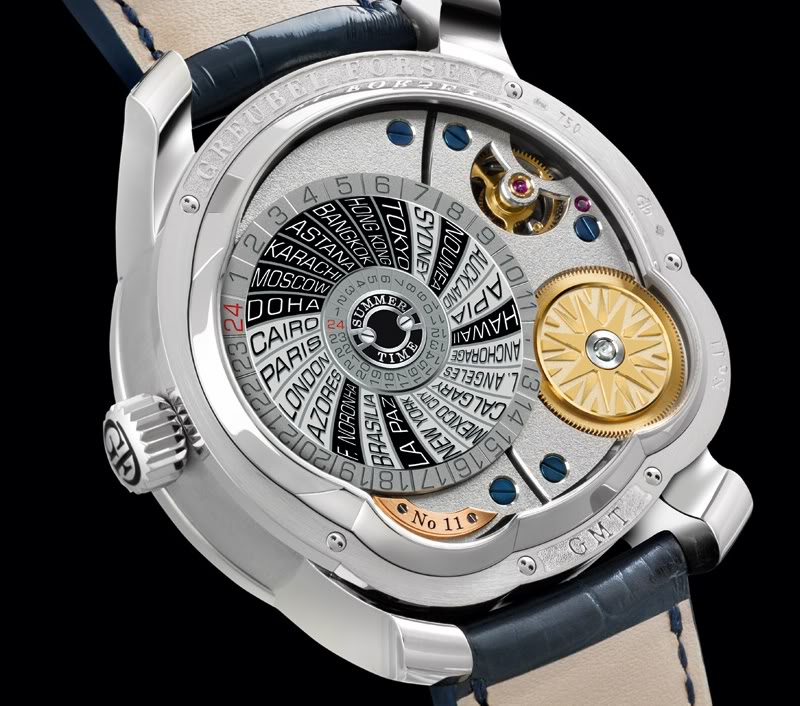 This is a watch that is every bit as beautiful ‘in the metal’ as it is in photos, but as I mentioned above, it is also one that is difficult to capture the ‘spirit’ of in photos. Greubel Forsey’s GMT is not for the faint of wrist (or for that matter, of wallet), but should the opportunity arise to be able look at it, as it did with me during my visit to Marcus, take it.