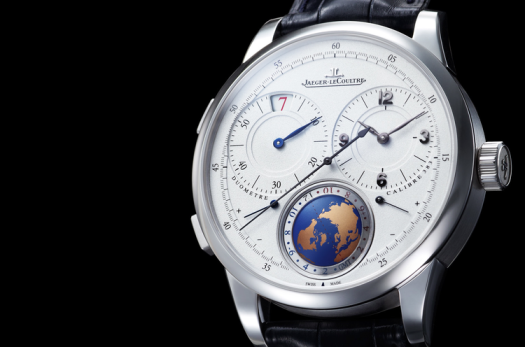 Jaeger-LeCoultre certainly know how to launch a watch and a new boutique. Over the course of two nights in late November, guests were welcomed for dinner and the launch, at the Musée d’Orsay, of a stunning new addition to the Duomètre line in the form of the Unique Travel Time (Ref. 606 35 2J), followed by a boutique opening at Place Vendôme which featured performing horses (sometimes with riders) at a Grand Hôtel cocktail reception live-tweeted by Ines de la Fressange, and Isabelle Huppert and Catherine Deneuve present.

So what is this stunning new watch? Well it involves a new interpretation of Jaeger-LeCoultre’s Dual-Wing movement to create a seriously elegant GMT world-time ‘travel watch’ that allows the user to adjust time in the travel time zone to the nearest minute.

For this new movement, the Dual-Wing system is divided into two mechanisms: the first displays the local time, and the second shows a second time zone. As per the ‘Dual Wing’ design, the two share the same regulating organ but each has its own independent source of energy i.e. the operation of the dual time-zone does not in any affect the running of the watch. There are two +/- power reserve indicators beneath each of the two sub dials.

Each mechanism has a 50-hour power reserve and the same crown winds both barrels.

As is the case with the other members of the Duomètre family, the grained silver-toned dial is pure, understated and elegant, with a finely grained dial showing off two sub dials : the one at 2 o’clock showing the current (home) time and the second sub dial at 10 o’clock showing the second time zone in a digital jump hour configuration, a distinction which I particularly like, and which makes it easier to see the time at a quick glance. Two red 7 and 9 numerals on this dial are a nod to the address of the Jaeger-LeCoultre boutique in Paris.

The day/ night indicator and the hours disc are placed at 6 o’clock and, unusually for Jaeger-LeCoultre, presented like a map of the world that turns and also displays day/ night.

To set the time zone, pull the crown to position one, and to position two for the home time, at which point the seconds hand will also stop.

The two pushers on the left set the GMT zone of the country you live in. The one at 10 o’ clock sets the GMT +1 for each push, and the 8 o’clock pusher is -1 for each push.

Inside is Jaeger-LeCoultre’s 498 part manual wind Calibre 383 (also stated on the dial), which can be seen through the sapphire case back. The movement includes hand-chamfered bridges and gear trains and the engraved names of the cities corresponding to the world’s 24 time zones are engraved on the outside part of the caseback.

The Duomètre Unique Travel Time is in a limited edition of 100 pieces in a 42mm 18 carat white gold case (13.65mm thick) with polished lugs and satin brushed case on an alligator strap with a white gold pin buckle, and has been specially produced for the inauguration of the Jaeger-LeCoultre Place Vendôme in Paris (hence the red 7 and 9 referred to above), and is now available for purchase. I wonder how many orders were placed during the boutique opening night? This is a stunning luxury travel watch, and a more than equal addition to the Duomètre family.