The modern incarnation of the Angelus name/ brand has been as far as you can get from its history, but this year at Watches & Wonders Geneva they made a direct reference to a historical model of note, but also, in the session I attended, acknowledged that although they are ‘celebrating’ the name of the historical model, the new Chronodate is not directly inspired by the very collectible Chronodate/ Chrono-Dato of 1942.

For those unfamiliar with historical chronograph wristwatches, Angelus was (is) an important name for the period between the 1940 and 1960s. They were simple in design and were very much about function.

In 1942, the Chronodate was the world’s first chronograph with a triple calendar showing the day, date, and month. The name ‘Chronodato’ (Chrono-Dato) came the next year, but other than the Angelus and ‘Chronodate’ names, this new model bears basically no resemblance to the original. It cannot be called an ‘homage’.

However, in fairness, the ‘new’ Angelus brand has never pretended to be a heritage-oriented brand, which makes this historical reference even more surprising.

Basically, there’s a bi-compax dial layout (one 30-minute counter and other for the running small seconds) and that’s about it in terms of what ‘remains’. The modern Chronodate is an overhaul and fits into a ‘sports chronograph’ category. There’s large sporty Arabic numerals, a pointer date and syringe-shaped hour and minute hands, but Angelus left out the triple-calendar feature on the all-new Chronodate. 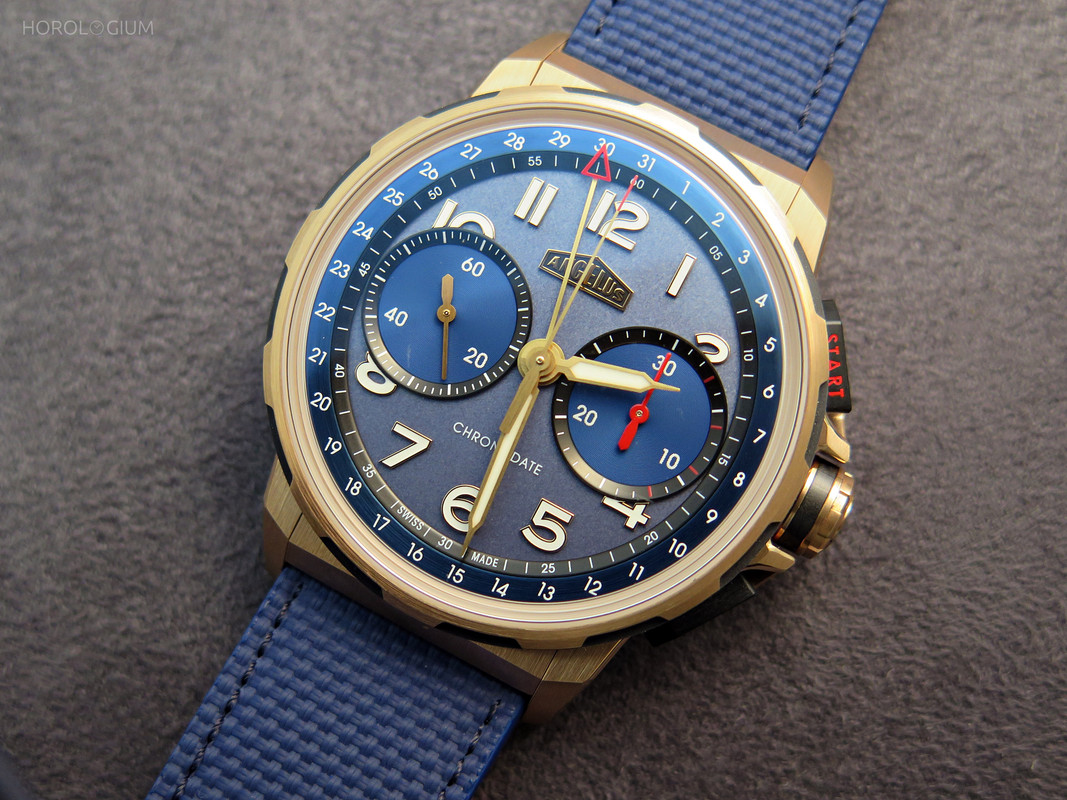 Why would the brand leave out the one signature feature that made the Chronodate/Chronodato so famous?

The new Chronodate comes in a mostly brushed 42.5mm case in titanium or rose gold that has open-worked ‘cutouts’ that start at the tip of the lugs going to the centre of the case. Angelus has also added a very modern rubber ring to the crown. The bezel with its aggressive cutouts is the same as the one used on the Angelus U-41. Underneath its metal surface lies a matte black ring made out of a carbon composite. 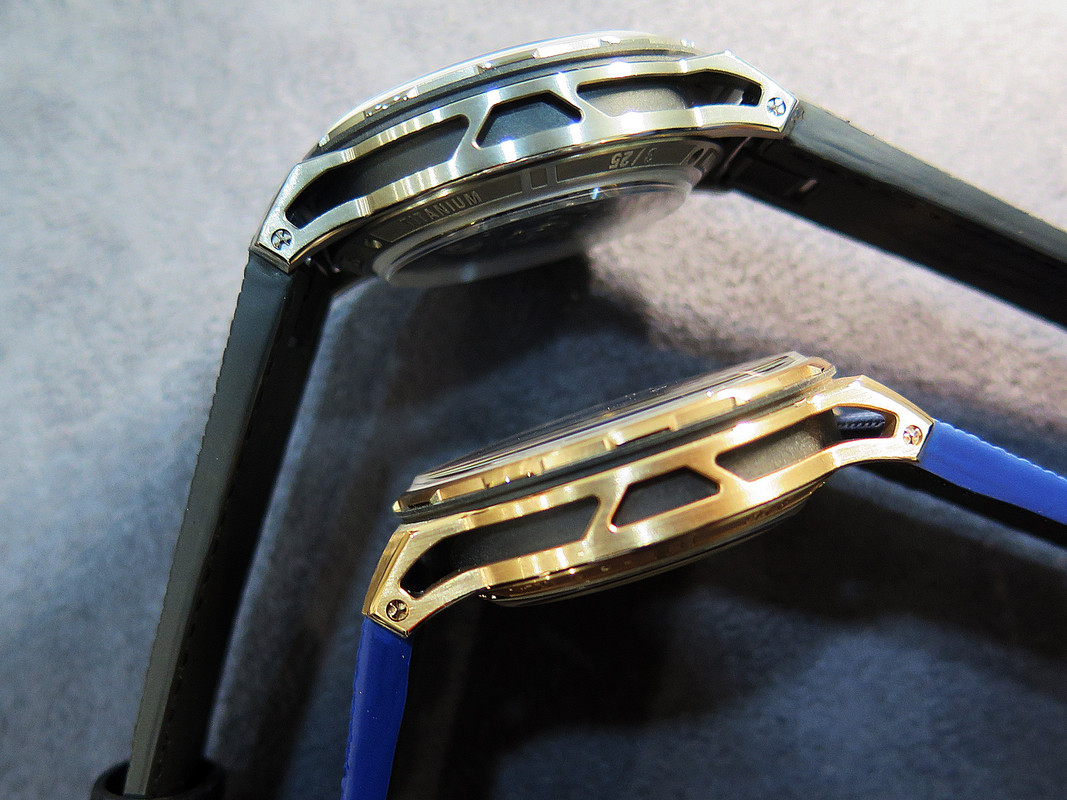 All the three new Angelus Chronodate models (two in titanium, one in rose gold) feature a 30m water-resistant 42.5mm case (14.25mm thick) with 30m water resistance. The titanium case has a monobloc bezel, and with the sub-case and push-pieces in carbon composite. 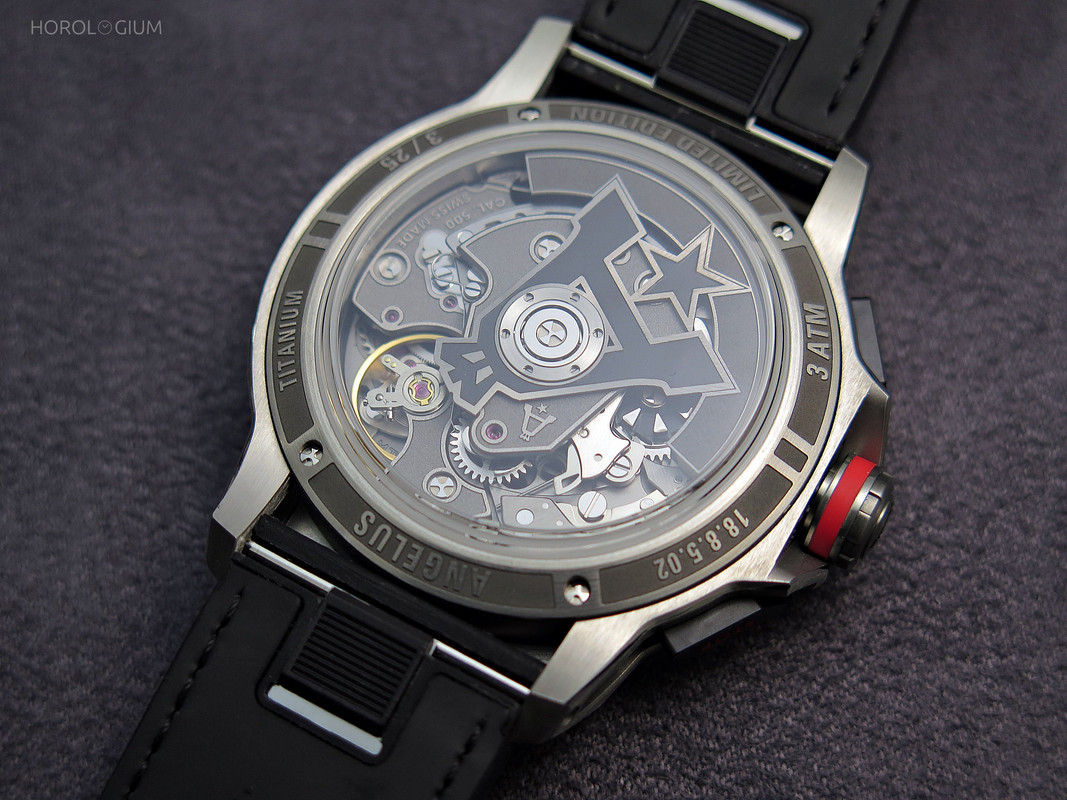 Powering this new Chronodate is the new automatic column wheel chronograph Calibre A-500 which beats at 28,800VPH and has the Angelus logo on its rotor. The movement sits within a container made of carbon composite. The chronograph’s push-pieces and the ring inserted between the case middle and the bezel are also cut from this matte black material. 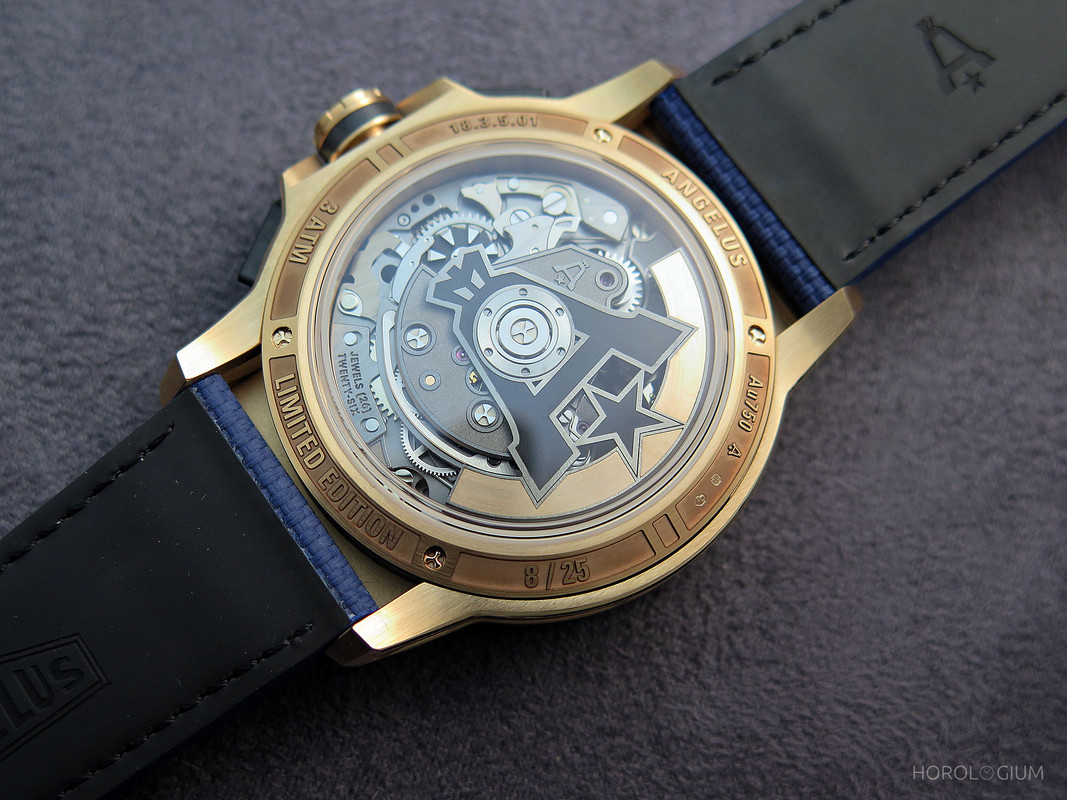 Apart from the 2022 Chronodate’s dial layout, which is pretty standard, there’s nothing much that is reminiscent of the original. It is a modern sports chronograph and vintage fans will probably question its naming. Perhaps the biggest question about this watch is why Angelus revived the name but not all all the functions.

The new Chronodate is available in three limited series of 25 pieces each. The prices are CHF 42,900 for the rose gold and CHF 22,900 for the titanium versions.