Last year, during the announcement of Ferdinand Berthoud’s Chronomètre FB RS, we mentioned their low production numbers (under 30 pieces per annum). That piece itself was (is) limited to a scant twenty pieces in total.

This new model, the Chronomètre FB RSM, continues down the same path both in terms of limitation and in terms of featuring the brand’s well known fusée-and-chain tourbillon movement. Only this time, there is a special additional aspect to a new watch – it has been created with the contribution of an apprentice watchmaker student at the University of Neuchâtel, who worked on it as a part of his graduation project. 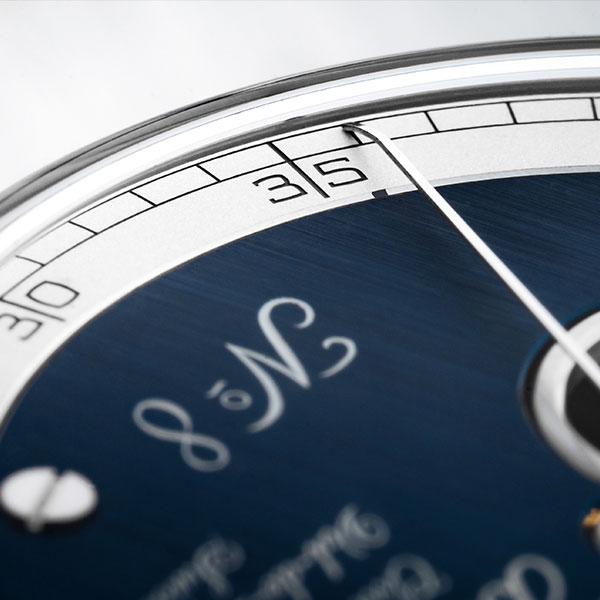 The ‘SM’ of the name refers to ‘seconde morte’ (deadbeat seconds). This new timepiece, and the manually-wound Calibre FB-T.FC-RSM that powers it, combines a tourbillon regulator with a fusée-and-chain transmission together with an independent deadbeat seconds visible on the dial side, and a stop-seconds mechanism that enables the tourbillon to be stopped when setting the time. 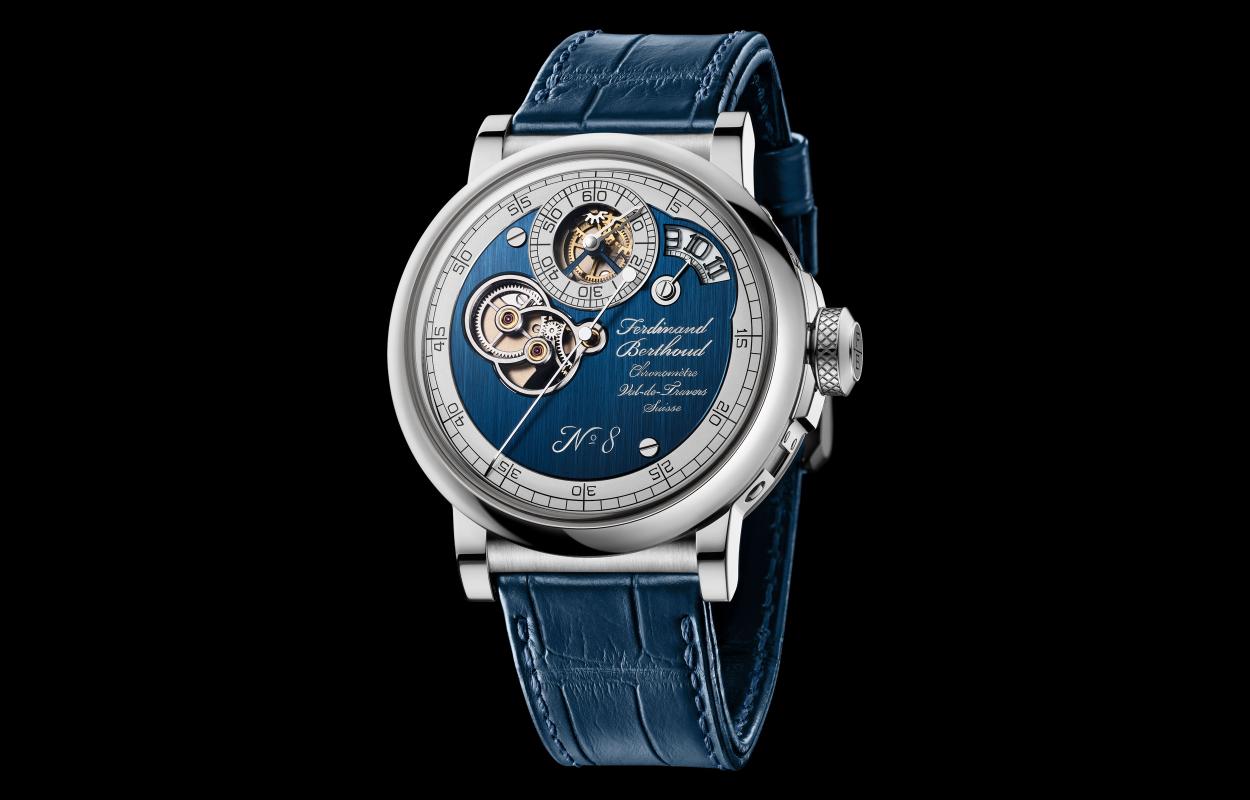 As is so familiar when it comes to the brand’s pieces, there is historical inspiration for this watch. The idea of combining deadbeat seconds with a regulator display comes from Ferdinand Berthoud’s Marine Clock No. 8 (1768).

For the Chronomètre FB RSM, the hours are indicated on a rotating disc at 2 o’clock, and the minutes are on a counter at 12 o’clock. The skeletonised and faceted seconds hand is centrally situated and advances in one-second (deadbeat) jumps. The movement is vertical, regulated by a thermo-compensated balance-spring equipped with inertia blocks. 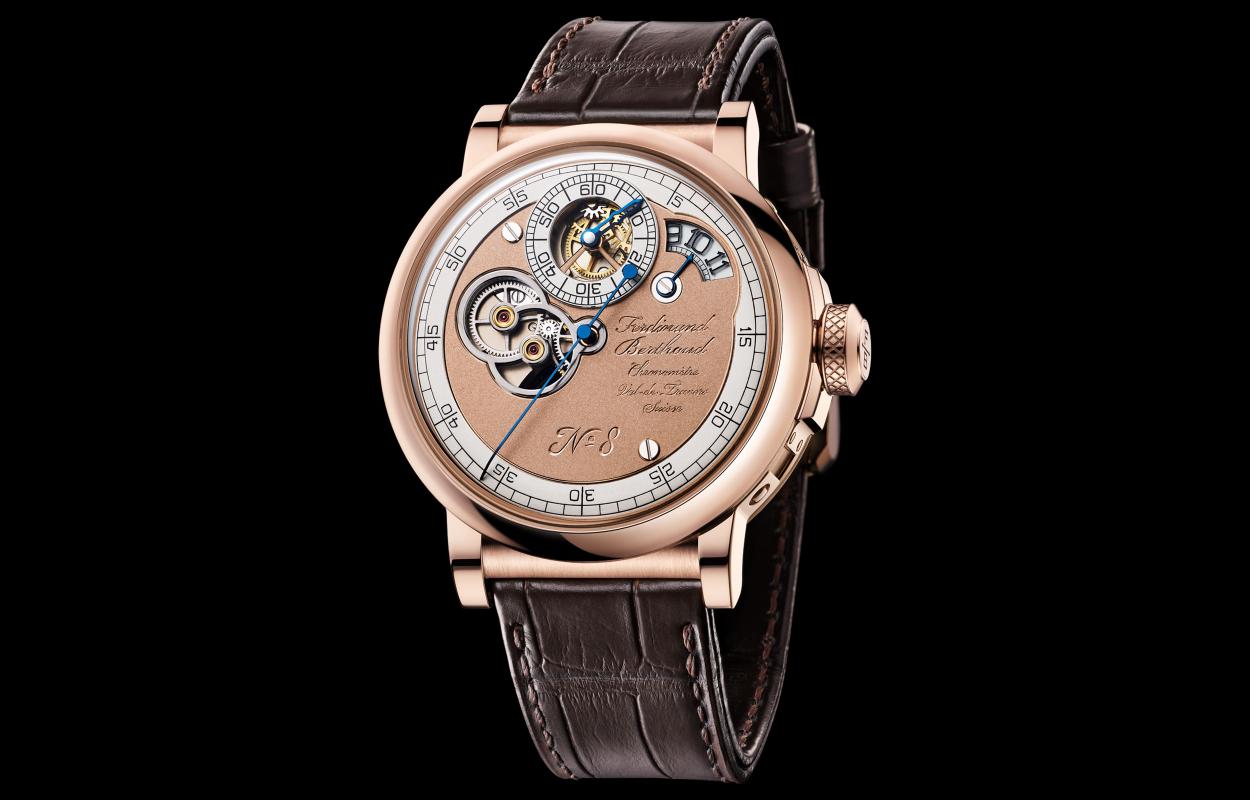 The 18-carat gold dial plate is hand-engraved and bears the “No. 8” inscription as a nod to the No. 8 Marine Clock on which it is based. Part of deadbeat seconds mechanism can be seen through an aperture at 9 o’clock that is symbolically shaped like a figure eight. 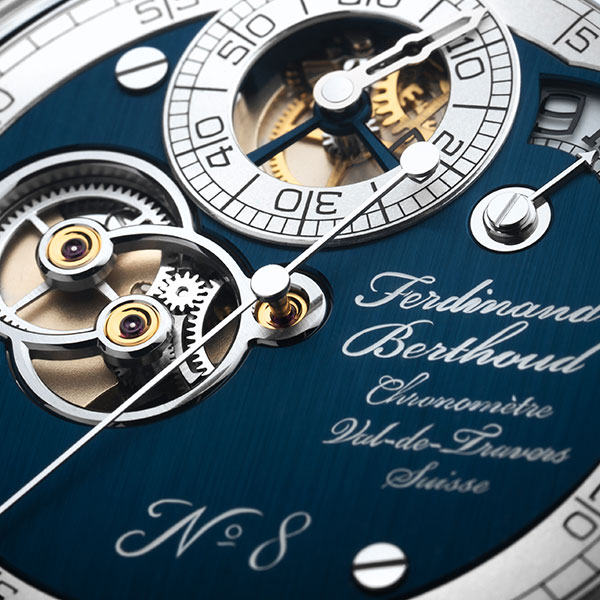 As their graduation project, the (unidentified) apprentice watchmaker started off by researching the history of deadbeat seconds clocks, and combining this with looking at the development of the constant-force tourbillon regulator) calibre. 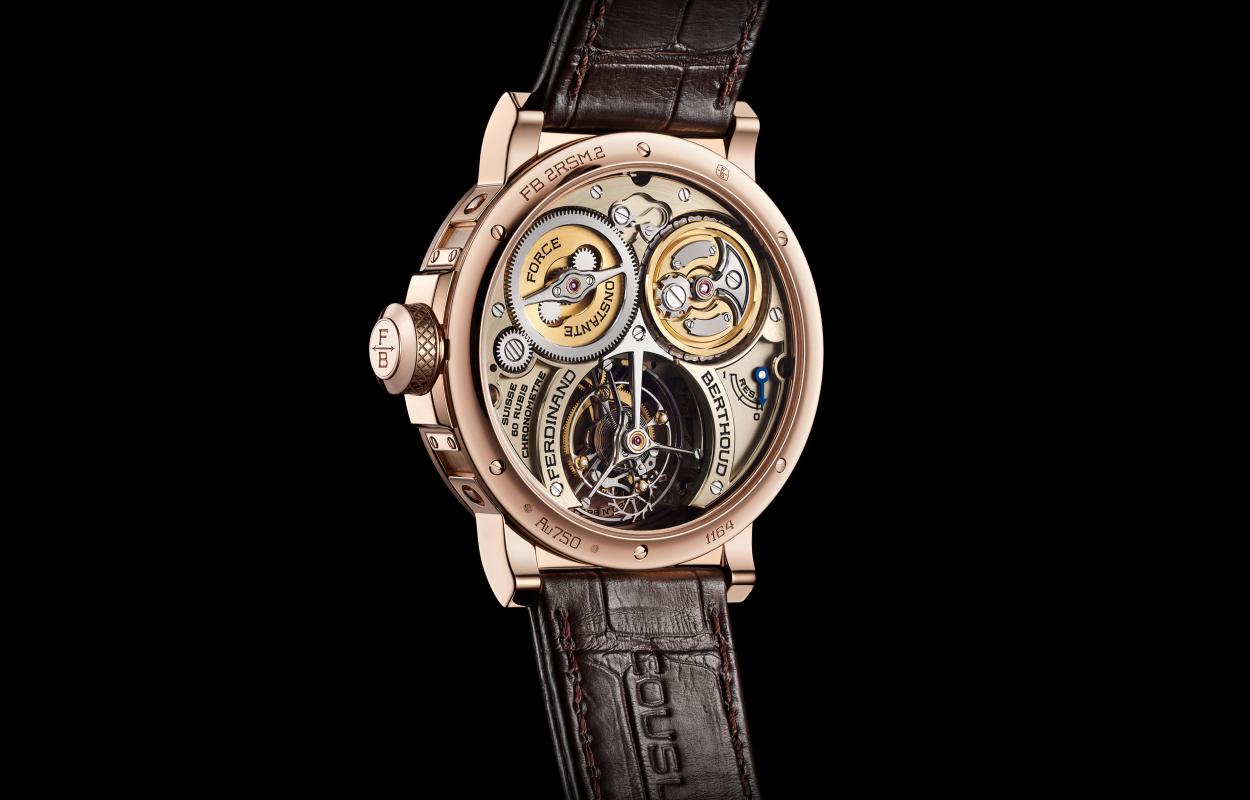 The FB-T.FC-RSM calibre behind this new watch features a pillar-type architecture, with both the (patented) barrel and the inverted fusée suspended. As many of you are familiar with, and which we have covered before, the fusée-and-chain ensures a ‘constant force’ distribution of energy to the patented tourbillon with direct-drive seconds. Ferdinand Berthoud’s construction reduces the thickness of the movement to 9.89mm. 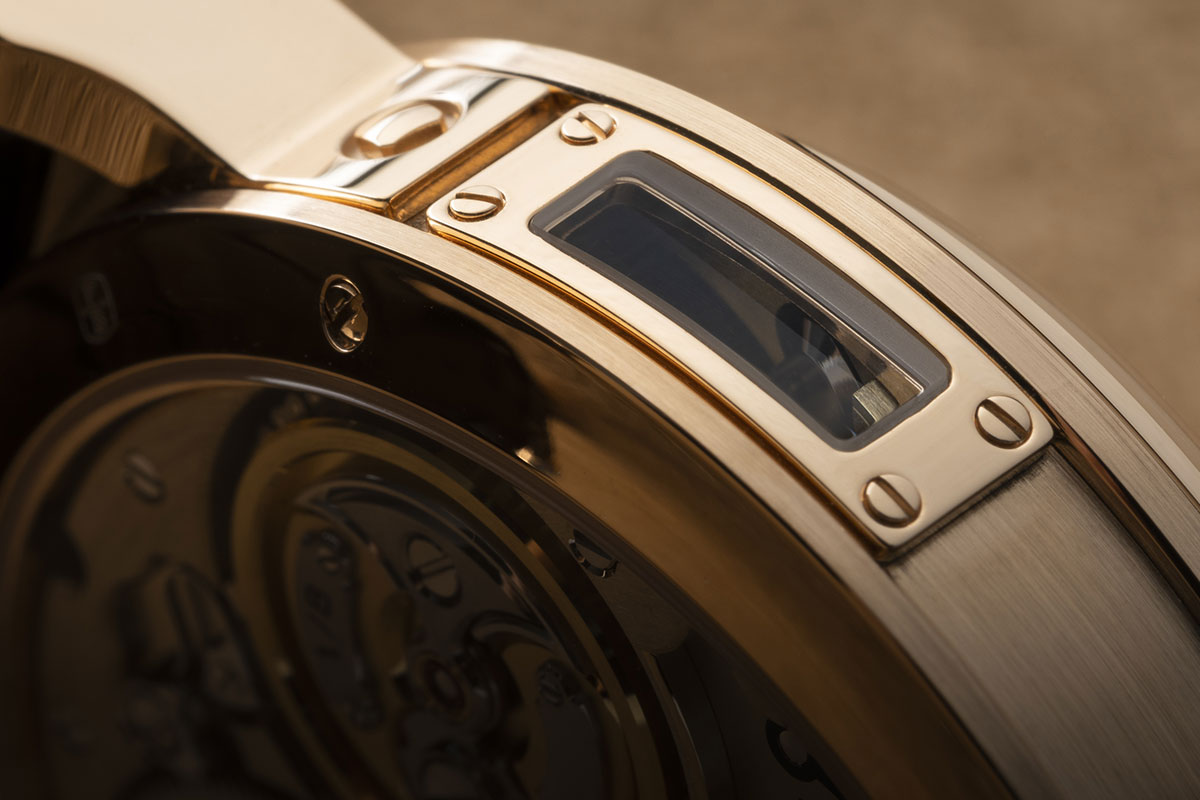 As the name of the brand hints at, Chronométrie Ferdinand Berthoud wanted this new piece to be COSC-certified.

It is harder to get chronometer certification for deadbeat seconds movements because stopping and restarting the central seconds hand in one-second jumps involves stopping the gear train, storing the torque it continues to produce during this pause, then releasing after each second.

The regularity of the torque is fundamental to having the constant force, so interrupting its flow 60 times a minute is an issue with COSC certification. How was this done? By ensuring that the deadbeat lever spring led to only a minimal loss of amplitude for each jump of the seconds hand.

The 53 hour power reserve indicator is on the back of the watch. You can also see the inverted fusée, mainspring barrel, plus the stopwork and tourbillon supported by an arrow-headed bridge. 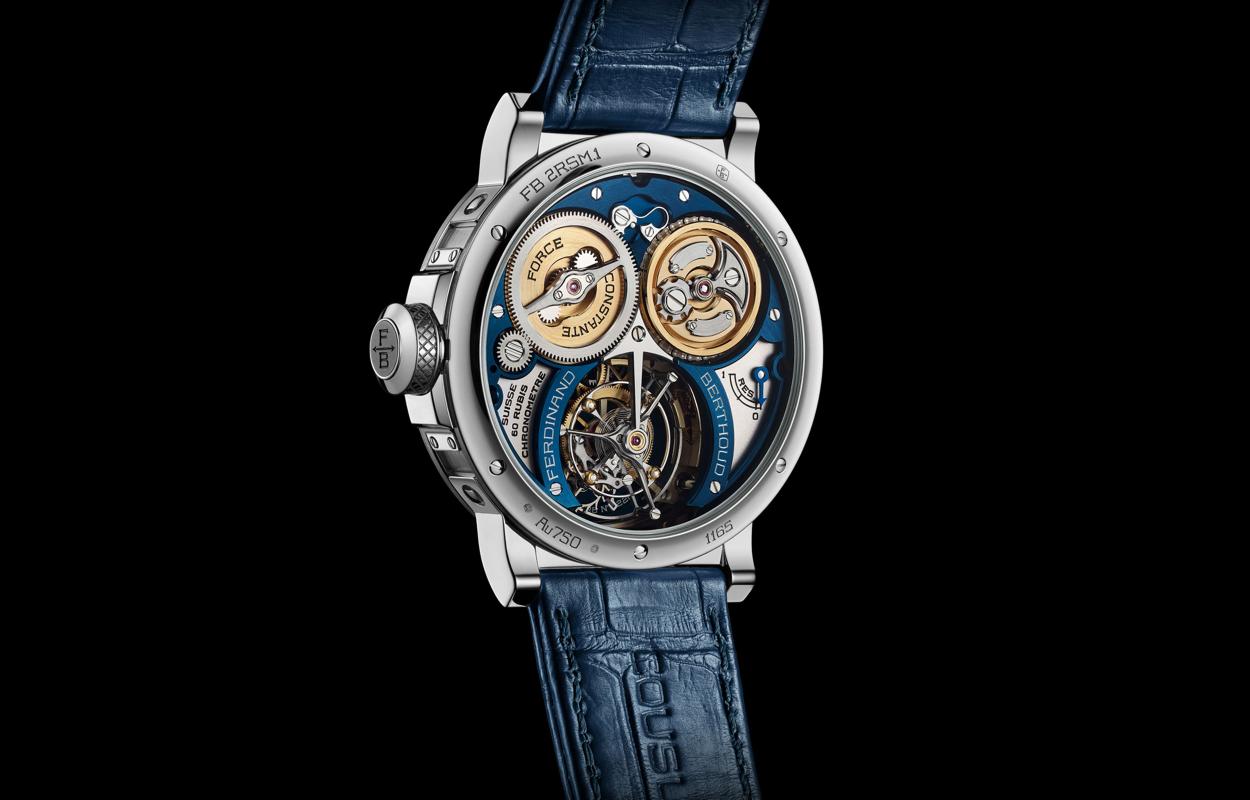 Since the creation of the modern Berthoud brand its ethos has been clear. It makes very small numbers of timepieces that are modern interpretations its namesake’s clocks for clients who want are looking for something with horological heft, for whom movement finishing is important, and who have the inclination and wherewithal.

This latest Chronomètre FB RSM fits neatly into their collections. Although I have not yet had the opportunity to see it ‘in the metal’, having handled Ferdinand Berthoud watches, I can feel confident that the quality and finishing of the FB RSM will be on par with the ones that I have seen.

As mentioned at the outset, last year Chronométrie Ferdinand Berthoud announced that its limited editions will be about the number of movements made, with a focus on customisation.

For the Chronomètre FB RSM, only 20 movements will be produced. The owners will be able to choose the shape of the 44mm case (round or octagonal) and the case material (18K red gold, 18K white gold, 950 platinum, and carburized steel) as well as the tone and finishing of the gold dial plate, with different PVD treatments available. The 18K white gold (FB 2RSM.1) and 18K red gold (2RSM.2) versions pictured are priced at CHF 270,000 but obviously, the cost of any customised pieces will be on a case-by-case basis.