ZENITH : A modern homage to the A. Cairelli Tipo CP-2 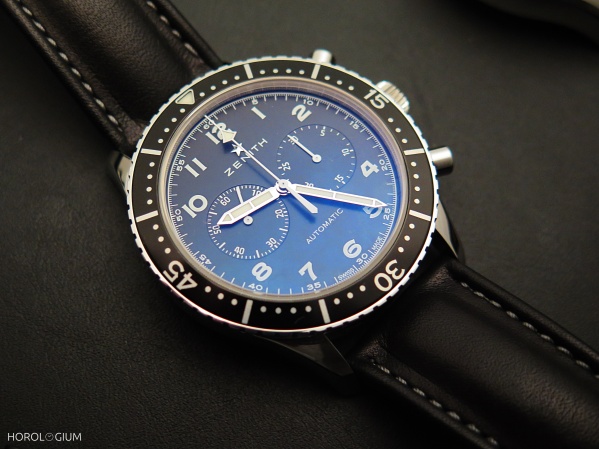 Today we bring you probably my favourite release from Zenith to date this year, a limited edition modern homage to their famed A. Cairelli Tipo CP-2. It is not only a good looking watch in and of itself, but it also bears a very faithful resemblance to the original, making it an attractive modern version of a rare watch.

Let’s start off by going back a few decades.

In the 1960s and 1970s a number of Swiss watch brands created chronographs for the Italian army, with the denominations CP-1 and CP-2.

The ‘A. Cairelli Roma’ name attached to the Tipo CP-2 on which this new watch is based refers to the Roman watch/ clock/ instrument retailer A.Cairelli in Rome, who was responsible for supplying the Italian Air Force (Aeronautica Militare Italiana – AMI) with watches and cockpit instruments for over 40 years. Think about having it on the dial as something similar to having ‘Tiffany’ on Patek Philippes, for example. ‘CP’ stands for ‘Chronometro da Polso’ (bracelet chronograph). 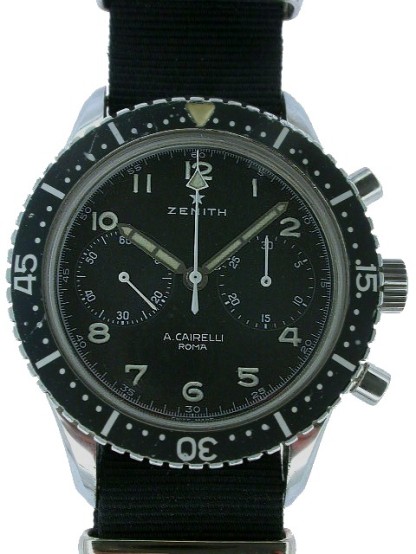 [Photo from the internet]

Although this watch was designed for AMI pilots, not all of the 2,500 examples were issued to them, with speculation that Cairelli held on to the pieces that the AMI did not want, and quietly sold them. This, as well as their inherently beautiful design, has increased their desirability over the years amongst milwatch, chronograph and Zenith enthusiasts alike. The ones that A.Cairelli sold are characterised by the lack of military markings on the case back.

As well, there were some that weren’t issued to the AMI but to other branches of the Italian military, distinguishable by the letters on their case backs, which makes four Tipo CP-2 variants in total :

The original Zenith Tipo on which this modern homage is based was a 43mm three-part stainless steel case with a domed acrylic crystal, screw-down solid case back, an anti-magnetic soft iron cap and round chronograph buttons on the case. It had a 60-minute bi-directional black bezel and the black dial had luminous material painted Arabic hour markers, lumed steel baton hands, and an arrow-tipped centre sweep chronograph second hand.

Part of its classic good looks are down to the dual register format, with a small seconds dial at 9 o’clock and a 30-minute counter at 3 o’clock. As you can see, the new model’s update of the original in this regard is pretty much as ‘original’ as even vintage fans, could wish for. There’s no major changes made with the counters.

Inside the original CP-2 is the hand-wound Calibre 146DP, based upon the Martel Calibre 749, a design coming from a manufacture which Zenith purchased in 1960. Zenith would, of course, go on to create the El Primero chronograph movement, one of the world’s great movements and what they have naturally chosen to put inside the 2016 model.

As you will have noticed, I mentioned Universal Genève above. It, along with Breitling and Leonidas, were the other brands that with Zenith, had Tipo CP-1/ CP-2s distributed by A. Cairelli.

This 2016 model is 43mm, as per the original. The choice to retain the same size is, in my view, the right one. It is a comfortable size even now, and this one sits more like it could be 40-42mm. As mentioned, it uses the El Primero movement, and the stainless steel case has 100m of water resistance. It comes on the black strap in the first photo; we tried it on a brown NATO-style leather strap for variety.

If there was one small thing that some purists might quibble about it would be the ‘AUTOMATIC’ on the dial, but my guess is that this is for balance. In the absence of the original ‘A. CAIRELLI ROMA’ markings, perhaps they felt that something should be maintained there, for balance.