Girard-Perregaux’s new Tourbillon with Three Gold Bridges Ruby Heart is the latest special manifestation of their famed gold bridges, this time inspired by the professional and private partnership of Constant Girard and Marie Perregaux.

The Girard-Perregaux name as we know it came into being in 1856, four years after the establishment of Girard & Cie, with the marriage of Marie Perregaux and Constant Girard.

Launched in 1860 (and with a patent registered in 1884), the tourbillon with three golden bridges, which was to become perhaps Girard-Perregaux’s most enduring horological trademark, was not just a significant technical achievement but also aesthetically avant garde for the time. In that era, watch movements were about utility first and design second; although there were obviously movements of beauty, these were not the norm.

The most famous example of the three bridges is the rose gold ‘La Esmeralda’ pocket watch, for which the Paris Universal Exhibition of 1889 awarded a gold medal. It took its name from the Paris and Mexico City shops of a watch dealer, and at one time was owned by General Porfirio Diaz, President of Mexico. It now forms a part of the Girard-Perregaux museum collection.

In fact such is the value placed by the brand on it, that the Esmeralda wristwatch was chosen to mark the 225th birthday of Girard-Perregaux; this date derives from the watchmaking brand Bautte, established in 1791 and merged with Girard-Perreguax in 1906.

Girard-Perregaux put the three bridges aside, ceasing production in 1911 and focusing on more modern offerings until 1981, when they revived it in the form of a pocket watch.

This new Tourbillon with Three Gold Bridges Ruby Heart comes in a 38mm pink gold case (11.35mm thick) set with 56 brilliant-cut diamonds (1.25cts) and 18 brilliant-cut rubies (0.36ct) on the bezel. The ‘ruby heart’ of the name is a natural material formed within a zoisite stone.

The ruby heart is cut into thin plates, shaped and polished to the desired thickness for the dial, and there is also a cabuchon of polished ruby heart in the crown. 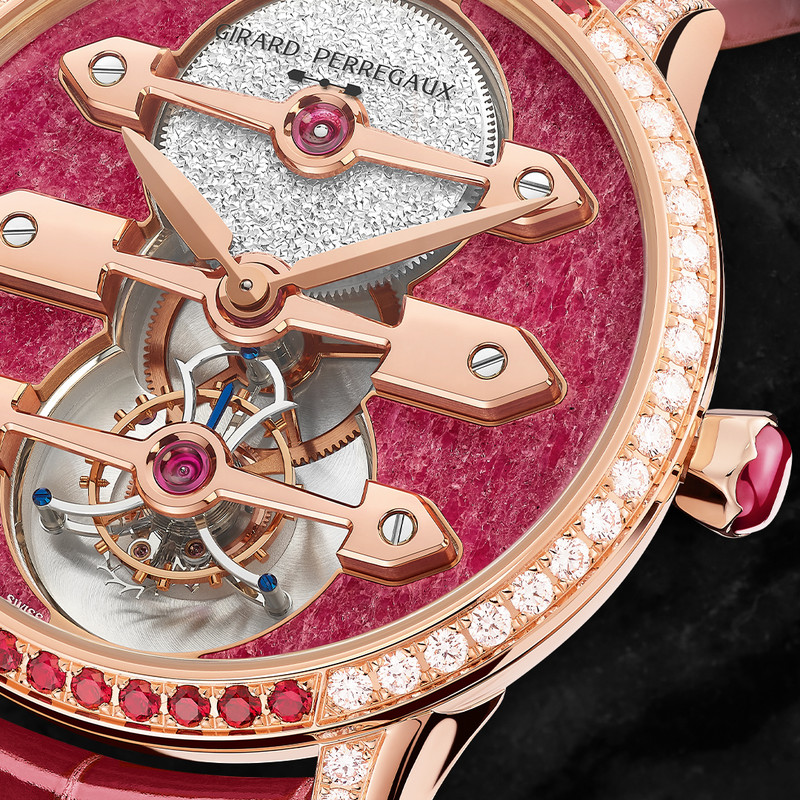 Powering the watch is the automatic Calibre GP09600-1620, which beats at 21,600 VPH and has a power reserve of 50 hours. It has a micro-rotor located behind the barrel. The upper bridge, at 12 o’clock, straddles the barrel, which has a hand-engraved white gold disc. Beneath the central bridge is the hour wheel. The final bridge at the base of the dial spans the lyre-shaped mirror-finished tourbillon. 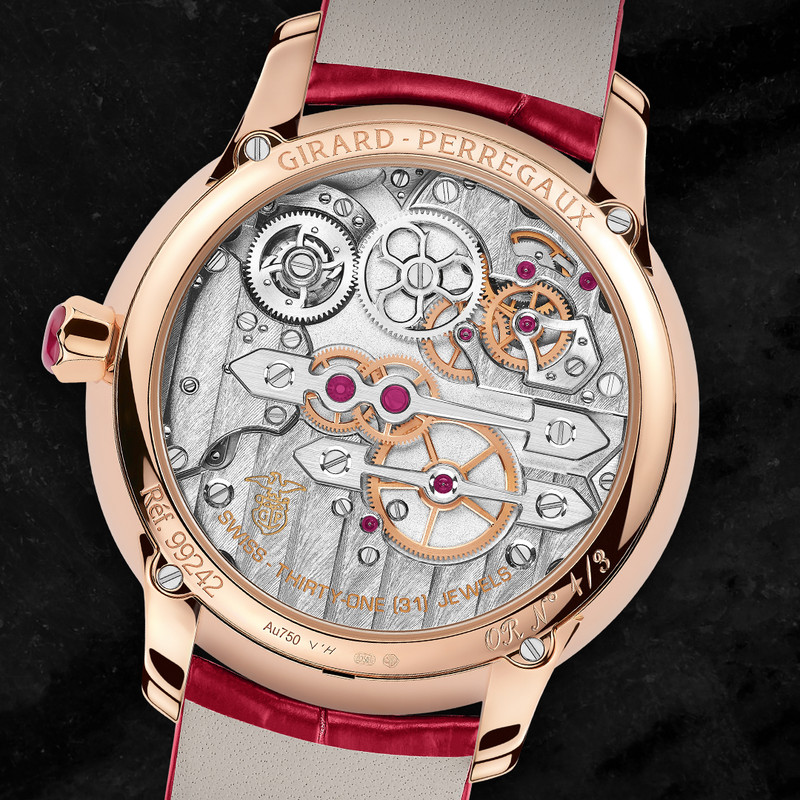 Coming on a red alligator strap with a folding buckle, this is a very limited edition of only three pieces, with a price of USD 202,000.