We have covered numerous iterations of the A. Lange & Söhne Zeitwerk over the years, and similarly the “Lumen”. In fact the new Zeitwerk Honeygold “Lumen” is the fifth “Lumen” model, but this new piece’s luminous Zeitwerk digital jump hour is powered by a new in-house movement, and housed within Lange’s proprietary Honeygold alloy.

For those unfamiliar with them, the “Lumen” name is nicely self explanatory – it refers to the use of specially coated semi-transparent dials through which for this new Zeitwerk, the luminous jumping numerals are visible. The dial’s coating allows the luminous numerals to absorb sufficient UV light needed to make them light up when in a dark environment. In the dark, only the numerals in the two display apertures will glow. The integration of a pusher for the hour indication has led to an increase in the number of movement parts for the new manually-wound Calibre L043.9. To enable the correction independently of the switching cycles of the time display, a clutch uncouples the hour ring from the jumping numerals mechanism each time the pusher is pressed. 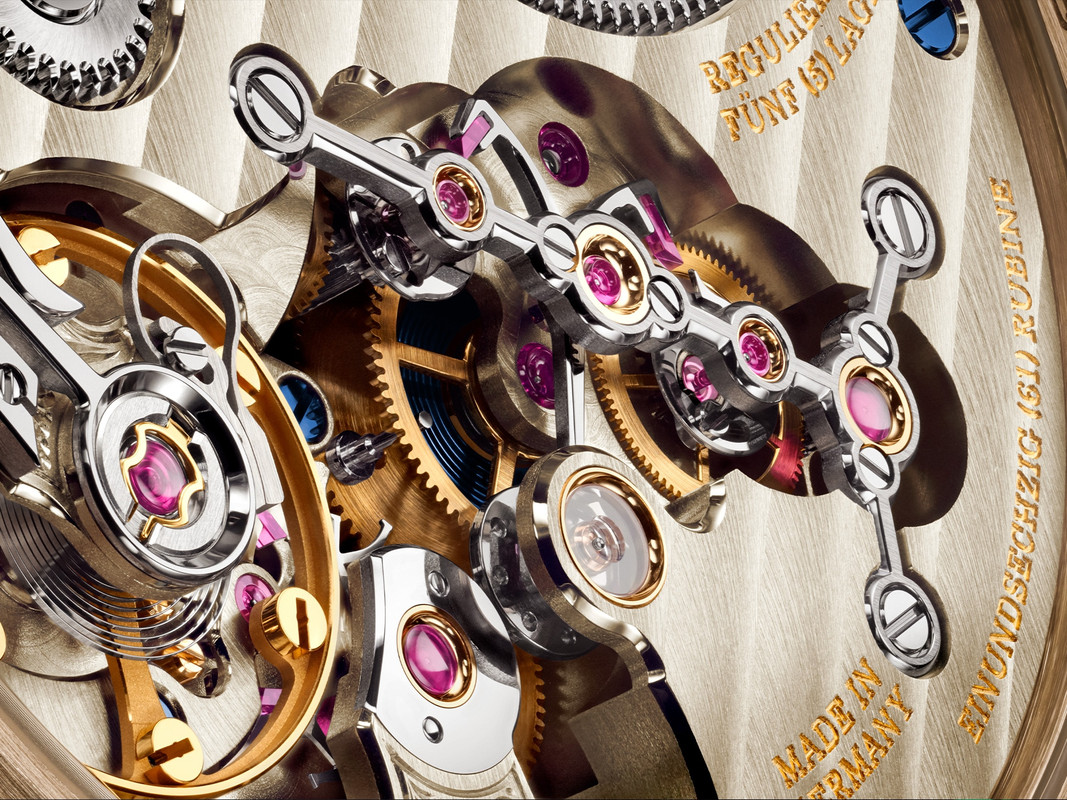 Two mainspring barrels deliver the power needed for switching. The switching cycle is controlled by a patented (second generation) constant-force escapement that does two things – generates the impulse for the jumping time display, and drives the balance with constant power. The Calibre L043.9 beats at 18,00 VPH and has 72 hours of power reserve. The open case back shows off many of the features of the updated movement, such as the classic Lange hand-engraved balance and escape-wheel cocks, and the filigreed straight-grained constant force escapement bridge that has two recessed gold chatons.

Speaking of the movement, the dial side is dominated by the curved bridge. For this new model it is black rhodium-treated German silver, chosen to to complement the sapphire-crystal dial. The case of the new Zeitwerk Honeygold “Lumen” is 41.9mm and made from Lange’s proprietary honeygold, a gold alloy that we have handled (and posted about) before. The hands of the power-reserve indicator and the subsidiary seconds are also made from Honeygold.

Coming on a dark brown leather strap with a Honeygold buckle, the new Zeitwerk Honeygold “Lumen” comes in a limited edition of 200 pieces. It is boutique-only and has a price of EUR 114,000.