Chiming is the name of the horological game for Bvlgari at LVMH Watch Week 2022, with the launch of two new Octo Roma models – the pièce unique Octo Roma Emerald Grande Sonnerie and the limited edition Octo Roma Blue Carillon Tourbillon.

In 2018 Bvlgari unveiled the one-off Octo Roma Grand Sonnerie Perpetual Calendar, positioned at the time as their most complicated watch. Grand Sonneries in and of themselves are an uncommon horological grand complication achievement, let alone pairing it with another complication like a perpetual calendar.

It was created to commemorate 25 years since Gerald Genta’s first Grand Sonnerie in 1994, and followed by the even more extravagant Octo Roma Grande Sonnerie Perpetual Calendar Diamonds, which combined a white gold and titanium case with baguette-cut diamonds – 6.57 carats of diamonds (88 stones) on the bezel and lugs and another 1.23 carats of diamonds (35 stones) on the folding clasp. It is the same size as the Octo Roma Grand Sonnerie Perpetual Calendar, with the dial being the location of of 374 of the baguette-cut diamonds, and the bezel and lugs for 72 baguette-cut emeralds. The crown is set both with baguette-cut and one round rose-cut diamond.

Unlike the Grand Sonnerie Perpetal Calendar, the gemstone dial means that the chiming part of the watch is a little less immediately noticeable, with the semicircular indicator between 1 o’clock and 2 o’clock being the only hint, and the placement of the power reserve at 4 o’clock confirming its movement lineage. The functions are hours, minutes, grande and petite sonnerie, a 4-hammer Westminster Chime, and minute repeater.

So what is a grande sonnerie? The term means ‘grand strike’ in French (a petite sonnerie being a ‘small strike’), and it refers to a complication in a mechanical watch or clock which combines a passing quarter striking mechanism with a repeater. The hours and quarters chime ‘en passant’ – as they pass. In the case of wristwatches, this means that means that on the quarter hour it strikes the number of hours audibly on a gong, and then the number of quarter hours since the hour on a second gong. For clocks, the quarters come before the hours.

The hour and quarter strikes can also be activated on demand at the push of a button. So a grand sonnerie timepiece not only strikes the hour, quarters and minutes on request like a traditional minute repeater, it can also strike the hours and quarter hours automatically without activation. In the petite sonnerie mode, the watch chimes the hours, and the automatic chiming is deactivated in the silent mode. All the chiming functions can be activated or deactivated on demand by buttons on the side.

Bvlgari have put a Westminster Chime in this piece. The bespoke watch is paired with a vibrant green alligator strap to complement the emeralds on the bezel and features a white gold folding clasp set with four rows of baguette-cut diamonds.

Next up is the new Octo Roma Blue Carillon Tourbillon. 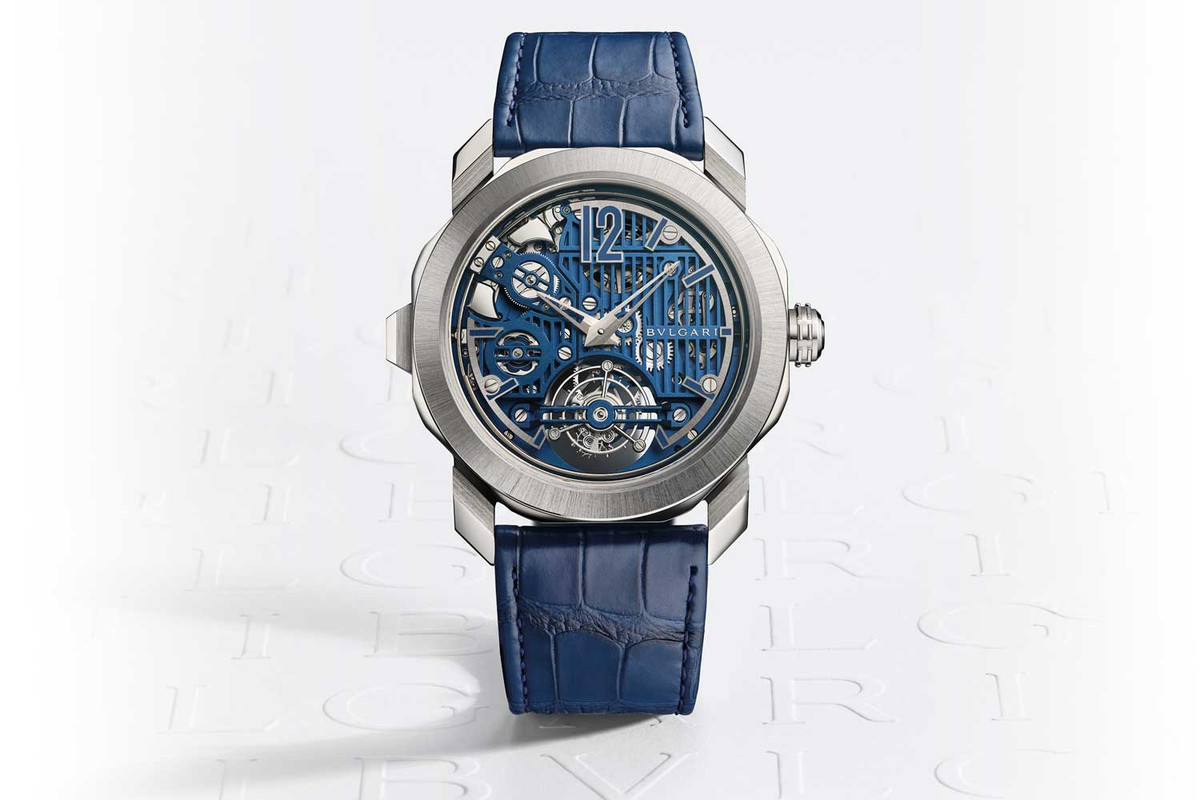 Combining a tourbillon with a repeater, the watch has a open-worked dial with blue bridges. 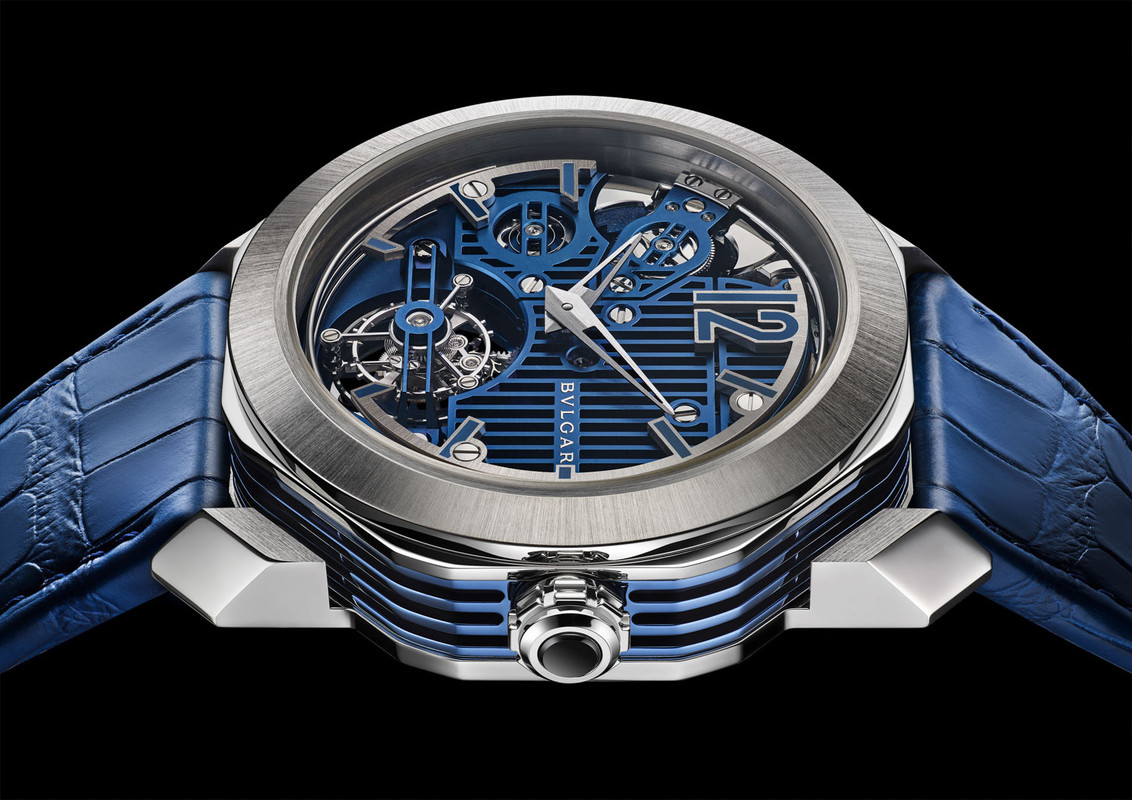 The carillon aspect of this piece means that it has three gongs and hammers instead of the two on a standard chiming watch, and therefore strikes the quarter hour with three successive notes (high, middle, low) instead of two. So the watch is a minute repeater with a 3-hammer carillon with Westminster chime, regulated by a tourbillon.

The gongs are bent, formed and fired by hand. In terms of the chimes, C is for the hours, notes E, D, C for the quarter, and the note E for the minutes. It is activated by a pusher on the left.

The open worked dial highlights the carbon-based vacuum-deposition coating blued treatment on the movement, and this can also be seen through the open case back. The large ‘12’ is a new addition. 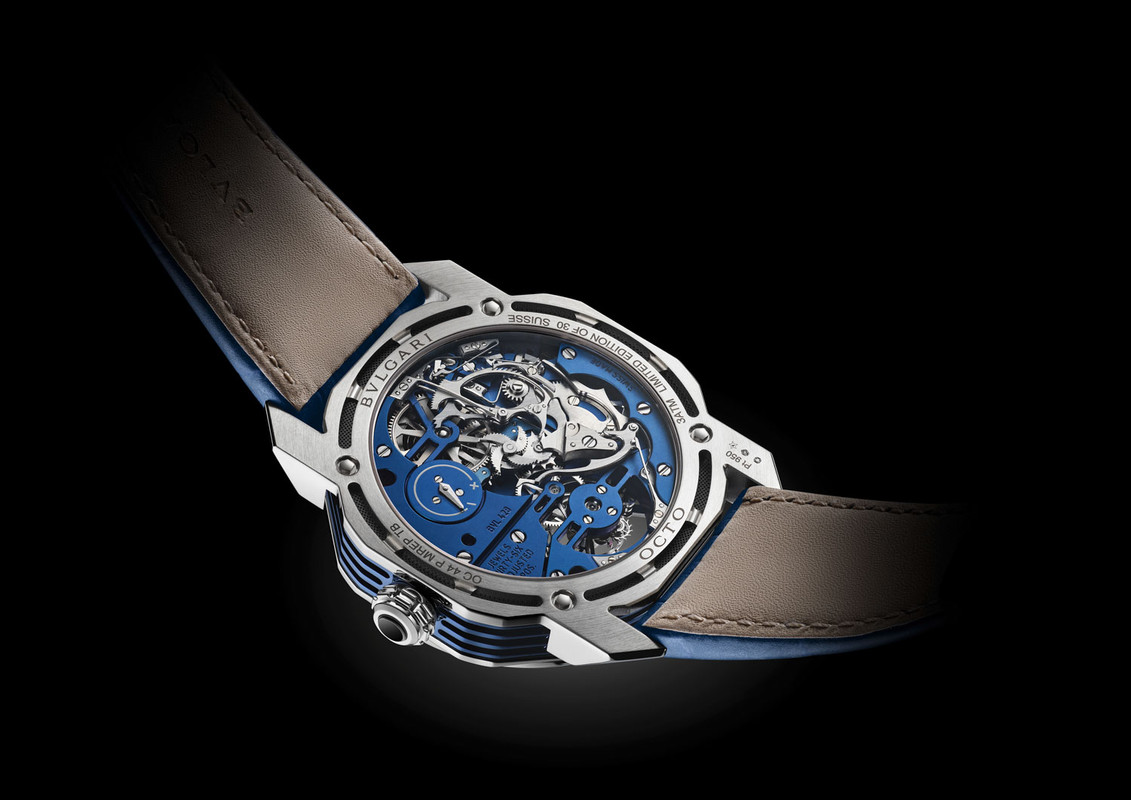 The Octo Roma Blue Carillon is powered by the in-house manually wound Calibre BVL428 (same as the carillon last year). The hammers, gongs, tourbillon cage, and perforated surfaces are polished steel, and the main plate and bridges feature ALD treatment. The movement has two barrels, one for the chiming function and the other for the 75 hours of power reserve. The power reserve indicator can be seen through the open case back.

The gongs of the BVL428 are hand made and then annealed at 900 degrees before being cleaned, heated again at 500 degrees, then finished and adjusted by the master watchmaker.

In keeping with the blue theme, the Octo Roma Blue Carillon comes on a matching alligator strap with a platinum folding clasp and will be in a limited edition of thirty pieces.