Travel seems but a distant memory at the moment, and being in Geneva for what was then SIHH when I was last there, even more so. But we can still think about travel again, and so it is that Vacheron Constantin, in a pleasantly familiar move, have released a trio of boutique-only limited editions as a part of their Metiers D’Art collection in tribute to three great explorers – Bartolomeu Dias, Vasco da Gama, and Pedro Álvares Cabral.

Back in 2004, Vacheron Constantin launched a series of limited edition pieces celebrating the lives of great explorers. Created under the Métiers d’Art banner, they were notable for the way in which they combined various artistic skills into some frankly gorgeous pieces. These first watches were dedicated to Fernand de Magellan and Zheng Hé, and both limited to sixty pieces each. In 2008, two more models were added – Marco Polo and Christopher Columbus, also limited to sixty pieces each.

All of these came in yellow gold cases and were powered by the classic Calibre AT 1120. The Calibre 1120 AT is known for its slimness and thus, the new watches are only 11.68mm thick.

Now, Vacheron Constantin have continued the Métiers d’Art Tribute to Great Explorers collection with an homage to three 15th century Portuguese explorers – Bartolomeu Dias, Vasco da Gama and Pedro Álvares Cabral, in a very limited series of ten timepieces per reference. This time, they are in 41mm sized 4N pink gold cases, but the movement for the off-centred time display is still the Calibre AT 1120.

The new Explorers feature the same core look – a two-layered grand feu enamel dial with miniature painting and enamel hour markers on an 18kt white gold dial base. For the new triumverate, the design is inspired by sections of a map from the Miller Atlas (1519).

Written in Latin and Portuguese and known as the Lopo Homem-Reineis Atlas, this cartographic work is a volume of six sheets of vellum, an illustrated atlas with charts which was the joint work of cartographers Lopo Homem, Pedro Reinel and Jorge Reinel, and illustrated by António de Holanda.

It shows the world as it was known during the Renaissance, including what we now know as the North Atlantic, northern Europe, the Azores Archipelago, Madagascar, the Indian Ocean, Indonesia, South Pacific, the Moluccas, Brazil, and the Mediterranean.

Commissioned by King Manual I of Portugal, it was purportedly meant to be a gift from Francois I of France. With the arms of Catherine de Medici on its verso, originals of the remaining maps were sold by the bookseller Charavey in 1855 to Manuel Francisco de Barros e Sousa de Mesquita de Macedo Leitáo e Carvalhosa, Viscomte de Santaré́m, from whom it was acquired by librarian Bénigne Emmanuel Miller. It was sold by his widow to the Bibliothèque Nationale de France in April 1897 and is now known by his name. 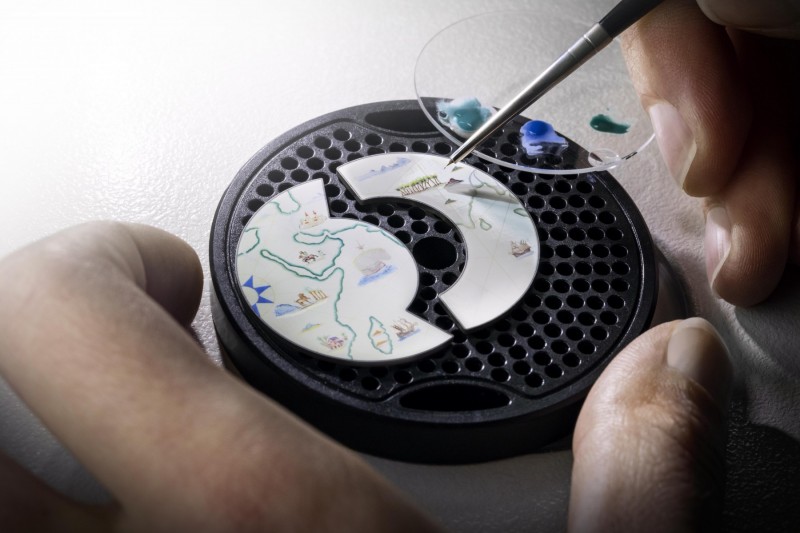 Each of the stunning dials of these new watches shows a part of the world and the maritime routes taken respectively by the three explorers. They take one month and eleven kiln firings to complete, with the process involving so many steps because of the complexity of layering the colour then the outlines, application of decorative details etc, each of which requires firing between them. 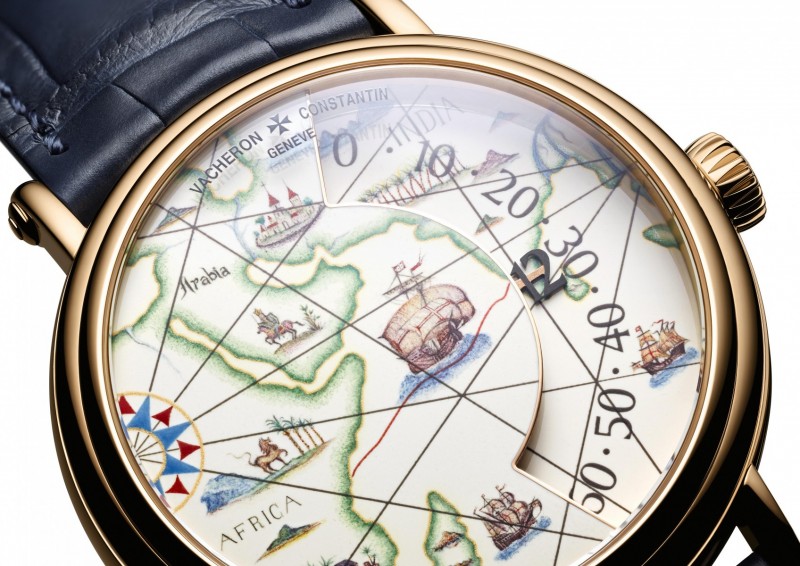 Bartolomeu Dias (1450 – 1500) was the first European to sail around the southernmost tip of Africa in 1488 and find the Cape of Good Hope. In so doing, he set up the route from Europe to Asia. The route taken on the 1488 expedition is represented by a red line on the dial. Other details, in the fashion of the Miller Atlas, include tiny silhouettes representing the ships’ crew, as well as the landscape, flora, and fauna of the west African coast. Dias’ discovery paved the way for Vasco da Gama’s voyage to India. In fact, he helped build two ships, including the São Gabriel, that were used by Vasco da Gama. He joined da Gama in 1497 for his expedition to India, but left the journey at the Cape Verde Islands.

The most famed Portuguese explorer of them all, Vasco da Gama (1469 –1524), was the first to travel from Europe and Asia by sea, across the Atlantic and Indian Oceans. After circumnavigating the southern tip of Africa, his fleet of four ships sailed to Kenya before crossing towards the Indies, which they reached in 1498.

Again, his sea route is indicated in red enamel on the dial, in a faithful reproduction of the map in the Miller Atlas. The depiction of a ship includes details such as billowing sails.

Pedro Álvares Cabral (1467 – 1520) was commissioned by King Manuel I of Portugal to travel to the Indies to continue the work of Vasco da Gama. Rather than sailing along the African coast to the southern tip of Africa he went west, and is credited as the first European to reach Brazil. In 1500 he conducted the first substantial exploration of the northeast coast of South America and claimed it for Portugal. Cabral’s route is in red enamel and the dial’s details, because one of the Miller Atlas’ maps is about Brazil, is a more faithful representation of it, including birds and more humans. 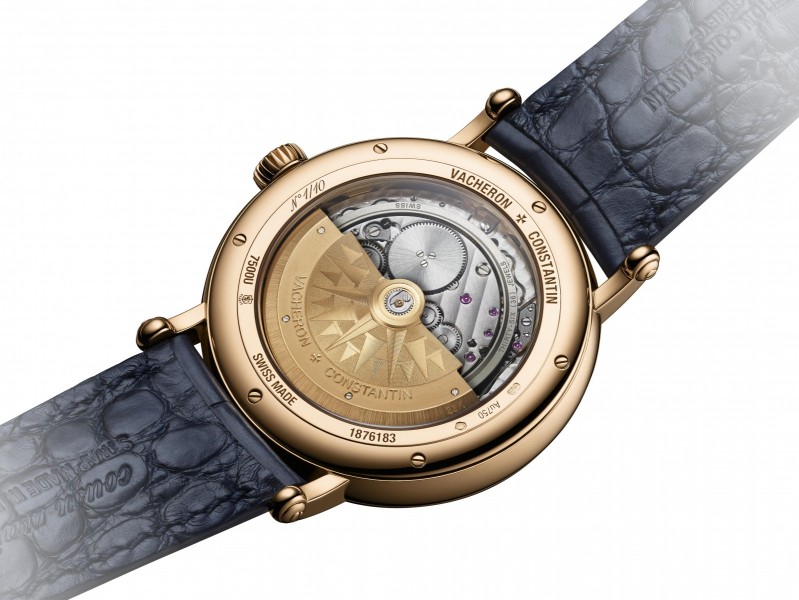 The automatic Calibre AT 1120 is visible through the open case back, with a 22 kt pink gold oscillating weight with a wind rose. Beating at 19,800 VPH, it has a power reserve of forty hours. The hours wheel is equipped with three arms each bearing four hours numerals, driven in turn by a cam-shaped like Vacheron’s emblem. This satellite module enables the hours to sweep across the dial along a 120° arc.

The new Metiers d’Art Tribute to Great Explorers are boutique-only models and have an RRP of AUD 188,000.

If you feel so inclined, you can buy a facsimile of the Miller Atlas to go with the watch. For those in Australia, you may be interested to know that the National Library has, in its holdings, number 672/ 987 of the facsimile edition produced by M. Moleiro Editor, S.A. (c2006).