Ressence has launched the latest addition to its Type 2 collection, which debuted in 2018 as a concept piece – the Type 2N ‘Night Blue’.

It is the third member of the Type 2 collection, following from ‘Grey’ and ‘Anthracite’. The 45mm sized case (thickness of 12mm) is polished grade 5 titanium, with a double domed sapphire crystal on both sides.

The dial is also grade 5 titanium and convex, with three bi-axial satellites inclined at 9.75° (hours) and 17° (seconds and e-Crown ® selector) on jewel micro-ball bearings. There are custom-made photovoltaic cells under 10 micro-shutters. All the indicators have Super-LumiNova.

Functionally, there’s the hours, minutes, and seconds, and those associated with the patented e-Crown® that is ‘the’ feature of the Type 2 – a second time zone, mechanical power saver, self-setting, and time monitoring. 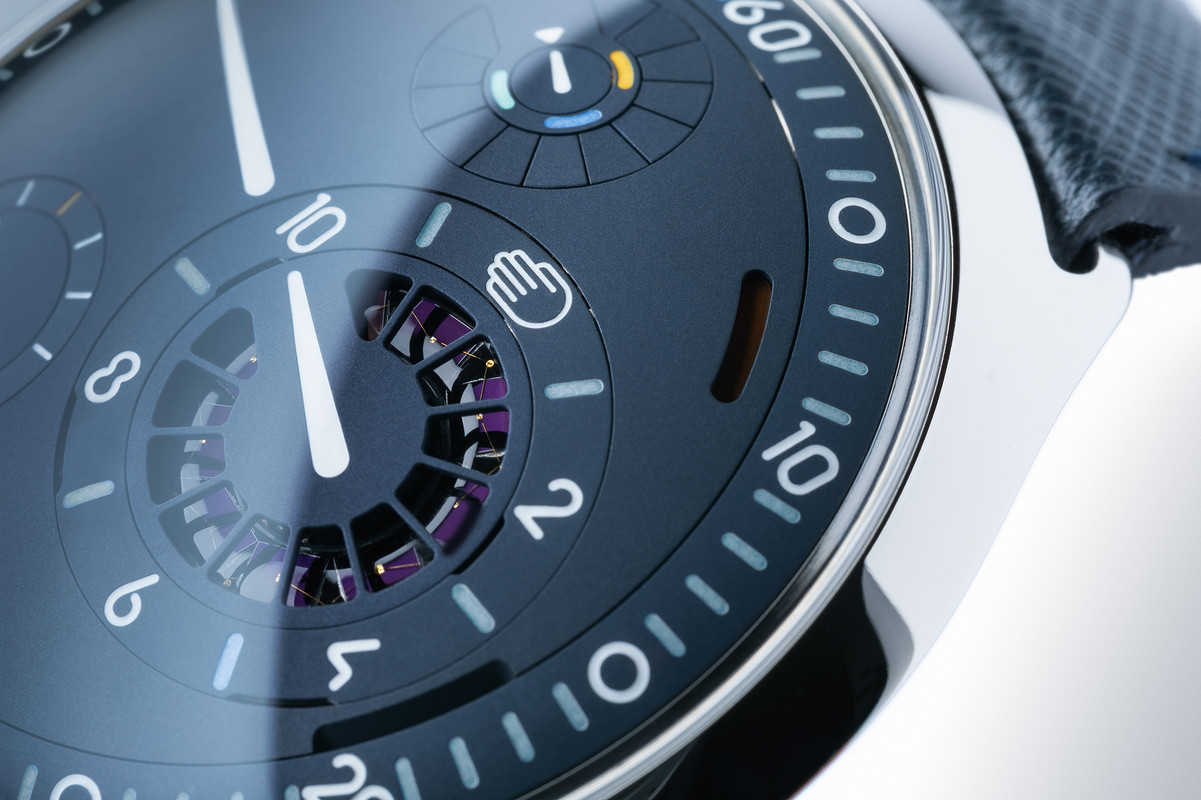 If you don’t know anything about the Type 2N and what the e-Crown® system is, in a nutshell, it is about integrating mechanical and electronic elements, and is powered by light, courtesy of the photovoltaic cells.

As is the case with all Ressence watches, the Type 2N has a lever set into the case back which is used to manually set the time. 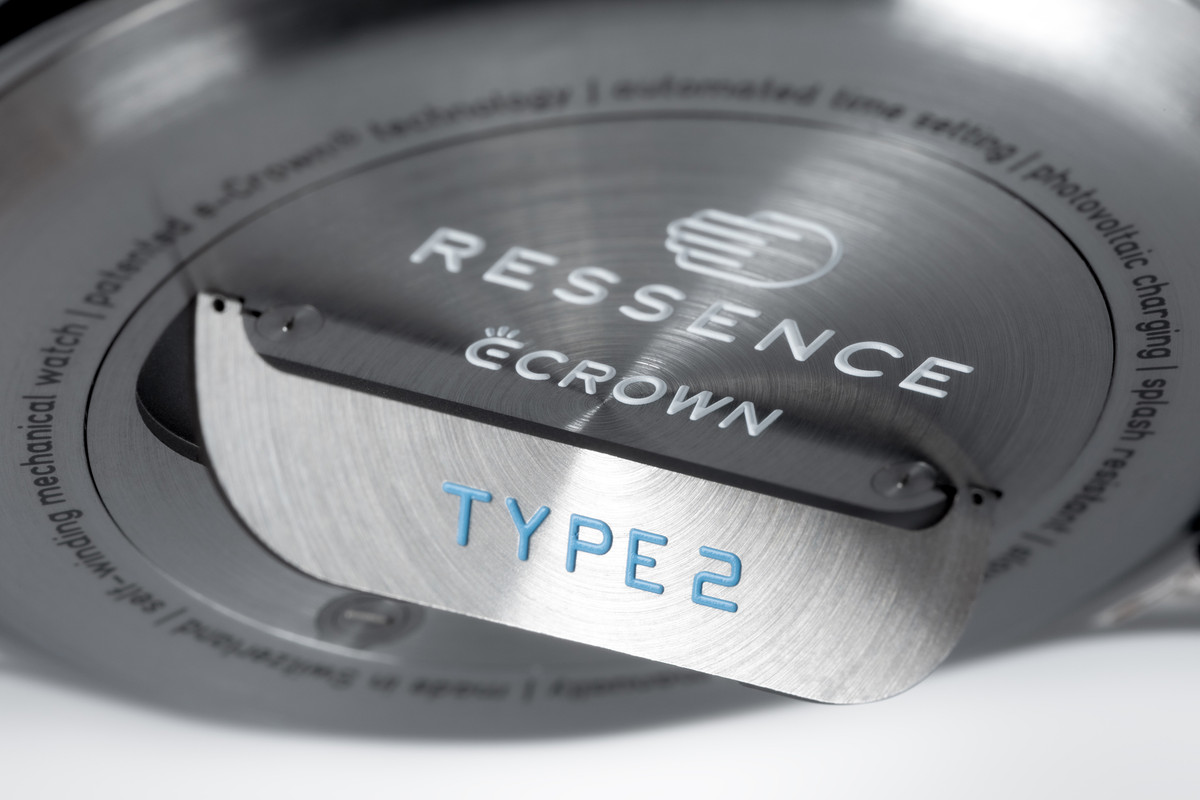 The e-Crown® is controlled and its modes accessed, via tapping the crystal, and indicated by a coloured sub dial – time zone 1: green; time zone 2: yellow; Bluetooth app communication: blue and off: white arrow. Once the time is set, it can be stored. If you put your watch aside, for however long, just do a double tap on the crystal and it will find the correct time again.

For those who haven’t read my earlier post about how the Type 2N operates, this final point is worth elaborating further.

It is a mechanical watch relying on two natural sources of energy : wrist movement and natural light. The automatic base movement with its rotor is as per usual, but added to it is the e-Crown®, powered by a kinetic generator and photovoltaic cells. The system is able to detect when the watch is no longer being worn, and will stop the movement (go into ‘sleep’ mode) before it exhausts its power reserve, ready to be re-started when you pick it up again.

The watch will always run on its mechanical base movement and, if necessary, photovoltaic energy. When required, the photovoltaic cells will use the outside light as an energy source; they open automatically when the energy balance is low, and can be controlled via a phone app.

The e-Crown® technology is discretionary and autonomous in its energy supply. It can be switched on/ off without affecting the watch, and does not interrupt the gear train from barrel to hands and you can use the watch purely mechanically.

The technology also allows for a second time zone to be stored, and is equipped with a Bluetooth module to allow control of the time via the app app.

What powers the mechanical part of this is the automatic ROCS 2 2892/A calibre, which beats at 28,800 VPH and has a power reserve of 36 hours. On the subject of power, the e-Crown® uses1.8 joules of energy per day. 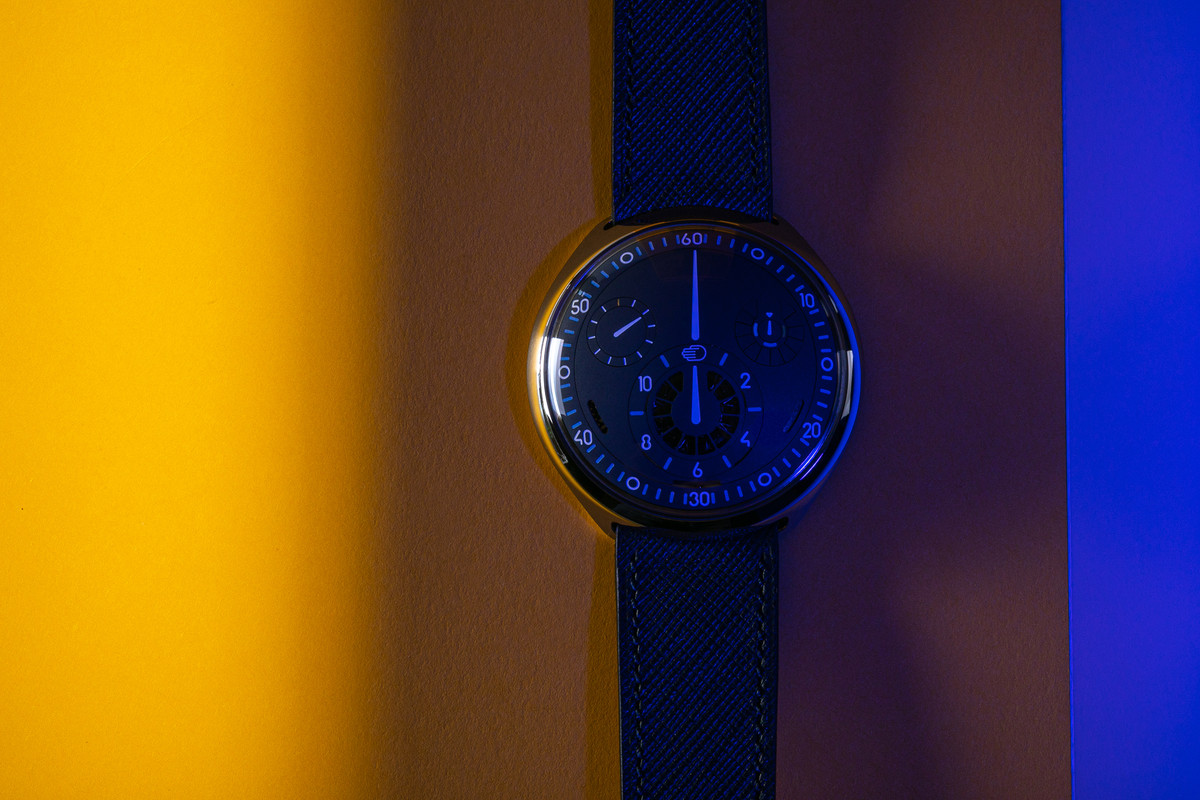 That such an intriguing boundary-pushing piece in a non-traditional watch design has made it from concept to a third iteration is of itself, I think, something of note. There are niche watches and within that, there are even smaller niches, and even with the ‘cool factor’ of the technology behind the Type 2N, it falls into that category.

Coming on a strap with an ardillon buckle, the combination of the deep blue and polished titanium case gives a quite different look compared to the other models. The RRP for the new Type 2N ‘Night Blue’ is CHF 44,500 (excluding taxes), which is the same price as the other Type 2N models.