You may remember the launch of the one-off Diabolus in Machina by Roger Dubuis last year. A mix of traditional complications in a thoroughly twentieth first century exterior, it featured a minute repeater with a flying tourbillon in a case made from a type of cobalt chrome called CarTech Micro Melt BioDur CCM (Cobalt Micro Melt).

You may also remember us mentioning that in spite of the price of USD 571,000, it had been sold.

Now, Roger Dubuis have announced two new variations of the Excalibur Diabolus in Machina, in rose gold, and in DLC-coated titanium.

Let’s just do a quick recap of the model and its functions. Alongside the time, minute repeater, and single flying tourbillon, there are also indicators for the function and the chime. For the repeater, you use a traditional pusher which has an “all or nothing” safety mechanism that only allows the repeater to be active if the pusher has been fully depressed, so as to to minimise accidental activation. There is a low tone for the hours, high for the minutes, and two tones for the quarter hours.

At 11 o’clock is a transparent disc (they call it the ‘Tone Playback Disc) hiding behind/ part of the Roman numeral. Marked with ‘Hours’, ‘Quarters’ and ‘Minutes’, it disc starts to turn as soon as the minute repeater is activated, visually indicating the time intervals being chimed. How did they do this? They attached it to the minute repeater’s main feeler-spindle system. 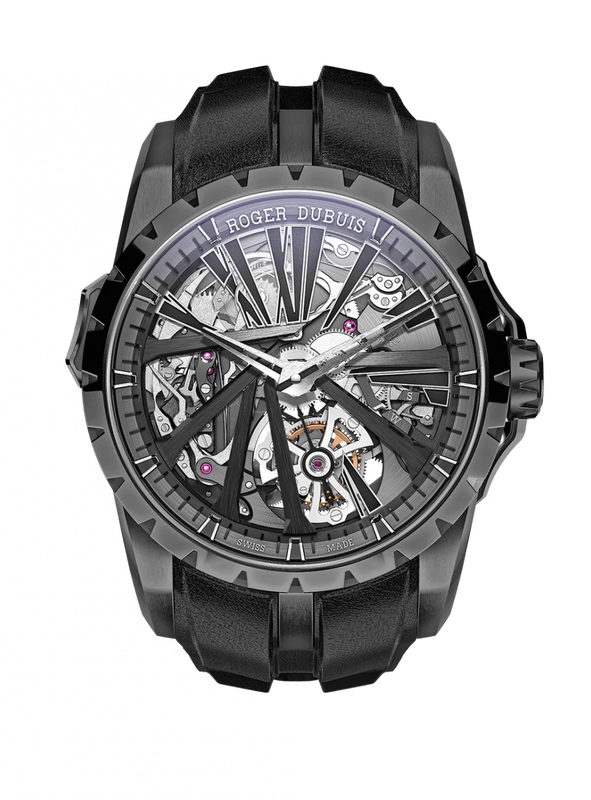 The second function indicator is a lever between 3 o’clock and 4 o’clock that lets the owner know if the watch is in ‘manual winding’ or ‘time setting’ mode so as to minimise damage to the movement.

These are all powered by the automatic Calibre RD0107, which beats at 21,600 VPH and has a power reserve of 60 hours.
Of course there’s also the model name to recall. For those who missed the first piece last year, Roger Dubuis chose to tune this minute repeater to the sound the famous discordant ‘Diabolus in musica’ Tritone chord that has been been popularised across a wide range of music. To read more about it and listen to some examples of how it has been used, go to this link. It is tuned in this timepiece to C and G flat. 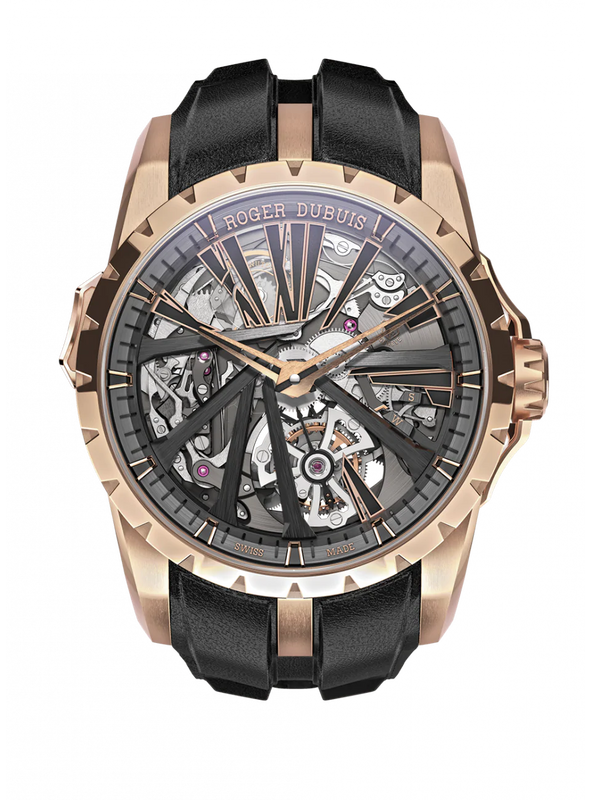 The new pink gold pièce unique is in a 45mm sized skeletonised case with the bezel and crown also in rose gold. The dial is grey with an engraved minute track, and polished pink gold-plated hour markers filled with SLN. It comes on a calf leather strap with a titanium triple-folding buckle. Water resistance is 30m.

The second new pièce unique, in black DLC-coated titanium is also in a 45mm sized case, with bezel and crown in the same material. Its dial is black and the polished rhodium-plated markers are also filled with SLN. Its strap is also calf, but its buckle is DLC-coated titanium. For this model, water resistance is 100m.

If like me you had thought that the inaugural model would be a one-off in any variant, well we were proven wrong. The prices? For the rose gold EUR 586,000 and for the DLC titainium, EUR 584,000.