Early this year MB&F released an 18k yellow gold variant of their Legacy Machine (LM) Perpetual, a watch originally launched in 2015 in two editions of twenty-five pieces each in 18k 5N+ red gold and Platinum 950 but which expanded to include limited editions in white gold and titanium.

Now, there is another new addition to the Perpetual family – the LM Perpetual EVO.

For those unfamiliar with it, the LM Perpetual is a perpetual calendar featuring a manually-wound movement with a patented ‘mechanical processor’ created by watchmaker Stephen McDonnell. Rather than having a module and base movement, the Legacy Machine’s perpetual calendar consists of a 581 part integrated movement that was designed to be foolproof in terms of date adjustments via the pushers which automatically deactivate when the calendar changes, to avoid accidents.

Whereas the standard perpetual calendar is designed for 31 day months, fast forwarding past redundant dates during the monthly changeover, McDonnell’s design skips past the extra days via a date lever, which starts ‘reading’ the days in the relevant month when it hits day 25. The ‘mechanical processor’ utilises a default 28 day month and adds extra days when required. The Legacy Machine Perpetual also has a quick set pusher to adjust for leap years. This movement beats at 18,00VPH and has a power reserve of three days.

The instantly recognisable MB&F Legacy Machine balance wheel flies over the movement. From the time at 12 o’clock we have the day of the week at 3 o’clock, power reserve indicator between 4 and 5 o’clock, month at 6 o’clock, retrograde leap year indicator between 7 and 8 o’clock, and the date at 9 o’clock. 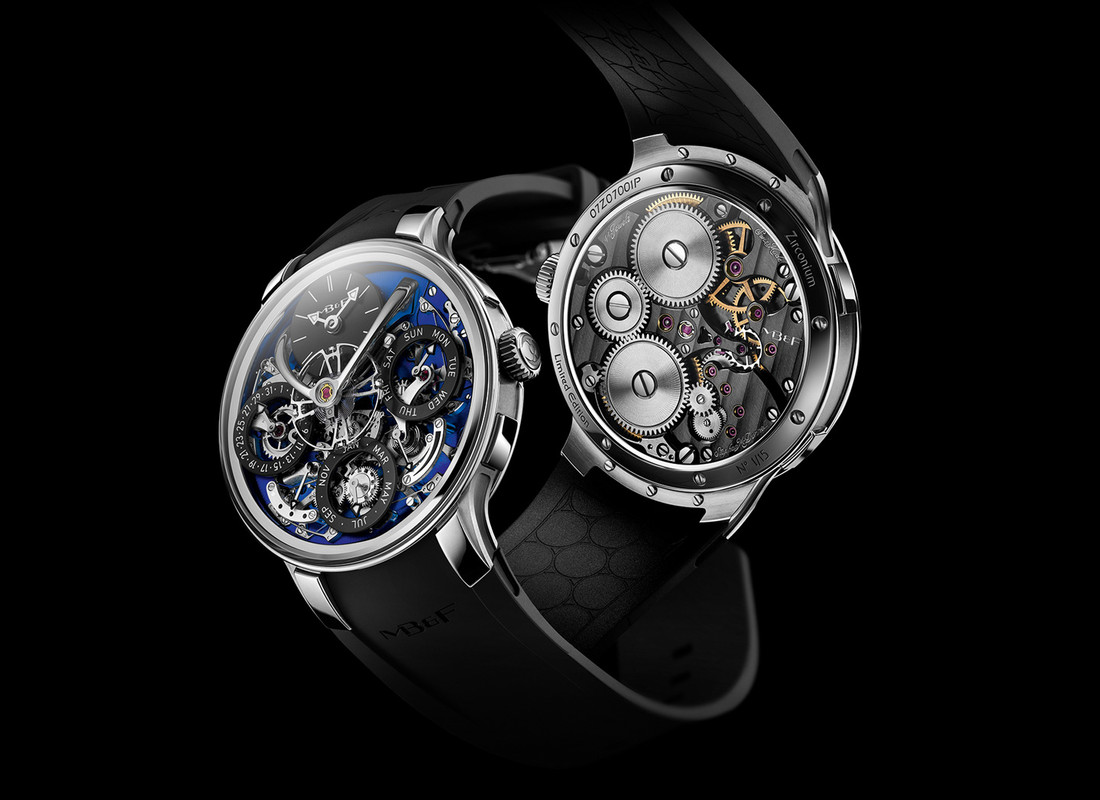 So what is different about the new EVO? Perhaps some clues are in the name.

The case is still 44mm and 7.15mm thick, but it is now in Zirconium and has been tweaked to make it sleeker (most noticeably through there no longer being a bezel but with the domed sapphire crystal attached directly to the case) and more ‘sporty’, insomuch as the LM Perpetual can be as such. Other changes such as newly designed correctors which are no longer a traditional round shape but large and flat double-sprung actuators, and the use of an integrated rubber strap with a titanium buckle, reinforces this. 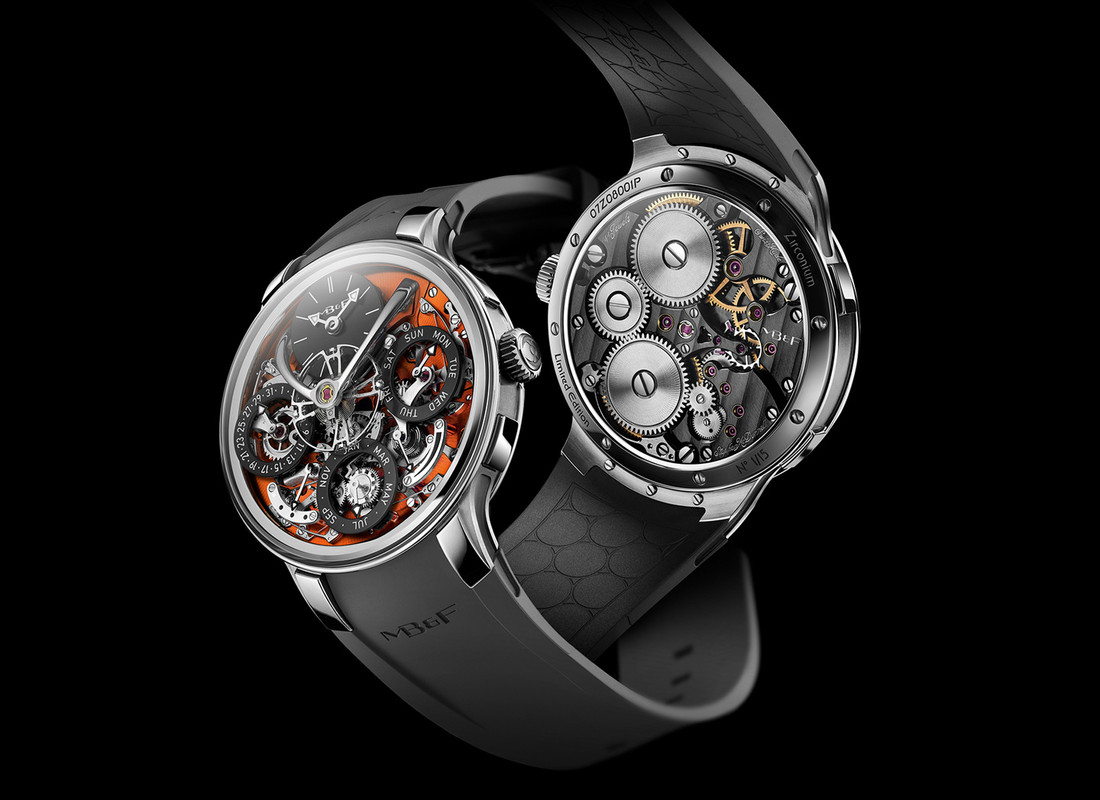 There is also, of course, the rather obvious change of three very bright dial plates in either black, blue, or orange that are PVD (black) or CVD (blue, orange) coated. The key difference between Physical and Chemical Vapor Deposition is that the coating material in PVD is in solid form whereas in CVD it is in gaseous form. 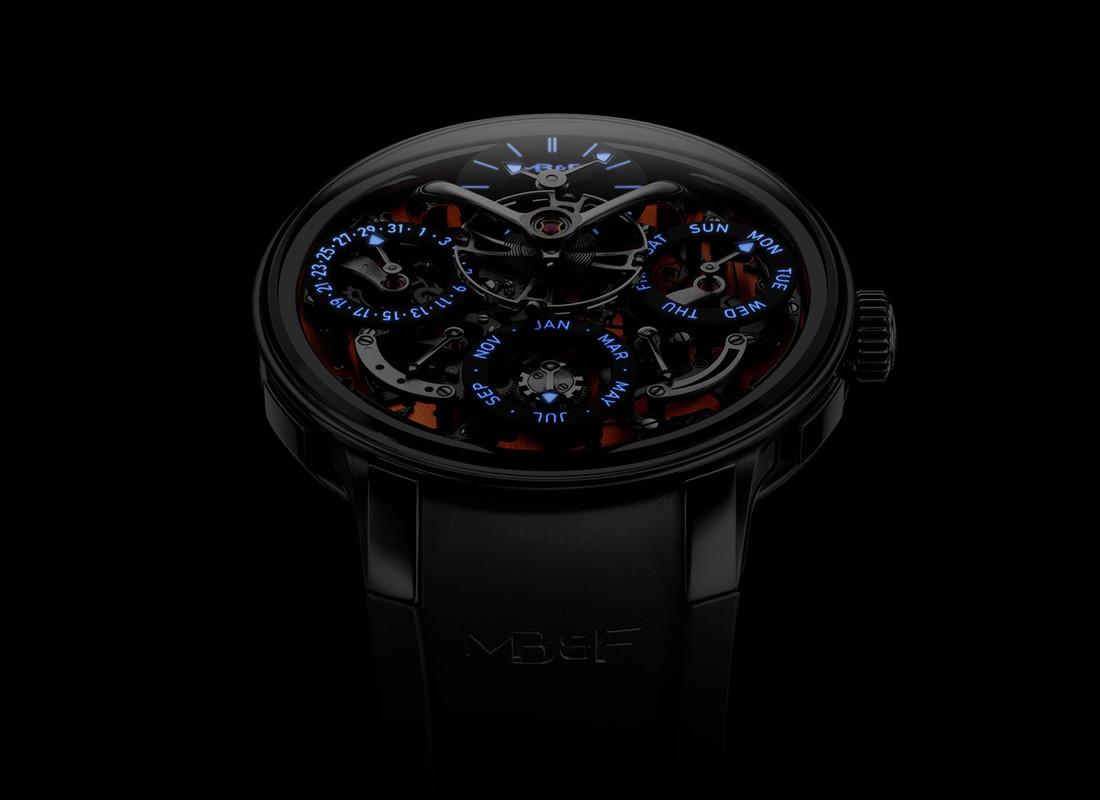 Less immediately obvious changes and features in the new EVO are the use of a lot of Super-LumiNova on the time and calendar indications, a newly-developed monobloc shock absorption ‘FlexRing’ dampening system, a screw-down crown, and water resistance to 80m. It may have started off five years ago as in many ways a quintessentially classical perpetual, but with changes of case material, some design features and the rubber strap, this is pretty much as close to it being a ‘casual’ version of the LM Perpetual as can be achieved. 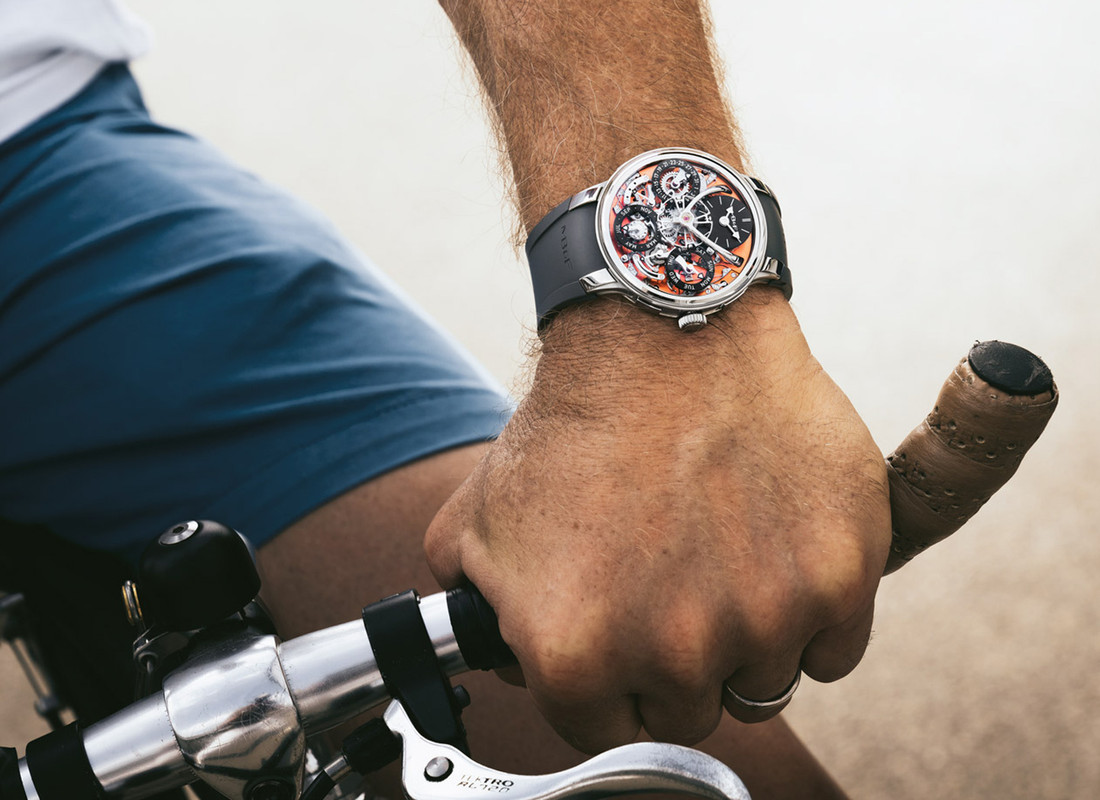 The new LM Perpetual EVO is available in three variants (blue, black or orange) of fifteen pieces each, with an RRP of CHF 164,000. As not all authorised dealers are open (nor accessible) at present, for those interested, they can be purchased directly from MB&F with free worldwide shipping via the MAD Gallery.