In 2017 HYT launched the H4 Neo, a manually-wound watch with a light source (module) that could be activated on demand. A LED-lit version of the H4, it was an unexpected diversion for a brand known for its fluid timekeeping. Under the dome at 6 o’clock were concealed two purple LEDs. Once activated, the dial would light up. At night, the coloured fluid and the transparent composite dial would light up. There was a pusher at 4:30 which, when depressed, would activate the micro generator and the LEDs.

Now, the new FLOW is the follow up to this, and with the same concept.

There are two new FLOWs, and they are both limited editions in a 51mm steel case with two crowns. The one at 2 o’clock is for setting the time and winding the movement. The pusher at 4 o’clock is used to illuminate in the same fashion as the earlier watch – it activates their proprietary complication of a micro generator that releases the energy stored in a barrel to power the LEDs (eight or thirteen depending on which model). The light is activated by pressing the push-button crown lasting 2 seconds of illumination per single push. The light can be activated up to 4 times before having to rewind the crown. The light can be kept on for eight seconds is the pusher remains continuously pressed. 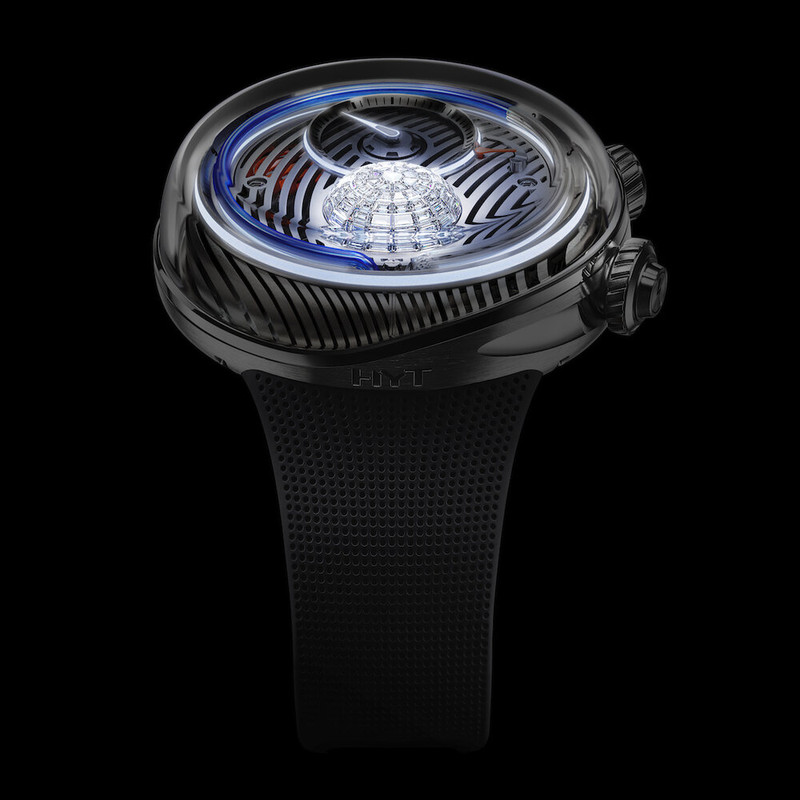 The more extravagant model is has, unusually for the brand, a lot of diamonds – a dome of 73 baguette-cut 1.7-carat diamonds, to be precise. They light up when the thirteen LEDs below it are illuminated. 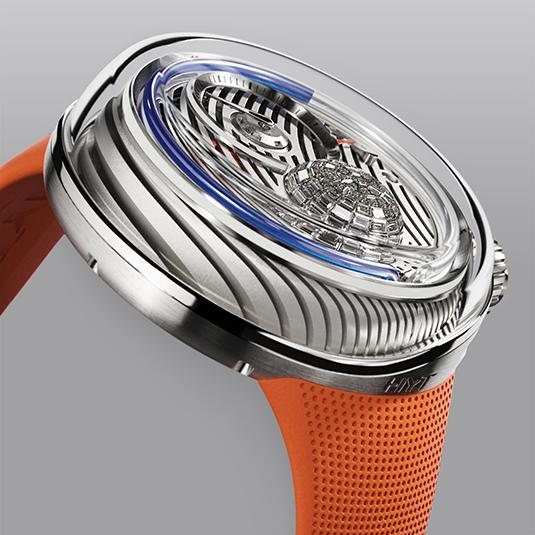 The second model is called the ‘Vortex’. Here the way the watch plays with light is different, and not just because of the absence of precious stone. The case is opened up, allowing the light from the eight LEDs to be seen.

In terms of more general features for both pieces, there is a ring of Super-LumiNova, polished contrasts on the circular-brushed cases, opaline-finished grey dials, which are a piece of metal that has been cut both to enhance the illumination and to give a ‘wave’ effect. 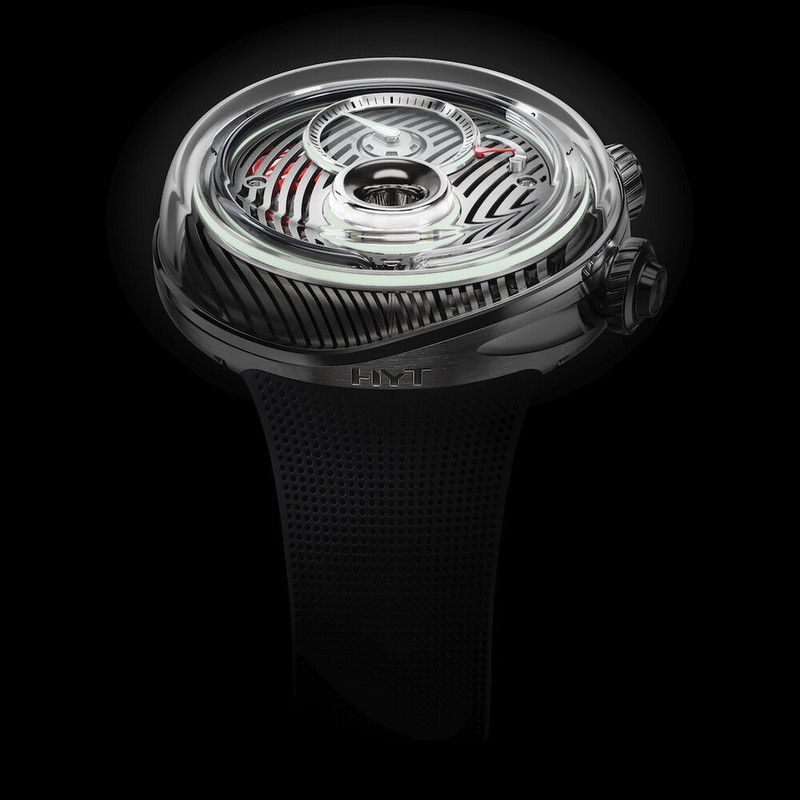 Both watches feature, of course, the core of HYT’s watches, the fluid time indication, wherein the coloured liquid in the capillary indicates time passed and its border with the translucent liquid, the current time. The movement behind this is visible through the open case back, beats at 28,800 VPH and has a power reserve of sixty-five hours. 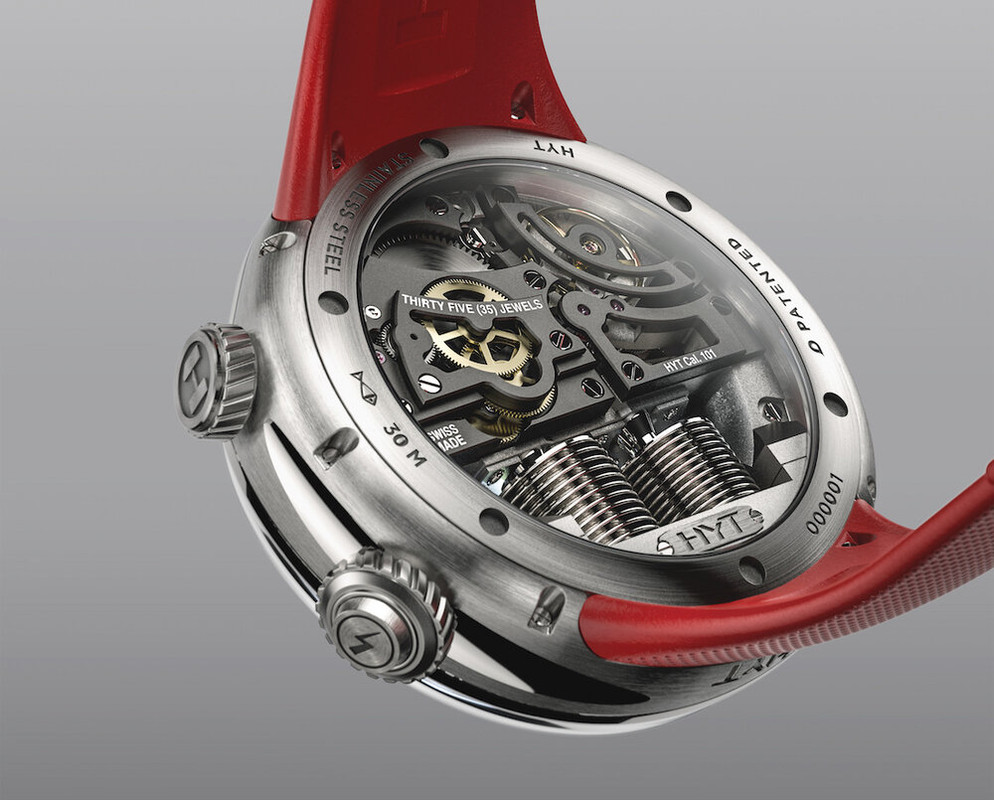 The cases are 51mm with a thickness of 20.6mm and water resistant to 30m. Coming on rubber straps (blue, black, or orange) with a titanium folding buckle, the HYT FLOW has RRPs of for CHF 79,000 (Vortex) and CHF 149,000 (diamond dome). They are both limited to twenty-five pieces each.

This is not the first ‘light on demand’ piece that we’ve covered. Some of you may recall Van Cleef & Arpels’ use of piezoelectricity and the DB28GS Grand Bleu Diver by De Bethune.