In recent years Oris has partnered with a number of environment-related organisations, creating limited editions of their Aquis divers watch to mark these relationships. In 2020, the first was the Lake Baikal, based on the 43.5mm Aquis Date and with a pale blue dial and case back featuring an inlay representing its frozen state in winter. The second was two Carysfort Reed limited editions in stainless steel or yellow gold. Based on the Aquis GMT Date, they have a deep blue dial, orange accents, and a two-tone black and blue bezel inlay. on an orange rubber strap.

Now, in partnership with the Korean Federation for Environmental Movements (KFEM), a third limited edition has been launched for 2020, this time dedicated to the Han River (Hangang/ 한강) in South Korea. 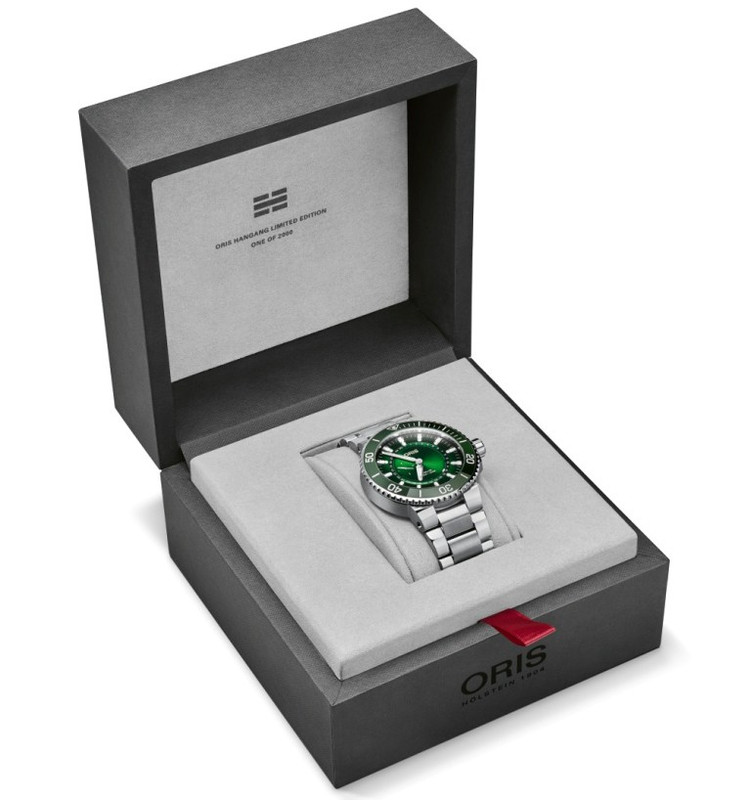 One of the country’s major rivers and the lifeblood of its capital, the Hangang is the convergence of smaller rivers in the areas of Gangwon-do, Chungcheongbuk-do, and Gyeonggi-do, flowing through Seoul and supplying its citizens with water. Once an important trade and strategic route, its estuary’s status at the North Korean border means that its use is now more limited in function than in times past. In spite of its national importance, its water quality has waxed and waned, often diminished by periods of neglect and pollution, and even including the dumping, by the United States military, of toxic chemicals back in 2000.

Attempts to clean it up go back to the 1980s, when after a period during which it was so polluted by industry and sewage that fish and bird life had all but disappeared, a five year project cleared it up in time for the 1988 Summer Olympics. New sewerage treatment plants, reclaimed land, and creation of business and recreational areas transformed both its water and much of its banks, with wildlife returning.

Nonetheless, in the years since then, the health of the Hangang and its tributaries has fluctuated, and even though water quality has undoubtedly improved, work remains to be done, with pollutant levels in the river still too high.

The KFEM, South Korea’s largest environmental NGO, has intiatied a project to clean up the Hangang and restore the river’s health. Oris’ new partnership with them forms a part of the brand’s water-focused ‘Change for the Better’ campaign. As part of the new partnership, Oris will be supporting a series of clean-up days Seoul KFEM (much like the Clean Up Australia days). During these, hundreds of local volunteers will clear the river’s banks of litter, plastic, and other pollutants, and there will be an accompanying campaign about the importance of keeping the Hangang clean. 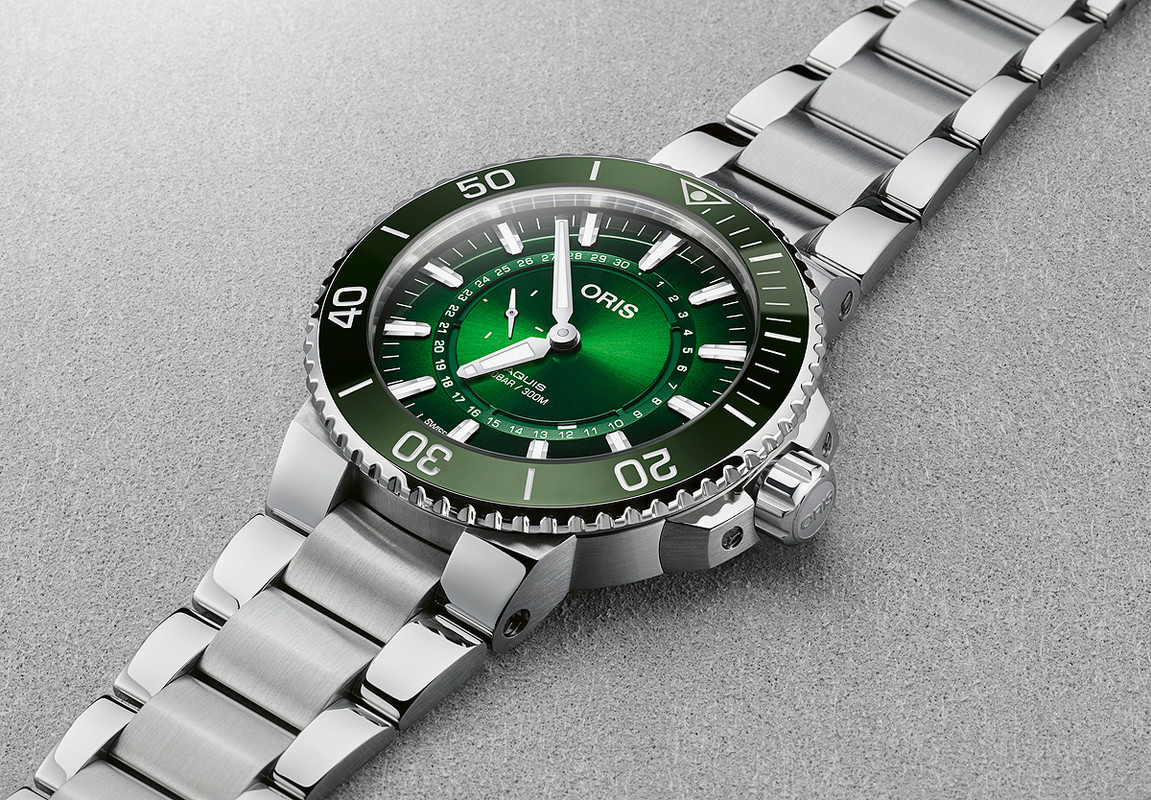 The new Aquis Hangang is in a limitation of 2,000 pieces. In keeping with the other pieces in this sub-collection, it is in a 43.5mm stainless steel case with a water resistance of 300m. The crown is screw-in and secure for the water resistance levels. The dial is green (yes, another example of this trend) with a sunburst effect. The unidirectional diving bezel has a matching green ceramic insert. The choice of dial colour was based on the creek beds at the Hangang’s source.

Functionally, along with the time, there is a running seconds at 9 o’clock, and a 31-day date inner ring with a white indicator. The hands and indices have Super-LumiNova. 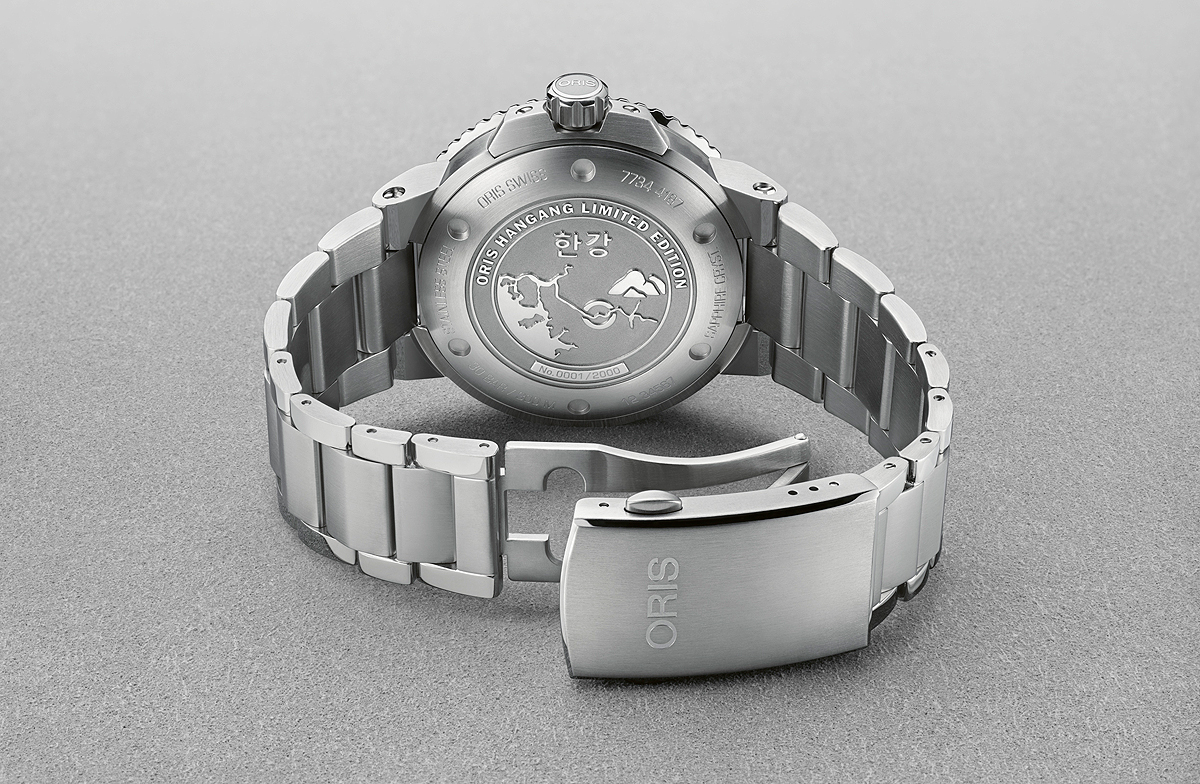 On the case back is an engraving of a map of the Hangang’s path across Korea, and the limitation number. Underneath it is the automatic Oris Calibre 743 (base Sellita SW 220-1) which beats at 28,800 VPH and has a power reserve of 38 hours.

Coming on a stainless steel bracelet with a folding clasp with an extension facility, the new Oris Hangang LE is available as of this month with an RRP of AUD 3,700/ CHF 2,500/ EUR 2,400.

On a local note, those in Australia may recall that Oris has partnered with the Australian Marine Conservation Society (AMCS), with part of the proceeds from those limited editions having gone towards the work of the AMCS in protection and conservation of the Great Barrier Reef.