Although there is no explicit marketing of them as such, MB&F’s watches have very much been dominated by men when it comes to ownership, although they can happily reside on wrists of types. Nonetheless, 2019 has seen the brand introduce their first ever timepiece specifically for women, the Legacy Machine FlyingT.

A completely new watch in form, the 38.5mm white gold case is not just smaller but the lugs are consequently more slim, the watch’s lines curved, and the sapphire crystal dome more highly convex. The case has two crowns, one for winding and the other for setting the time. 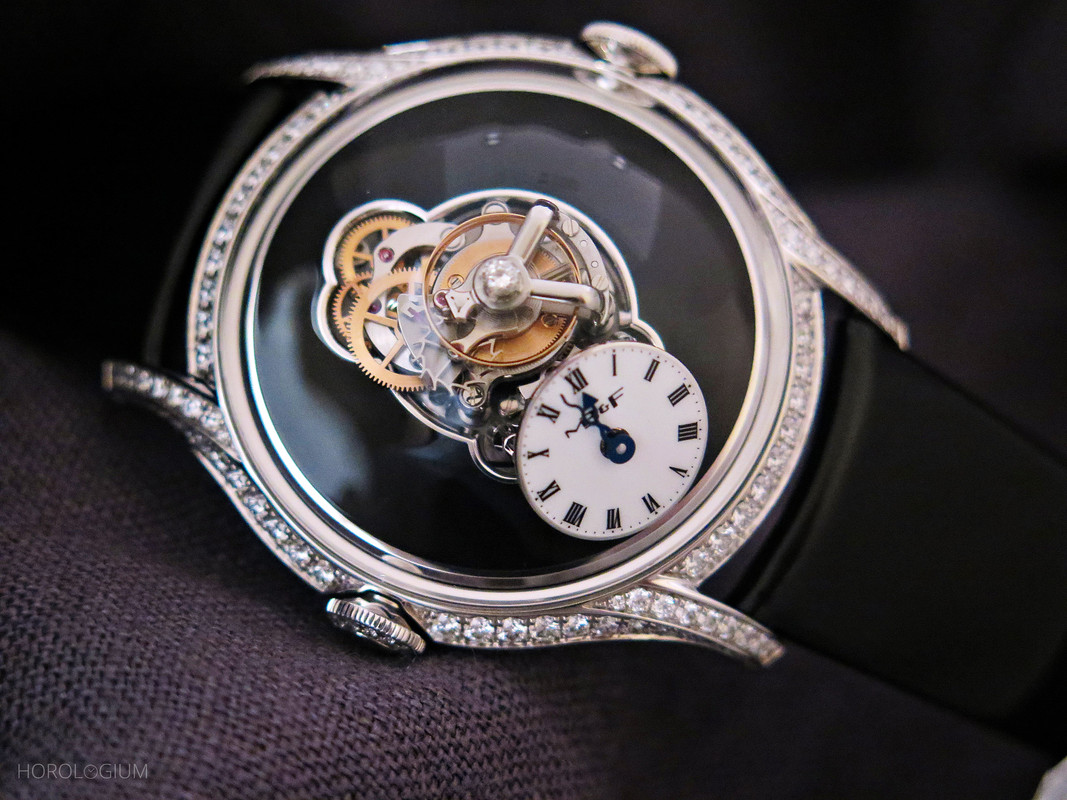 Beneath dome there is a slightly curved dial which in this version, has up to eight layers of black lacquer. From the center of the dial side, anchored only at its base to the dial, rises a vertical mechanical movement topped by a 60-second flying tourbillon (hence the model name) with a cantilevered double arch upper bridge instead of the brand’s typical battle-axe bridge. A diamond tops the tourbillon’s cage. A challenge that arose during the movement’s development related to balance – the shape of the upper tourbillon cage creates more mass on one side of the tourbillon than the other. To compensate and support, a counterweight is hidden under the tourbillon carriage, on the opposite side of the upper tourbillon cage.

At the 7 o’clock is a white lacquer dial displaying the hours and minutes with blued serpent-like hands. The dial is inclined at a 50° to face the wearer. The dial is quintessentially Legacy Machine and in many ways so is the watch, the use of so many diamonds being the noticeable departure. 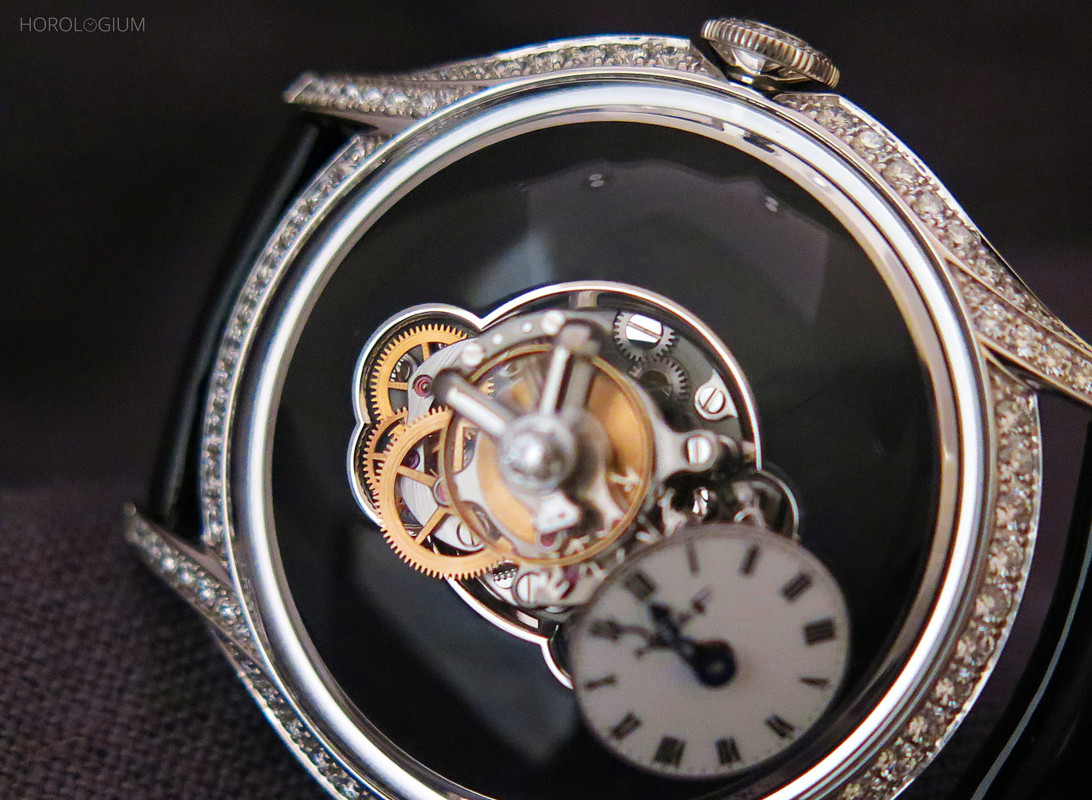 When it was launched, a thought did cross my mind about this. In and of itself, without the stones, it would be a fitting expansion of the Legacy Machine line; is it necessary to put stones on a women’s watch? Now having handled it I understand a bit more from an overall aesthetics point of view why it was done; a plain bezel and lugs may have been well, a little too plain given the expanse of the black lacquered surface. Engraving might have been too big a divergence from the Legacy Machine design codes. Of course there’s also the real possibility that a diamond-set MB&F has been a repeated customer request.

Two things did surprise me about the piece ‘in the metal’. Knowing that the domed sapphire crystal is high (and why it is so) is one thing, but seeing it is another. It really is quite a remarkable height. Secondly, and this was the more unexpected of the two, the watch is a very wearable 38.5mm size, and one knows that the hours and minutes dial is small, but it is smaller than I had thought in my head, it was. Bearing in mind the core inspiration of the Legacy Machine series, the FlyingT’s time keeping dial’s size is closer to the watch faces of vintage women’s watches rather than contemporary ones. 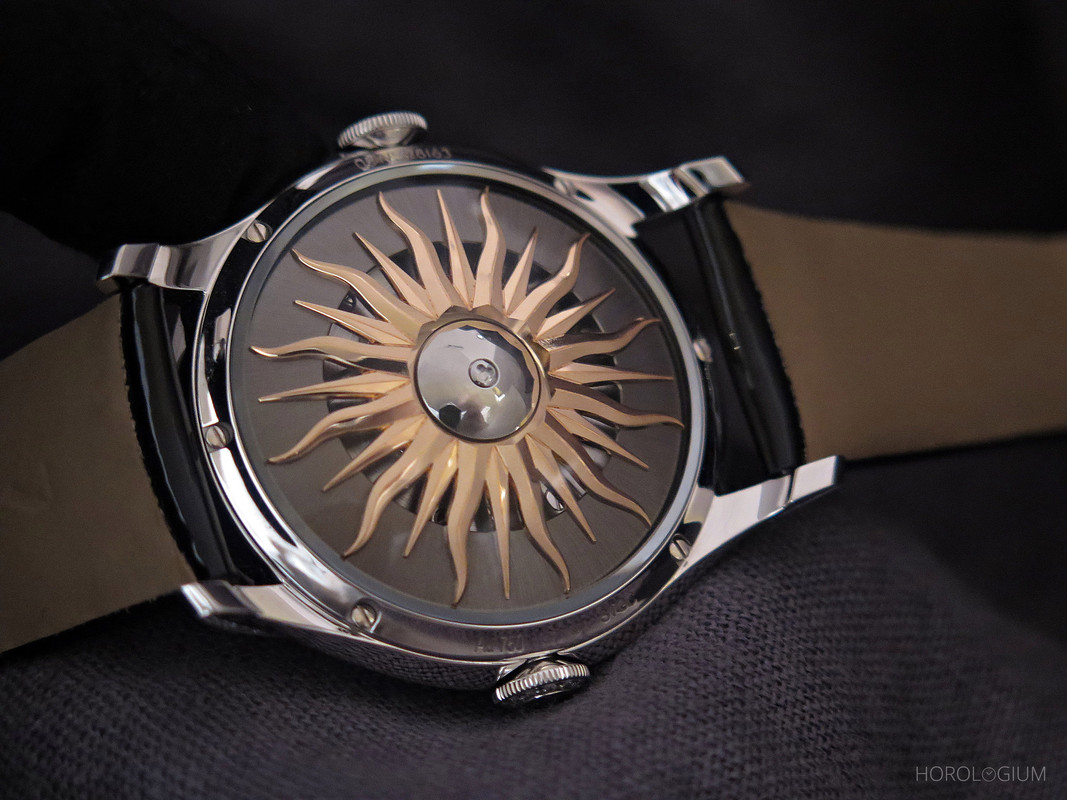 On the back you can see the rotor of the movement in the shape of a three-dimensional red gold sun with sculpted rays. This new in-house automatic movement beats at 18,00VPH and has a power reserve of 100 hours.

The ‘base’ FlyingT Black Lacquer model shown here is in 18k white gold with a diamond-set case, and has an RRP of CHF 116,000. The FlyingT Pavée which also in an 18k white gold case but has a brilliant-cut diamond-set dial plate is CHF 146,000, and the FlyingT Baguette in the same case and dial plate fully set with baguette diamonds is CHF 320,000. All prices include tax.

[My thanks to The Hour Glass Australia (an authorised dealer for MB&F), at which I took these photos during the GPHG 2019 travelling exhibition]