Jaquet Droz has just announced some new additions to its Grande Seconde collection in the form of new monopusher chronographs. One of these is a limited edition model to mark the occasion; the remaining three launch models are slightly different and will be added to the permanent collection.

The top of the recognisable Droz figure eight design is the time function, with Roman numerals for hours and minutes. The lower circle is where the chronograph functionality is featured, with the timing for the 30-minute counter in Arabic numerals. There is also a date ring feature here. The chronograph function has, visually, been seamlessly incorporated into the ‘8’ design.

These are Jaquet Droz’s first monopushers, which meant that a new in-house movement had to be developed to fit the design codes of the Grande Seconde collection. The result is the automatic Calibre 26M5R column-wheel chronograph with a deadbeat seconds, beating at 21,600VPH with an 18 carat red gold oscillating weight, and with a forty hour power reserve. 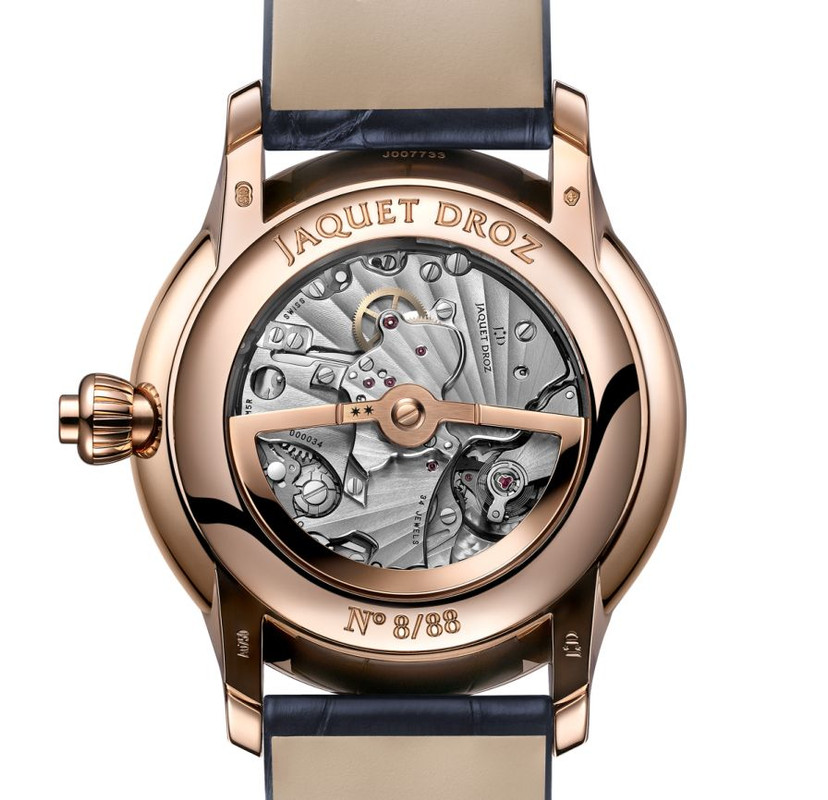 The limited edition model shown at the outset is called the Grande Seconde Chronograph Enamel. There will be eighty-eight numbered pieces in a 43mm sized red gold case with a grand feu enamel dial (a nod to their pocket watch history), and petit feu Arabic and Roman numerals. ‘Petit feu’, or ‘small fire’, can refer either to the firing and glazing of enamel in a low temperature muffle kiln at 700 to 900 degrees, or the category of colours that can be achieved when firing within this temperature range.

The three new regular production models come in a 43mm stainless steel case with a dry sand-blasted dial in silver, blue, or taupe gray. The most obvious difference compared to the limited edition chronograph, and referencing another Jaquet Droz style, is that they have an off centre figure ‘8’ for the two time displays. In line with this change, the crown is now at 4 o’clock. 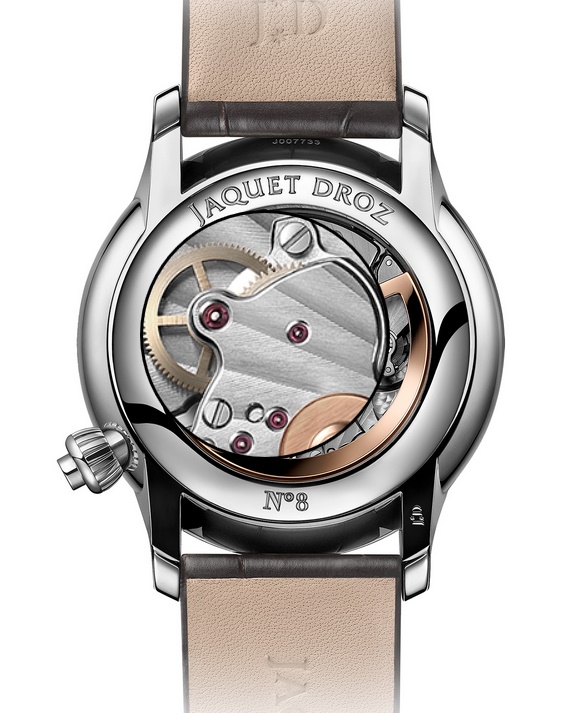 Both the limited edition version and the regular production models come on alligator straps in either dark blue or dark brown, with a folding clasp. The non limited stainless steel models will have an RRP of 20,000 CHF.