There are a number of fifty year commemorations this year in the watch world, but one perhaps looms largest because it is irrevocably linked to something that is part of the global memory – the Apollo 11 moon landing of July 21, 1969. As is the case in this era, it also has its own hashtag, #moonwatch, so there’s also that.

To commemorate Omega’s longstanding relationship with this historic event, the brand has just launched a new model that comes in limited edition of 6,969 pieces.

Although there have been variants that have been more materially and aesthetically adventurous than others, the classic Speedmaster design which has been an integral part of its enduring popularity and success for Omega is present here.

Coming in a 42mm stainless steel case (the familiar), the bezel is polished ZrO2 black ceramic with an Omega Ceragold™ tachymeter scale (the new). As well as the new material for the bezel, the indices, logo and almost all of the hands (the central seconds hands being the exception) on the varnished grey and black dial are in 18 carat Moonshine™ Gold, a new patent-pending alloy that we can expect to see more of in the future. The central chronograph seconds hand is in PVD-coated Moonshine™ Gold. 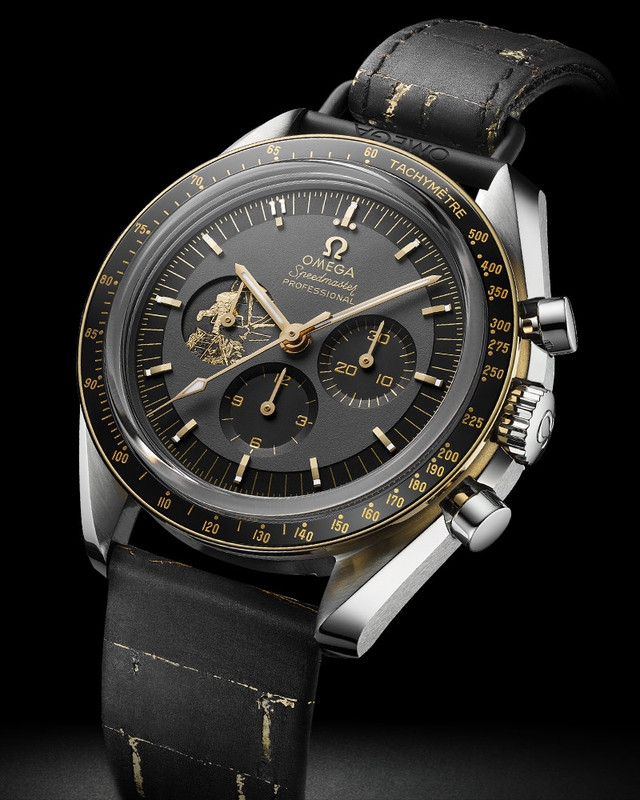 The mission references on the dial extend to the 11 o’clock marker, which has been changed to ’11’, and there is also a commemorative 9 o’clock sub-dial in Moonshine™ Gold which consists of a blackened and laser-engraved image of Buzz Aldrin climbing onto the lunar surface. 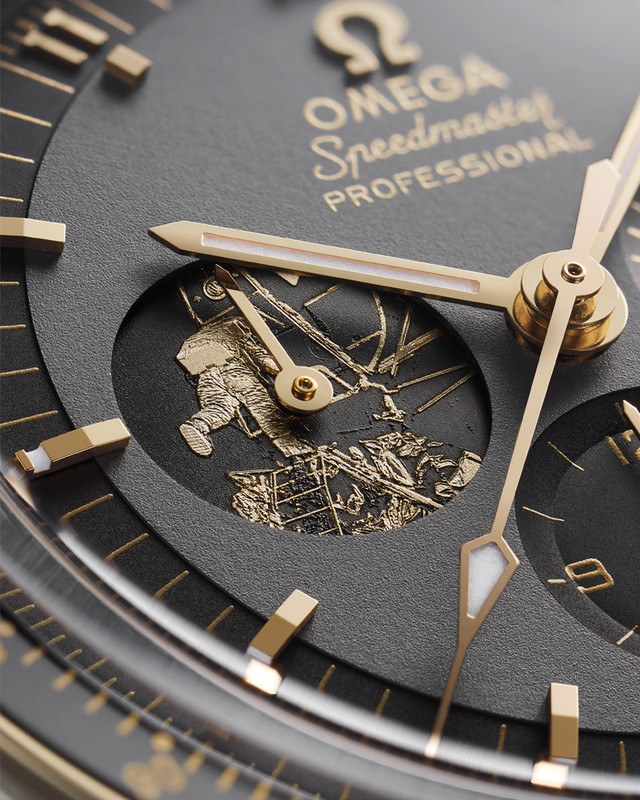 The case back is bedecked with commemorative engraving under the sapphire crystal. The blackened inner case back section has an engraved astronaut footprint on the lunar surface, and Neil Armstrong’s well known quote appears in 18 carat Moonshine™ Gold-plated lettering. 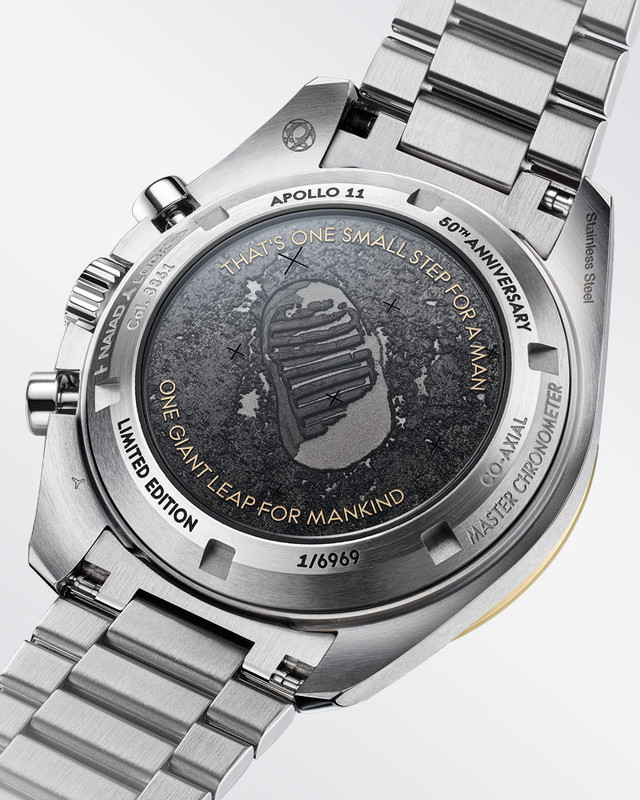 Underneath the decorated case back is the new Master Co-Axial Calibre 3861 (the Calibre 1861 with co-axial), which is of course chronometer certified. 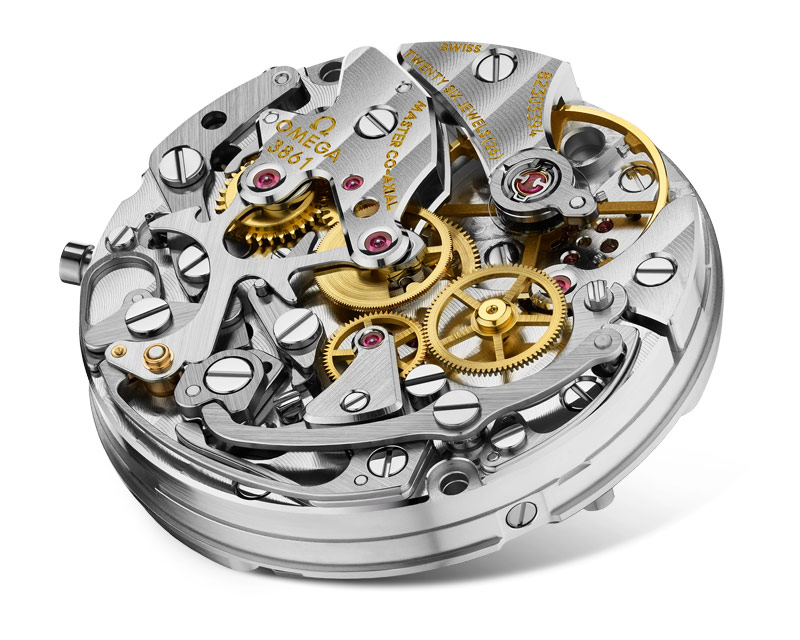 Presentation boxes have become (literally and figuratively) a huge thing with special Speedmasters, and it continues here. The box including two mission patches (50th anniversary/ Apollo 11), two engraved plates (landing site co-ordinates/ landing site and time), display stand of a lunar module, and a strap changing tool for the additional Velcro® strap in blackened cork with golden marks. The design influence for this was the Apollo-era ‘boost protective cover’ a fibreglass structure covered with cork which protected the crew from intense heat during launch. Th watch comes on a fourth generation Speedmaster (ST 105.012-65)-inspired polished-brushed metallic bracelet with a vintage Ω on the clasp. 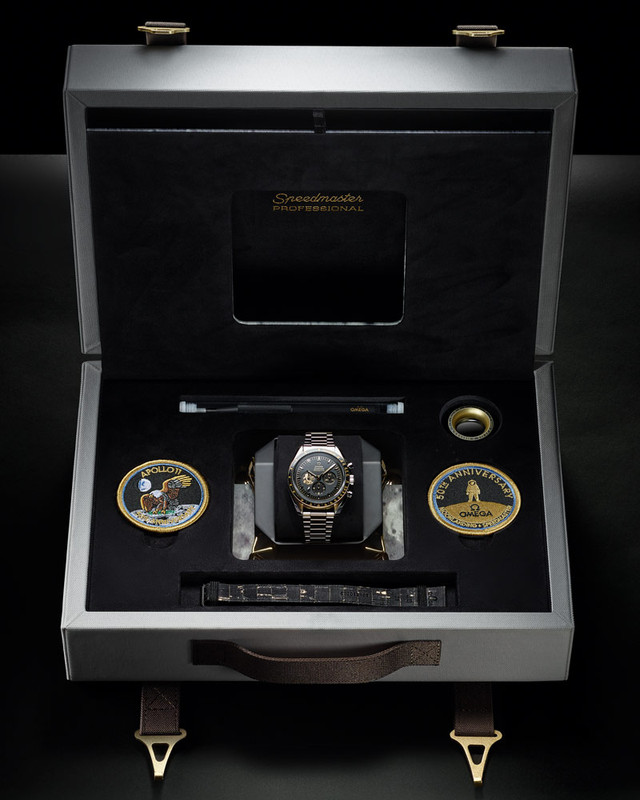 With a price of EUR 9,000 (incl. taxes), this is the watch that Speedmaster fans and watch people alike have been waiting for with great curiosity since last year. To the extent that there were people who had put their names down for this watch before having seen it. However, as we have noted in the cases of the Speedy Tuesday I and II ‘Ultraman’ models, some limited edition Speedys have found themselves on the secondary market before deliveries have even been fulfilled, so it remains to be seen if this new piece also follows this pattern.