This year, Armin Strom has taken their ‘Mirrored Force Resonance’ technology and created a second movement presented in a new watch collection called ‘Pure Resonance’. Earlier this year we had the opportunity to see the ‘Fire’ and ‘Water’ Pure Resonance models.

The aim of these timepieces is to be technically interesting, in a modern and interesting fashion. The focus, as the name indicates, on the dual balances of the resonance; on showing off what Armin Strom can do.

For a quick summary of what resonance is, go to an earlier post of mine at this link, but it is about the watch’s regulation system. As I mention in that post, resonance occurs when two suspended pendulums of the same frequency swing in the same plane i.e. when the two oscillators are beating in sync and find a rhythm. A mechanical system exhibits its greatest amplitude when coupled oscillators are tuned at the same frequency. In theory, this provides for much greater stability of rate because the two independent mirrored regulating systems balance each other out.

As I also mentioned in that post to which I refer above, watches that feature this are few and far between. They are a cool thing, but they are also probably a niche interest even amongst those who love watches.

Powering the Pure Resonance is the manual wind Caliber ARF16 which, like the Calibre ARF15, features the visible resonance clutch spring in between the two oscillators between 8 and 10 o’clock. It beats at an unusual 25,200VPH (3.5Hz). The movement (measuring 34.40mm x 7.05mm) has a power reserve of 48 hours and is comprised of 206 components including 38 jewels. Bridges are decorated with straight Côtes de Genève. 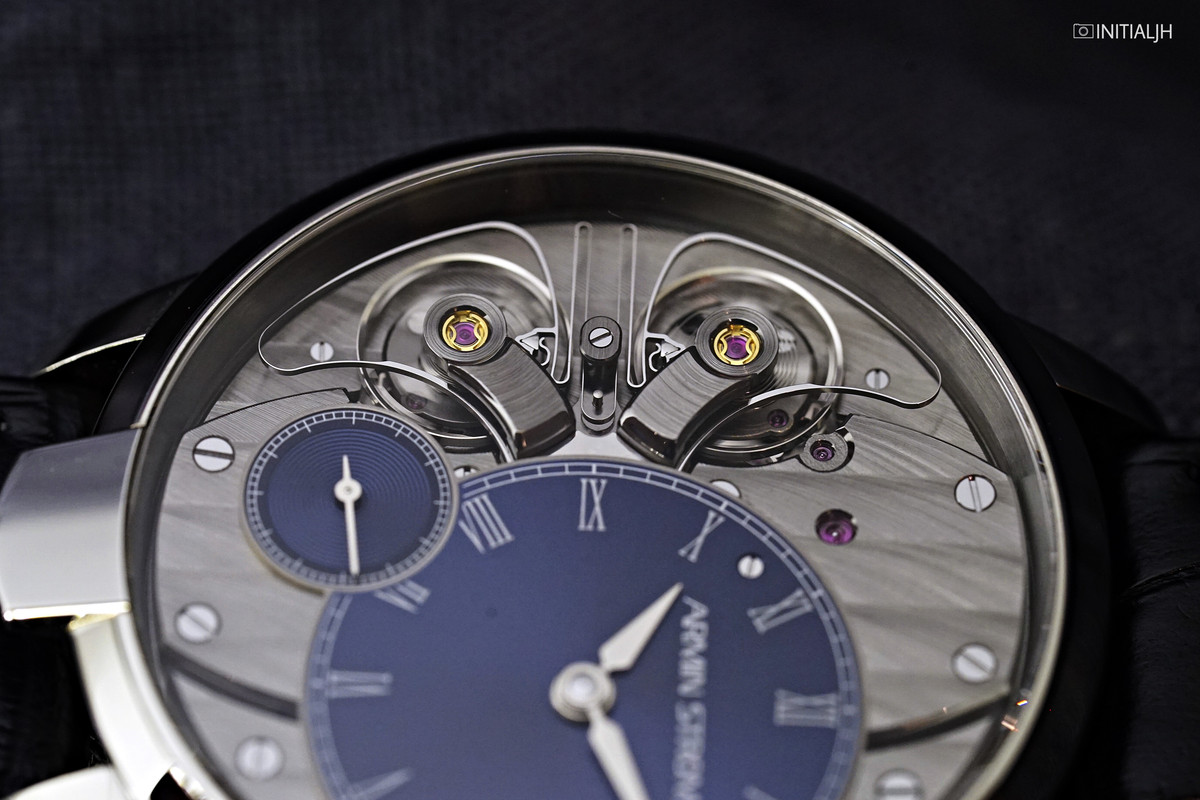 The Calibre ARF15 used in the earlier watch was redesigned so that the time displays receive energy from the lower regulator, whilst the upper regulator creates resonance. The regulators take pride of place. As well, the flyback mechanism of the ARF15 was removed and replaced with a small seconds sub dial.

The off-centred hours and minutes dial has silver or gold lance-shaped hands with silver or gold printed Roman numerals with a white railroad minute track, on either a blue or black sunburst dial. The small seconds sub dial has a snailed dial in blue or black, with a baton hand and railroad track. 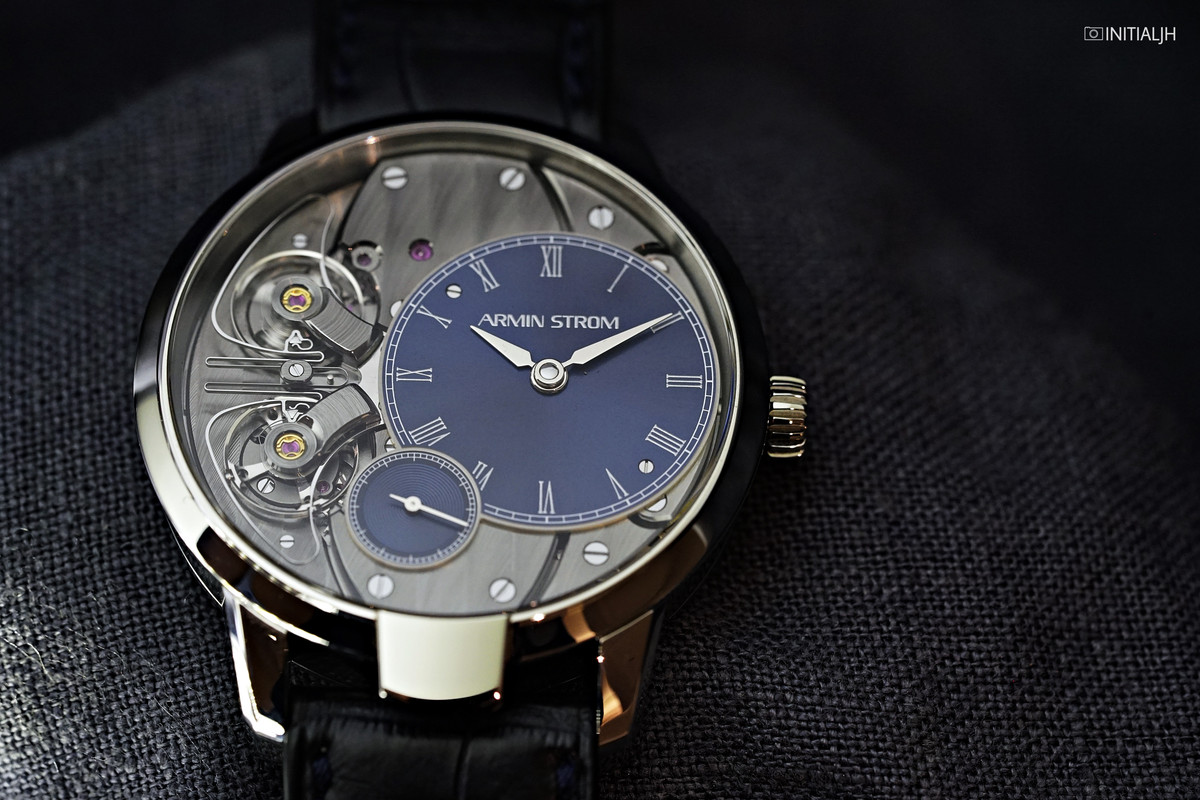 The new Pure Resonance is in a slimmer and smaller 42mm stainless steel (‘Water’) or 18 carat rose gold (‘Fire’) case (1.8mm smaller than the previous version), courtesy of the reduced lugs and crown and a minimal bezel, though the characteristic lip at 6 o’clock remains. 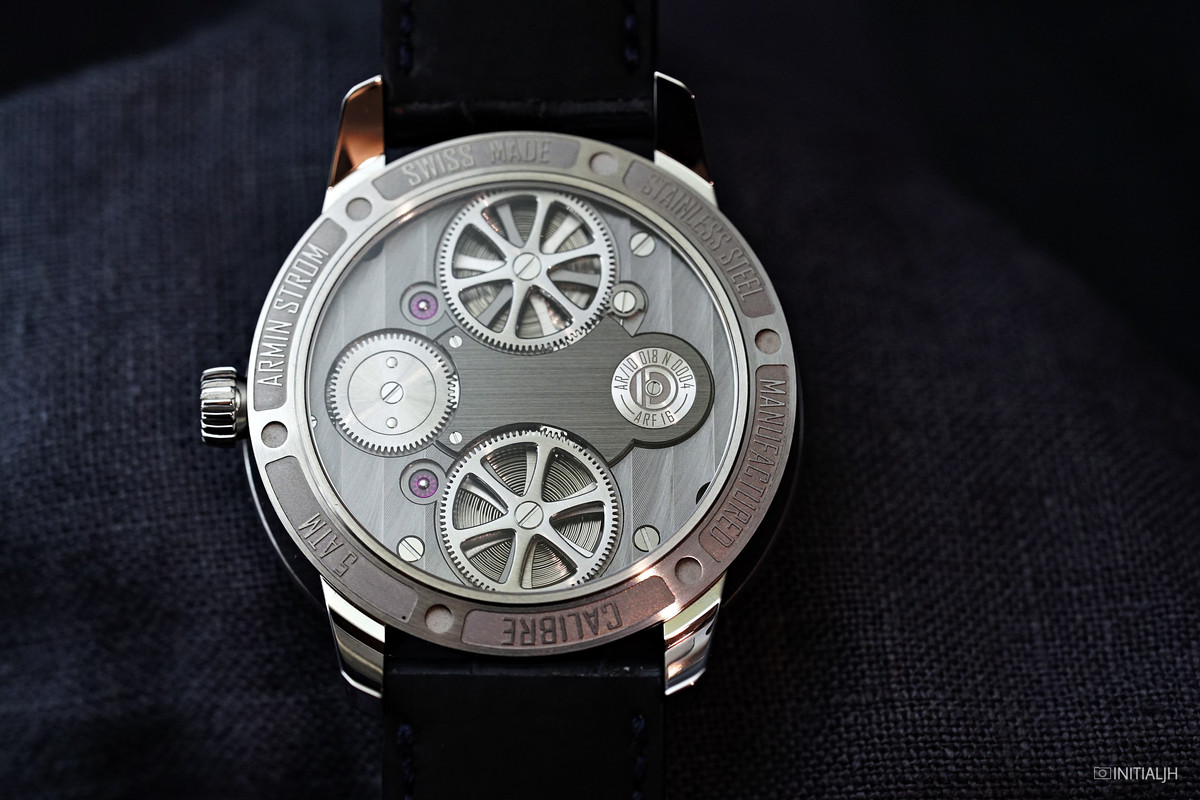 Both of the models come on black alligator hornback straps with either a stainless steel buckle or rose gold ardillon buckle. There is also a black rubber strap that comes with the watch, with a matching metal double folding clasp option available.