Today’s post is about a watch from the early 1960s. A vintage Universal Genève Polerouter of no particular individual horological historical importance, it is a watch whose existence only recently became known to me.

It belonged to my late grandfather, who died quite a few years ago.

A year later, Universal introduced wristwatches with a chronograph function and 30-minute recorder, and in these early years, their growth went beyond Europe, finding success in North and South America. In 1919, Universal moved from Le Locle to Geneva. By this time, my grandfather was in primary school.

The 1920s brought with it a new automatic movement from Universal that had an oscillating weight with ‘spring buffers’, used in their ‘Auto-Rem’ model, and continued growth.

Unfortunately, in 1933, Perret died, but his position within the company was taken over by his son Raoul, who promptly changed the brand to ‘Universal Watch Co Ltd. Genève’ within a year, released their first chronograph the next year, then a chronograph with two registers (the second a 12-hour one), and moved the entire company to Rue du Rhône (even now still a hotbed of watch boutiques) in Geneva in 1935.

He was a hive of activity, registering the brand name ‘Universal Genève’, introducing a new logo, and ushering in a period of worldwide growth that lead to the building of a second factory that focused on satisfying the demand for chronographs.

In 1947 Louis-Edouard Berthoud died, and Universal Genève launched a new automatic movement called the Calibre 138. By this time, my grandfather was married with two children.

The company, as they say, went ‘onward and upwards’ into the 1950s, which brought with it a new main factory in Geneva.

In 1954 the ‘Polarouter’ model (later to become the ‘Polerouter’) was born. The creation of the then twenty-three year old Gérald Genta, who would go on to become a giant in the horological world, it was powered by the Calibre UG 138 SS.

On April 15, 1954, the SAS airline flew its first commercial flight from Europe to the United States over the North Pole. The pilots on this and subsequent flights were issued with Polarouters, chosen for their anti-magnetic properties. Why was this important to the SAS management? Well they were concerned about whether the pilots’ watches would be influenced by the polar magnetic field.

The Polarouter was a huge success. In 1955 Universal Genève released the Calibre UG 215 (for which they would be granted a patent in 1958, after having filed patent n° 329805 on May 27, 1955), an automatic watch with a micro rotor which was revolutionary not just because it was the thinnest automatic movement of its time, and also because it had a small (micro) rotor incorporated into the movement. It also found its way into the second generation Polarouters, which were now called the ‘Polerouter’.

Humming at 18,000 VPH and with a power reserve of almost forty-eight hours, the UG 215 had only hours and minutes functions, was 28mm in diametre, and 4.10mm thick. 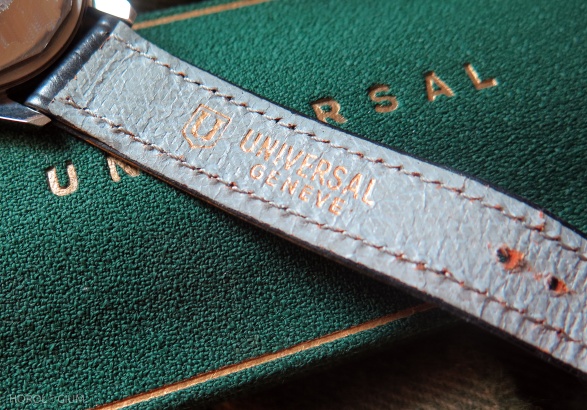 Throughout the 1950s Universal Genève continued their focus on the development of micro rotors. On January 30, 1957 they filed patent n° 330900, published on August 15, 1958, for a self-winding movement with central seconds wheel and pinion, and a micro oscillating weight integrated into the movement. The Calibre UG 215 was a three hand movement with a centre seconds. Alongside it would appear the Calibre UG 215.1, 5.15mm thick with a same hour/ minutes/ seconds, but with the addition of a date disc. Calibre UG 215.2 was also, at 4.70mm, 0.45mm slimmer.

The Calibre UG 215.2 would be replaced by the Calibre UG 218.2, 4.70mm thick, measuring 28mm in diametre, and with a date function. Its primary improvement of note was the ability to make fine adjustments via an adjustment screw on the balance cock. This too, would find its way into Polerouters. 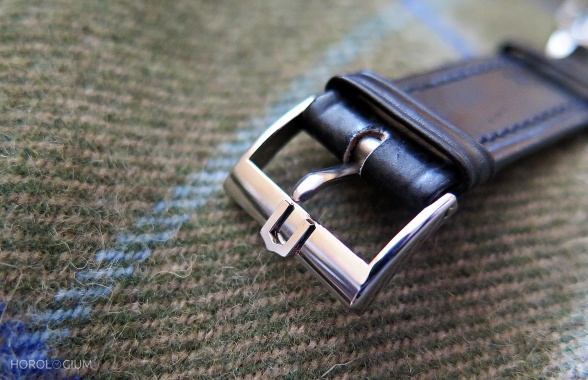 This was then followed by the Calibre UG 69, which was the Calibre UG 68 with the addition of a date disc, with a thickness of 4.70mm. The development of UG 66 Calibres continued through the 1960s in various iterations, and Calibre UG 66 became UG 1-66.

In the decade after its launch there were many versions of the Polerouter, both with and without the micro rotor. The early ones, SAS ones, are obviously the most collectible, but there is nonetheless an enduring affection amongst many for these watches.

This Polerouter that belonged to my grandfather has not been opened since it was found (in fact I doubt that it has ever been opened), and as it is not my decision to make, I do not know when it will be opened and checked. In any event, it is working without any discernible issues.

It was presented to him in 1963, and I can’t say whether it contains the UG 215, UG 218, or the UG 66. To be honest, it doesn’t really matter to me; this is not what is personally significant about this watch.

When I first saw it, I marveled at its remarkable condition – no marks on the case back, the ‘gift engraving’ (some of which I have blurred out below) still sharp. On its scarcely worn strap and in a new looking box, my first thought was that he probably (as was the case with an even older watch of his that I now wear) simply put it in a box after a few day trips on his wrist, and forgot about it. There are some age-related spots on the dial and marks on the hands, but apart from that, it’s in pretty good condition.

When it was given to him in 1963 by the civil service department for which he worked, this was during a golden period for Universal. The department would have wanted to choose something of a certain level of quality, a brand that was recognisable but also not flashy (we are talking about the government after all), something with longevity, and something that would reflect an appreciation of a long period of service.

For me, it is in the choosing of this particular watch that there is a perhaps a symbol of how important Universal was in its heyday. It may be a brand that is now unknown by most of the watch-wearing public, its admiration restricted to those with an interest in movements and vintage watches, but it was not always thus.

I first heard about Polerouters from Horologium photographer @initialjh, who once had a small collection. It is in no small part due to his enthusiasm for them that I am able to appreciate this watch not just as something by which I can remember my grandfather, but also for its small place within the modern history of watchmaking.