In 1958 Jaeger-LeCoultre commemorated the International Geophysical Year by creating a robust utilitarian watch that was protected against magnetic fields (600 gauss), shock and water resistant, and extremely accurate. Fitted with Jaeger-LeCoultre Calibre 478b, the Geophysic chronometer was presented to the commanders of the Nautilus and Skate, the first atomic submarines to go under the North Pole, with a gold Geophysic chronometer specially engraved for the occasion. Only 1,290 of these were made, and it remains a highly desirable and sought after piece.

Jaeger-LeCoultre’s modern Geophysic started in 2014 with, naturally, limited edition releases which was clearly targeted at those who are interested in the original. The Geophysic 1958, as it was called, was followed, in 2015, by the Geophysic True Second and Geophysic Universal Time, as the homage models became the basis of a new line. 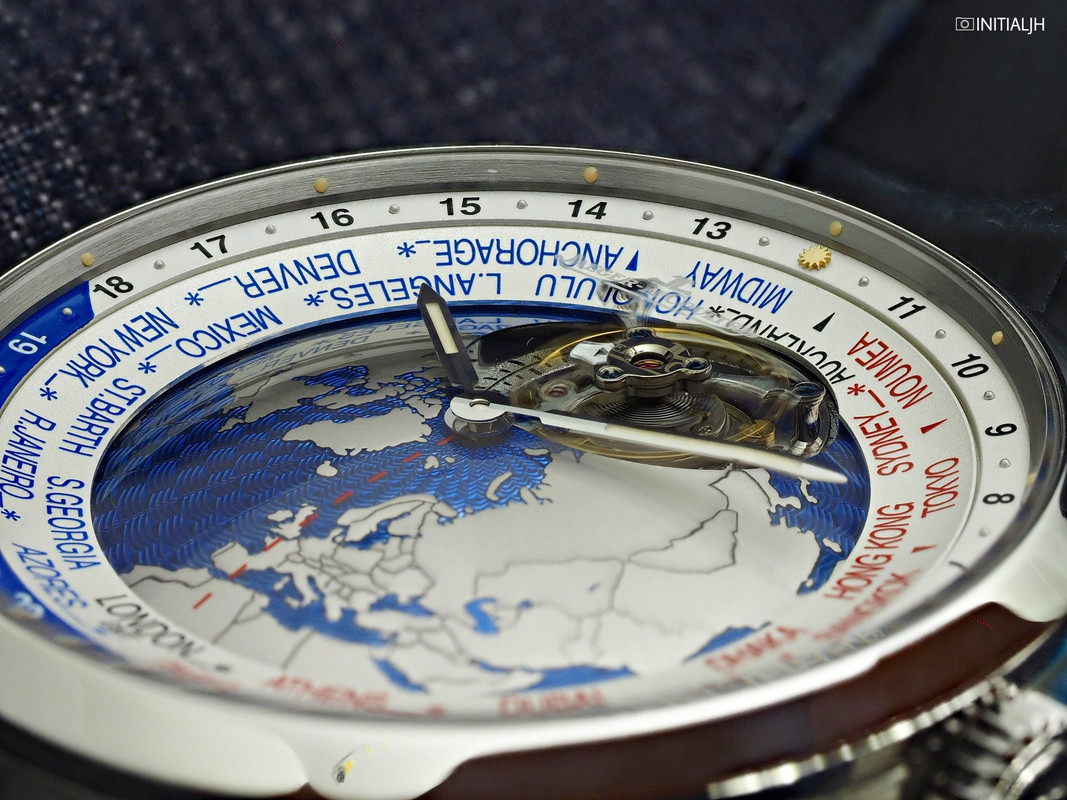 The new model, limited to 100 pieces, is the first time that Jaeger-LeCoultre have paired a flying tourbillon with a world-timer, and features a new in-house movement, the automatic Calibre 948, in the 43.5mm platinum case. You can see the movement through the case back, with its solid gold monobloc rotor. It beats at 28,800 VPH and has a power reserve of forty-eight hours. 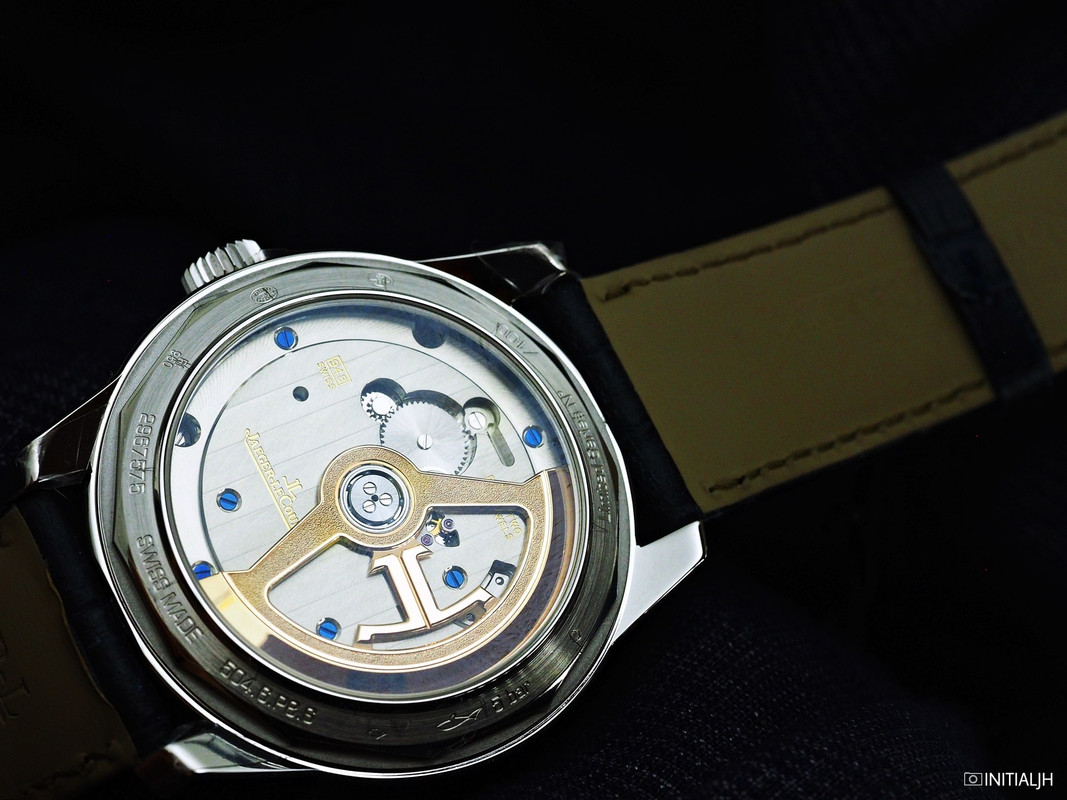 Beneath the domed sapphire crystal and surrounded by a world time ring is a slightly convex view of the now familiar ‘Geophysic Earth’, with engraved blue lacquered oceans, with guilloché waves, and satin-brushed continents. Around the perimeter of the dial are cities in blue and red lettering. Greenwich Mean Time is indicated via a red dashed line. The line with an asterisk next to a city (and there are twenty-four cities in total) is a quick easy-to-read way of indicating winter and summer time. 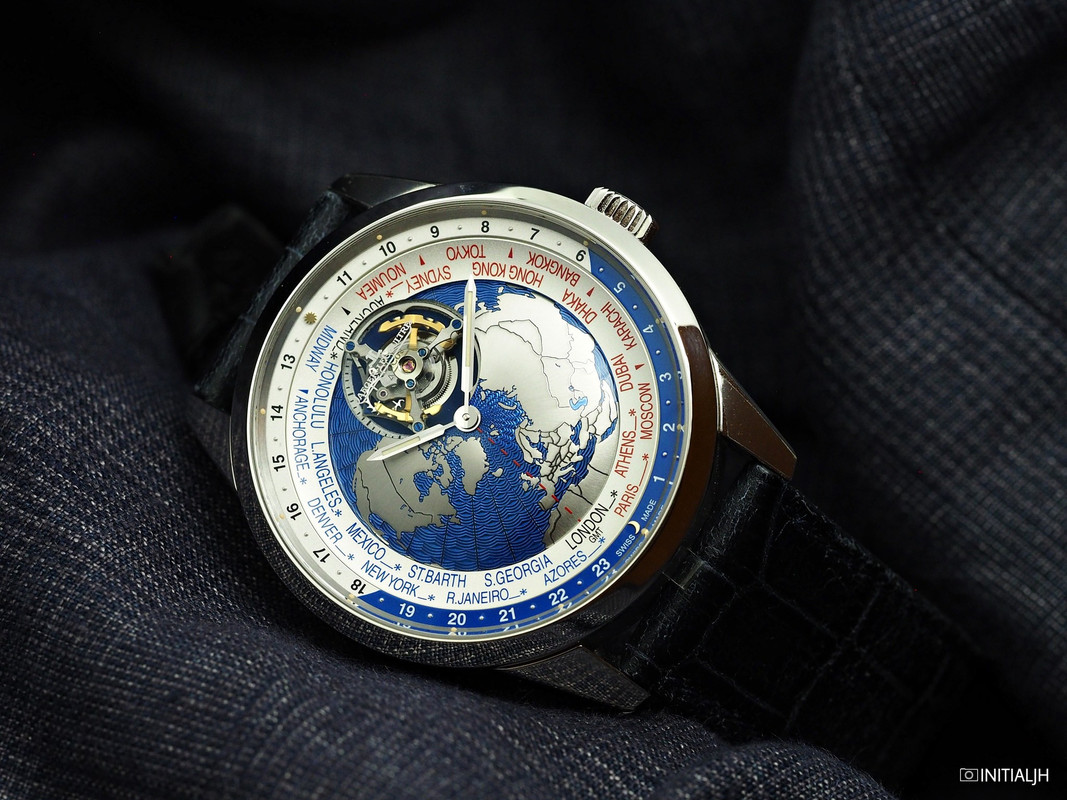 All of the watch’s functions are set by a single crown. You set the hour by one-hour jumps clockwise or anti-clockwise. When travelling, only the relevant hour needs to be adjusted. You don’t have to re-synchronise cities, the earth and cities do not move. Once you set the world timer, that’s it. The time zones are always the same, all that changes is your reference time zone.

Water-resistant to 50m, it comes on a blue alligator leather strap with a white-gold folding buckle. With such a big ‘complication’ jump in the last year, it will be interesting to see new models Jaeger-LeCoultre will introduce next for the Geophysic Collection.