Many of you will recall Urwerk’s EMC – Electro Mechanical Control watch that was released a couple of years ago. For those who refresh to refresh their memories, go to our earlier post at this link.

This year Urwerk has released another version of the EMC. I hesitate to call it an ‘update’ because it isn’t really; as was explained to me by Urwerk, the creation of this new piece was in part due to their clients’ requests regarding the EMC.

The original EMC and EMC Time Hunter are hybrids, with fully mechanical (manual-wind in this case) movements but with an electronic addition that allows for the monitoring of the watch’s performance (in this instance, amplitude and precision).

This new model comes in two versions, both with a combination of satin and bead-blasted finishing. The first version comes in Grade 5 titanium/ steel and the one we are covering here, in green ceramic-coated Grade 5 titanium/ steel. Its dimensions are 51mm (length) x 43mm (width) x 15.8mm (height), identical to its EMC predecessor.

The Time Hunter’s dial is more simple than that of the EMC, featuring a central hours and minutes indicated by high-contrast black hands treated with white Super-LumiNova. A rotating disk displays seconds at 1 o’clock and the power reserve indicator is located at 7 o’clock. Both blue and white Super-LumiNova are used. 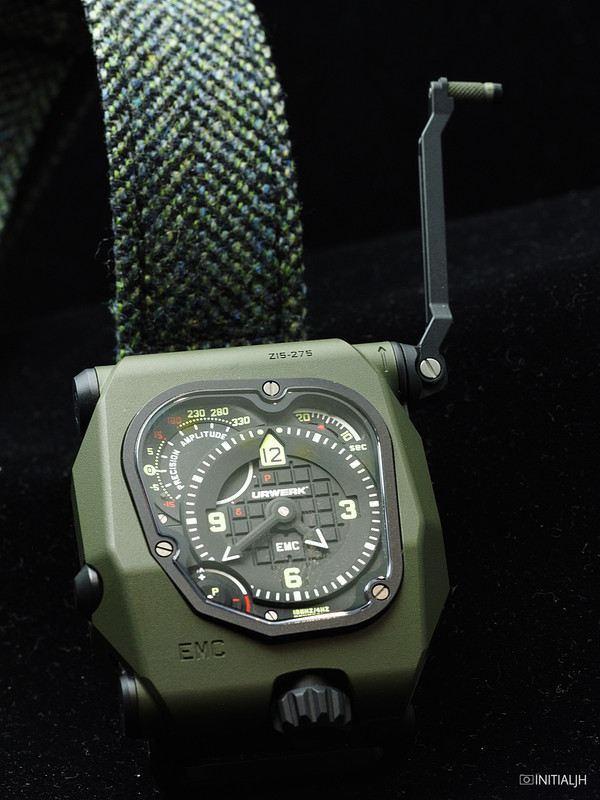 The dial in the top left corner at 10 o’clock displays the two EMC electronic indications: timekeeping precision to +/- 15 seconds per day and the amplitude of the balance. These are the key to this new watch.

Via the use of a monitoring system the EMC Time Hunter (and its predecessor) shows the wearer how many seconds the watch gains or loses in a day. With the aid of a screw in the case back, it can be adjusted (faster/ slower).

You will note that the EMC has ‘precision’ on its dial whereas the Time Hunter has the addition of ‘amplitude’. A new feature to the Time Hunter is that amplitude is now monitored as well. In a watch sense, amplitude is how far in degrees the balance wheel moves through each oscillation. The balance in most watch movements should oscillate between 220° and 280° for maximum efficiency.

Degradation in the lubricating oil of the balance staff manifests in lower amplitude, which is why monitoring amplitude has been used as an indicator of whether the watch needs servicing.

Inside is the in-house Calibre UR-EMC2 with the integrated circuit board that forms the ‘E’ part of the name. The top of one of the two mainspring barrels near the crown, and the top of the balance wheel and optical sensor (which is controlled by the board) on the winding handle side.

The manual-wind movement features a bespoke balance wheel made of ARCAP, an anti-magnetic alloy in a linear shape which Urwerk say is to optimise aerodynamic efficiency, minimise loss of amplitude, and to facilitate calculations from the optical sensor. It also has a double barrel that provides 80 hours of power reserve, Côtes de Genève, snailing, micro-bead blasting. 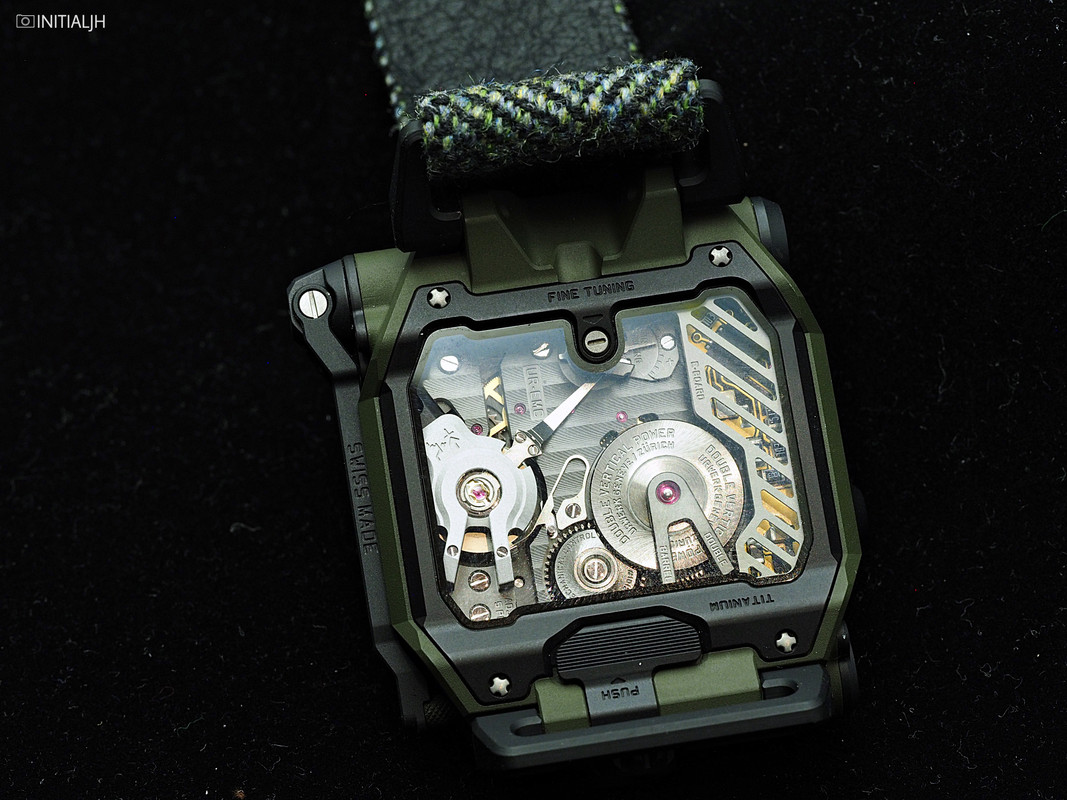 As is the case for the EMC Mk1, the Time Hunter has the Maxon® generator with manual winding charging super capacitor. A micro generator controls the computer component; all data is transferred via an optical reader that is situated on top of the balance wheel and captures the rate of oscillation. The sensor consists of a transmitter and a receiver and is connected to a 16,000,000 Hz (16 MHz) electronic oscillator and circuit board that calculates the difference between the movement and oscillator, capturing the precise rate of oscillation of the 28,800VPH (4 Hz) regulator over a period of 3 seconds.

The monitoring function of the Time Hunter is powered by a hand-operated generator which charges a capacitor. You use the fold-out lever/ handle to power up the micro generator that powers the precision indicator.

The micro motor then powers the hands that indicate either δ (processing underway) or P (not enough power), then the movement’s precision to +/- 15 seconds per day, followed by the amplitude. There is a button on the left side of the watch to activate both the indicators for testing. A green LED light appears if all is good (accurate) and a red LED light if one/ both of the indicators fall outside acceptable parameters.

On the back of the watch is the crown plus the screw for post-testing precision modifications; it lets the wearer make find adjustments to the balance rate regulator by changing the active length of the balance spring. 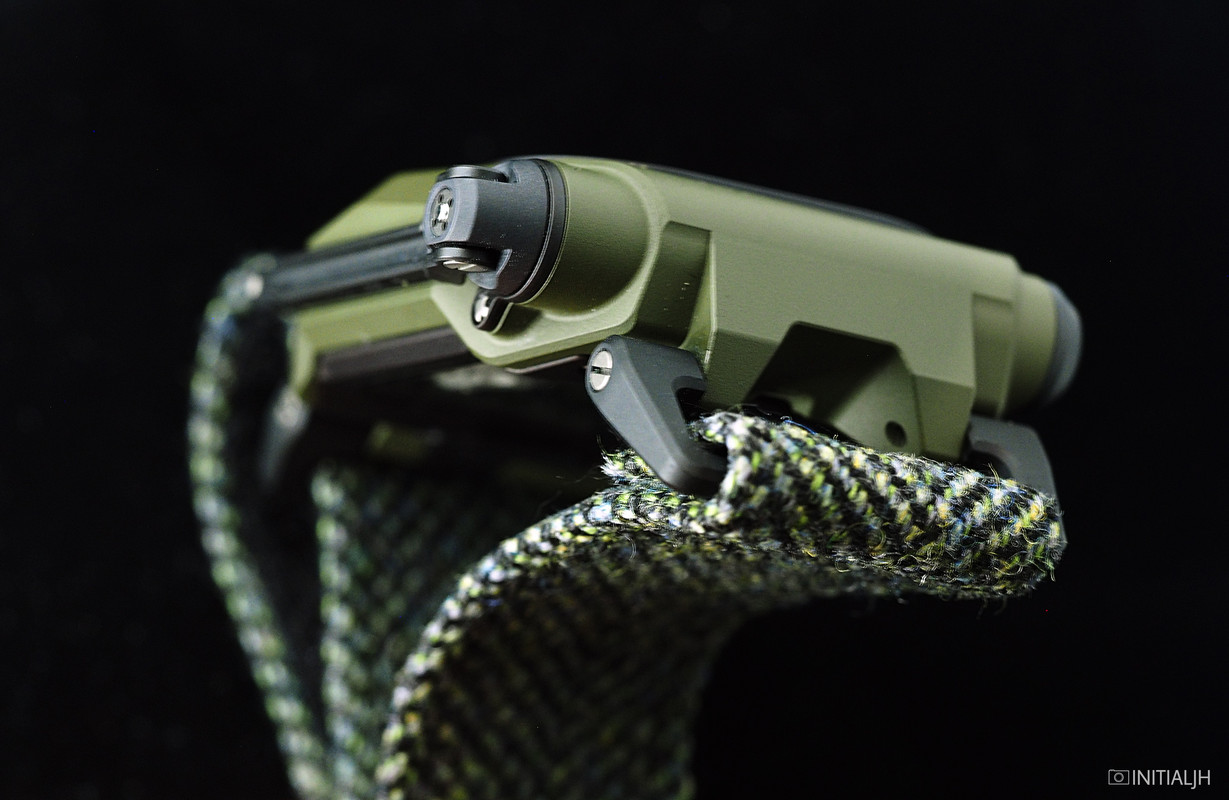 The EMC Time Hunter isn’t just an update of the older EMC. It’s also a fraction easier to read, with the four sub dials now gone. With a large time display dominating the dial, the new Time Hunter (case notwithstanding) looks a bit more ‘traditional’ insofar as an Urwerk can be traditional.

So how much will this latest funky Urwerk you back?