Increasingly, watch enthusiasts find themselves looking for something special, something different to the big brands, to add to their collections. Independent watchmakers offering and tailoring to these other demands are increasing, and today we bring you one of them – Hentschel, who hail from the old German port city of Hamburg.

A critical part of naval, exploration, horological and indeed world history, and what revolutionised sea-travel, were the development and refinement of the marine chronometers by John Harrison and Le Roy (separately) in the 18th century.

So where does Hamburg come into this? In the mid 19th century it became an increasingly important port city, and with increasing demand for marine chronometers  came the desire of Hanseatic ship-owners to be less reliant on foreign chronometers (namely the British). This lead to the founding of the German Naval Observatory in Hamburg, in 1875. With a goal of promoting the independence and international competitiveness of chronometer manufacturers in Germany high on their list of priorities, the Observatory organised and set the standards annual chronometer competitions, which commenced in 1877.

Hentschel (after founder Andreas Hentschel) in Hamburg restarted this watchmaking tradition in 1990 with a view to providing something different for watch lovers. Depending on the model, they utilise vintage NOS (new old stock) movements or their own Cal. Werk 1. For the vintage movements, many of the parts used are either made at or for Hentschel. The degree of customisation is limited to the template of the watch, and the finishing, the choice of the movement AND the year of the movement manufacturer can be chosen by the individual owner. Photo-documentation of individual watch being assembled, from the beginning to the final product, can be requested.

A little while ago I had the pleasure of visiting Peter at Define Watches in Brisbane for my first experience with this brand, and an introduction to the H1 and H2. 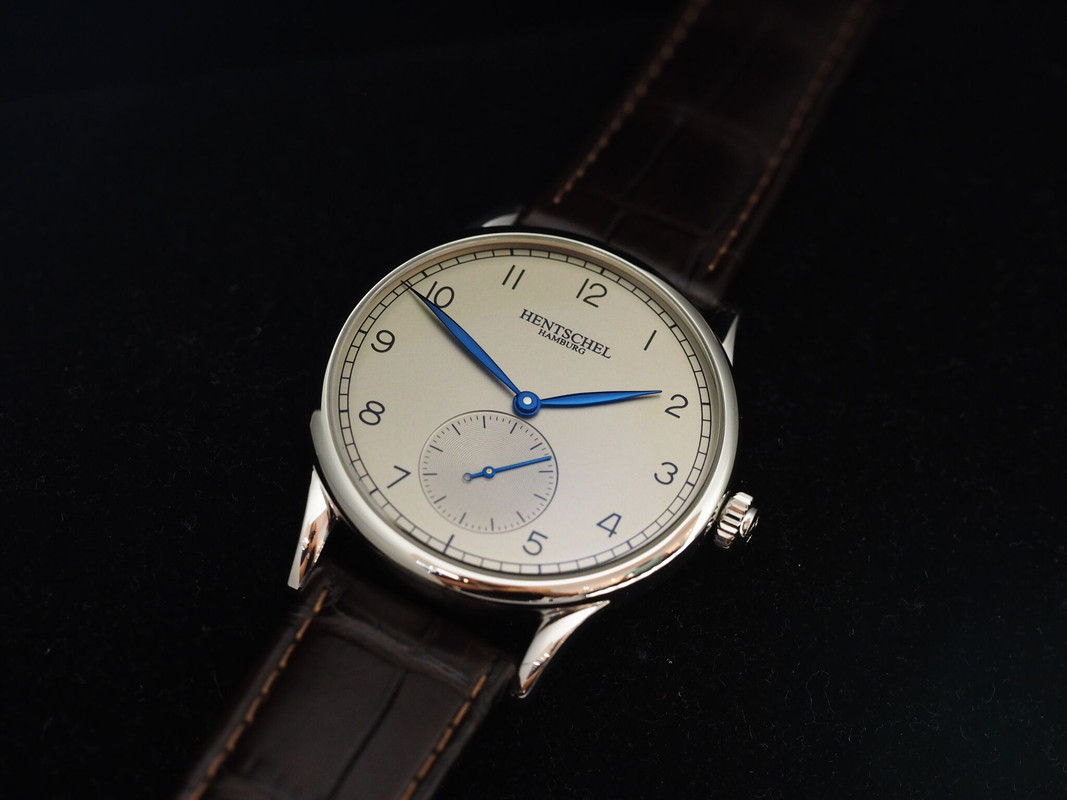 This is a very ‘under the radar’ watch, with its classical dial layout and superbly slimmed 39mm case which has a three part construction – white gold bezel, stainless steel case, white gold rim to the case back. The platinum dial and the design harks back to the marine watches of bygone era. The movement? It is a NOS movement based on the AS1130. Do not be fooled by it. Hentschel has dissembled the whole movement, cleaned, and then decorated and re-assembled the watch. The watch itself (and not just the movement) has undergone a strict chronometric standard as set in 1877 by the Hamburg Naval Institute. The result? The watch is adjusted to 6 positions, and tested for 1000 hours. 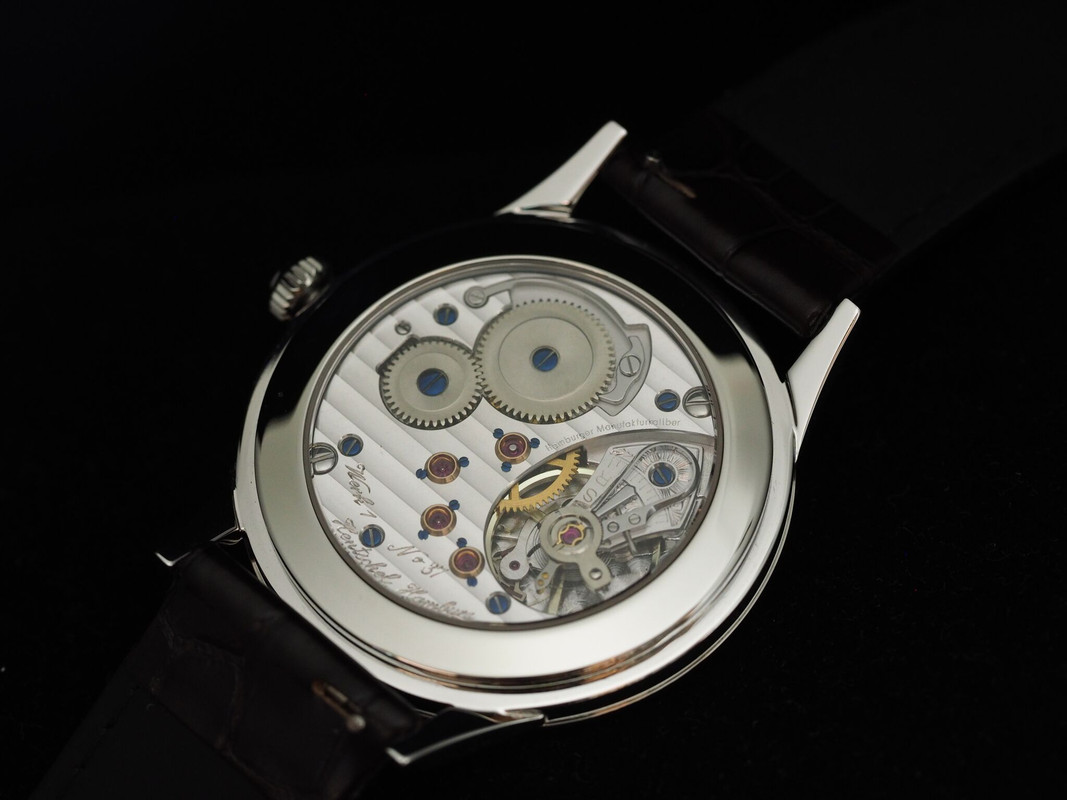 The attention to details is immediately obvious. The beautifully finished case, lovely blued hands, printing on the dial, and the heft and weight of the watch. The platinum dial, in certain lighting and angles, gives a certain warmth not seen in other dials. Flipping the watch around, the AS-base movement does not resemble the original. Whilst the movement has remained the same, the finishing and upgrading of parts performed at Hentschel, for this price point, are first rate. 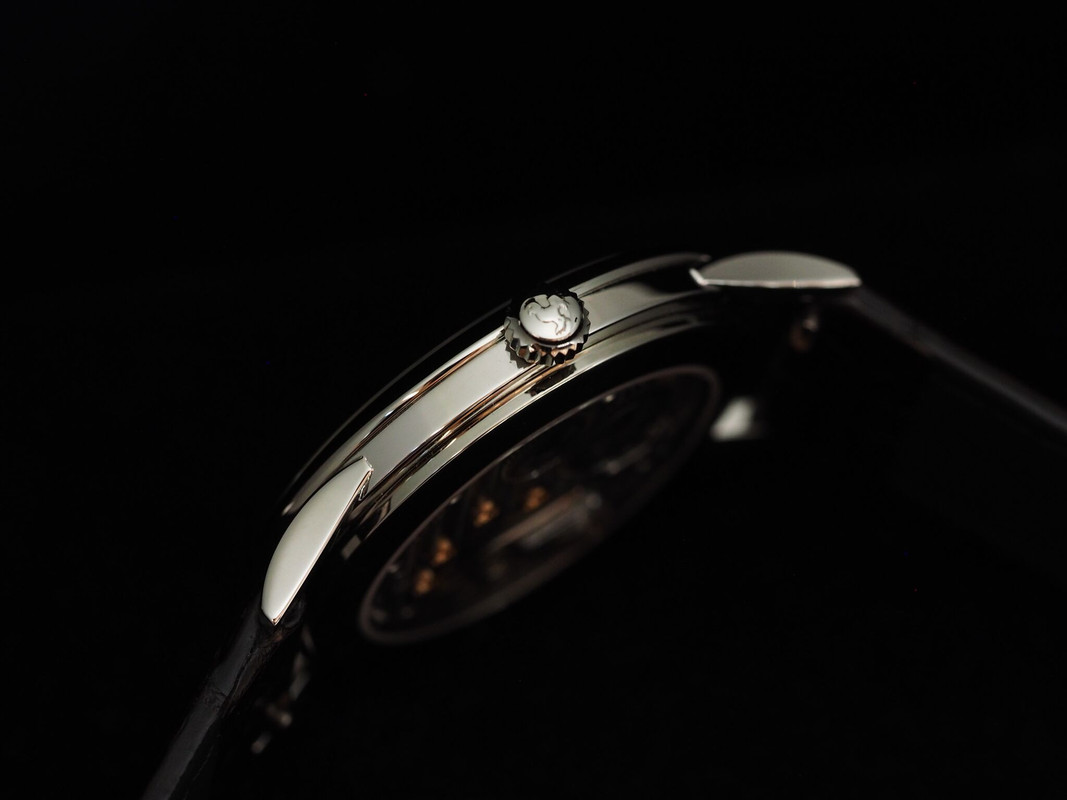 This is certainly an understated watch and definitely one for a watch enthusiasts who wants something different, understated and yet, top quality. The Australian price is AUD24,820.00 incl. GST

The second watch is one that really caught my attention. The H2 Ambassador in a 38.5mm marine bronze case. As opposed to bronze alloys where oxidation and ‘patina’ development can occur, the case of the H2 is made from marine-grade bronze, which is intended to minimise how much the colour will change. I love the utilisation of this alloy as it gives the warmth of rose gold, the heft of rose gold, without the price of rose gold or the oxidation we see in other bronze-based watches (read this link about the latest Tudor bronze-case watches with non-corrosive oriented bronze). 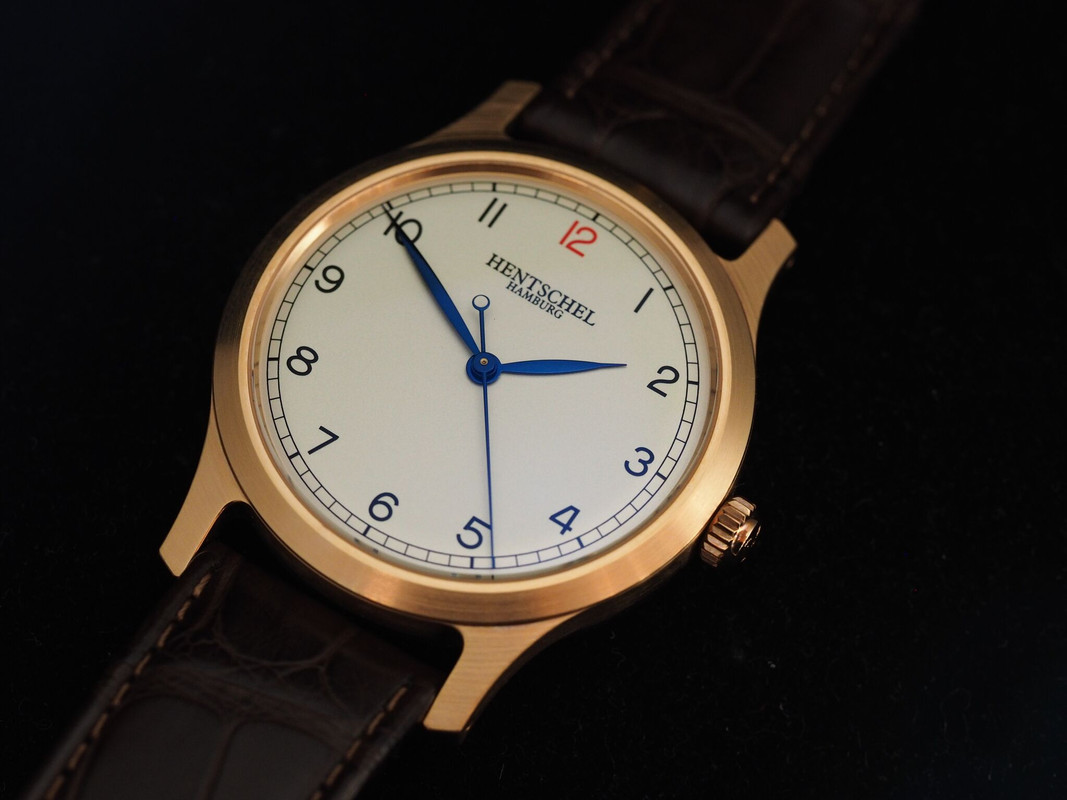 With the still-going fascination with bronze from the other manufacturers the use of this type of marine bronze is certainly a welcome alternative to these other alloys, and something unheard of from a small independent brand. 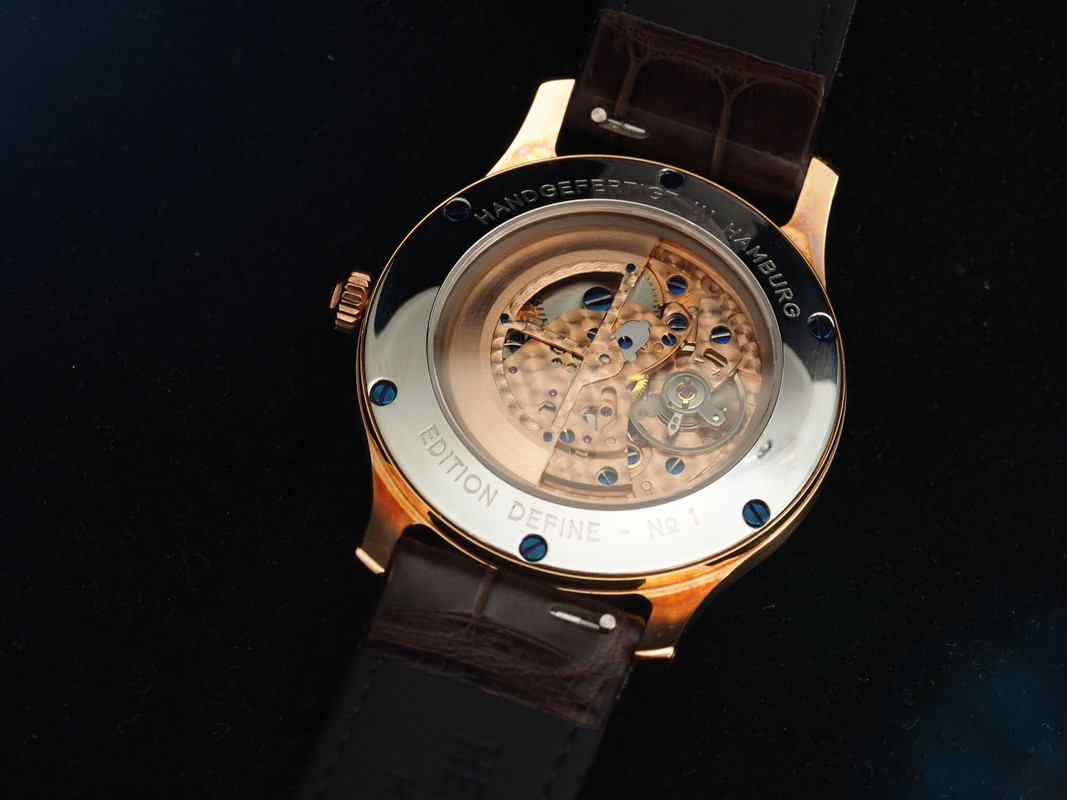 The movement of the H2 is based on an old German-made movement from the 1960s, the HB313, ‘HB’ referring to ‘Hermann Becker’. The movement has had a manufactory upgrade to ensure reliability as well as decreased friction and wear, and Hentschel have also added sunburst and perlage finishing, flame-blued screws, and a hand-skeletonised rotor. 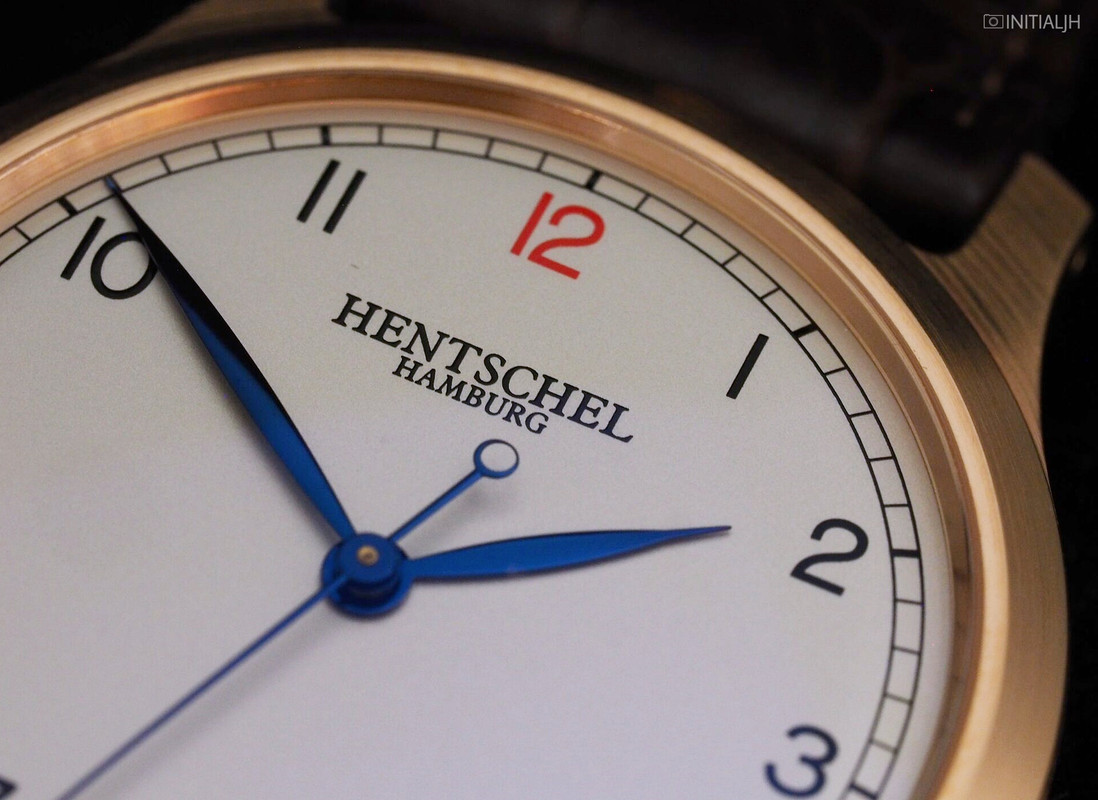 The dial features a lovely red 12, and overall, it is an aesthetically pleasing watch that is quality for the price point – AUD 8,975.00 incl. GST.

I would like to thank Peter of Define Watches for his time and for allowing me to explore the Hentschel brand.