Another Baselworld 2013 release by Glashütte Original this year is a new Regulator model with the classic regulator design of a centre minute display and other indicators positioned as subsidiaries. The dial is lacquered silver-grainé with the hour display at 12 o’clock, the seconds sub dial at 6 o’clock, the characteristically GO Panorama Date display at 3 o’clock, and a power reserve display at 9 o’clock.

The Senator Chronometer Regulator is driven by the manual winding Calibre 58-04 which uses a second-zero-stop-mechanism for time setting. When winding the crown, the time is stopped and the second hand jumps to zero, where it remains. At the same time, the minute hand progresses to the next full minute index. When one winds the crown to set the time, the minute hand always rests only on the full minute indices. 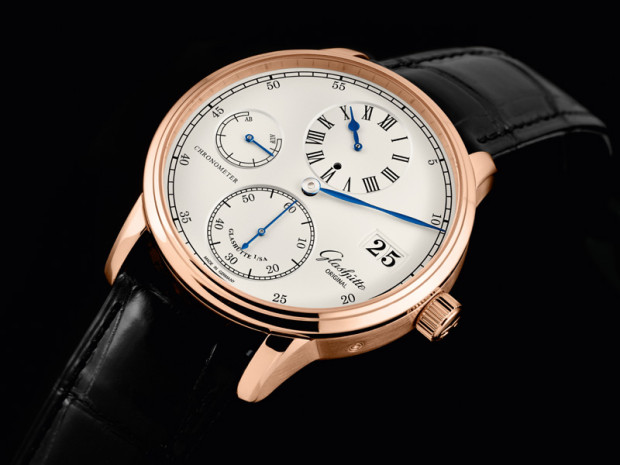 The new model has a discreet day/ night indicator at 6 o’clock in the hour sub dial. From 6am to 6pm the small circle is white. Between 6pm and 6am it is black. You may remember a recent post about another watch which had a small day/ night indicator, but for which the changeover times are 12am and 12pm. The Panorama Date display consists of black numerals painted on ivory coloured discs and the date change happens precisely at midnight.

The 42 mm case (height of 12.47mm) will be available in red or white gold. Both have sapphire crystal front and back, the latter through which you can see the three-quarter plate, bevelled edges, blued screws and the swan neck regulator. 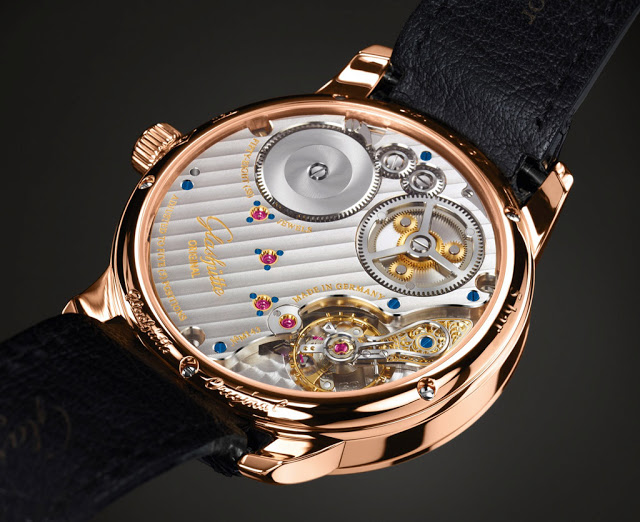 The Chronometer Regulator is officially certified by the German Calibration Service (DKD). Unlike COSC tests, which specify that each movement (sans movement) must be tested in five positions, the entire watch is tested during 15-days in Glashütte.

A number of German brands (other examples include Stowa and Dornblueth) do the classic ‘white dial and blued hands’ combination really well, in my view. What appeals to me about this new model apart from GO’s always incredibly elegant thin blued minute hand and a fondness for regulators, is the symmetry of the dial. It’s simply a beautifully balanced face.

Having said that, a wag on a certain watch forum has ‘created’ his own version, with the power reserve indicator removed and the placement of the Glashütte Original name at 9 o’clock instead.

Do you know what? The photoshopped model looks pretty good too.

Like Loading...
‹ VIDEO : Floating watches and watch repair on board the ISS
BASELWORLD 2013 : Some thoughts on Swatch’s new SISTEM 51 movement ›