Today is about a new release from Manufacture Royale called the 1770 Voltige Plume Noire (Black Feather). In order to introduce this new watch which forms part of their Baselworld 2016 releases and which we saw in January in Geneva, we must first go back a year to Baselworld 2015, where the 1770 Voltige was launched, and in so doing, provide a quick introduction to Manufacture Royale.

A brand launched in 2010, the ‘1770’ that is referenced by Manufacture Royale relates to the date on which none other than Voltaire apparently founded a pocketwatch firm called Manufacture Royale (a new angle on the literary and horological angle which has been perhaps most notably utilised by Breguet).

The current bearers of the Manufacture Royale name are in the Swiss Jura and make some very distinctive watches that are traditional with a very distinctive modern aesthetics that grabbed my attention when I saw photos of their rather large Opera model and then the Voltige 1770 last year, but it was not until this year that I managed to make my way to their January salon. 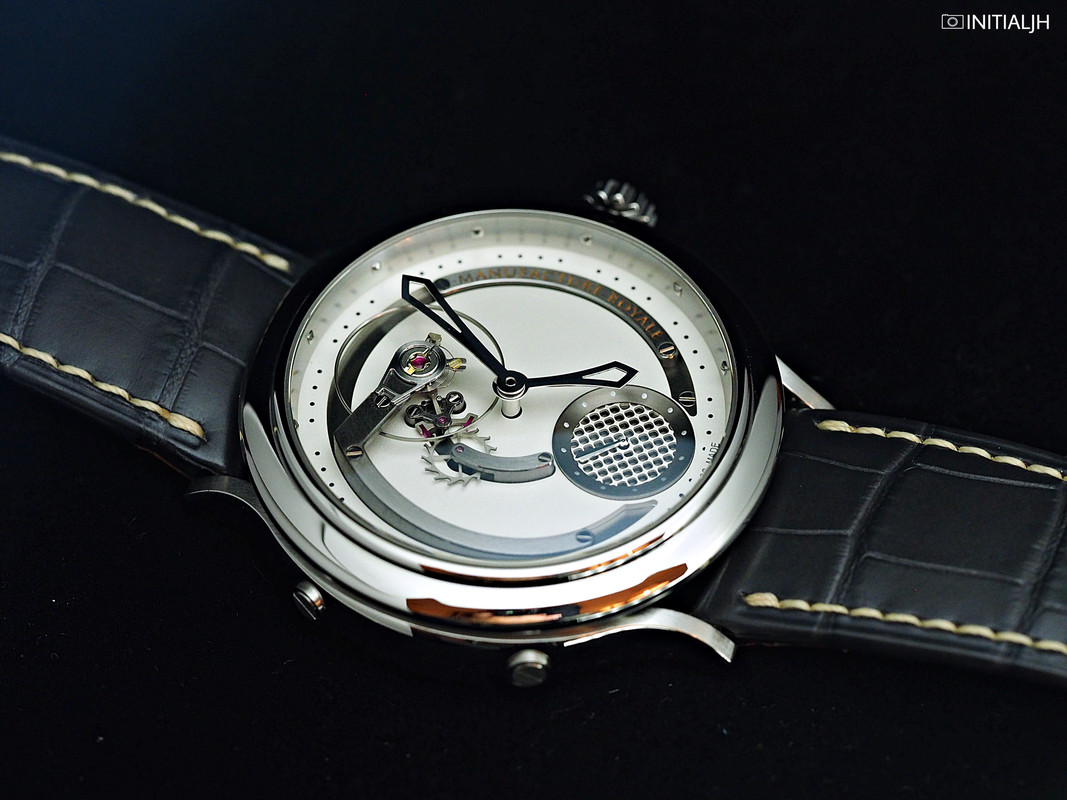 ‘Voltige’ is name inspired by ‘voltigeur’ (acrobats); an unusual name perhaps, but one that Manufacture Royale says relates to the precision, expertise and risk tasking involved in acrobatics. I like to think that it is perhaps a little about that, but more about the elevation of the watch’s heart above the dial and the huge expanse of space on the dial. 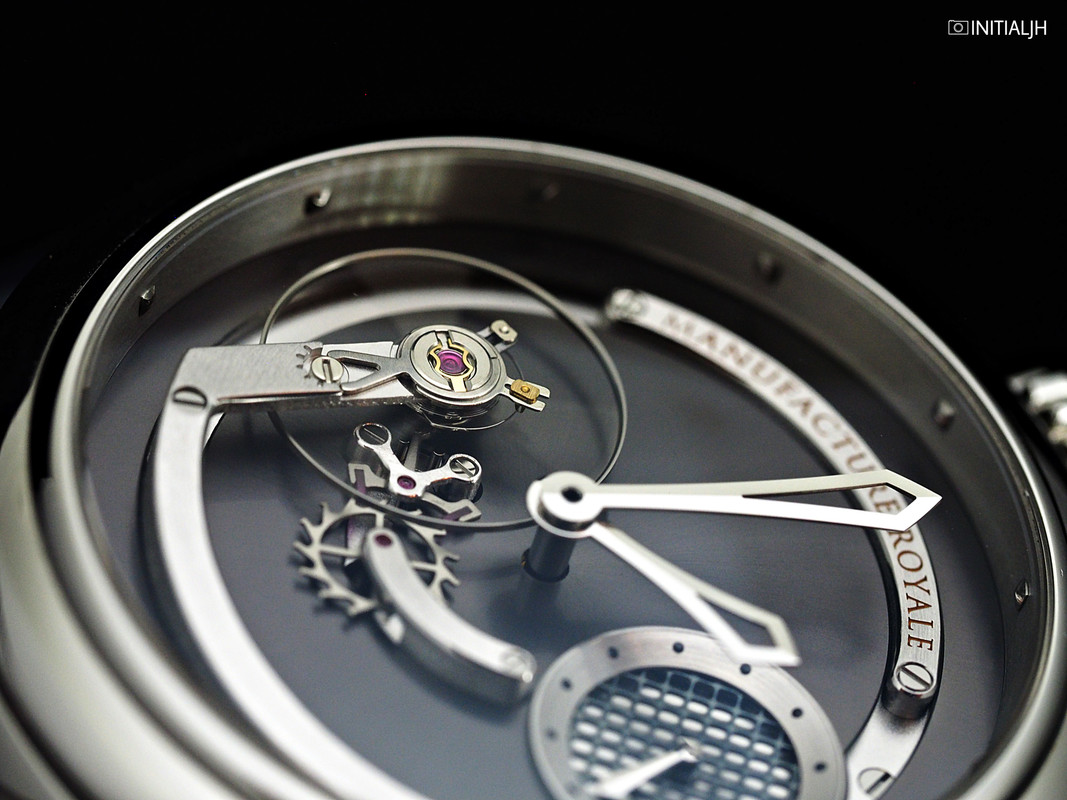 The Voltige 1770 is their entry model and thus there are no complications. Inside the 45mm x 13.8mm case (which prior to this new model came in stanless steel or rose gold) is the automatic Calibre MR05 with 40 hours of power reserve. This watch isn’t about the movement though, it’s about the attractive dial design, with both the escapement and the balance wheel up above the dial, a curved bridge that mirrors the lines of the case, and then the Manufacture Royale name which also curves, to balance the design. At 6 o’clock is the small seconds with an interesting grille/ grid decoration to it that breaks up the flatness of the dial with some visual contrast. 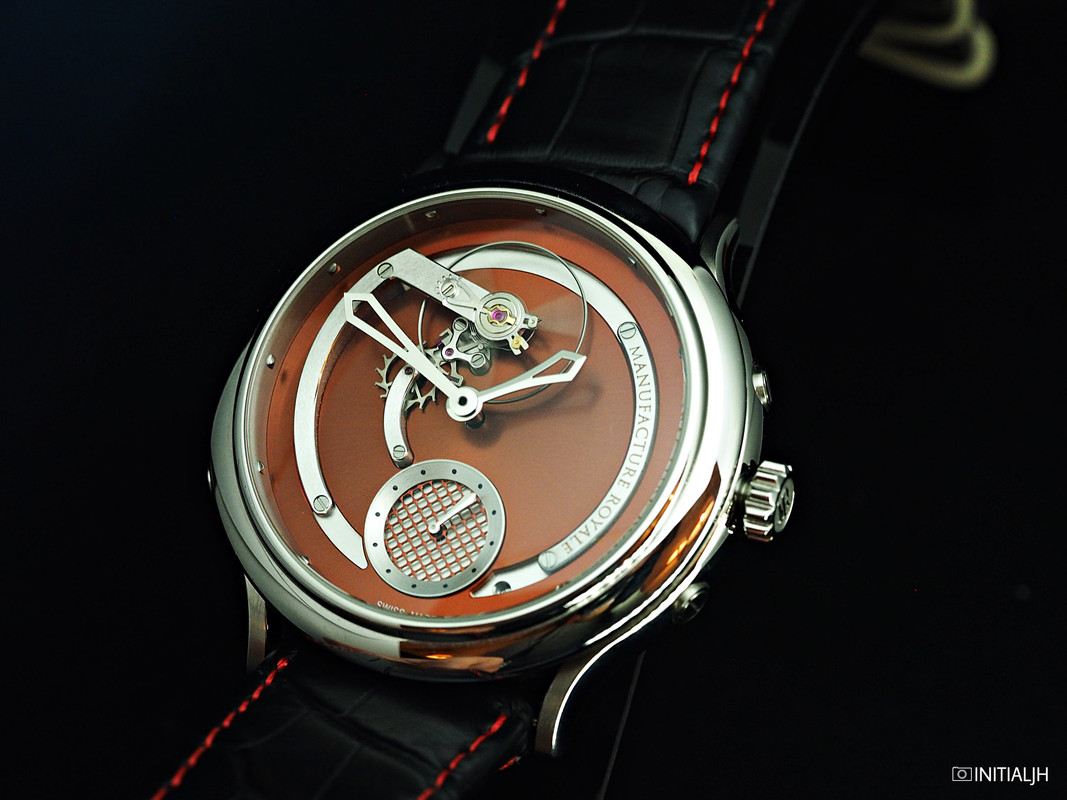 The first versions of the 1770 were in steel with either a grey anthracite or red dial or a rose gold version with a dark brown dial and priced at CHF 27,000 in steel. 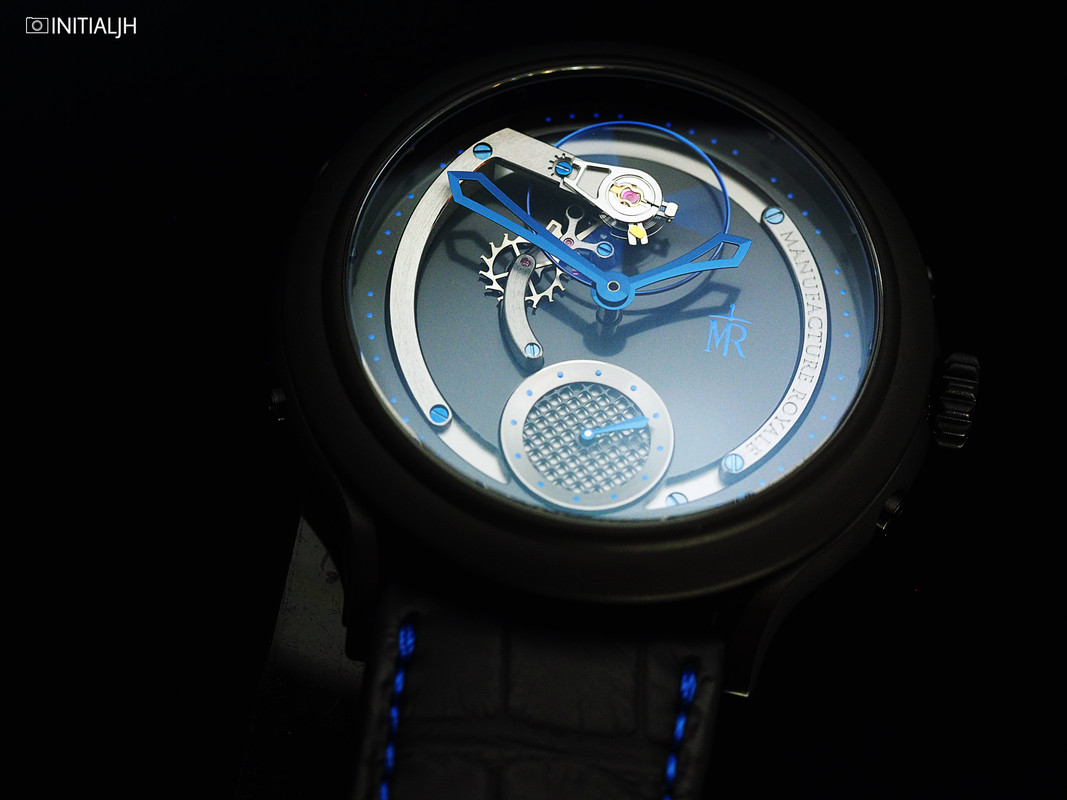 Baselworld 2016 brings us the formal launch of the Black Feather limited edition (38 pieces) which is black PVD and with striking use of blue. Its inspiration is, of course, literary – quills at dawn, if you wish to think of it that way; the literary war between Rousseau and Voltaire. It’s very modern, very sporty, and with the rather bright blue, eyecatching. It makes a change to the usual PVD and red combination more commonly seen. The price is CHF 30,800 (exc. VAT).

Although not yet a brand that is widely known, perhaps in part due to its youth and small size, Manufacture Royale is a brand with an interesting aesthetic that is worth keeping an eye on. It is also a very family-oriented business, as we found out during our visit, with even the youngest members pitching in to help out.