During Baselworld 2015 we mentioned the new Pulsometer monopusher released by Longines. As noted at the time, this follows on from a 2013 Asthmometer-Pulsometer chronograph and is one of the latest in their heritage-inspired pieces.

To briefly recap the basics, this new model is 40mm, stainless steel, and through its open case back you can see the automatic Calibre L788.2 column wheel chronograph, which has a 54-hour power reserve. Whether or not you think the case back should have been solid is a matter of personal preference.

With thanks to Longines Australia, who lent me two of this year’s new releases to have a play with (you will have to wait to see what the other one is), here are some live photos as a point of comparison to the official photos released during Baselworld. 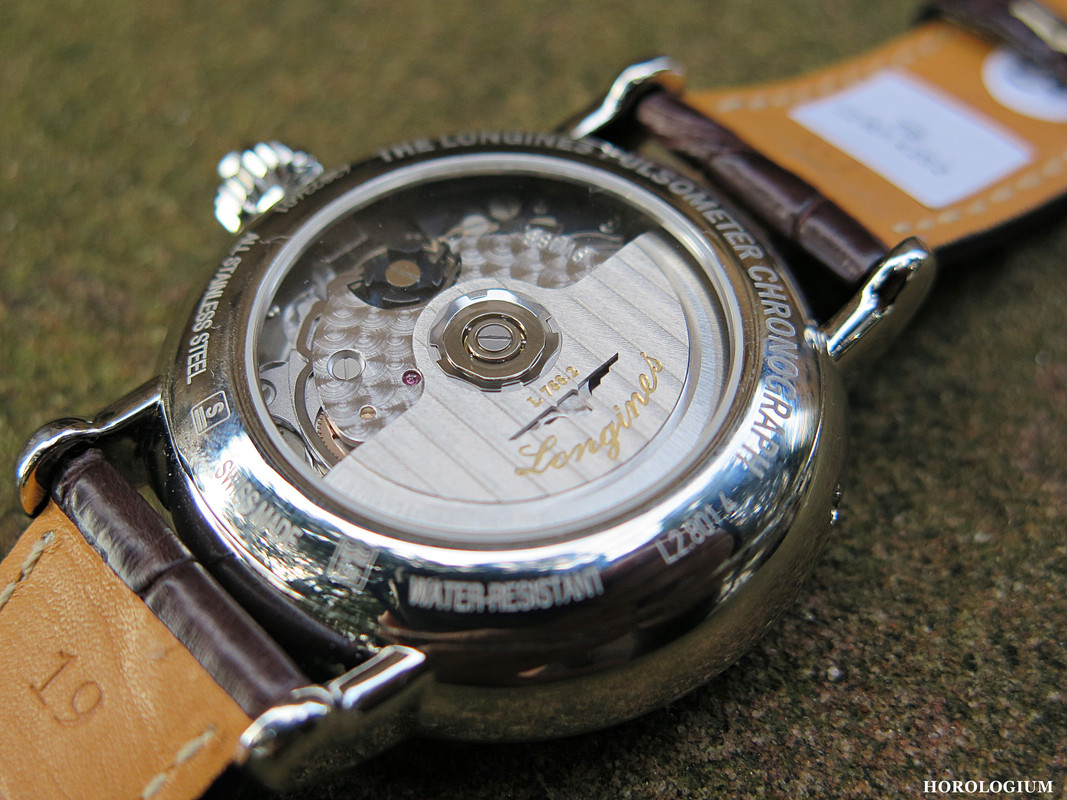 For those unfamiliar with chronographs, the centre hand is the 60-second one, there is a 30-minute counter at 3 o’clock, and seconds sub-dial at 9 o’clock.

The dial is lacquered white with the pulsometric scale in red. Arabic numerals are painted and the Breguet-style hands are blued; you will note that I found it a bit difficult to pick up this blue. One thing that immediately popped up with regards to differences between the actual watch and the photographs was that the dial is more white than in press photos. By this I mean that it is a ‘cleaner’ or sharper white. 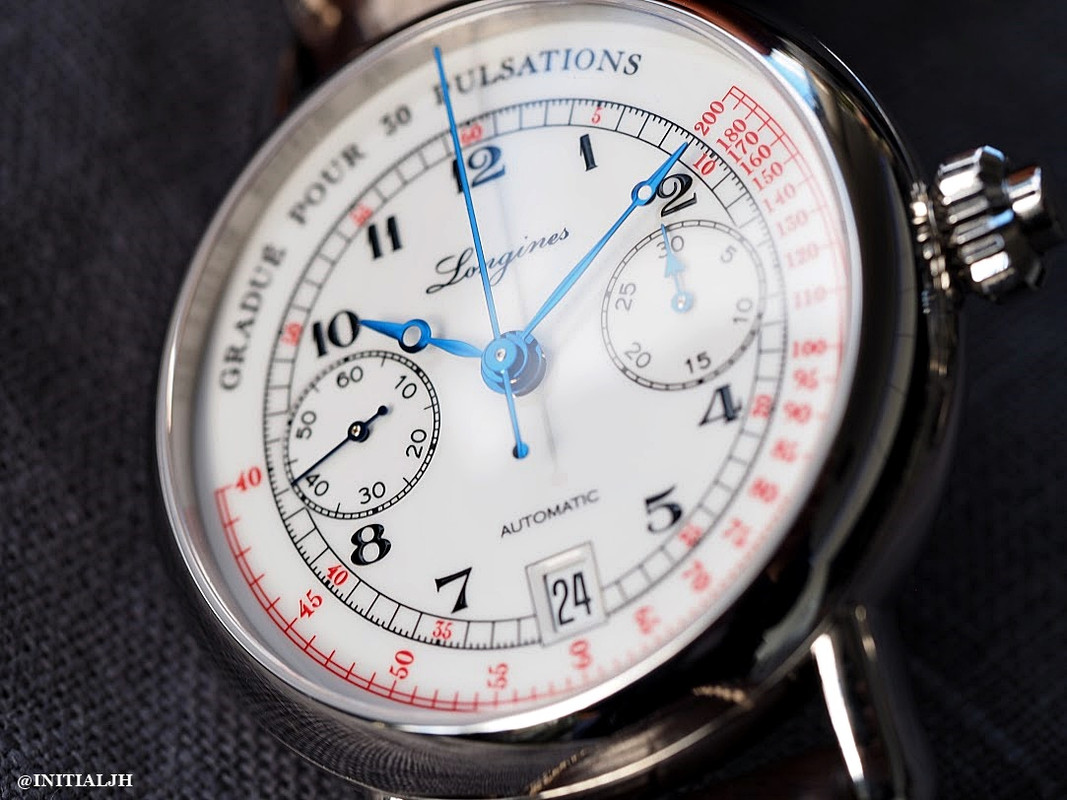 Unfortunately this was not a functioning watch, so I was unable to test the monopusher, but on this prototype depressing the button required fairly forceful pushing. 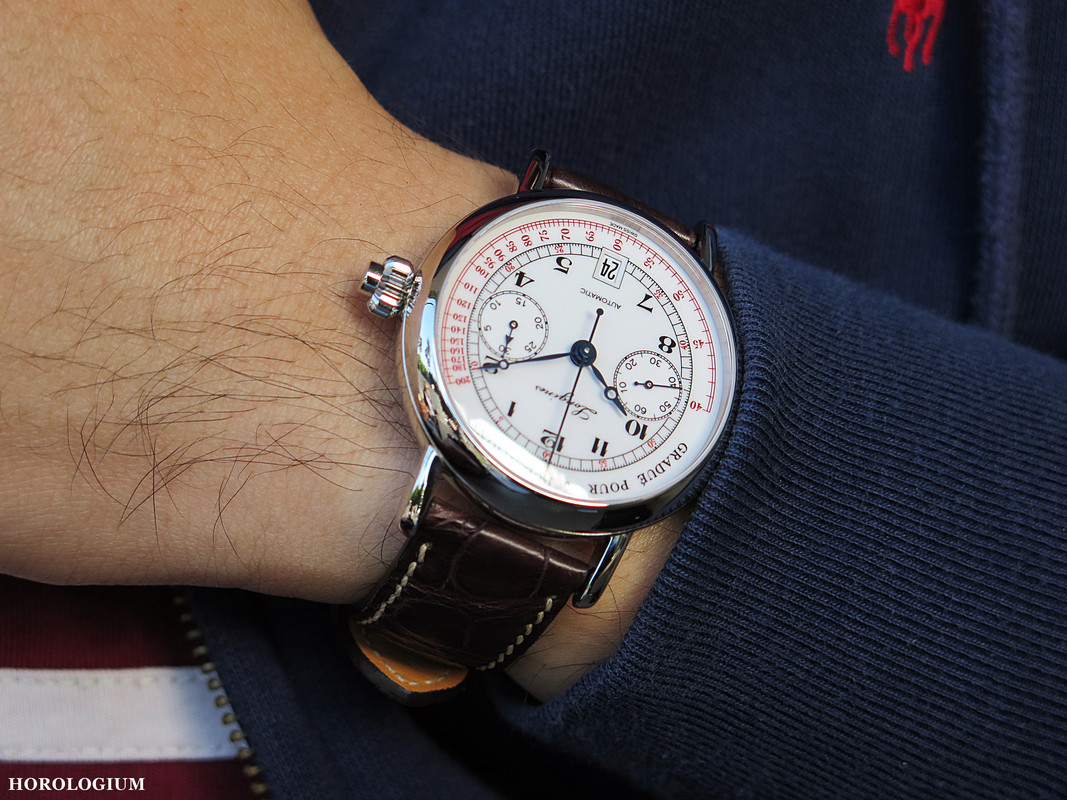 Even though it wasn’t ‘working’ as such, I wore it for a day or two to get a feel for how it sits in terms of weight and size. It has a a decent heft and height to it, but it isn’t overly big, and the lugs sit comfortably on the wrist.

The size is worth mentioning. Although it is 40mm, it looks and feels closer to 37-38mm. Why? Well the case is, in the manner of vintage pieces from which this is inspired, rounded, so there are no chunky bezels or edges to add bulk. It sits in that middle ground where those who like this sort of vintage watch homage ‘look’ but dislike modern sizing might find it worth considering.

For fans of monopushers, click here for a heritage collection 24-hour monopusher that was released by Longines last year.